Wells Coming Off Confidential List Over The Long Weekend Will Be Posted Monday -- December 27, 2015

Just a reminder. Initial production numbers for wells that have come off the confidential list this long weekend have been posted at this site. Of the wells that had not previously reported, 10 of the 11 wells went to DUC status. Of the 13 wells that were reported over the long weekend, 11 of them went to DUC status. A lot of "producing wells" will have to be reported as "producing" in today's daily activity report to suggest any chipping away of the DUCs.

I don't watch television any more as a rule. Sports is an exception, occasionally. Tonight I'm watching the Minnesota Vikings host destroy the New York Giants. Against almost any other team I would favor the Giants. It appears that tonight's game has turned into a practice session for Blair Walsh. I've lost count of the number of field goals he has hit. Without question, at least for me, the two best NFL announcers are Chris Collinsworth and Al Michaels. Al is the straight man to the very clever Chris. It's too bad folks have to grow older.

Just out of curiosity I googled a military contemporary who happens to still be on active duty. Seeing what he is still doing makes me all the happier that I am well beyond that stage.

My daughter phoned me tonight: the ski trip is going well. The two older granddaughters took ski lessons the first two days of the long weekend of skiing. But today the family skied together as a family -- the nine-year-old was able to keep up with the 12-year-old and both kept up with their parents. Apparently the 12-year-old got "trapped" at the top of the mountain -- whatever that meant. It sounded like she did not want to discuss it further so we switched topics, thanking each other for Christmas gifts.

Our daughter and her family are skiing in the Rockies, staying in Avon.

The phone call brought back some bittersweet memories. Thirty years ago we were doing the same thing, but in our case, we were skiing the German / Swiss Alps. We also got trapped in a ferocious storm at the top of the mountain one year. I stuck it out drinking gluhwein in a mountaintop chalet. Our 12-year-old daughter (now the mom who is skiing with her family in Colorado) was trapped on an open chairlift for about two hours -- of course, we did not know that at the time. (My wife was not out there that day.)

The storm did knock a gondola off its track, resulting in several deaths. The mountain was shut down; clean up and rescue efforts were begun. I found our 12-year-old daughter, and asked if she was okay. I was going to stay up on the mountain to help find injured skiers. There were only a limited number of tracked vehicles to take folks off the mountain. I asked the 12-year-old if she could get to the bottom of the mountain on her own. It would be about a 30-minute run down the mountain -- and she would have to take multiple runs to get to the bottom. She said she could.

And she did. Several hours later, I was back at the parking lot and somehow the two of us caught up with each other.

And the Vikings are now ahead 49- 17 with still too much time to play. I think it's going to be an exciting play-off season. Tom Brady, Cam Newton, the Cardinals, the Vikings, the Jets.

After the family (see story above) got back from skiing, they picked up the youngest member of the family, 17-month-old Sophia. I've talked about her before.

She finally did it. She ordered room service. 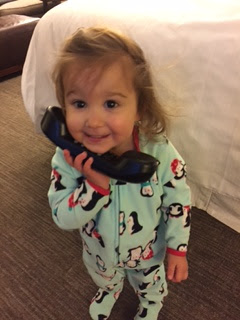 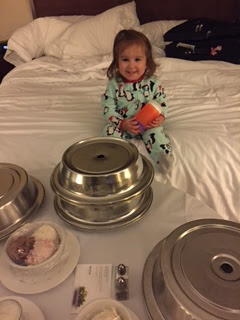 
Original Post
A new link has been added to my "Data Links" page: US crude oil exports.

I can't imagine a more eclectic set of songs that takes you from deep sadness to outright laughter; what a roller coaster of emotions in the video below. And there's only one song that's a bit too syrupy for me. But nine out of ten ain't bad.

This is really quite a remarkable song set, or as they say now, "playlist." The best single year for music was 1969; the best decade, the 60's. I completely missed (that is, was absent during) the 70's and from what I can tell, it's been all downhill from there, with some exceptions (Lana Del Rey). Perhaps the best thing about this list: the wide range of soloists/groups and a most interesting selection from their immense discography.﻿

One group is missing from the video below, but perhaps that's best.


Greatest Music Hits From The 1970s
Posted by Bruce Oksol at 3:11 PM No comments:

Not Ready For Prime Time -- My Thoughts On Repealing The Ban On US Crude Oil Imports -- December 27, 2015

December 28, 2015: in the original post I mentioned Harold Hamm. I see that he has commented on US crude oil, prices, and exports.


Original Post
I thought I had posted my thoughts on what the repeal of the crude oil export ban means for the US. I had sent e-mail comments to a reader with intentions to post those comments, but then I forgot. What little I have posted suggests I have been "confused" on the subject. It's a fluid situation (no pun intended), and it's likely my thoughts will change again. Whatever.

This is what I wrote to the reader in an e-mail (with some editing). It is probably not ready for prime time, but at least provides a more definitive look at what my thoughts are at the moment.


A couple weeks ago I wrote that the repeal on the ban to export US crude oil was not that big a deal because there was no market for WTI as long as Brent was less expensive.

Analysts at Raymond James said the same thing; that's where I first saw it.

But I've changed my position on that. The repeal of the ban is a huge deal, mostly because the concern about adequate storage is no longer an issue. It gets back to margins.

Without the ability to export crude oil, Harold Hamm was forced into leaving oil in the ground (DUCs) or paying Cushing's fees to store it. Now, however, if Harold Hamm can actually sell a bbl of oil to Vitol for more than it costs to store it or leave it in the ground -- then Hamm comes out ahead. In other words, Harold Hamm now has has a global market, not simply Cushing and the East Coast refineries, to consider.

More importantly, for the US economy, there will be a mini-boom, or maybe a big boom, as big construction companies start getting contracts for new storage areas along the Gulf Coast, new terminals in anticipation of increased exports, etc.

Again, this is not ready for prime time, but I at least wanted to get something down "on paper."

Bottom line for me: the lifting of the ban on US crude oil imports is a big, big deal. Too many analysts are focusing on one data point: the price of WTI. That focus is way too narrow. Most of us can't remember what the global oil market was like 45 years ago when there was no ban on US crude oil exports, so we don't have any perspective.

"It's acted as a kind of subsidy for oil refineries of U.S. light-type of oil," said Arthur Herman, a senior fellow at the Hudson Institute, a conservative think tank in Washington.

What's more, he noted, the export ban already has an exemption for Canada, where the U.S. is shipping more than half a million barrels of crude a day. And this summer the U.S. agreed to allow some light oil exports to Mexico.

A couple of days ago I posted a poll asking whether "Bakken DUCs are a big deal?"

I had planned to write about DUCs awhile ago but have decided to put that discussion off. I feel I need at least one more month of data -- which we won't get until mid-January, 2016, when the next Director's Cut comes out, with the November, 2015. Production data should be available prior to the publication of the Director's Cut.

At that post I linked a New York Times article on DUCs.

Today, I'm just going to post some observations, keeping comments to a minimum:

Worksheet (explanation below the worksheet):

This table includes only Bakken wells in North Dakota as defined by the NDIC
The change in the number of producing wells is a combination of new wells coming on line (including previous wells taken off-line for some reason) and older wells being taken off-line.

Note: in column 4, the averages are for the calendar year. For 2013, there are two averages provided. For the first 11 months, the average change in the number of wells month-over-month was 158 (December, with only 50 new wells was an anomaly, so I wanted to see the average without December's data; the average for the year -- all 12 months, including December -- was 149 more wells on average month-over-month).

When looking at the monthly production/well, remember this incredibly important point: in 2013, they were drilling across the entire Bakken. In 2015, drilling had shifted to the best spots in the Bakken. Average production has decreased about 500 bbls/month/well in 2015 compared to 2013.

So, maybe one can add this information to the question whether DUCs are a big deal.

By the way, here's another look at DUCs. Take a look at Robinson oil field, a fairly active field over the past few years. The data goes back to 2010, and the list is up-to-date (although total production for all wells has not been updated).

One can quickly scroll down the list. IPs in bold blue are wells that are currently DUCs or were DUCs at one time, and have since been completed. Some DUCs will have been missed. When next month's data comes out, some (many? most?) of the wells currently on conf status will go to DUC status.

You might note the Sinclair well back in 2013 that is a DUC. What gives? 2013 was well before the November, 2014, date when an extension for well completion was approved. That Sinclair well was permitted in 2013, but was not spud until February 2, 2015; it reached total depth February 27, 2015, but it is now a DUC (has not been fracked). This will be a good well to follow. Although it is on DUC status, it will be interesting to see if the well is completed within a year of spud (February, 2016); if not, how soon after.

Another active field one can look at is MRO's Bailey field to get a feel of the prevalence of DUCs.
Posted by Bruce Oksol at 11:26 AM No comments: