Just to name a few:
Some others:

This is an interesting observation. Some years D-Day anniversaries and Pearl Harbor anniversaries are completely ignored by the mainstream media.Tomorrow is the 74th anniversary of "Pearl Harbor." The 74th is not the 75th or the 50th or the 100th, and yet there is all kind of coverage for the 74th. One has to ask why.

I am convinced that the White House works hand-in-glove with mainstream media to set the agenda for what will be presented to the American public. At a time when President Obama's foreign policy is going sideways, what better way to get Americans' attention elsewhere than to commemorate the US servicemen and servicewomen. My hunch is that the White House -- earlier this year -- let the mainstream media know that the Pearl Harbor anniversary this year would be important to cover.

If one wants bigger, better marijuana plants, one wants higher atmospheric CO2. See photograph on  page 677 of the study at this link to see the difference in plant growth based on CO2 concentrations.
Posted by Bruce Oksol at 6:57 PM No comments:

A reader sent me this story, an incredibly good story about the B-52 in The New York Times. I had one flight in the B-52, out of Grand Forks AFB, back in 1984, or thereabouts, maybe 1985. It was an 8-hour, "low-level" flight through the Rocky Mountains, at midnight. We stepped out to the bomber about 4:00 p.m., departed about 10:00 p.m. and returned about 6:00 a.m. the next morning. I was not recording a daily journal at that time so I don't know the specifics and the hours are not exact. It might have been a six-hour flight and it might have taken off a bit earlier and landed a bit earlier but that's what I remember. [December 7, 2015: I found my official flight records -- the flight was April 12, 1983; the sortie last 6.5 hours.]

Air Force commanders are now urging the Pentagon to deploy B-52s in Syria.
“We’re ready, we’re hungry, we’re eager to be in the fight,” said Col. Kristin Goodwin, who commands the Second Bomb Wing at Barksdale Air Force Base in Louisiana, where about half of the bombers are based.

Now in its 60th year of active service, the bomber is slow, primitive and weighed down by an infamy lingering from the carpet bombing of Vietnam in the 1960s. But 76 B-52s still make up the bulk of the United States’ long-range bomber fleet, and they are not retiring anytime soon. The next potential replacement — the Long Range Strike Bomber, which has yet to be designed — is decades away, so the B-52 is expected to keep flying until at least 2040. By then, taking one into combat will be the equivalent of flying a World War I biplane during the invasion of Iraq in 2003.

The unexpectedly long career is due in part to a rugged design that has allowed the B-52 to go nearly anywhere and drop nearly anything the Pentagon desires, including both atomic bombs and leaflets. But it is also due to the decidedly underwhelming jets put forth to take its place. The $283 million B-1B Lancer first rolled off the assembly line in 1988 with a state-of-the-art radar-jamming system that jammed its own radar. The $2 billion B-2 Spirit, introduced a decade later, had stealth technology so delicate that it could not go into the rain.

I don't know if there has been an all-female B-52 flight crew flying combat but back in 2005, this all-female flight crew flew something that gets up even more close and personal in the USAF when in combat, the C-130. In this case, the plane was transporting 151 US Marines.

More remarkable than the fact that these were all women, is the age and ranks of these women. This is how I remember the US Air Force: very young people, in their mid-20's and younger, flying multi-million aircraft for the best air force in the world. I remember flying a medevac C-5 or C-141 from Ramstein to Washington, DC, the oldest crew member on the flight, when I was about 35 years old, and about ten years older than the next oldest active duty member on that aircraft.

For more on women flying in combat, see this link.

This is not news. There is nothing new here. It's just a reminder. Some folks get to my site by googling and end up on old posts, and then find internal links that are broken. This is simply a reminder that the posts are still there; the URL was changed sometime ago, and some internal links have not been updated.

This blog goes back to about 2009, I believe. Sometime in 2011 or later (I forget), my site was hacked and the URL "stolen." If you click on a link and get a message that the page does not exist, do not despair. If it's a link to one of my posts, the post is still there. Simply insert "the" in front of the URL. I changed the URL "milliondollarway....." to "themilliondollarway.blogspot.com" and have had no further problems. I'm correcting the links as fast as I can. Some URLs are even different from that, but the correct URL is: "themilliondollarway.blogspot.com". No posts have been lost; the URL just needs to be corrected.

See graphic below where to insert "the." 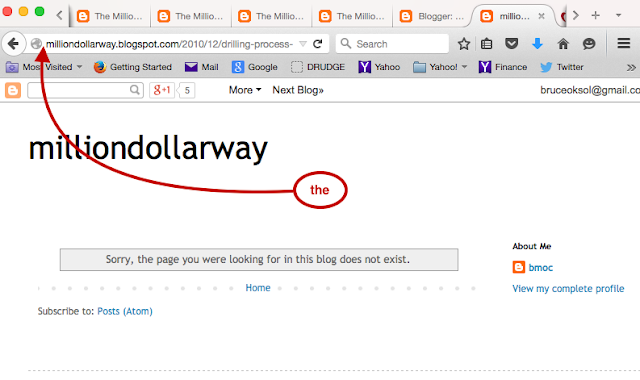 It took a little time to train Sophia, age 17 months, and it took a little while for her to complete the task, but it was time well spent. I got a lot of blogging done, and she had a lot of personal time with Mother Nature. I paid her fifty cents/bag, deducted 10 cents/bag (hefty discount rate on cost of the bags); withheld thirty cents for income tax purposes, and FICA; she netted about 10 cents/bag. 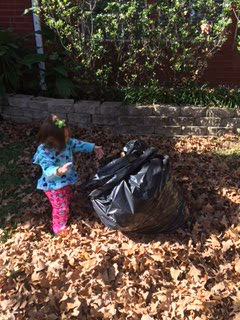 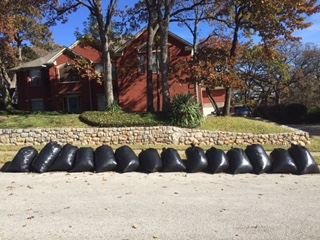 Fourteen bags are in this picture. At the moment, there are now nineteen bags along the curb. It was well after dark when she completed the 19th bag, so I didn't get that photo.
Posted by Bruce Oksol at 11:56 AM No comments:

Disclaimer: in a long note like this there will be typographical and factual errors. In addition, because I have no formal training or background in the oil and gas industry, there are things I post but do not understand. I may be missing things and may be misinterpreting things. I may be seeing more than there actually is. Do not quote me on any of this. If this stuff is important to you, go to the source.

I posted this yesterday but did not get a chance to look at it more closely; it was late, I was tired.

But this well has an incredible story -- at least the very little we know about it.

There are five wells on this pad. This one runs right down the center and was drilled/completed some time ago. Later, four more wells were drilled/completed, with two wells one each side of the well in question.

Here is the graphic of the 5-well pad: 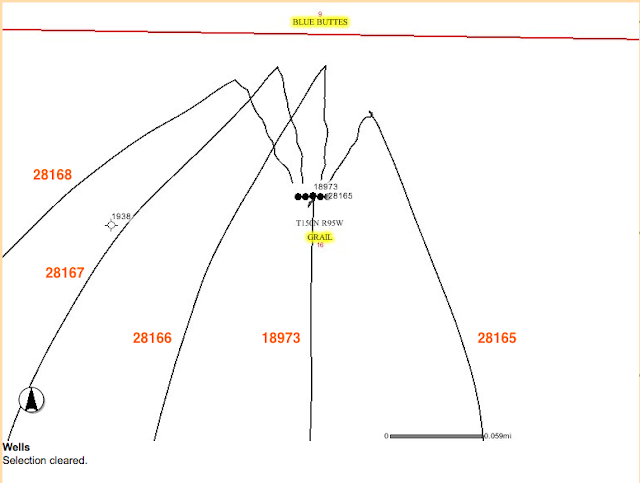 Abbreviated synopsis of the five wells, when they were tested, which usually occurs soon after they are fracked/completed:
Note the jump in production for this well; sundry forms do not shed any light on reason for jump in production; we saw something similar about a year ago:


18973, 2,579, QEP/Helis, State 1-16/21H, Blue Buttes, a Three Forks well, t10/25/2010; cum 567K 10/15; inactive 4/14; looks like it might be back on line as of 10/14; yes, now shown to be active, 12/14; huge jump in production in 12/14; coming back on line after permission to commingle production from multiple wells; large production number could be due to 'mis-allocation' during early commingling; random update, March 20, 2015; random update, May 7, 2015; [note: the scout ticket shows this well in the Blue Buttes oil field, but it is clearly in the Grail oil field, and the scout tickets of its sister wells all show the Grail oil field. A file report has "Grail" typed in and then crossed out in ink and handwritten "Blue Buttes." The geologist's narrative also calls it a "Blue Buttes" well. The very earliest maps show the well clearly in the Grail oil field.

And, finally the scout ticket for the last well, #28168, the farthest well to the west:

This is the scout ticket and full production record for the index well: