April 17, 2019: just like clockwork. Yesterday, Yuma became the second city to cry "Uncle." Today, this headline: group of 170 migrants surrender at Texas border. From McAllen, TX, the main route for drug smuggling and human trafficking, a group of 170 migrants from Central American surrended to US authorities shortly after crossing the Rio Grande. The migrants claimed to be from Honduras, Guatemala, El Salvador, and Nicaragua.

We now have the second city crying "Uncle!" First, it was Las Cruces, now it's Yuma, Arizona.

Less than an additional 200 migrants overwhelmed Las Cruces, NM. Now, Yuma says it's reached its breaking point. The number of immigrants coming in was not noted, but my hunch it's far less than 100,000.

The federal government says it rounded up 103,000 illegal immigrants along the southern border in March, 2019.

If the trend continues, it's hard for me to believe that Arizona, New Mexico, or Texas will vote against Trump in 2020.
Posted by Bruce Oksol at 9:38 PM No comments:

Huge Win For Both, But Investors Clearly Think Qualcomm Was The Big Winner -- Waiting For Trump To Weigh In With His Two Cents Worth -- April 16, 2019, T+4, Part 2

April 18, 2019: see original note. Apparently there is at least one other lawsuit/issue. It turns out Apple and Qualcomm are still going to court to settle the patent issue. I'm not sure I understand all this.

Having said, regarding the case that was settled out of court this week, Macrumors has more on this issue. Not publicly disclosed but UBS analyst suggests:

Qualcomm stock surges, but it was also a huge win for AAPL investors also.

The trial was set to begin this month.

Disclaimer: this is not an investment site. Do not make any investment, financial, job, travel, or relationship decisions based on what you read here or what you think you may have read her.

Netflix: later. If I remember.

The "fix" is in: FAA finds Boeing "fix" "suitable." Has anyone seen the ATT commercials, "just good enough" is not good enough? Or something to that effect. "Hello, this is your captain speaking. In a few minutes we will be taking off. Thank you for choosing to fly our Boeing 737 Max 8. The FAA has found 'our fix' to crashing jets to be 'suitable.' Have a good flight."

I can give you sixteen reasons, but eight is a good start: "8 reasons why gas prices are going up." Link here, at MoneyWise. The number one reason, the elephant in the room: President Obama killed the Keystone XL. Six of the eight reasons given at the link are crap but they "cover" Obama's ass.

China: looking to buy more US pork, poultry to reach trade deal. 10-1 odds Trump will be given no credit by the mainstream media if this happens. China was hoping to wait Trump out but Goldman Sachs now predicts Trump will win a second term. Trump's popularity at this point is higher than Obama's -- 53%.

Wells Fargo: could be the GE of the banking sector, InvestorPlace. Warren Buffett has held on to Wells Fargo through thick and thin.

Beto; not charitable. Released tax returns: never gave more than 0.5% of $350,000 annual income. What was that about tithing? From a reader, if 10% was good enough for Jesus, 10% ought to be good enough for Uncle Sam:

Boeing: government bailout just in time. Secures $14 billion deal for modernizing B-1 and B-52 bombers. Zacks. Zacks with a "k." Goldman Sachs with an "h."

It appears we are all doomed. 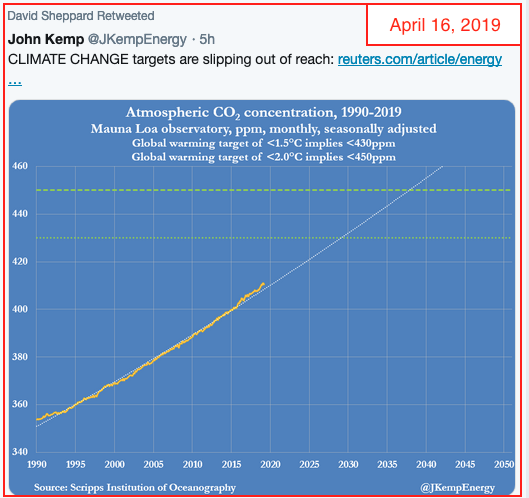 I'm going to enjoy what little time I have left. I'm heading over to Copeland's: Famous New Orleans Restaurant for coffee and cheesecake later this afternoon. Or maybe an eclair at Starbucks.

Chicago: snowfall -- biggest snowstorm this late in the season in 50 years. Link here. And it wasn't just a slight dusting:


Chicago's O'Hare Airport was whitened by 5.3 inches of snow on Sunday.

That made April 14 one of the top-two snowiest days this late in the season. The snowiest day in the city's history from April 14 to early May is 5.4 inches of snow on April 16, 1961.

It was enough to bring Chicago O'Hare and Chicago Midway airports to a ground stop for arriving flights, according to the Federal Aviation Administration.

O'Hare canceled 436 flights on Sunday amid snow and ice, according to Flight Aware. 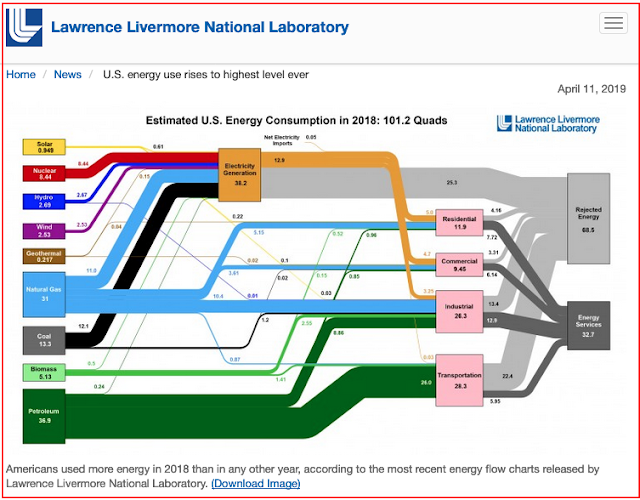 
Cameron LNG has begun pipeline feed gas flow to the first liquefaction train of the liquefaction-export project as it prepares to begin production of liquefied natural gas (LNG) at the facility in Hackberry, La. This is the final commissioning step for Train 1 of Cameron LNG Phase 1.

US LNG export facilities are tracked here.
Posted by Bruce Oksol at 8:09 AM No comments:

Driving season yet to begin: 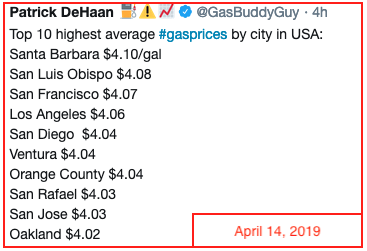 New all-time record: 100 quadrillion BTUs. The actual number is 101.2 quadrillion BTUs, as "measured" by Lawrence Livermore National Laboratory. It's amazing to see how much this country no longer "trusts" nuclear energy. Solar energy accounted for 0.949 quads (not even a single quad) whereas nuclear energy was even less, at 0.44 quads. 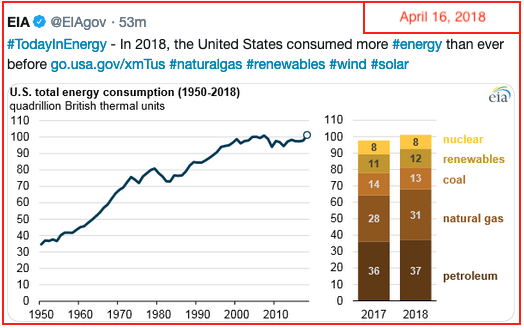 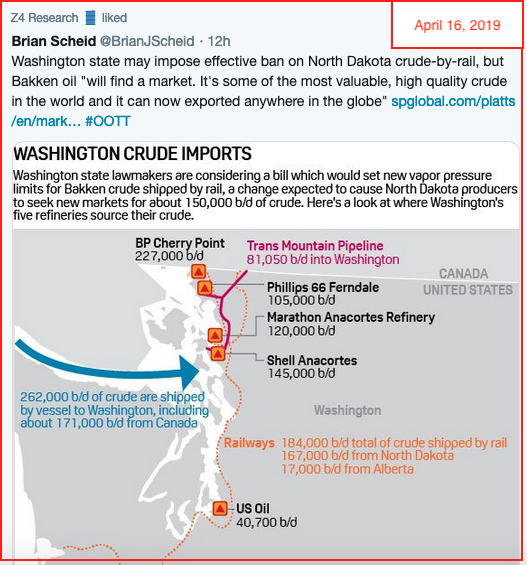 
The rapid development of the Permian’s vast hydrocarbon resources that we expect will continue through the 2020s and beyond can’t happen if there’s insufficient gathering-pipeline infrastructure in place to transport crude from well sites to takeaway pipelines. Similarly, the favorable pricing that Permian producers hope to receive for their crude oil is possible only if their gathering systems are interconnected to two or more long-haul, big-bore pipelines that offer them some serious destination optionality.

The need for new gathering pipes with multiple links to Gulf Coast- and Cushing-bound takeaway pipes is the driving force behind the Beta Crude Connector, a planned 100-mile-plus pipeline network in the heart of the Permian’s Midland Basin that was unveiled on Monday (April 15) by a joint venture of Concho Resources and gathering specialist Frontier Energy Services. Today, we kick off a new blog series on crude-gathering projects in the Permian with a look at the Concho/Frontier plan. 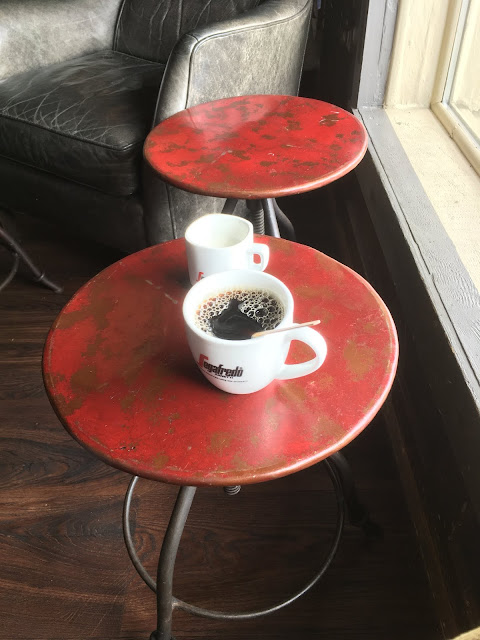