It's been a week of meager daily activity reports coming out of the Bakken: very few new permits; almost no reports of any DUCs being completed; most new wells going to DUC status. Meanwhile, WTI reversed direction, began trending down, and came close to trading under $48, finally settling at just over $49 for the week. Saudi Arabia is "talking their book" in preparation for its IPO arguing that the demand for oil will grow for decades. Whatever.

Top story of the month?
First shipment of Bakken oil heads for Asia

Posted by Bruce Oksol at 8:07 PM No comments: 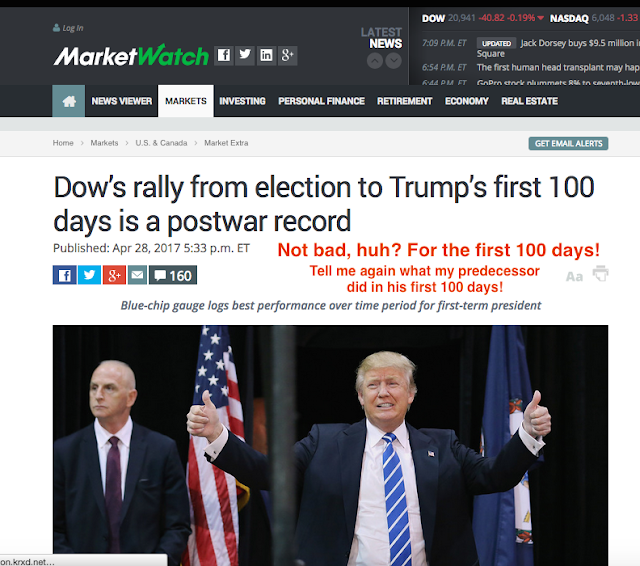 Posted by Bruce Oksol at 7:57 PM No comments:

The most recent numbers have just been posted for Saudi Arabia US crude oil imports: 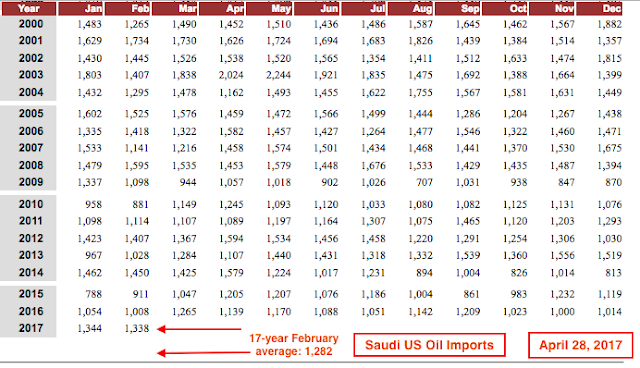 Most recent February: imports exceeded the average for February for the past 17 years: 1.282 million bbls.

If you look across the chart in general, the amount imported in February, 2017, was at the high end of all the monthly import data .

And then folks wonder why WTI is trending below $50.
Posted by Bruce Oksol at 3:58 PM No comments:

City commissioners unanimously approved a recommendation by City Administrator David Tuan to work with Fargo-based Ulteig and AE2S, which is headquartered in Grand Forks, during the board’s regular meeting this week.

The two companies, both of which have offices in Williston, submitted a joint proposal outlining a plan to take on the role of project manager, which will include oversight and cooperation with engineers, tribal representatives, contractors and utility companies, among others, Tuan said.

A committee that included Tuan, newly-appointed airport director Anthony Dudas and other city officials received four proposals from companies around the country, including one from KLJ Engineering, which had previously been serving as project manager.

Apple component manufacturer Foxconn and Apple say the manufacturer will be making a multibillion dollar investment in the US, as much as $7 billion. Great PR move. The manufacturer must like the lifestyle and cheap, dependable electricity. Tim Cook must have gotten tired of all that trans-Pacific flying.
Posted by Bruce Oksol at 2:27 PM No comments:

With all this focus on his first 100 days, one needs to compare:
With a stretch, one can think of a number of things President Obama accomplished in his eight years but most of those "things" have been undone in the first 100 days of the new administration, to wit President Trump's newest executive order "opening up the Arctic and offshore oceans" to scientific study and exploration.

The real questions today:
Those are rhetorical questions; please don't respond. We all have our political differences.

Tillerson says he will cut the State Department by 9%. I haven't read the stories. I assume it will mostly be by attrition through retirement which seems a lot more humane than the Hillary method: attrition through the Benghazi method.
Posted by Bruce Oksol at 12:44 PM No comments:

By the way, I see that Time, Inc, shares this morning are down almost 20%. Wow.

But back to the graphic featuring Tioga and Prairie Rose, North Dakota: 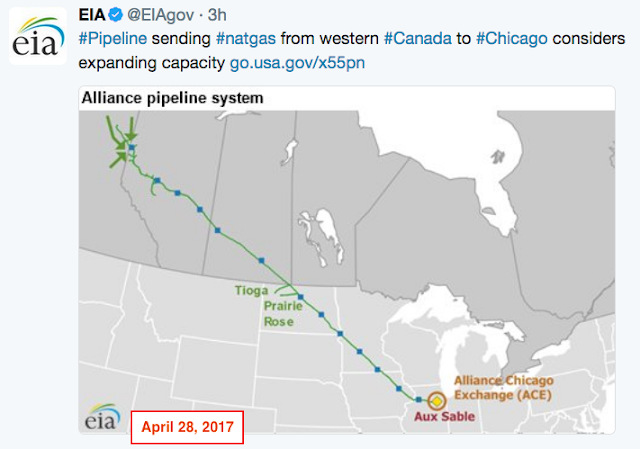 The Prairie Rose Pipeline, owned by Aux Sable, Calgary, with origins in Burke and Mountrail County, will feed natural gas from these two counties into the Alliance Pipeline, owned by Summit Midstream Partners; this pipeline is 2,300 miles long and runs from western Canada to the Chicago hub.

Capacity:
That's almost a 50% increase in one pipeline system.

A pdf will download: http://www.morningstarcommodity.com/Research/corpus-christi-new-permian-window-on-the-world-FINAL.pdf
Posted by Bruce Oksol at 8:38 AM No comments:

Two More US-LNG-Export Stories -- April 28, 2017; Look At the Number Of Jobs One LNG Export Facility Will Generate -- President Obama, What Were You Thinking?

This past week has been an incredible week for LNG and the US and exports. Here are two more stories sent to me by a reader: 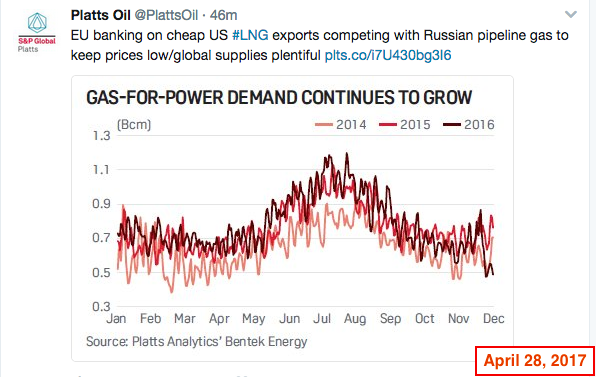 For those with a long memory, Poland put too many obstacles in the way for E&P operators to explore for shale gas in their own country (I believe it was ExxonMobil that inally gave up trying; this was not that many years ago; within the lifetime of the blog).

By the way, where is Sabine Pass shipping US LNG? Glad you asked. From that link from Bloomberg: 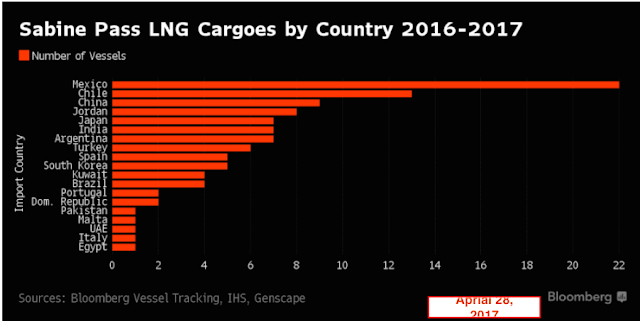 Second story: Golden Pass LNG cleared to export, also at FuelFix. Data points:
Meanwhile, no new jobs under President Obama, but now he's giving speeches that fetch him $400,000. To date: one. Another one scheduled. Even Pocahontas expressed concern.

Posted by Bruce Oksol at 8:34 AM No comments:

This is not rocket science.

Think about it. The Saudi Aramco CEO is getting ready to go public with his company. Would he launch his IPO telling potential investors that the company will stop growing by 2030 according to IEA as demand for our product goes away? LOL. He is simply "talking his book" when he tells us that demand for his product will continue to grow through 2050.

In hindsight, it's amazing Bloomberg posted such a long article on such a simple story. No one knows how long the demand for crude oil will last, but should it be surprising that Saudi Arabia says demand will continue to grow for decades?

By the way, I think Saudi Arabia is a voice in the wilderness, suggesting that oil demand will continue to grow for decades.

This past week has been incredible: all the stories coming out about US exports of LNG and crude oil. If I get a chance, I will bring these posts together in one spot.

There are two huge stories that will be interesting to watch:
one, Asia, it appears, seems to prefer light oil; US still prefers heavy oil
second, US LNG exports to Europe has to be scaring Russia
This all takes me back to "The Big Story" -- linked at the sidebar at the right -- a post that was first posted about the time the Bakken boom began. At that link, several big stories:


The difference this year is this:  while the regional balance is more bearish than last year, there also is more pipeline capacity available—such as REX’s incremental 0.8 Bcf/d added in December 2016—to send gas away, which has helped relieve constraint-driven pricing at some hubs.

Additionally, when REX’s 0.8 Bcf/d began service, it didn’t have the effect on production that previous expansions had. Instead of garnering new production, flow data indicated that it primarily “stole” existing production from other pipes, presumably leaving capacity open elsewhere.

This may signal the beginning of the next phase of the Northeast’s transformation into a U.S. supplier of gas—the unconstrained phase. There is more takeaway capacity due later this year and more capacity to serve regional demand as well, with Williams’s Dalton Expansion online and the Cove Point LNG export facility due to begin operations later this year. That said, rig counts are on the rise again as well after bottoming out last fall. Baker Hughes rig count data show the rig count in the Marcellus is 45 rigs, up from a low of 21 in mid-August 2016, while rigs in the Utica have more than doubled from 10 a year ago to 23 now.

While we have yet to see an uptick in Northeast production this year, it seems only a matter of time before production follows.

Scott Adams: how to know whether you are a real person or a simulation.
Posted by Bruce Oksol at 7:06 AM No comments:

Disclaimer: this is not an investment site. This helps me put the Bakken into perspective.

Wow, wow, wow: GDP at 0.7%. Expectations as low as 0.5% so this is not as bad as it could have been. We're okay. Market with no reaction. Dow 30 futures suggest an opening of up about 15 points. Folks are already looking at 3% GDP for the second quarter. The "Street" doesn't care about the 1Q GDP -- it's always low.

OMG: Atheanhealth is down almost 20% in pre-market trading.

Boom. From FuelFix, shale investments in the US have surged $100 billion. No signs that things will slow down. Three plays in the US are getting the bulk of this $100 billion: the Permian; the Bakken (four counties in North Dakota); and, the Eagle Ford.

Boom. GM knocks it out of the park. Easily beats estimates. Shares up 1.5% in pre-market trading. EPS $1.70 vs $1.48 forecast. Also beat on revenues. Tops estimates for 8th straight quarter.

Surprise: ExxonMobil EPS 95 cents vs 86 cents forecast; missed on revenues and took loss on upstream. But the bean counters managed to surprise analysts at the end of the day: earnings per share. The guys working in the back room deserve a huge raise in pay. Good for them.

No repeat of the DAPL (link at FuelFix): Trans-Pecos Pipeline ready; protest camp to close. See more of this story at this post.

Apple wins: Qualcomm says it will no longer get any royalty payments from Apple for iPhone technology. Complicated story. But Qualcomm's announcement seems pretty straightforward.

Link here at Bloomberg: story developing. We will know more next month after PJM's capacity auction.

When the story comes out next week, the story will be 23 paragraphs long with a huge headline that "wind wins again."

One will have to get to the 21st paragraph to read the following:


Payments from capacity auctions are sought after by owners of nuclear and natural-gas fired plants and other resources in an era of lower power prices. Bidders have to ensure they can supply energy at any time of the year or risk paying hefty penalties under a rule designed to head off a repeat of the 2014 polar vortex, when a cold snap led to fuel shortages, forcing some plants to shut.

While its role in the capacity market has been limited, wind has been playing a bigger one in the spot market. Its capacity on the grid jumped to 7,655 megawatts last year and has more than doubled in the past seven years, data from the Valley Forge, Pennsylvania-based grid operator show.

0.6 percent the total energy purchased at the auction. Wow.

And the writer fails to say how much that trivial amount is costing its customers.

Let's see if Bloomberg provides the percent that wind energy adds to overall energy purchased at next month's auction. My hunch: we won't see it.
Posted by Bruce Oksol at 6:59 AM No comments:

What goes around, comes around: Bernie Sanders in cross hairs of FBI. Reason? Failed college. Sounds like the Trump story.


Gutierrez, 56, has a long criminal history, according to the California Department of Corrections. In 1984, he was sentenced to nine years for forcible rape, seven years for forcible oral sex and three years for possession of a controlled substance with an intent to sell, the California Department of Corrections said. He served the sentences concurrently and got out of prison about six years later, released on parole.

Between 1990 and 1997, he was reimprisoned at least five times for parole violations, according to corrections records, and in 1998, was convicted of having sex with a minor under 18. He went back to jail, but gained parole again in April of 2002. The California Department of Corrections never heard from him again.

The Texas Rangers got him:


The Kennedy Klan is probably on its way out to Gillette, WY: 9 inches of snow over night.
Posted by Bruce Oksol at 6:58 AM No comments: