Original Post
I may have to start a new blog dedicated to the "Victory Lap" speech, East Room of the White House, noon, February 6, 2020.

Best recent example of self-immolation -- the act of killing oneself for political or religious reasons, particularly by burning. Ouch. 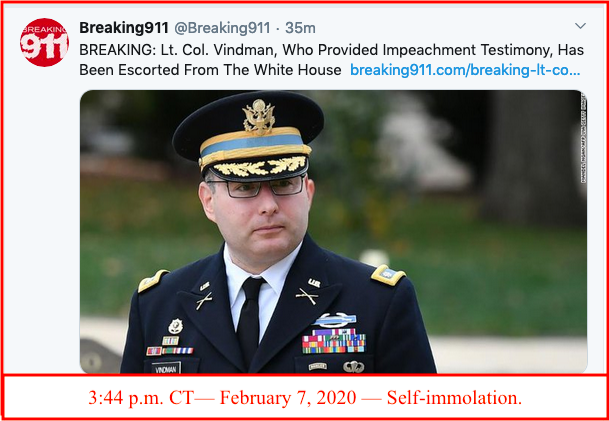 ...and if he divulged any confidential - secret - top secret - compartmentalized information without authority his leaving the White House may be the least "bad thing" that happens to this officer.

I'm sure the way this works, is that he will be interviewed by a superior officer and that testimony will be compared with what he provided at the impeachment hearings.

And, oh, by the way, my hunch is that the president didn't have to say a thing. Except what he said in his speech yesterday.

Item: a "talking head" -- it might have been Andrea Mitchell or someone else at MSNBC -- laughed at the "Victory Speech," suggesting that it appeared to be nothing more than an alphabetical list of names that was the basis for President Trump's stream of consciousness. I would suggest that who(m)ever made that comment -- and others who think the same thing -- may want to go back through that speech, line by line.

CNN is reporting that Vindman's brother -- also at the White House -- was also fired.

Later: the video soundbite suggests that President Trump did not make the decision to fire him. He implied that decision would be left to others. LOL. Brilliant.
Posted by Bruce Oksol at 3:50 PM No comments:

This pad is tracked here.

Amphibolite will be on/near the Enerplus pad with these wells:
The well holding this lease by production:
Production steady but non-descript from July, 2010, to December, 2019.

For a mineral owner, what does a 500K well mean? 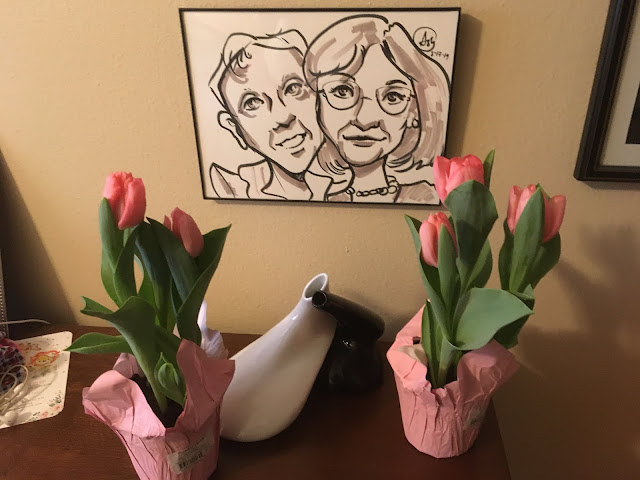 Posted by Bruce Oksol at 3:39 PM No comments:

Supermoon: I'm getting mixed signals on this one. Talk radio said we would see it tonight. The internets say it will be February 9th. This site doesn't even mention a "February supermoon." This site says it will be at dusk, Saturday, February 8th.

The blog: talk about coincidence, serendipity. Yesterday I wrote, and posted:


If there had been no Ukrainian phone call at all, there would have been something else. Assassinating a legitimate general Army office might be impeachable; it puts every one of our own general officers at increased risk. The emoluments issue is still out there. The "obstruction" on tax returns is still out there. Unilaterally withdrawing from the climate "deal" is still out there. There are/and were a million reasons that Nadler/Schiff could have come up with to impeach Trump. [The interesting thing is that they were unable to come up with anything substantial -- reminding us how weak their case really was. I'll get back to this later.]

This, in some ways, may be a bigger story than the impeachment hoax. The "emoluments" case might have had some substance; I don't know. But clearly the articles of impeachment had no substance. I have not seen the report, but apparently -- according to President Trump -- who occasionally is known for a bit of hyperbole -- and who may not have yet the report when he stated the case was unanimous, 3 - 0, in his favor.

Link here, and yes, it was unanimous ... but that detail was buried in the stories, if reported at all.

By the way, this is pretty "funny." The president is "scooping" his own news. The press was completely unaware of this breaking story -- or had not yet had time to report it -- or maybe they had no plans to report it -- until President Trump mentioned it (in passing?) while walking out to his helicopter on his way to a North Carolina rally. 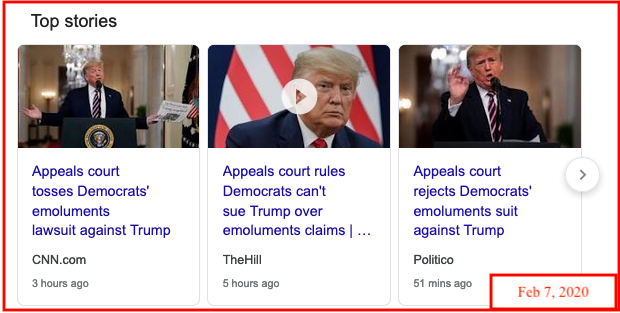 At the NDIC "well search" site: Eagle Mountain not listed.

Bakken operators are tracked here. Whether or not Eagle Mountain Energy Partners is an operator or a non-operator like NOG is yet to be determined.
Posted by Bruce Oksol at 2:42 PM No comments:

Later today this well should be reported:
Full production profile:

The file report for this well does not yet include the geologist's narrative.

By the way, a middle Bakken well on that pad has already produced more than 125K bbls of crude oil in less than four months:

January jobs: US adds a much strong than expected 225,000 jobs. Reason: global warming.
Market:
Utilities ... for those moving .... I was asked very nicely if I might link this site. I don't have any relationship with the individual who made the request or the site itself. But it seemed like a genuine request, so here it is.

Peak oil? What peak oil? Global oil, gas discoveries hit four-year high in 2019. From Rigzone.  Data points:
Graphic from Rystad Energy: I wonder if the big natural gas spike in 2017 was related to Guyana? I don't know. I'm sure a reader knows. 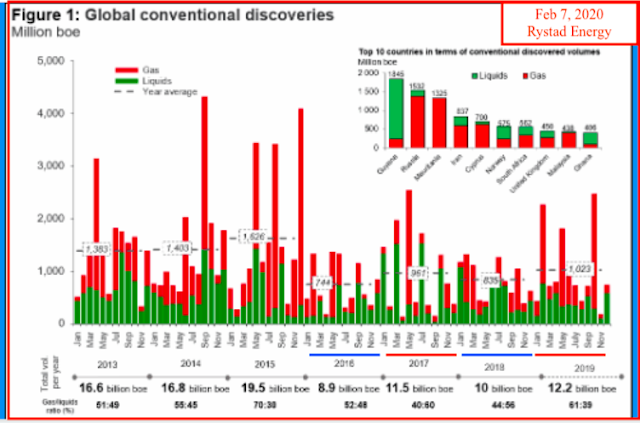 
U.S. shale oil production and exports have contributed to global oversupply in recent years, which, in turn, has amplified pressure on OPEC to implement production cuts to keep crude oil prices from collapsing to untenable levels. That’s led to an agreement among most OPEC countries and nearly a dozen other non-member producing countries — together known as OPEC-Plus — to limit production, an accord that’s remained in place since January 2017.

However, oversupply conditions now are also prompting U.S. oil and gas producers to pull back on their planned capital expenditures for 2020, suggesting a slowdown in U.S. production growth later this year and into 2021. Recent global oil supply and demand forecasts by the International Energy Agency (IEA), the U.S. Energy Information Administration (EIA) and OPEC itself suggest that such a slowdown, if it materializes, could present a window of opportunity for OPEC-Plus to relax its quotas and potentially reclaim some of its lost oil market share, at least for a time. Today, we examine what the recent changes in monthly data from IEA, EIA and OPEC indicate about potential shifts in the OPEC versus non-OPEC oil supply and demand balance and what that could mean for OPEC’s role in meeting global demand.

Earlier, we described how OPEC-Plus, including 10 non-member oil-producing countries, have managed oil supply since January 2017 under an agreement aimed at preventing a repeat of the oil-market collapse of 2014-16. Reducing supply from the 22 OPEC-Plus countries had the intended effect of supporting global oil prices. But, as expected, OPEC members’ market share fell as a result, while the share held by non-OPEC producers has increased. Production gains in the U.S. have been the most dramatic, with crude oil production growing from 8.8 MMb/d in 2014 to 12.2 MMb/d in 2019, and domestic exports of all liquid hydrocarbons have climbed from 5.3 MMb/d to 8.5 MMb/d in the four years since the U.S. lifted its ban on most crude oil exports. However, as we noted in the previous episode, U.S. producers are now signaling a slowdown in their growth.