Random Look At One Of The KOG Cases Coming Up In The December, 2013, NDIC Hearings

[Note: there may be errors; my wi-fi is intermittent; will be corrected later, if necessary.]

A reader asked about the location of the wells that will come up for permits in the December, 2013, NDIC hearing dockets:


Case: 21447: Application of Kodiak Oil & Gas (USA) Inc. for an order amending the applicable orders for the Truax-Bakken Pool to authorize up to sixteen
horizontal wells to be drilled on two 1280-acre spacing units described as
Sections 26 and 35; and Sections 28 and 33, T.154N., R.98W., Williams
County, ND; and for such other relief as may be appropriate. 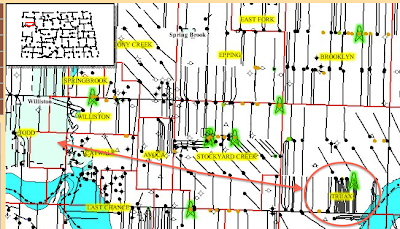 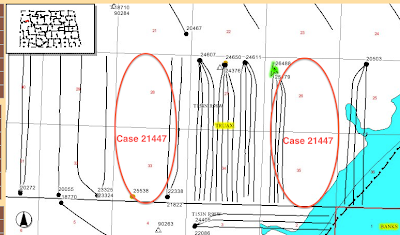 One can click on the graphics, to have them open in a new window, and then enlarge them for better detail.

Again, this was done quickly with problems with wi-fi. There may be errors. I will correct them when I find better wi-fi. That's the Missouri River in the lower right-hand corner.
Posted by Bruce Oksol at 3:29 PM No comments:

In the process of updating the Pyramid wells in northwest Williston, I noted the sudden increase in production in two of the four wells.  One well was off-line for two days (long enough for a pump to be installed?). The other well has not been off-line in the past several months. Note the amount of flaring for both wells. I believe the only natural gas processing plants in the immediate area, north of the river are the Stateline I and II plants west of Williston.

Same with this well. Still no pump according to the NDIC ticket. Note the increase in production in September, 2013, over August, 2013.

Without question, one of the best gift suggestions this holiday season for almost anyone with any interest in aviation, the military, great music, is the Blu-Ray Top Gun with special features.  I bought it at Target, I think for $15.99. (More on pricing of DVDs at Target later, perhaps). But if you are fortunate to live near a Target store, I recommend Target over Amazon. And that doesn't happen often -- a recommendation of brick and mortar over Amazon. Right now, it looks like the Blu-Ray version over at Amazon is priced at $28.46, but there are so many versions, I may have them mixed up. And maybe I didn't pay $16 at Target, but I'm pretty cheap and I doubt I would have paid much more.

It's an incredible DVD. I assume everyone has seen the movie. I bought it for the "Blu-Ray" and the special features.

Some years ago when there was a debate between Blu-Ray and whatever was competing against it, I remember journaling that I knew Blu-Ray was going to win that battle, unlike Sony Betamax which lost a similar battle a decade earlier.

One of the advantages of Blu-Ray is the incredible amount of storage available. And the Top Gun Blu-Ray certainly took advantage of all that storage. I think the 6-part documentary on the making of Top Gun was about two hours long, and all original. That documentary alone was worth the price of the DVD.

And there must be six more hours of more material to go through; I don't know. This is the first time I've seen the Blu-Ray version and I will spend this next week viewing bits and pieces.
Posted by Bruce Oksol at 1:17 PM No comments:

Just three days ago I posted my thoughts on "the next big thing": LMSDD.

Last mile, same day delivery. I used the "last mile" concept used by the telecom/cable television industry. I did not post it but my thoughts were that we would read about LMSDD in the mainstream media sometime in the next six months or so.

Wow, talk about a surprise. In yesterday's New York Times there was an article on the very subject. My wife pointed it out in the Sunday edition of The Dallas Morning News where it had been re-printed. Here is the story at the NYT:


As the holiday shopping season gets underway, same-day delivery has become a new battleground for e-commerce.

For all the sophisticated algorithms and proprietary logistics software involved, many services come down to someone like Fermin Andujar, who finds himself racing to a store, scanning the aisles for the requested items, buying them and rushing them to the customer.

According to eBay’s job description, he is a “valet,” dispatched on Manhattan streets as a personal shopper on a bicycle or in other cities in a car.

The app for eBay Now, the company’s local shopping service, promises that valets will complete a shop-and-drop-off not just in the same day but “in about an hour,” a timetable crucial to the company’s intensifying efforts to one-up Amazon in the delivery game.

It wasn’t so long ago that overnight delivery seemed amazing enough. Then Amazon started building huge warehouses — what it calls “fulfillment centers” — near major cities to be, in a spokeswoman’s words, “as close to customers as possible.” With 40 such centers in the United States encompassing more than 80 million square feet of storage space and employing 20,000 full-time workers, Amazon offers same-day delivery in 11 cities.

EBay, which last month announced plans to expand eBay Now to 25 cities, and other businesses, including Google’s nascent shopping service and start-ups like Deliv, have a different model: Use existing stores or “retail partners” as distribution centers and beat Amazon in the race against the clock.

I think I first blogged, several years ago, about neighborhood Wal-Mart stores becoming re-distribution centers. When pizza is being delivered for a buck or so, someone is going to make a lot of money charging $8 to $10 for same day delivery.

I still like my idea, the old "milk-run circuit."
Posted by Bruce Oksol at 11:16 AM No comments:

Wells Coming Off Confidential List Over The Weekend, Monday

Catwalk Oil Field Updated; "The Selected Letters of Willa Cather" (Yes, This Is A Bakken Story, Sort Of)

The list of fields in the Williston oil basin that I track are listed here.

Catwalk oil field east of Williston was updated this morning; not much new information; not particularly active. It's just a matter of time before this field becomes active again. It will be a big field.

I had never heard of Willa Cather until a couple of years ago. I do not recall how I discovered her. Most likely it was while browsing at Powell's in Portland. I would have picked up a half dozen books to read on my Amtrak trip from Oregon to Williston, the heart of the Bakken. I enjoyed her. I am thrilled to have discovered her, for a number of reasons. And, now, a book of her letters.
Posted by Bruce Oksol at 7:32 AM No comments: