From the AP, so I assume it is not fake news. LOL. Seriously, a huge "thank you" to a reader for sending this:


An appeals court on Saturday refused a request from two American Indian tribes for an "emergency" order that would prevent oil from flowing through Dakota Access pipeline.

The decision by the U.S. Court of Appeals for the District of Columbia Circuit means the $3.8 billion pipeline to move North Dakota oil to a distribution point in Illinois could be operating as early as Monday, even as the tribes' lawsuit challenging the project moves forward.

The Standing Rock and Cheyenne River Sioux tribes have challenged an earlier ruling by U.S. District Judge James Boasberg not to stop final construction of the pipeline, and they wanted the appeals court to halt any oil flow until that's resolved.

The appeals court said the tribes hadn't met "the stringent requirements" for such an order.

Restores at least some of my faith in the US court system. Or maybe I'm just focused on the "Ninth Circuit Court." 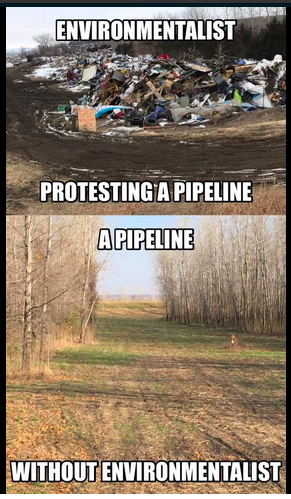 I know nothing about vermouth except what little I picked up when leaning about martinis. A reader happened to mention vermouth in passing and now I'm excited to learn about vermouths. I assume the plural of vermouth is vermouths -- it sounds plausible.


Meanwhile, in Europe, vermouth has taken over as the drink. In Spain, they call it simply, to do vermouth -- by which they mean the ritual of drinking vermouth and enjoying a light snack before dinner and a night out.

From Australia to England, new craft producers are releasing novel and innovative takes on the product across the globe. In America, too, finally, amazingly, we're starting to enjoy vermouth on its own. In New York, where vermouth was actually born in America, Michelin-rated restaurants are serving vermouth straight, even by the bottle on wine lists, and major spirits publications are tripping over themselves to tout vermouth as the trend of the moment. In other words, it seemed like the perfect time to write this all down.


Fundamentally, vermouth is required to be 75% wine which is typically from white grapes and the remaining portion is a blend of sugar (or mistelle: grape juice plus alcohol), botanicals and alcohol. The blends of botanicals and the selection of wine differs according to the producer’s exacting (and closely guarded) recipe. Today’s top Vermouth brands, such as Martini and Rossi or Dolin, were originally developed in the 1800’s and their recipes are protected much like the recipe for Coca-Cola (which by the way, is essentially a non-alcoholic derivative of Vermouth).

Something else Gilda Radner and Betty Hutton had in common: both born in Michigan -- one in Detroit, one in Battle Creek.
Posted by Bruce Oksol at 4:16 PM No comments:


This variation in definition occurred because countries such as Canada and Mexico tend to have heavier crude oils than are commonly found in the United States, whose large oil fields historically produced lighter oils than are found in many other countries.


LOOP Sour comprises US Gulf of Mexico grades Mars and Poseidon and a crude blend called Segregation 17, named after a cavern into which the Middle Eastern grades Arab Medium, Basrah Light and Kuwait Export Crude can be delivered. The grade has been most similar to Mars in terms of API gravity over the past 12 months, averaging 0.33 degree off Mars’ typical 29.44; and from a sulfur standpoint, averaging 0.02 percentage point off Arab Medium’s typical 2.53%.

Much, but not all, information below comes from wiki.

Over 70% of national oil reserves are below 28° API  and the International Energy Agency (IEA) predicted in its 2012 report on Iraq that future production is likely to include a larger share of heavier crudes. However some of the crudes produced at the Taq Taq field in the norther semi-autonomous Kurdistan region are as light as 48° API, dubbed by Reuters as "champagne crude." See Taq Taq here.

Olivia plays midfield and defense but today was given credit for the assist with the one goal. She kicked the ball to the player who scored.
Posted by Bruce Oksol at 7:53 AM No comments: