Do you remember this well?
Full production profile: 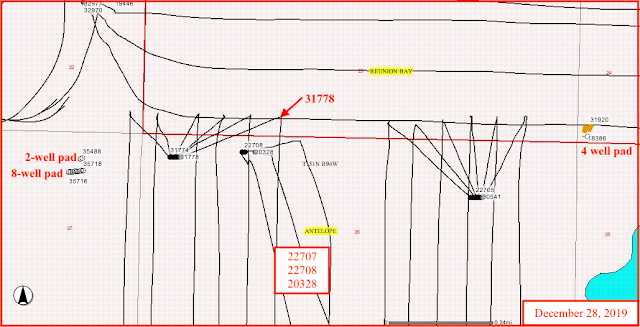 Top stories by month for the year of 2019 are here.

Permits in North Dakota, by county, by field, by operator. Posted here.

Comment: this year, 2019, has the feel of a transition year in which the US economy literally broke away from the rest of the field. One gets the feeling that "2019" is setting the stage for the roaring 20's for the US. First decade in which it neither started nor ended with a recession. First time in history that a US president has not gotten embroiled in a "new" war. US reaches energy independence. For all the divisiveness in Washington, DC, the government was still able to pass a bipartisan $1.3 trillion budget to avert a government shutdown.

Most surprising story of 2019:

The top US story:

Most exciting small non-operator in the Bakken:

Most exciting micro operator in the Bakken:

Most exciting large operator in the Bakken:

Investment story of the year:

Bakken economy (too many to list):
New (or better-understood) oil patch jargon:
Miscellaneous:

Following up that record IP.

The well:
The scout ticket: 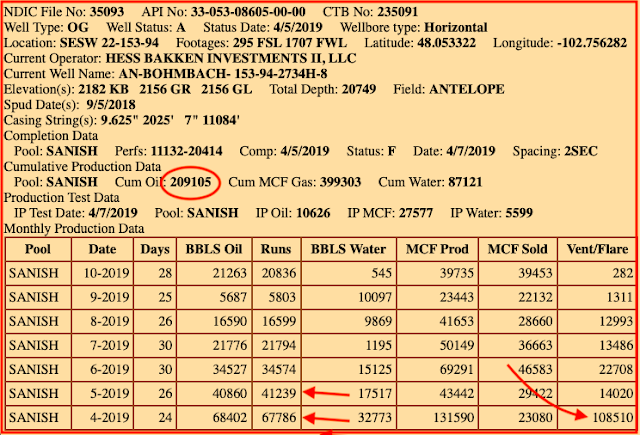 Screenshot from the file report:

The incredible WPX Rachel Wolf wells remain off line. My hunch is that they are off line because the WPX Bison wells just to the west have just been fracked. If so, the Rachel Wolf wells will be back on line within the next two or three months.

When all of these wells come back on line, it will be most interesting to see what #19973 does.

The Bison wells:
Except for the production in the first full month, 10/19, the three wells look almost identical to this:
#36018:

I track the WPX Lion wells in the Mandaree oil field at this site.

These are huge wells.

Definition of the perfect oil well: one that pays for itself in six months, then keeps producing for the next 35 years, meeting and/or exceeding its EUR.

It Appears The Whiting P Vance, Vance, And Vance Federal Wells Have Been Completed/Fracked And Are Back On Line -- December 28, 2019

I track Whiting P Vance, Vance, and Vance Federal wells at this site. If you check out that site today you will note a large number of DUCs. I've looked at a few; it appears all of these wells have been completed/fracked and will soon be reporting. Wells that were taken off line in 9/19 are now returning to production (10/19).

It appears at least of one of the older P Vance wells has reported a jump in production:

How good are Tesla's batteries?
Another way to look at this:
Forty charges per year, or about one full charge per week.

I've always said Tesla was a battery company disguised as a car company.

Tesla's gigafactory in China, from two days ago:


Tesla has built a new factory in China and intends to build its electric cars for the Asian market at the new facility. Reuters reported earlier this week that Tesla had secured a 10-billion-yuan loan in China. Tesla's stock has roared to record highs this month, and gained another 1.3% Thursday to close at $430.94.


Tesla Gigafactory 3 is a factory currently under construction in Shanghai, China, by Tesla, Inc.

The facility will produce battery cells along with Tesla Model 3 and Tesla Model Y cars, at an initial production rate target of 250,000 electric cars per year.

The Shanghai regional government approved the agreement to build the production facility in July 2018, and a long-term lease was signed for about 210 acres of land in October 2018.

Construction began in December 2018 with the installation of secure fencing and site offices. The General Assembly Building was nearly complete by August, 2019, and manufacturing line equipment was being installed for both batteries and automobiles.

News reports in August noted production could start as early as November 2019, and CNBC reports that Tesla is expected to manufacture more than 6,000 vehicles at Gigafactory 3 by year-end 2019.

Disclaimer: this is not an investment site.  Do not make any investment, financial, career, travel, job, or relationship decisions based on what you read here or think you may have read here.
Posted by Bruce Oksol at 5:07 PM No comments:


Wages for nonsupervisory employees — who make up 82% of the workforce — are rising at the fastest rate in more than a decade.

The big picture: Workers at the bottom of the pay scale have been feeling positive effects on their wages at the end of 2019 — especially when compared to those at the top.

Pay rates the bottom 25% of wage earners rose 4.5% in November from a year earlier, while wages for the top 25% of earners rose only 2.9%, per data from the Federal Reserve Bank of Atlanta.

Flashback: Hillary promised to put folks out of work; not raise wages.

I have just re-read the first four chapters of The Battle For New York, Barnet Schecter, c. 2002. I completed my first reading of the entire book some time ago. I will put Schecter down for awhile now that I've got the setting sorted out (again), as well as the geography -- land and water -- of the New York area. My notes on that book are here.

Then, of all things, while reading The Anarchy, the story of the East India Company, by William Dalrymple, c. 2019, this from page 57:


That opportunity [to "take" India"] manifested itself even as the Carnatic Wars (a series of "wars" waged between French and British trading companies in India during the 1750s] were grinding to an inconclusive end in the mid-1750s.

For it was not just in India that Anglo-French rivalry was smouldering, ready to reignite  at the slightest spark. Instead the trail of gunpowder which ignited the next round of Anglo-French conflict began far away from India, on the frozen borderlands of America and New France -- what we today call Canada --a between the great lakes and the headwaters of the Ohio River.

On 21 June 1752, a party of French Indians led by the French adventurer Charles Langlade, who had a Huron wife and was also influential among the Seneca, Iroquois,  and Micmac, led a war party of 240 warriors down Lake Huron, across lake Erie and into the newly settled farmlands of British Ohio. Tomahawks at the ready, they fell on the British settlement of Pickawillany, achieving complete surprise. Only twenty British settlers managed to muster at the stockade. Of those, one was later scalped and another ceremonially boiled and the most delicious parts of his body eaten.

The violent raid spread a sense of instability and even terror among British traders and settlers as far as New York and Virginia. Within months, regular French troops, supported by indigenous guides, auxiliaries and large numbers of of Indian warriors were rumoured to be moving in large numbers into the headwaters of the Ohio Valley, and on 1 November the Governor of Virginia sent a  21-year-old militia volunteer north to investigate. His name was George Washington. So began the first act in what Americans still call the French and Indian Wars, and which is known in the rest of the world as the Seven Years (sic) War.

This time it would be total war, and properly global, fought on multiple continents and in ruthless advancement of worldwide British and French imperial interests. It would carry European arms and warfare from the Ohio to the Philippines, from Cuba to the coast of Nigeria, and from the Heights of Abraham outside Quebec to the marshy flatlands and mango groves of Plassey.

But the part of the globe it would transform most lastingly was India.

Wow, talk about serendipity. I put the first book down having come to a great spot to do so, and then to pick up a completely unrelated book and it seems to begin exactly where the first left off.

The Enerplus wells on the "Igneous Rock" pad have been drilled to depth and are now DUCs. 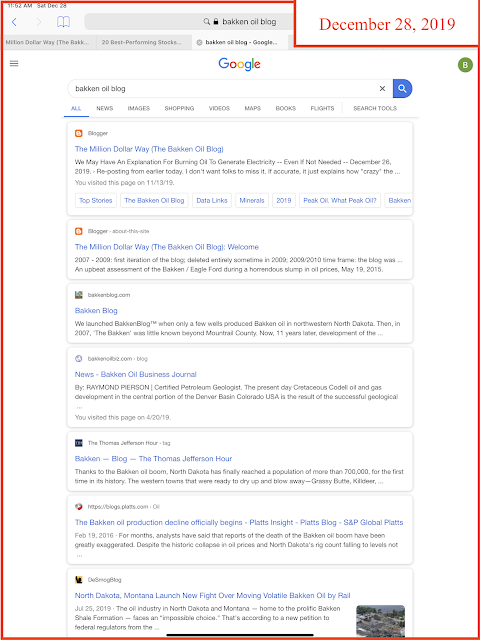 Random example of most recent Carus well coming off the confidential list, a Three Forks well. 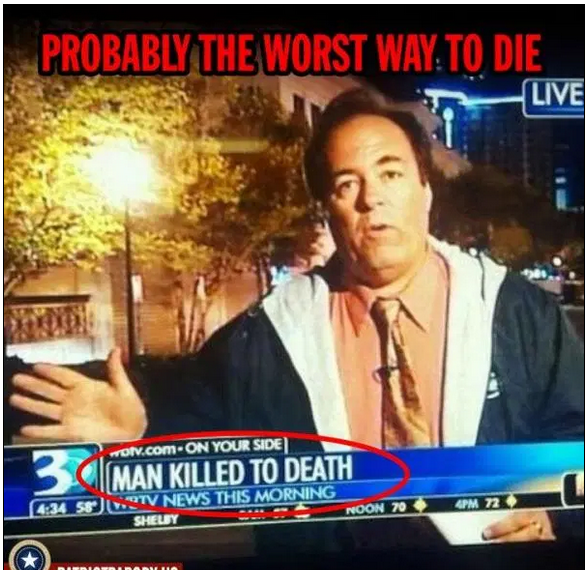 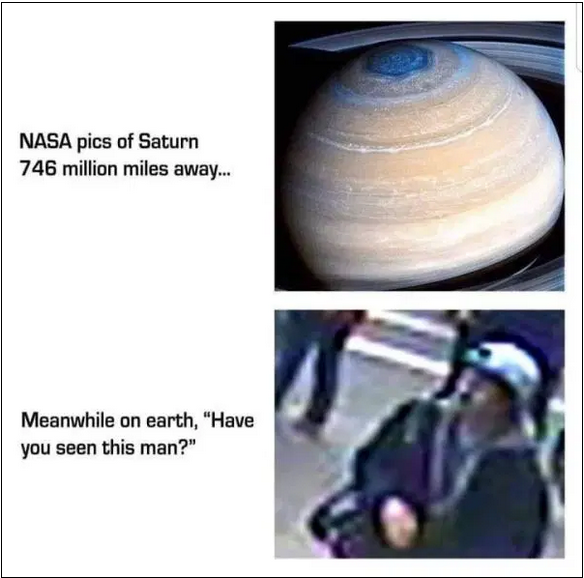 Legacy Fund. Link here. The state usually posts the deposits on the 22nd of the month; this month it was delayed to the 27th. Forgot to post it yesterday. Sorry. Hopefully it didn't cause anyone any problems. 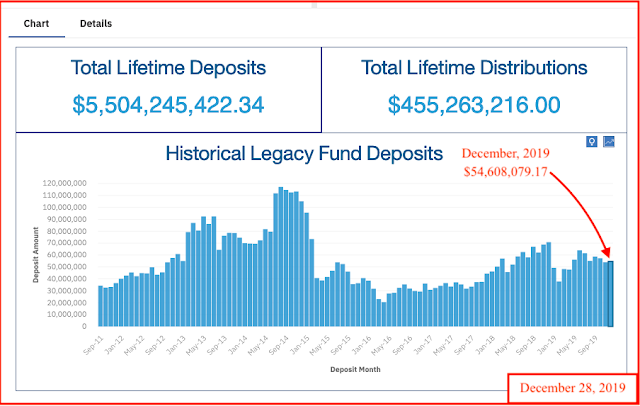 North Korea: No Christmas Eve / Christmas Day present for the US? Connecting the dots explain it. News at eleven. LOL. Too much to do but I will come back to this. And there's always a chance something yet to happen. [Forgot to get back to this: the reason North Korea did not launch any missiles over Christmas is because China told them not to.] 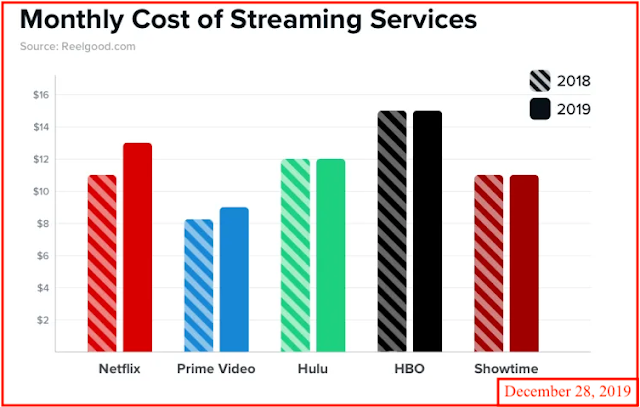 Amazon releases its annual fact-free press release. It may be fact-free, but it's also not fake news. More than I can say for CNN, MSNBC, ABC, and a host of other "news" outlets.
Posted by Bruce Oksol at 9:32 AM No comments: