Can you say "US Supreme Court"?

Texas Wuhan flu: the governor extends "sanctions." Interestingly, auto traffic at rush hour seems a bit busier than last week. I guess more folks are finding that their job is essential. Essential to keep them from going nuts at home. The city isn't making it any easier, closing city parks. I don't think the governor said anything about closing down parks. Whatever. Now we'll have five-year-olds on bikes on city streets. Whatever.


Most irritating: companies telling me "they are here to help" when they are closed and under-staffed. Whatever.

Saudi has two sources of income: oil and tourism.

Let's correct that: Saudi had two sources of income: oil and tourism.

OIL: from a SeekingAlpha contributor. Some nice data points. I will archive this article. SA articles generally end up behind a paywall. From the article:


From the time period of 2014 to 2016, Saudi Arabia attempted to crush the U.S. shale industry, believing the shale industry couldn't produce oil at a breakeven basis for less than approximately $70 per barrel. They were completely wrong in that assessment, as we all know.

It also went from a budget surplus to a record deficit in 2015 (at that time) of $98 billion. The majority of projections have Saudi Arabia with budget deficits through up to 2028.

With breakeven Brent of $84 per barrel, those projections would probably extend further if the country decides to attempt to drive the competition out of the market with more production and lower prices.

The IEA states that OPEC, from 2014-2016, lost about $450 billion in oil revenue as a result of low prices. To return to those levels or worse, at a time they're still trying to figure out how to bolster their foreign reserves and budgets, is unwise to say the least.

It's going to get even more tense amongst OPEC members when they come under enormous stress as a consequence of Saudi Arabia boosting oil production (including tapping oil reserves from storage) and exports.

TOURISM: this has previously been noted, albeit in passing, on the blog. From aljazeera:


Saudi Arabia has asked Muslims to wait until there is more clarity about the coronavirus pandemic before planning to attend the annual Hajj pilgrimage, the Minister for Hajj and Umrah said on state TV on Tuesday, March 31, 2020.

Earlier this month, Saudi Arabia suspended the year-round Umrah pilgrimage over fears of the new coronavirus spreading to Islam's holiest cities, an unprecedented move that raised uncertainty over the annual Hajj.

Both were huge revenue sources for the government.
Posted by Bruce Oksol at 8:25 PM No comments:

It's hard to believe that these are the first Bakken permits for BR this calendar year (as far as I can tell). 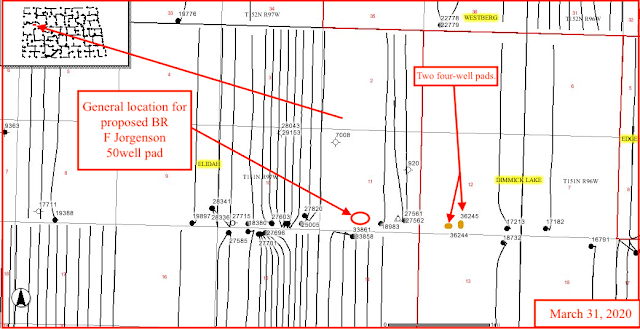 Producing wells sited in that same section:
The section line well to the west:

Way cheaper than milk. Competes with bottled water on price.

Wuhan flu, north Texas, DFW-area: I stopped by our local grocery story quite late in the afternoon. The parking lot was quite empty and not much foot traffic noted in the store. As well stocked as I've seen it with at least "everything" adequate, with a couple of exceptions. Still no paper products: toilet paper and paper towels. Plenty of whole wheat/honey wheat bread but no "white" bread (except in the bakery section. I've never seen so many eggs. Refrigerated dairy seems adequate.

On another note, the city seems to have closed down the local park. They've closed the parking lots. One can still enter the park to ride bicycles, job, walk dogs, but it sure looks like there will be a sign up tomorrow saying the park is closed.
Posted by Bruce Oksol at 3:35 PM No comments: 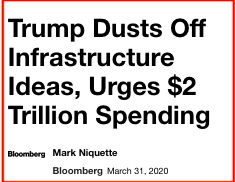 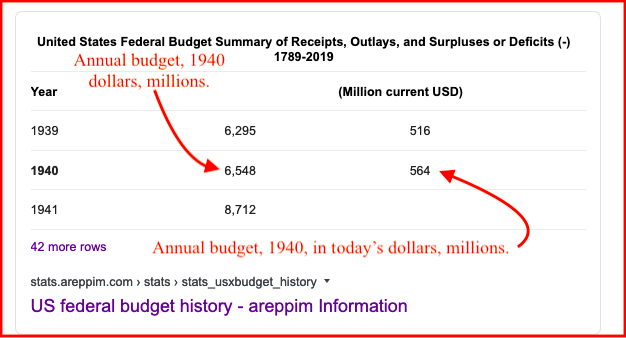 From a jack to a king. LOL.


From a Jack to a King, Ned Miller

The well:
The CLR Sorenson wells are tracked here.

A reader comments on this well.

Graphics: also at the Sorenson link above -- 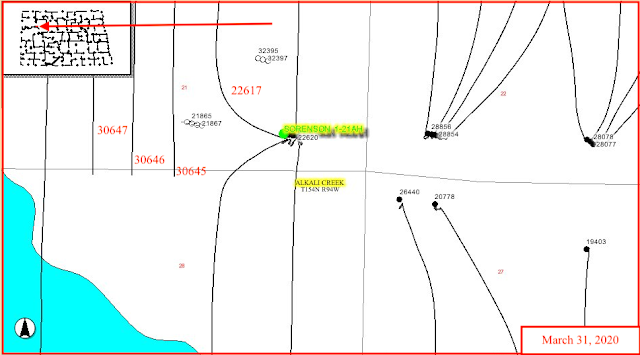 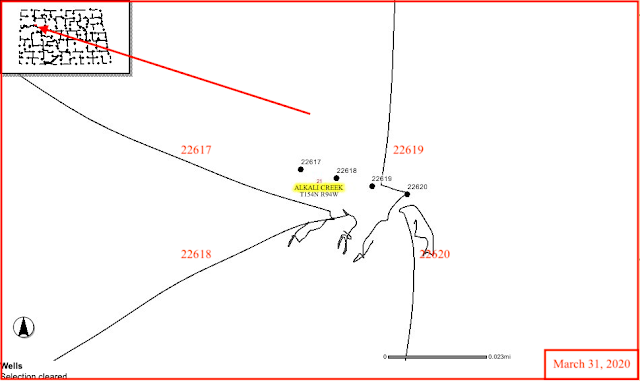 Posted by Bruce Oksol at 5:38 AM No comments:

Four huge Kraken wells were fracked/stimulate/tested on/about July, 2020. These four wells "cut right across" an old Kraken well, almost perfectly perpendicularly. Note the "halo" effect on the old Kraken well, #22563. This old well, by the way, is an incredibly short horizontal, coming in at only 14,626 feet TD..

The wells:
The old well: 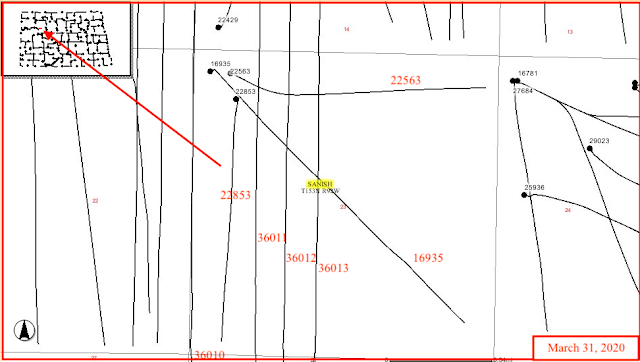 What about those two other older wells? Glad you asked:

Biden koan: another one. I can hardly wait until he posts his first haiku.


Those with a functioning memory may have thought that last week’s (~ March 10, 2020) decision by Saudi Arabia to maximise oil production to crash oil prices and bankrupt U.S. shale producers was an early April Fool’s Day joke.

Apparently, though, it is not, and collective amnesia seems to have gripped senior Saudis and other OPEC members alike about how disastrous the last Saudi Arabia-led attempt to destroy the U.S. shale oil industry from 2014 to 2016 actually was. Appalling though the consequences were last time for Saudi and its now-much-poorer allies, this time around things are likely to be much, much, worse.

The last time the Saudis tried this exact same strategy in 2014, it had a much greater chance of success than it does now.

Back then, it was widely assumed that U.S. shale producers could not produce oil on a sustained basis for a breakeven price of less than around US$70 per barrel of Brent. Saudi also had record high foreign assets reserves of US$737 billion in August 2014, allowing it real room for manoeuvre in terms of sustaining its SAR-US$-currency peg and covering the huge budget deficits that would be caused by the oil price fall caused by overproduction. In addition, Russia at that point was just an interested observer on the sidelines.

Saudi Arabia was so confident in its plan that in October 2014 during private meetings in New York between Saudi officials and other senior figures in the global oil industry, as analysed in full in my latest book on the global oil markets, the Saudis revealed that the Kingdom was willing to tolerate Brent prices ‘between US$80-90 per barrel for a period of one to two years’.

This was a 180 degree turn from the previous understanding by other OPEC members that Saudi was their champion, doing its best to keep oil prices high in order to boost the prosperity of OPEC member states. Saudi, nonetheless, at the New York meeting, made it clear that it had two clear aims in pursuing its overproduction/oil price crashing strategy. The first of these was to destroy (or at least slow down progress in) the developing U.S. shale energy industry and the second was to pressure other OPEC members to contribute to supply discipline. This marked a significant divergence from the acceptable range of prices previously stated by then-Saudi Oil Minister Ali al-Naimi as being: “US$100, US$110, US$95,’ per barrel.

More at the link. Best part of the op-ed? The opening line, "Those with a functioning memory..." Well, that certainly leaves out the Democrat presumptive nominee for president.

But wow, we're back at $100+ as the real number the Saudis need to stay solvent. They are truly in deep doo-doo.

More. A lot of typos in the article at this link, and not sure of the source, but the data points are very interesting.
It's very possible that in my lifetime I will see the fall of the House of Saud.
Posted by Bruce Oksol at 4:47 AM No comments:


Wells coming off confidential list today --None. There was no September 31 six months ago.


While the crude oil market meltdown has taken center stage in recent weeks, and for good reason, the natural gas market is bracing for its own fallout.

The CME/NYMEX Henry Hub April futures price, which was already at a multi-year low, buckled last week, falling to as low as $1.602/MMBtu on March 23, and expired Friday at $1.634/MMBtu, the lowest April expiration settle since 1995.

On its first day in prompt position, the May futures contract yesterday eked out a late-day, 1.9-cent gain that brought it back up near $1.70/MMBtu as traders continued weighing competing market factors. Gas futures earlier in March were initially buoyed by the assumption that the low oil-price environment would slow associated gas production — and it will, eventually. But that initial bullish sentiment was quickly usurped by the more immediate effects of demand losses resulting from the economic slowdown caused by COVID-19, as well as from mild weather. Today, we look at how these developments are shaping gas supply-demand fundamentals heading into the gas storage injection season.

Posted by Bruce Oksol at 4:03 AM No comments: