There are certainly some observant and some astute readers out there.

Take a look at these graphics.

I believe the proposed well pattern on those two graphics are the same; if not, the differences are very, very subtle.

Dan, earlier today, told me to take a look at a recent case before the NDIC:

Look at the graphic and see if you see the subtle difference that Dan noted: 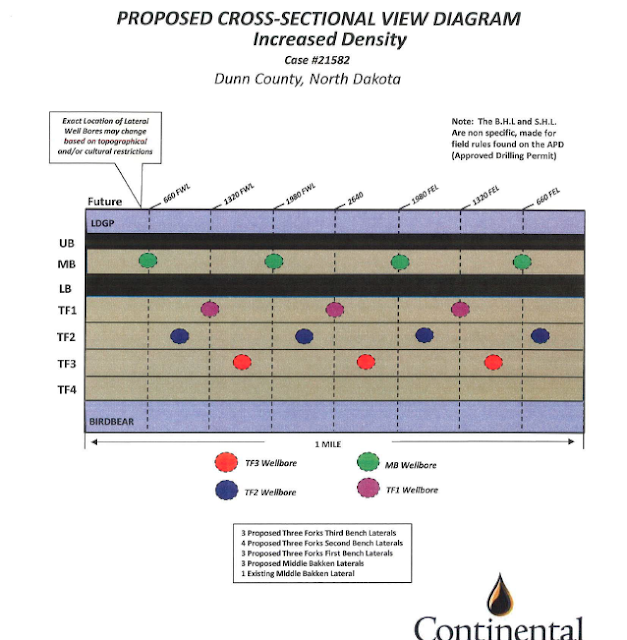 Now that I look at it again (for the umpteenth time), maybe the difference is not so subtle.

I've talked about this from the very, very beginning: how fracking should work 360 degrees radially, and should impact other horizontals if drilled within 300 feet or so. But I had not noted the new well pattern proposed by Continental Resources in this case, on the December, 2013, dockets.

In the newer, proposed configuration, none of the Three Forks horizontals are directly below the middle Bakken horizontals.

In addition, none of the TF wells are "stacked" directly in line with each other: all horizontals are off-set.

It certainly looks to me like this should optimize fracking the entire drilling unit.

See, also a recent post on XTO and KOG leading the charge on increased density projects:

Ah, The Hypocrisy Of Alarm Over Bald Eagle Deaths; ObamaCare in Massachusetts? 44,000 Have Enrolled, 309 Have Paid First Premium

I follow The Los Angeles Times fairly regularly. Its editorial slant, of course, is similar to The New York Times, but in some respects it may be "worse." I generally don't pay much attention to the LA Times. But a couple of interesting stories today.  First. on the front page, on-line:


Bald eagles are dying in Utah -- 20 in the last few weeks alone -- and nobody can figure out why.

Hundreds of the majestic birds -- many with wing spans of 7 feet or more -- migrate here each winter, gathering along the Great Salt Lake and feasting on carp and other fish that swim in the nearby freshwater bays.

Earlier this month, however, hunters and farmers across five counties in northern and central Utah began finding the normally skittish raptors lying listless, on the ground. Many suffered from seizures, head tremors and paralysis in the legs, feet, and wings.

Several of the ailing birds were taken to the mammoth Wildlife Rehabilitation Center of Northern Utah, where handlers tried to save them. Within 48 hours most were dead.

What incredible hypocrisy. The headline says scientists are alarmed over the loss of these magnificent birds and The LA Times does not mention that President Obama, with an executive order, provided 30-year immunity to slicers and dicers (aka, wind turbines) with regard to unlimited bird kills, including bald eagles. It's a very, very long article; it is quite an in-depth article and not one word of slicers and dicers.

That was on the news page.

This from the op-ed section: "Fracking" the Monterey Shale -- boon or boondoggle? The op-ed is hardly worth reading; there is nothing there that hasn't been reported a gazillion times before, most of which can be paraphrased: Californians frown on fracking. What caught my interest is that, again, this is a very, very long article, and neither North Dakota nor the Bakken are mentioned. What? But it does mention Kansas:


What began with rudimentary wells in Kansas in the 1940s [fracking] has evolved into a sophisticated technology that is being exported to China, Argentina and South Africa, even as its impact is hotly debated here.

But apparently that is correct:

The first “frack” was performed in western Kansas in 1947. What is relatively new is the combining of horizontal drilling techniques and fracking, but even this process has been used for more than a decade.


Born of the energy crisis of the 1970s, gas driller Lenape Resources flourished in western New York for more than three decades — until the revolutionary technology that sparked the nation's shale gas boom brought the industry to a screeching halt in New York under a moratorium now in its sixth year.

Today, Lenape has just five employees, down from 100 in years past. "Those five, we're trying to give them work in Pennsylvania," said John Holko, the company's president. "We're not going to be here much longer."

As another year closes with a moratorium on hydraulic fracturing for natural gas in New York and no timetable for Gov. Andrew Cuomo to decide whether to lift it, drilling interests have all but given up on the state, and environmental groups are pressing for a permanent ban.

Advancements in horizontal drilling and fracking — which releases gas from rock by injecting a well with a mix of water, sand and chemicals at high pressure — have yielded so much gas from the Marcellus Shale underlying much of the Mid-Atlantic region that gas prices have plummeted. As a result, the less productive vertical wells still allowed in New York are no longer in demand, Holko said.

Also in The Boston Globe, the state's ObamaCare website is doing so badly that Massachusetts and Vermont have suspended payments to the developer:


Even as President Obama’s health insurance website limps to recovery, at least two states that used the same contractor and are still plagued with malfunctions — Massachusetts and Vermont — are taking preliminary steps to recoup taxpayer dollars.

Massachusetts officials are reviewing legal options against CGI Group, a Montreal-based information technology company, and will make recommendations on how to seek financial redress at a Jan. 9 meeting.

So far, the state has paid $11 million of its $69 million contract with CGI. It will not pay a penny more until a functioning website has been delivered, said Jason Lefferts, spokesman for the Commonwealth Health Connector, the state’s insurance marketplace.

However, this is the bigger story, and one I have blogged about before. Just because one has enrolled does not mean one will actually buy the "selected" product. Look at this data point, also from The Boston Globe:


By Thursday afternoon, just 309 people had paid their first premium to fully enroll in a plan through the Connector. More than 44,000 people have completed applications to date, but many others have faced roadblocks in getting that far.

The administration can extend the deadline as far into the future as they want, but no one is covered if they haven't paid their premium.
Posted by Bruce Oksol at 10:02 AM No comments: