A reader sent a nice update regarding the MRO Tyler wells.


It will grow on you. Trust me.


The only other carrier that is refusing to accept such payments is Blue Cross Blue Shield of North Dakota, according to a CMS official.

The courts are not going to look kindly on BCBS Louisiana, North Dakota.
Posted by Bruce Oksol at 5:19 PM No comments:

A reader is requesting help finding, on the internet, the rig drilling schedule, specifically for H&P with Marathon.

I know NDIC has a very limited schedule for the next drilling location for actively drilling rigs, but it is very, very limited.

The reader thinks there is a more comprehensive list. Any thoughts?
Posted by Bruce Oksol at 4:52 PM No comments:

The Number Of Active Rigs In North Dakota Remain High; Idle Rambling On The Price Of Oil


Idle Musings On The Price Of Oil

Going into next week, it will be interesting to see if the price of crude oil continues to melt up;  WTI closed this past week at just around $100/bbl. It was expected that the price of crude oil would rise once the Keystone XL 2.0 South started flowing; it started flowing on January 22, 2014 (though the company started filling it on December 7, 2013), and the price of oil started moving up as predicted, though hardly noticeable in the big scheme of things. It will take awhile for folks to get a feeling for the "new" Cushing. A lot of oil has to go to Cushing to make up for all that the Keystone XL 2.0 South is taking out.

The major factors affecting the price of oil:
Of the five, I think the US economy six months out as telegraphed by the Fed's actions is the most important. On a day-to-day basis, all things being equal (e.g., no report of a war breaking out in the Mideast, it is the strength of the dollar).

Most recent data available, the week ending January 31, 2014, the EIA summary:
30-second sound bites:
That explains why gasoline continues to fall in price. Gasoline is now below $3.00/gallon for the first time in a long time in the Dallas, Texas, area.

Remember all that hand-wringing that US refineries were not able to process light, sweet oil coming out of the Bakken? The fact that imports of crude are decreasing significantly and gasoline inventories are increasing suggest to me that US refineries are doing just fine. It should be noted that the US does continue to import gasoline.

If crude oil inventories continue to remain in the upper half of the average range, I assume we will see a continued fall in imports. I assume some imports are contractually required, and as those contracts are filled/expire, imports will continue to fall.

KOG's Smokey Wells And CLR's Wahpeton Wells Have Been Updated

KOG's Smokey wells have been updated with screen shot of the horizontals.

CLR's Wahpeton wells have been updated with screen shot of the horizontals.

Banks oil field has been updated.

Regardless of what side of the aisle you are on, this is a great editorial on ObamaCare from the weekend edition of The Wall Street Journal.

A bit from a very, very long article:


As the CBO admits, that's a "substantially larger" and "considerably higher" subtraction to the labor force than the mere 800,000 the budget office estimated in 2010.

The overall level of labor will fall by 1.5% to 2% over the decade, the CBO figures. Mr. Mulligan's empirical research puts the best estimate of the contraction at 3%.

The CBO still has some of the economics wrong, he said in a phone interview Thursday, "but, boy, it's a lot better to be off by a factor of two than a factor of six."

The CBO's intellectual conversion is all the more notable for accepting Mr. Mulligan's premise, which is that what economists call "implicit marginal tax rates" in ObamaCare make work less financially valuable for lower-income Americans.

Because the insurance subsidies are tied to income and phase out as cash wages rise, some people will have the incentive to remain poorer in order to continue capturing higher benefits. Another way of putting it is that taking away benefits has the same effect as a direct tax, so lower-income workers are discouraged from climbing the income ladder by working harder, logging extra hours, taking a promotion or investing in their future earnings through job training or education.

The CBO works in mysterious ways, but its commentary and a footnote suggest that two National Bureau of Economic Research papers Mr. Mulligan published last August were "roughly" the most important drivers of this revision to its model. In short, the CBO has pulled this economist's arguments and analysis from the fringes to center of the health-care debate.

For his part, Mr. Mulligan declines to take too much credit. "I'm not an expert in that town, Washington," he says, "but I showed them my work and I know they listened, carefully."

It's hard to read, I suppose, but the bottom line is this: ObamaCare will help America move toward the Greek model of economics -- laid back and enjoying it, relying on immigrants to fill the gaps.


"When you pay people for being low income you are going to have more low-income people."

And to where do low-income people migrate?

It won't happen overnight, but eventually these folks will move to the south where inexpensive energy will offset rising health care premiums and deductibles. The cost of living has historically been much lower in Florida, Alabama, Mississippi, and Texas compared to New England, New York City, and Baltimore. Folks will enjoy a Mediterranean lifestyle because it will become acceptable. It will be a disincentive to earn more money; earning even an extra dollar at the margins could cost one an additional $20,000 in health care premiums for one's family. Breadwinners will weigh a raise in salary or wages against the increase in taxes and health care expenses.

Obamacare will keep wages down, and, in fact, immigration will be needed to keep the country functioning. Employers will be the big winners:
Of the three, the ability to budget is absolutely, without question, the most important.

Disclaimer: this is not an investment site; do not make any investment decisions based on what you read here or what you think you may have read here.

Everything about ObamaCare suggests the gap will widen between the "haves" (investors) and the "have-nots" (the non-investors).
Posted by Bruce Oksol at 10:06 AM No comments:

Comparing Oil Activity In The Williston Basin: The South Red River B In Cedar Hills Vs The Bakken Banks

This is for newbies. With all the talk about the Bakken, it is easy to forget how incredible the North and South Red River B wells are in southwestern North Dakota. Here is a sampling of wells drilled in 2005 and 2006:

All of these wells were drilled in 2005 - 2006 (with the exception of the last one listed); all are still active; many have shown no decline in productivity. Many of these wells will hit one million bbls in less than a decade. And this is just primary production. Operators are still drilling an occasional Red River well.

It's hard to say how much activity we would be seeing in this area today if the Bakken had not been successful. It was at this very time that drillers were starting to test the Bakken in North Dakota more seriously. It took quite a few non-economical wells before the Parshall well in 2007 that started everything in North Dakota. 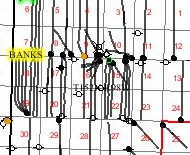 Lots of drilling left to do in the Banks.
Posted by Bruce Oksol at 9:20 AM 2 comments:

It looks like we have a second nominee for the Geico Rock Award: a University of Jamestown biologist. The biologist has concerns about golden eagles in the Killdeer Mountains being electrocuted by a proposed transmission line through the area. This is the first time I have heard concerns for any birds from this North Dakota biologist. North Dakota competes, among the other 49 states, for bragging rights in the number of wind farms that are directly in the fly ways of migratory birds.


Biologists are concerned that a proposed power transmission line that would skirt the southern Killdeer Mountains in western North Dakota could disrupt nesting habitat for protected golden eagles.

A research biologist said the eagles around the Killdeer Mountains are of special concern because they exhibit rare paired hunting and group hunting behavior, never before documented in golden eagles.

Marguerite Coyle, an assistant biology professor at the University of Jamestown who has studied the golden eagles since 2002, said placement and construction of the power line could disturb nesting sites. She’s also concerned eagles could be electrocuted or be killed by striking the lines in flight.

Not one mention of all the wind farms in North Dakota. Nada. Nil. Zilch.


Eagles have been protected by federal law since 1940.

Not really. Under President Obama, the Interior Department granted 30-year blanket immunity to wind farm developers whose turbines have killed any protected birds.

The hypocrisy is striking. The Geico Rock Award nomination rightly deserved. But the competition is likely to be tough this year.

As long as we are on the subject of birds flying into wind turbines, the placement of these two headlines in The Los Angeles Times this morning was priceless: 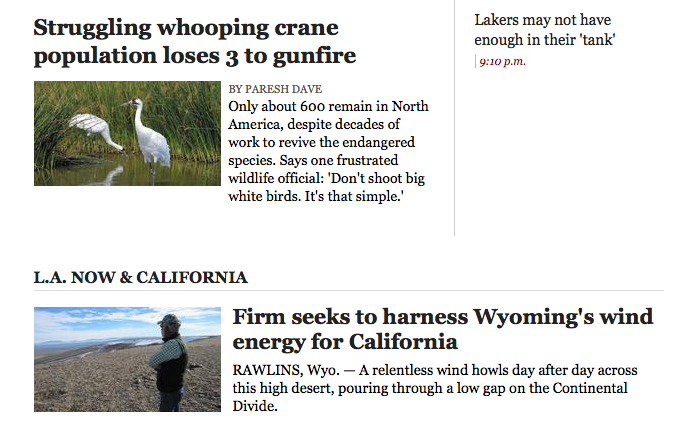 I captured the screen shot at 5:13:13 this a.m. I was reading the iPad in bed when I saw it. I immediately jumped out of bed to get it on the MacBook Pro. I'm glad I did. Sometime between then and now (less than four hours later) the story on whooping cranes has been removed. Even the LA Times editor noted the "problem."

Neither story, by the way, mentioned the controversy over wind farms and migratory birds.