Futures mean squat, but considering, the numbers are quite remarkable. Right now, as of 10:50 p.m. ET, futures:

A reader suggested I take a look at these wells for completion strategies. Raw data here; done quickly; there could be typographical and factual errors. If this is important to you, go to the source. I will come back to these later. The wells: 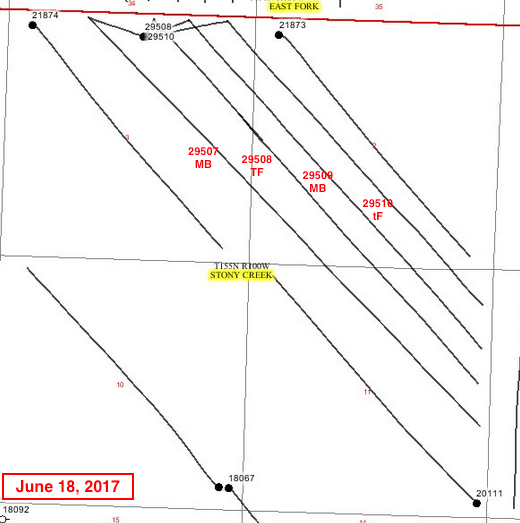 This was the recent price at the Watford City transfer point (Northern Border) as per the recent Director's Cut.


Not fake news: poll. I don't watch mainstream media but I doubt this is being reported.

Disclaimer: I love Amazon. I "accidentally" signed up for Amazon Prime and love it.

The price of membership will probably increase; I doubt that will adversely affect the overall number of memberships.

Disclaimer: I never shop at Whole Foods. When we lived in San Antonio, there was a Whole Foods grocer within walking distance of our house; we shopped there once in awhile (they are really, really nice stores) but they were just too expensive. And in Texas, Central Market, HEB, Tom Thumb, and Albertson's are all great alternatives to Whole Foods.

Some time ago I posted:


Yahoo!Finance posted this story a few hours before Amazon announced quarterly earnings: why it doesn't matter that Amazon's most popular service costs it billions. Data points:
More at the link.

By the way, I don't know what a "non-Prime member" is -- certainly it can't be everyone who has ever ordered anything from Amazon. Whatever.

I am fascinated with the Amazon-Whole Foods story.

Once Amazon made the decision to buy a grocer, it's interesting to ask why Amazon selected Whole Foods. It helped that activist investors in Whole Foods were looking for a buyer. On the other side of the coin, Amazon would certainly want to look for a grocer that "fit." According to the business media, almost everyone who shops at Whole Foods is also an Amazon Prime member. If the deal goes through, Whole Foods becomes the company store for Amazon Prime credit card holders. LOL. Margins already marginal in the grocery business and Amazon Prime get 5% off Amazon purchases; whether this will apply to in-store purchases is yet to be seen. But imagine if one gets 5% cash rewards on all grocery purchases. The average American family spends $4,000/year for groceries (and from the linked site, it suggests this is not simply groceries, but all things one buys at a grocery store these days) amounts to $200/year (5% cash-back) -- a trivial amount, except that it's always nice to see.

Omaha Steaks, on the other hand, and other retailers, rewards customers with points that can only be used at Omaha Steaks, making those retailers less appealing. Speaking of Omaha Steaks, the "word on the street" is that Costo has some of the best meat selections out there, and certainly, based on my experience with frozen steaks from Omaha, freezing is not an issue when it comes to perishables, unlike, fruits, vegetables, and flowers.

The "go-to" credit card in my wallet is the Amazon Prime credit card. I don't know if it's metal or not, but it is heavier than any of my other credit cards, and several retail clerks have commented on how heavy it is. It does get one's attention. I assume other "high-end" credit cards to the same thing.

I assume credit cards are a huge money-maker for those that issue them. I assume that most folks who shop at Whole Foods use their Amazon Prime credit card if they use a credit card, and it's hard to believe that Jeff Bezos didn't take that into account when he announced plans to buy Whole Foods.

So much of this seems about Jeff Bezos asking: if we buy a grocer, which grocer do we buy that our Amazon Prime members like the most? It just seems that in the retail arena of his business, Amazon Prime is where over-riding interests lie.

I think it will be quite interesting to see how Amazon "leverages" Whole Foods if the regulators approve the deal. Trump will everything he can to stop the deal based on his campaign rhetoric. so we'll see.


Yet if there’s one thing I’ve learned about Jeff Bezos, Amazon’s founder and chief executive, after years of watching Amazon, it’s that he doesn’t spend a lot of time predicting future possibilities.

He is instead consumed with improving the present reality on the ground, especially as seen through a customer’s eyes. The other thing to know about Mr. Bezos is that he is a committed experimentalist. His main way of deciding what Amazon should do next is to try stuff out, see what works, and do more of that.

So the best way to think of this deal is to look at Whole Foods as a kind of guinea pig for Amazon — a pricey, organically sourced one, perhaps, but a guinea pig all the same.

The article does note this:

The Whole Foods deal represents less than 3 percent of its $470 billion market cap: not just a guinea pig, but a cheap one, too.

A few weeks ago, when discussing the demise of big box stores in the US, a "talking head" on CNBC suggested that for retail to survive, a focus on "destination shopping" is a must. I am curious how Bezos plans to improve the grocery shopping experience at Whole Foods. Or is he is simply looking at Whole Foods as distribution points?

I think the sell-off in the other grocers was completely over-done. I wouldn't touch shares in some of the grocers, but certainly this offers a buying opportunity in some. WMT, down 5%, is selling at a P/E of 17 with a dividend of almost 3%. WMT will hardly be affected by Amazon-Whole Foods. And, there's always a possibility the Amazon-Whole Foods deal does not get approved. Especially if there is any suggestion that the Russians were involved.

Does this really surprise anyone? Next time you visit Walmart, point out to your spouse the customers you see walking up and down the aisles that are likely to order on-line from Walmart ... okay, stop laughing.

Disclaimer: I shop at Walmart frequently, so if you see me there, ... nope, I don't order on-line from Walmart -- but I do from Amazon....

I assume this has been something Amazon has offered for quite some time, but I saw it for the first time today.

I ordered a single item. It was a rare item, not easily found, except perhaps through Amazon. They probably have few of these items in stock and may be in a fulfillment center far from where I live. With Amazon Prime, they can ship this single item to me but it will be quite expensive (for a single, far-away item). So, Amazon tells me that if I forego the two-day Prime delivery, and have it sent the old-fashioned way, they will credit my account $5 when the item ships.

The item set me back less then $22 so a $5 discount was not trivial, and instead of getting the item on June 20th, I will get it June 25th or June 27th. I didn't care if I didn't get it until August.

If the Amazon-Whole Foods deal goes through, Mark Cuban will be seeing a lot more Amazon employees.

... in the past few months, have we heard much from or about the following global hot spots?
On top of all that, the southern border of the US seems to be very, very quiet.

About a year or so ago, our younger daughter wanted Lego's new Disney Castle. It was constantly "temporarily sold out," but eventually we were able to buy not one, but two sets. Yes, call us crazy. I don't remember the exact price Lego sold them for -- I believe $349 -- but during those periods when they were "temporarily sold out" they were "going for" $1,000 over on eBay.

Now, the same thing with a new Lego offering: the NASA Apollo Saturn V. And, yes, that is on our list to watch.
Posted by Bruce Oksol at 7:06 AM No comments: