Posted this afternoon over at Business Insider, the fastest growing counties in the USA: 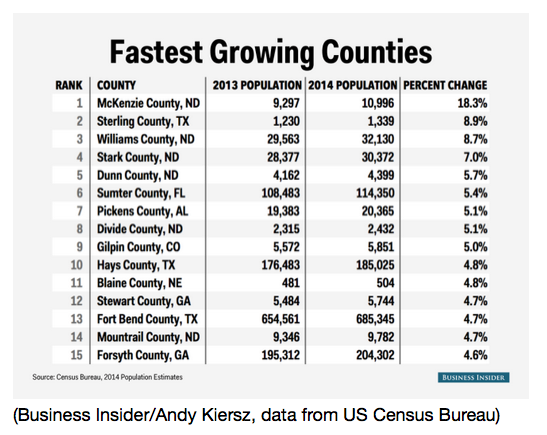 Blaine County, NE, from 481 to 504. Our granddaughter's water polo meet today was in a natatorium that seats 706 spectators.
Posted by Bruce Oksol at 7:31 PM No comments:

Lots to talk about --

President Obama golfing with a Halliburton director. Lots of story lines. Google it.

And just a reminder: US consumption of solar electricity in 2014 rounds to zero percent.

Bakken wells coming off the confidential list over the weekend, Monday:

Posted by Bruce Oksol at 3:26 PM No comments:

November 12, 2015: I'm losing track of the scorecard -- who is on whose side.  The map below hardly helps. Iran is on the ground in Syria trying to shore up the Iranian government by fighting ISIS. Today it was reported that ISIS claimed responsibility for two huge suicide bombings in Beirut, in a predominantly Shi'ite neighborhood.


A fiery double suicide bombing terrorized a mostly Shiite residential area of southern Beirut on Thursday, ripping through a busy shopping district at rush hour. The Lebanese Health Ministry said at least 43 people had been killed and more than 200 wounded in the worst attack to strike the city in years.

March 30, 2015: Fiscal Times has one of the best updates/explanations on Iran. Much was written but this speaks volumes:


The Saudi actions began in the small Shiite-majority kingdom of Bahrain, which is ruled by a Sunni royal family. The Saudis provided a small contingency force to suppress the Bahrainis who rose up against their government in 2011. In that case, the Saudi motivation to keep a Sunni government in power was combined with the fear that the fall of the Bahraini royal dynasty would open the door to similar uprisings in Saudi Arabia and other Persian Gulf countries. Add to that the presence of a suppressed Shiite minority that lives in the oil rich eastern region of the Kingdom and the fear that Iran could control Bahrain — all were factors in the Saudi decision to act in Bahrain.

The media's 30-second soundbite suggests Saudi Arabia is homogeneous: Sunni. In fact, the map below certain gives one pause: the Shi-ite presence is not only significant in geographic expanse, the location of the Shi-ite sect in Saudi Arabia has to be concerning for the princes. 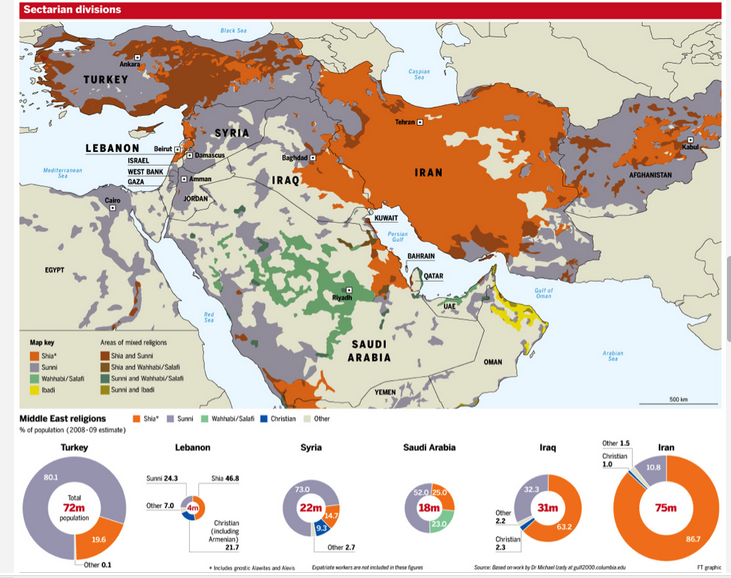 Later, 1:18 p.m.: This is embarrassing to post; everyone knew but me. I've been struggling to find the connection between President Obama and Iran. It's easy to understand why the president will side with Iran when it comes to Israel, but I've been struggling to figure out why Obama sides with Iran (Shi-ite) over Iraq (Sunni). It's well known that President Obama, regardless of where he was born, was raised in a Muslim community through kindergarten and into his elementary school years. But his was a Sunni upbringing (that is also well established). So, the conundrum (not to be confused with corundum, which is a ruby or sapphire) was why Obama was on the side of the Shi-ite Iranians.

I am very, very embarrassed. The answer was obvious. I might have known at one time; if I did, I forgot. The dot to connect: Valerie Jarrett. Ms Jarrett was born in Iran and lived there for five years, through kindergarten (everyone one needs to know in life, one learns in kindergarten). She grew up learning to speak French and ... drum roll ... Farsi (Persian). [Some have said "you are what you eat." Others say your heritage lies in your language.]

The dots are all connected. I can go to bed happy-er tonight.

[A big "thank you" to the reader who sent me this link -- I read very little of it; but it put me on the path to Valerie.]

And to think, President Obama and Valerie Jarrett were oh, so close. That's why Obama was going to go golfing this weekend -- a celebratory round of golf with a Kerry announcement that the Iranian deal was signed, sealed, and delivered.

It will have to wait.

Sealed with a kiss or return to sender?


... most of Congress may still view Iran as an axis evil, but a few brave analysts are starting to pitch it as something else: the next great emerging market.

"Iran is the largest economy in the world by far that remains cut off from global markets ... it's like Turkey but with 9% of the world's oil reserves."

... any nukes-for-sanction deal will throw open Iran's investment gates whatever the next US administration might do. European and Asian capitalists will not turn back so long as Tehran keeps its end of the bargain [which won't be difficult].

They will capitalize on the country's heretofore hidden advantages -- a population of 81 million with a vigorous median age of 28, wages as low as Vietnam's but much better education, and a diversified economy that has learned to make everything from cars to vodka [an Islamist nation] during decades of isolation.

When one reads that, one almost gets the feeling that Soros, et al, are advising Kerry and Obama.

Years and years ago, in a different world far away, one of our first friends in a new assignment was Iranian -- he and she were living in northeast North Dakota, most likely Grafton, and if not Grafton, probably Grand Forks. I always got the feeling the Iranians and Americans could have been great allies, then. It will be interesting to see how current events play out.

If sanctions come off, and money flows to Iran, the writing is pretty much on the wall. A unified Iraq is history. Saudi Arabia remains the prize.

Oh, by the way, the answer to the pop quiz: the population of Germany is 81 million. Also.

On more than one occasion I have blogged on Tim's Vermeer (e.g., here). It remains on my top twenty  (the second ten) list of DVD movies.

In this week's Wall Street Journal Review, "Through A Glass, Brightly," a book review of Eye of the Beholder, by Laura J. Snyder, c. 2015. The sub-heading: Antoni van Leeuwenhoek and Johannes Vermeer were neighbors in Delft. Still, no one knows if they ever met.

So, did the reviewer (Jonathan Lopez) or the author, Laura Snyder mention Tim's Vermeer? Not that I can tell, unless I missed it. I'm dismayed to say the least. Neither Lopez nor Snyder know as much about the subject as one would expect. A simple google search would have brought Tim's Vermeer to their attention (as well as that of Hockney) on the first page of hits.
Posted by Bruce Oksol at 10:43 AM No comments:

Email ThisBlogThis!Share to TwitterShare to FacebookShare to Pinterest
Labels: Persia_Empire

Some nice data points for fossil fuel. Remember: solar energy consumption was zero percent (when rounded to the near nearest whole number) in 2014. This was a 1.7% increase over the prior year. There are two ways to make money on solar energy: a) through tax credits; and, b) being paid to make speeches on solar energy.

Anyway, here's the WSJ take on a fossil-free world: http://www.wsj.com/articles/donald-j-boudreaux-fossil-fuel-free-is-no-country-for-the-poor-1427493369.

The article is full of data points. This is a typical observation:


For hundreds of millions of desperately poor people in China, energy-fueled industrialization is the best hope for a better life. Asking the Chinese government to reduce carbon emissions means asking them to commit millions of their people to poverty, condemning them to a hand-to-mouth lifestyle. “Many people think that China should take the lead for driving the clean [energy] revolution,” Wang Yi, a climate-change expert at the Chinese Academy of Sciences, told a United Nations forum on sustainability in 2012. “But China is facing a lot of challenges.”

The same could be said of India.

Disclaimer: this is not an investment site. Do not make any investment, financial, relationship, or travel decisions based on anything you read at this site or anything you think you might have read.


Bakken and Three-Forks drilling economics are largely based on the price of oil. Crude produced from the Bakken and Three-Forks formations have been fetching a steep $10-$15 discount to WTI, which has exacerbated the decline for oil producers in the region. The number of oil rigs operating in North Dakota has been more than cut in half over the past year, and now sits at 98. This is the lowest number since March 2010. North Dakota's oil production fell from its all-time high of 1.23 million bo/d in December 2014 to 1.19 million bo/d in January 2015.

Originally, ONEOK Partners was forecasting to generate $1.31 billion-$1.47 billion in distributable cash flow [DCF, the cash left over after costs that an MLP can distribute to unitholders] this year. That was reduced to $1.08 billion-$1.26 billion when management updated ONEOK Partners' guidance in its Q4 2014 earnings release.

Slightly higher gathering and processing volumes mitigated only a portion of its exposure to lower prices. Natural gas liquids prices, especially for butane and propane, trade in tandem with oil prices. When oil fell, so did NGLs prices, which negatively impacted ONEOK Partners' commodity and differential based operations.

I can't remember if I posted this article. I don't think I did. The link was sent to me by a reader -- as are most great stories that get linked at the post. Thank you.


BNSF began a move Wednesday to have all of its oil trains reduce speeds to 35 mph through all municipalities with 100,000 or more more residents. The speed reduction is temporarily in place until its customers phase out DOT-111 tanks cars from service, BNSF spokesman Mike Trevino said Saturday. Phasing out of the older cars, which will be replaced by CPC-1232 railcars to meet federal safety standards, is expected to begin in May, and BNSF hopes to complete the process by the end of the year. When that happens, BNSF will reconsider the speeds.

The shipping companies, not BNSF, own the cars, so the railway company has to wait on its customers to make the transition to the newer cars. The move was a voluntary part of an agreement with the U.S. Department of Transportation.

You’ve more than doubled the number of people burning and breathing the atmosphere in the last two decades, I mean, that’s your problem. So we need to reduce the human population… by the way, war is completely ineffective, ebola will not do it.”

I have not verified if that is an accurate quote or if it taken out of context. If accurate, he must have been off his meds. If accurate, hopefully he is never hired by Germanwings.
Posted by Bruce Oksol at 9:11 AM No comments: