September 4, 2016: Oklahoma shuts down salt water disposal wells in 514-square-mile area around epicenter; the fate of another 211 square miles under federal jurisdiction will be decided by EPA. I do not know if that affects SCOOP/STACK but 500 square miles is, but a 20x20 mile square is 400 square miles, and from the map below, SCOOP/STACK are more than 20 miles from the epicenter.

If it is unrevised, 5.6 ties the Oklahoma record previously set in 2011, epicenter at Prague. Prague is in the same general area as El Reno, Stillwater, and Pawnee. Prague seems to get more than its fair share of strong earthquakes in Oklahoma. Prague is about 50 miles east of Oklahoma City and would also be outside the SCOOP/STACK area as seen on map below.

Later: USGS has confirmed that, based on the aftershocks, there is a previously unknown conjugate fault that has been activated.

There are recent stories suggesting that efforts to minimize smaller earthquakes has worked. Data suggests there has been a significant decrease in smaller earthquakes in 2016, but the number of earthquakes greater than 4.0 seem to be increasing, or more notable. The jury is still out with regard to earthquakes trends this past year.

Link here. Where was it in relation to STACK and SCOOP?

Epicenter:
Felt from Omaha to Dallas.

I did not feel it, but then I was up and cooking cookies.

Quickly done. Perhaps better graphics later. If I read the map correctly, and if the data source for SCOOP/STACK is accurate, it appears the epicenter was outside the SCOOP/STACK but I cannot say for sure: 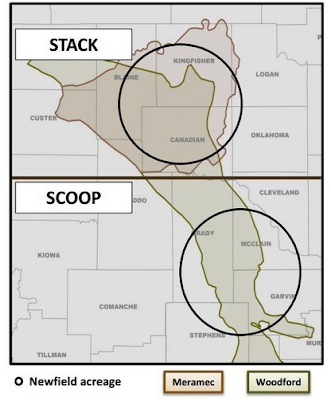 Epicenter: up near Pawnee, far to the northeast of Oklahoma City; at the tip of the red arrow.
STACK/SCOOP: in the area outlined by the octagon.

It appears the STACK/SCOOP is within the octagonal area. If so, the epicenter was outside. What we need now is geologic information regarding fault lines and historical information the area of the epicenter.

Of interest from history of Oklahoma earthquakes:


On February 16, 1956, a shock at Edmond broke windows and cracked plaster (VI). It was also felt strongly at Guthrie, Oklahoma City, and Pawnee.

Pawnee is the closest urban area to the epicenter of today's reported earthquake.

The first earthquake in Oklahoma was recorded in El Reno, just a few miles west of Oklahoma City, in 1918.

I don't understand all of this (at the link below regarding hedges and graphs), nor do I care to learn, but I agree with the bottom line. US oil producers are "content" with mid-$40 oil.

The article is here. But it goes along with what the CEO of Pioneer Natural Resources said recently. Operators in the US are making money on $40 oil. It may not be much but it's enough to tide them over until things get better. Even the major oil companies are coming around to on-shore shale oil (e.g., Shell).

Saudi Arabia and the other mideast oil-producing countries cannot survive on $40-oil.

Three articles on language for the granddaughters to read.

It started with an interview in today's WSJ which led to two other articles.

The second article is a book review in yesterday's New York Times, "Tom Wolfe Raises His Voice in an Account of Human Speech."

My current interest in re-learning / re-studying evolution was John Hands' CosmoSapiens. I've posted notes about CosmoSapiens a few times on the blog.

I haven't read Tom Wolfe's new book yet. I will check it out at Barnes and Noble before deciding to buy it. The title, The Kingdom of Species is very, very interesting.

I don't know if Wolfe is suggesting this, or if actually puts it in the book, but it certainly is an interesting thought. Smart people who do these things, say there are three kingdoms of the living: arachaebacteria, eubacteria, and eukaryocytes.

One wonders if Tom Wolfe is suggesting that there should be, in fact, four kingdoms, adding the kingdom of speech. It's a provoking thought.

Again, having not read the book, I don't know where Wolfe takes us.

Apparently, the book will come down to Noam Chomsky's "theory" of language and Tom Wolfe's thoughts.

Chomsky, as I understand him, says language is innate. Humans have built-in wiring that is the basis for thought. Somewhere along the line of evolution, apparently with the brain's thought process evolving along with the human physical form, that built-in language wiring also evolved.

Tom Wolfe, it seems, is suggesting that language did not evolve. But I don't think he provides an alternative to Chomsky's thinking.

There is an analogy here.

It is now pretty much agreed by all those who study these things that eukarocytes did not evolve in the classical sense. Eukarocytes arose when bacteria of one sort "swallowed" bacteria of another sort.

Animal cells trace their origins to bacteria that engulfed a bacterium that has now morphed into what we call mitochondria. The critical metal for mitochondria: iron.

Plants cells trace their origins to bacteria that engulfed a bacterium (probably a cyanobacterium) that has now morphed into what we call chloroplasts. The critical metal for chloroplasts: magnesium.

It sounds like Tom Wolfe might be suggesting something similar. The fourth kingdom, the kingdom of speech, would trace its origins to a ancestor that engulfed "something" that morphed into allowing speech to develop.

That "something" is unnerving. As the WSJ interviewer/writer notes: that sounds a lot like "creationism," which Tom Wolfe vehemently denies.

Hopefully Barnes and Noble has the book on its shelves today. If not, they "can always order it."
Posted by Bruce Oksol at 8:39 AM No comments: