This was released two days ago. I missed it. An alert reader caught it. From the CBC: the Canadian National Energy Board is "on board" with Trans Mountain. The NEB approves updated/modified permits to allow Trans Mountain to begin construction of terminals at Burnaby. Regulator says the approved variance application will significantly improve safety at the terminal.

For those following the action, the judge monitoring the protesters has made it clear that he's a no-nonsense judge. We should see some great photos, some great stories coming out of Burnaby in the next few weeks.

These are the kinds of races that "kill" NASCAR.

The announcers keep hoping there is a "yellow" so that everyone starts "even" again, with five laps to go.

With three laps to go, the announcers said that the leader was "coasting."

With one lap to go, Truex, Jr, ahead by 14 seconds; Harvick, #2; then Bowyer, Elliott, Kyle Busch and Kurt Busch. The announcers said Elliott drove so well that he should consider it a "win."

The race itself looked like what I used to see on the autobahn on any given day in Germany, decades ago.

My wife missed the NASCAR race. She and our middle granddaughter participated in a two-day art workshop.

This is the painting that my wife did over the weekend.

It's not for sale. 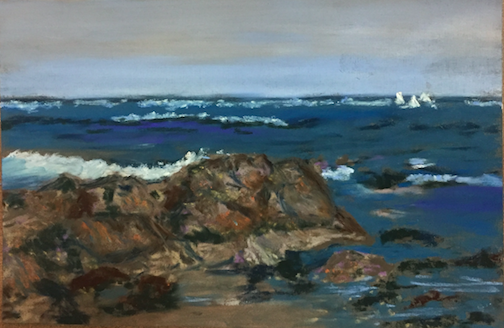 Our middle granddaughter hard at work: 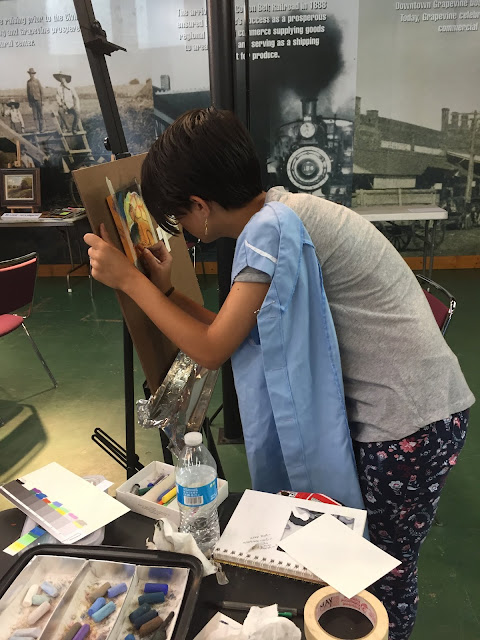 Posted by Bruce Oksol at 2:03 PM No comments:

The Turks go to the polls today. Let's see, they must be about eight hours ahead of us -- so, I wonder who ABC has projected as the winner? I just checked. No early results yet. [Later: Erdogan wins. Again. Surprise. Surprise. I'm shocked. Shocked. I laughed when the US mainstream media says Erdogan was "on the ropes," suggesting the election was going to be close. Yes, like the "close" elections in Venezuela.]

The Economist should probably change its name to The Socialist. Of course that would kill sales, but the fact that capitalists "buy" the magazine suggest they may not be reading it. At least not reading it critically.  The current issue features the likely next president of Mexico, suggesting he is "Mexico's answer to Donald Trump." So, two years from now we can see how socialism in Mexico plays out in comparison to unadulterated capitalism in the US.

And for the archives: Time magazine has a "fake" picture on its current issue -- really, really fake -- when caught red-handed, Time admitted it was "fake" but "stood by the story." No shame.

Speaking of which: do the benefits of global warming -- if it exists -- outweigh the risks?

Back to opportunities. Here's one, from oilprice.com:


The June 12 Trump-Kim summit in Singapore has had an overall positive effect on the oil industry, cooling down expectations about the imminence of a major conflict driven by the reckless behavior of leading political figures.

Yet behind numerous geopolitical consequences, the discussion of which has taken up most of the media space, the summit also gave rise to smaller, regional ones. One of such is the resurgence of the Russia – North Korea – South Korea gas pipeline, which it seems is back on the agenda of both Moscow and Seoul. Gazprom’s admission that negotiations have been relaunched upon South Korea’s request is a harbinger of significant things to come.

The Russia-Korea gas pipeline has been on the taps for more than 20 years.

It was first raised in 1995 on the back of East Siberian gas fields being gradually brought onstream – even though the idea eventually evolved into the 38 BCm Power of Siberia project, the possibility of traditionally LNG-reliant Korea having its first onshore gas pipeline was flaunted regularly.

The pipeline was supposed to pass start in the Russian city Vladivostok, then swerve towards North Korea, reaching Seoul in the end. It was never doubted that from the Russian side it would be Gazprom supplying the gas, since it has an export monopoly, from the South Korean side KOGAS and LG were mentioned among potential participants.

Huge. Kim Jong-Un is already getting ready to sent President Trump a "thank you" letter.

According to this article, the Minnesota PUC will vote on Enbridge's Line 3 permit next week.


"There's no evidence to suggest that we would see more trains," said Rep. Frank Hornstein, DFL-Minneapolis, who opposes the Line 3 project.

Will the Minnesota PUC approve Line 3? See poll at the sidebar at the right.

Whatever the Minnesota PUC outcome, it will end up in court.

However, my love for Scotland never wanes, as they say. I've talked about my relationship with Scotland many times.

On my last trip to Portland, OR, I came across a most interesting "antique store," the kind of store about which Owen Wilson's character in Midnight in Paris most likely dreamed. I had to force myself to leave the antique store before I "broke the bank."

One of my purchases was a hardcover, 1983, book edited by Clark Hunter, The Life and Letters of Alexander Wilson. My notes taken while reading this book will be placed at this site.

Int the Wilson biography, I found it just the same. This was almost the opening line:


When searching for unpublished letters of Alexander Wilson, I found in private hands in Paisley his own copy of the 1791 edition of his poems.

Well, it turns out that "Paisley" has its own wiki page. Of course, so does Williston. But I digress.

Having just read much about China's silk industry, and the running water that powered the mills that ran the silk factories, this little nugget was worth the price of the book, which for a used book ws fairly expensive and much more than I generally spend for such books. (A typical English silk mill will be turned into a youth hostel.)

So now I know a bit more about Paisley.


Paisley or paisley pattern is an ornamental design using the buta or boteh, a teardrop-shaped motif with a curved upper end. Of Persian origin, paisley designs became very popular in the West in the 18th and 19th centuries, following imports of post-Mughal Empire versions of the design from India, especially in the form of Kashmir shawls, and were then imitated locally. Although the fig- or almond-like form is of Persian origin, its English name derives from the town of Paisley, in West Scotland, a centre for textiles where paisley designs were produced.

So;
And this is where I will stop as I start to read Chapter One. Further notes will be at the link noted above.

Oh, Clark Hunter, the editor? He wrote the introduction while in Paisley. Scotland.

Flashback -- Poll -- In 2005, The Bakken Was Assessed To Have How Much Recoverable Oil?

Quick: back in 2005, the Bakken was assessed to have how much recoverable oil? Remember, North Dakota is currently producing slightly more than 1.2 million bbls of oil per day.

So, back in 2005, what was the assessment for total recoverable oil from the Bakken?
The answer is below (the link will probably open a pdf on your desktop).


Probably the most compelling evidence as to how changing exploration strategies and technologies are altering our perceptions of the oil and gas potential of the Williston Basin is found by comparing the technically recoverable reserves estimated by the North Dakota Department of Mineral Resources (DMR) in 2005 with those in the 2008 assessment (Bohrer et al.).

In 2005, the DMR estimated that just under 14 million barrels of oil were recoverable from the Bakken with the technology of that time. Three years later (2008), changing technology places the reserves at 2.089 billion barrels of recoverable oil. Even though the Bakken itself has not changed, our ability to extract oil from it has, so that as technology advances our ideas concerning the future possibilities of this resource must as well.

The five biggest (political) international stories are not getting much attention in the mainstream media:
International: after the OPEC/non-OPEC announcement that the parties agreed to increase production very, very modestly, WTI spikes; ended the week trading at above $68; and, here; and here.

Meanwhile, it's official: US overtakes Saudi Arabia in recoverable reserves.

The USGS just released its 2018 assessment of the Eagle Ford: 8.5 billion bbls which now exceeds that of the Bakken based on the USGS 2013 survey of the Bakken.

The tea leaves suggest the Keystone XL is now dead. Canadian dollar drops below 75 US cents; lowest in recent history; may compete with all-time low.

Perhaps the biggest story of the week was an unreported story: North Dakota may have just set an all-time "BOEPD" production record.

Operations
Setting new records
North Dakota will out-produce Venezuela by the end of the summer
Active rigs at 65 at the end of the week
CLR "massively increasing production"; all optimized completions now have 1.1 million bbl EURs

Other formations
Denbury announces a CO2-EOR project in southwestern North Dakota, at the Cedar Creek anticline

Commentary
Bloomberg on the Comebakken

Miscellaneous
US Army Corps of Engineers to stem risk of flooding

Posted by Bruce Oksol at 1:58 AM No comments: