Anyone following this story knows that Texas and North Dakota have it right.

We've talked about this issue before.

"Rule of capture" case in Pennsylvania.


The writer of the link from August 2, 2010, has raised a very interesting issue. This brings a whole new question regarding "how do I know a neighbor's well isn't taking oil from my site?"

The Texas Railroad Commission recently upheld / clarified a ruling that says a neighbor cannot sue for oil production / loss from a horizontal that comes right up to the section line.

The commission said that if the neighbor is worried about a neighbor's well taking oil from his/her site, he/she better drill his/her own well. One can argue that the effectiveness of fracking extends only about 500 feet (radius) from the bore hole, and that may be true of the enhanced recovery, but that question will probably be raised.

As noted earlier, the Texas Railroad Commission is similar to the NDIC in North Dakota, and most states follow the rules set by Texas regarding oil / mineral rights.

Meanwhile, Trump administration redefines jurisdiction of Clean Water Act.  This is another great case in which the former administration clearly overstepped any reasonable boundaries of common sense:


The new rule will apply federal regulation to territorial seas and traditional navigable waters, continuous (perennial) and intermittent tributaries of those waters, adjacent wetlands, lakes or water impoundments connected by surface flows to jurisdictional waters, and ditches that have been dug in wetlands or waterways.

The new rule will not apply federal controls to isolated lakes, ponds and wetlands lacking surface water connections to navigable waters, nor will they be applied to ditches outside wetlands or waterways. Federal regulations also will not apply to “ephemeral” streams, which flow only in the immediate aftermath of rain. Those will be left to states and local governments.

Under the former administration, based on my reading of the above, "the Obama interpretation" included trickles of water in my backyard after a heavy rain.
Posted by Bruce Oksol at 4:45 PM No comments:

Wow, I'm in a great mood. Watching a sports documentary on all the snow at Jackson Hole for skiing this year. The skiers say they have never seen so much great powder.

Market: speaking of powder, for those who have keeping their powder dry for a market pullback should have had a great day today. I'm always fully invested but I did find some cash to buy some shares at a very nice price. Good luck to all.

Dividends: there are pros and cons with all investments. But, I suppose, one can argue, with regard to investments, there are worse things than dividends. But for those who enjoy dividends, two sites that are particularly helpful:
USPS prices increasing Sunday.

I guess a no runs, no hits, no errors kind of report.
Posted by Bruce Oksol at 4:19 PM No comments:

So, How Did This Happen? Closer Look At A New Case For Nine Wells In One Drilling Unit In The February, 2020, Hearing Dockets: New Operator In The Bakken -- January 24, 2020

Our company was formed in 2018, but has been focused on the Bakken since the beginning of the boom in 2011. Our firsthand knowledge of the rock, the people, and the infrastructure that make up this play combined with our passion for the Bakken and over 25 years of engineering experience have produced a team strongly suited and ready to develop a Bakken asset.

The team:
Maroon Bells? see this site and this wiki site.

Maroon Bells not yet listed as an operator over at the "well search" site at the NDIC.

The case:
The graphics: 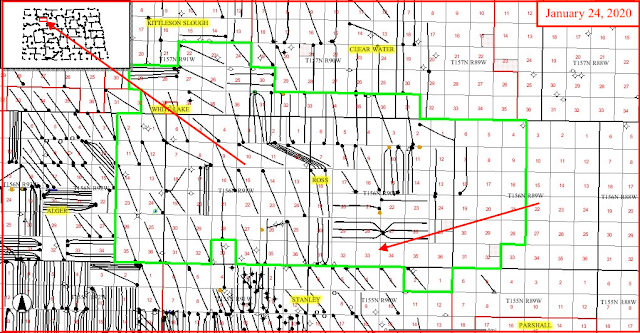 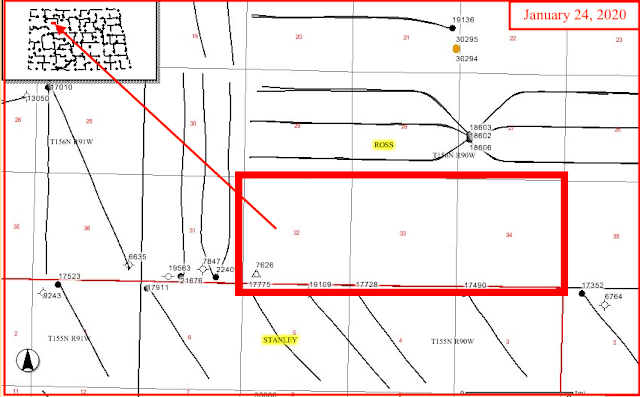 Closer Look At A Hess Case For 12 Wells In One Drilling Unit In The February, 2020, Hearing Dockets

The case:
The wells: 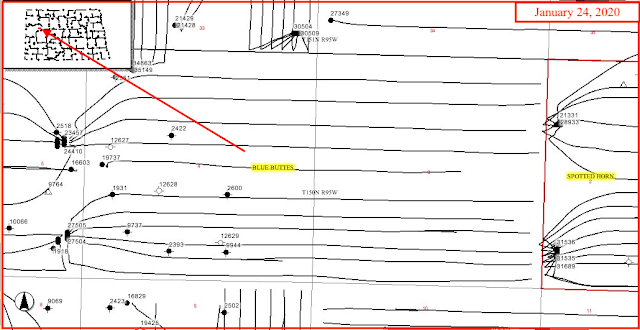 Closer Look At A CLR Case For 24 Wells In One Drilling Unit In The February, 2020, Hearing Dockets

From the February, 2020, NDIC hearing dockets:
The existing wells/permits in these sections:


Cedar Coulee is tracked here. At that link it is noteworthy that the area under discussion above is in the immediate area of that shown in the graphic at the Cedar Coulee link. For someone who doesn't know much about the Bakken, LOL, it's amazing how much gets posted on the blog. 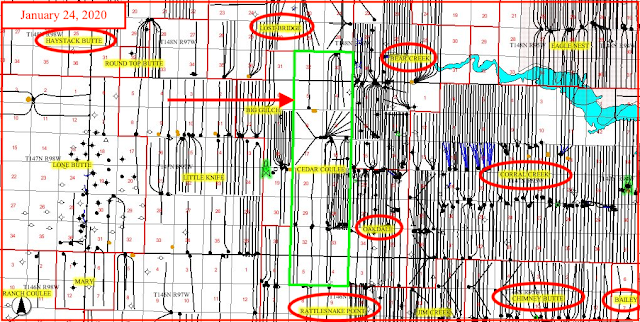 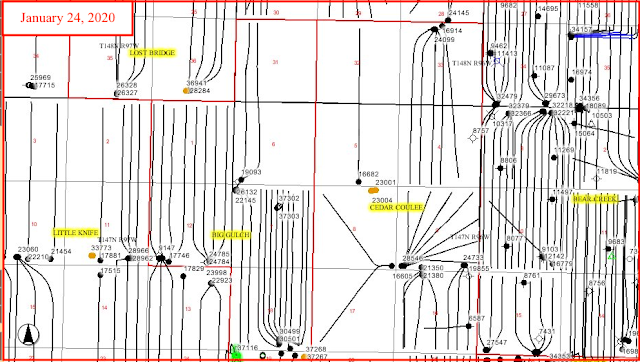 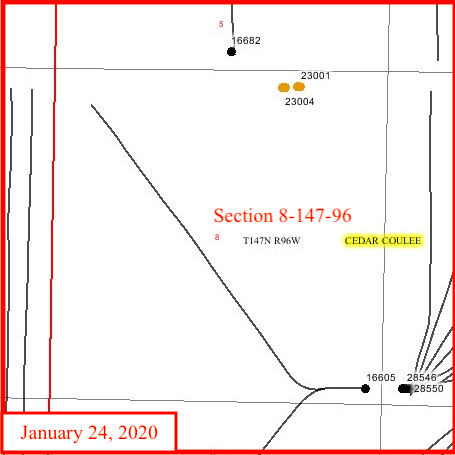 Holy mackerel: Brexit -- final documents signed today. One week from today, Brexit is official. US and EU will be stumbling all over each other to be the first to make deals. Coming off Davos, quite amazing. I assume those were the real discussions at Davos this year -- the deals that need to be made.

Oil: It's quite amazing to see how fast oil is falling. WTI is down another 2% this morning, off another $1.05; now trading below $55.

XOM: to sell its UK, Germany oil and gas operations.

Politics: apparently today, the third day of three days of opening statements, the US House impeachment managers will argue President Trump sought to stop impeachment efforts in the US House. Say what?

The Neogene period,  from 20 mya to 3 mya (numbers rounded). From wiki:


During this period, mammals and birds continued to evolve into modern forms, while other groups of life remained relatively unchanged.

Early hominids, the ancestors of humans, appeared in Africa near the end of the period.

Some continental movement took place, the most significant event being the connection of North and South America at the Isthmus of Panama, late in the Pliocene.

This cut off the warm ocean currents from the Pacific to the Atlantic Ocean, leaving only the Gulf Stream to transfer heat to the Arctic Ocean. The global climate cooled considerably over the course of the Neogene, culminating in a series of continental glaciations in the Quaternary Period that follows. 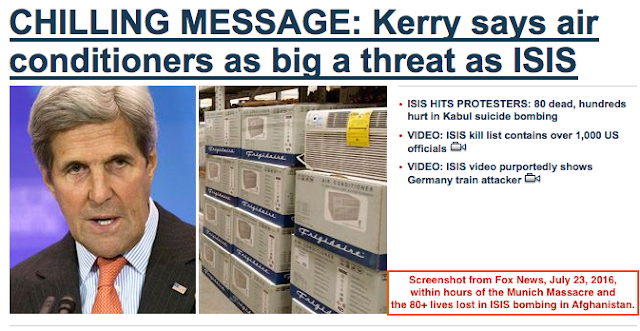 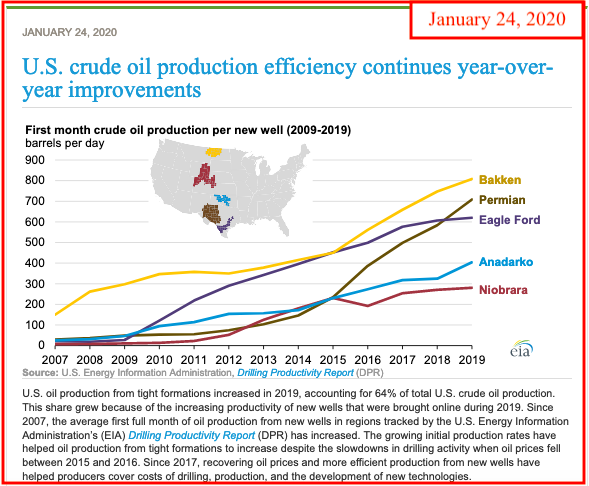 This share grew because of the increasing productivity of new wells that were brought online during 2019. Since 2007, the average first full month of oil production from new wells in regions tracked by the U.S. Energy Information Administration’s (EIA) Drilling Productivity Report (DPR) has increased. The growing initial production rates have helped oil production from tight formations to increase despite the slowdowns in drilling activity when oil prices fell between 2015 and 2016. Since 2017, recovering oil prices and more efficient production from new wells have helped producers cover costs of drilling, production, and the development of new technologies.

The average new well in each DPR region produced more oil in 2019 than wells drilled in previous years in those same regions. This trend has persisted for more than 10 consecutive years. More effective drilling techniques, including the increasing prevalence of hydraulic fracturing and horizontal drilling, have helped to increase these initial production rates. In particular, well productivity was improved because of the injection of more proppant during the hydraulic fracturing process and the ability to drill longer horizontal components (also known as laterals) and perforate more stages.


Transporting crude oil from the lease to refineries and export docks is like a long-distance relay race. The crude oil gathered from several wells is handed off to shuttle or takeaway pipelines, which then pass it on to regional crude hubs like Cushing, OK — from the hubs, crude is transferred to still other pipes. To get the relay going, the developers of crude gathering systems work closely with their takeaway pipeline counterparts to figure out the most efficient way to effect the first baton pass. Today, we continue our series on crude-related infrastructure in the Rockies’ Denver-Julesburg (D-J) Basin with a look at Outrigger Energy’s existing and planned gathering systems, and their connections to Tallgrass Energy’s still-expanding Pony Express takeaway pipeline.