How a strange mind works.

I'm sitting outside out in the open on a foldaway chair, watching a 5-month-old squirming on a small quilt on the grass. And then my mind wanders:

Or, Saudi Aramco is Saudi Arabia.

Then, I wondered, I wondered if Saudi Arabia had posted the latest foreign exchange reserves which come out at the end of the month.

And, not good news for Saudi Arabia. May, 2020, was supposed to be the worst month, but here we go: June, 2020, is actually worse. And I think Saudi did some fancy financial "smoke and mirrors" to prop up the May, 2020, numbers. This has to be very, very scary. For Saudi Arabia. I know the five-month-old down on the lawn me is not worried. LOL. 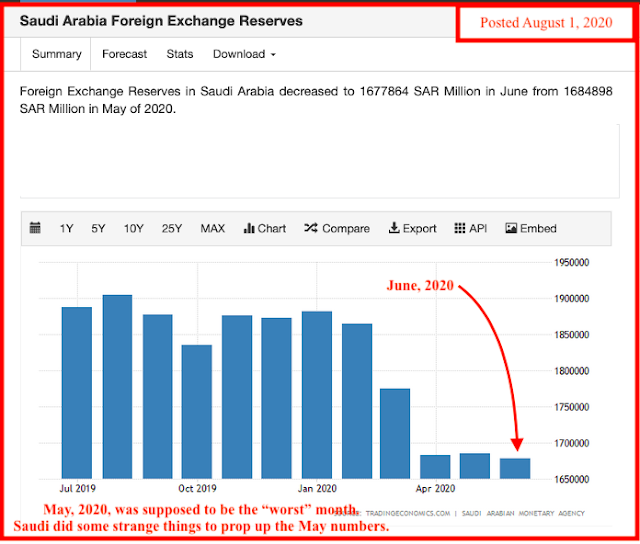 I think this is a big deal. We'll see if anyone else talks about it.

From gfmag, now I understand the "smoke and mirrors" to prop up foreign exchange reserves:

Countries and corporates based in Gulf Cooperation Council (GCC) states are taking advantage of low interest rates and eager investors to issue large amounts of bonds.

Altogether, borrowers from the region raised a record $101 billion through bond placements last year, and this year’s total is likely to set a new record.

The surge comes at a time when syndicated loans are declining, thanks to lower oil revenues and economic weakness caused by effects of the Covid-19 pandemic and governments’ subsequent postponement or cancellation of major projects.

“Even in the current turbulent environment, there is ample market liquidity and interest by global investors for GCC corporate issuers that have business models with strong competitive advantages,” says Rehan Akbar, senior credit officer at Moody’s Europe, Middle East and Africa Corporate Finance Group in Dubai.

“As an example, Equate Petrochemical [based in Kuwait] was able to successfully issue $1.6 billion of bonds in mid-May, even though the petrochemical industry is facing a challenging time.”

Despite the oil-price drop, Saudi Aramco sold $12 billion worth of bonds in April 2019 and attracted $100 billion in offers, demonstrating that investor demand remains strong in light of an ongoing search for relatively safe but higher-yielding securities. Mubadala, Abu Dhabi’s sovereign wealth fund, sold $4 billion in a three-part bond offering in May 2020, attracting orders worth nearly six times that amount. The offering included $2 billion of dual-listed Formosa bonds, sold in Taiwan and listed on the Taipei Exchange, which provides financial products and trading services to the international market. 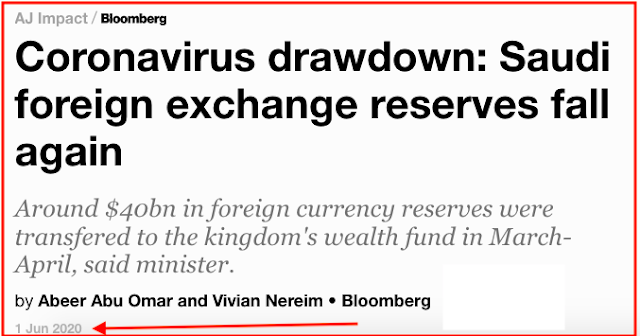 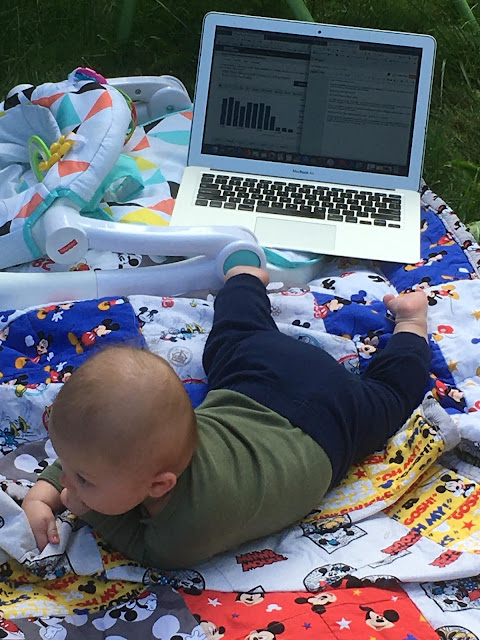 Right in the heart of the Bakken: near the great fields -- near Charlson, Hawkeye, and Antelope.


Case No. 28544: Application of Burlington Resources Oil & Gas Co. LP for an order amending the applicable order for the Union Center-Bakken Pool to authorize up to fifteen horizontal wells to be drilled on a 1280-acre spacing unit described as Sections 2 and 11, T.152N., R.96W., McKenzie County, ND, and granting such other and further relief as may be appropriate. 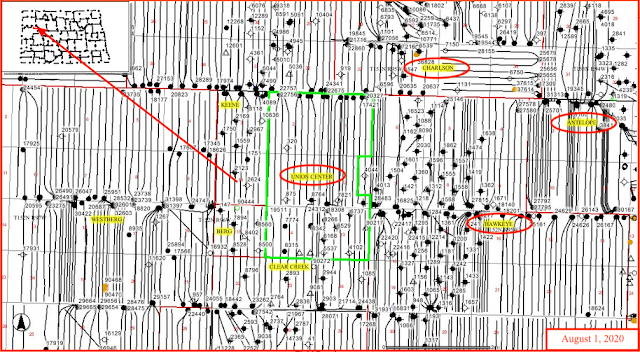 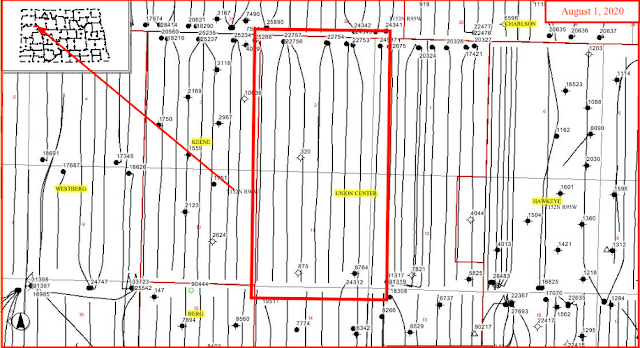 Producing wells in that drilling unit:

From oilprice. Apple becomes the most valuable company in the world. Saudi Aramco drops to second. From the linked article:


Aramco’s Q2 report will not be available until August 9, and it will be a reflection of the overall state of the oil market in Q2—in other words, it isn’t going to be pretty.

Aramco’s Q1 profit fell 25%, and that was well before the coronavirus infiltrated the world and created widespread lockdowns. In fact, oil prices were only really low during the last few weeks of Q1.

But in March, Aramco lowered its April OSP. In April, it lowered May’s OSP; each cut another blow to the world’s largest oil producer. It wasn’t until May when Aramco boosted its next-month OSP—the last month of the quarter.

This will likely result in Aramco’s Q2 revenue coming in south of $40 billion, compared to $75 billion this time last year.

Compare that to Apple’s nearly $60 billion in revenue for the quarter, and you have a new king of the hill.

The cause for your concern applies to home office deductions for people who are employees.

I can't think of anyone who ever convinced me to take that deduction on a Schedule A - which is where it would have gone.

However, I took (and still take) home office deductions for people on their Schedule E - (rental real estate, royalties etc.) or Schedule C for self-employed.

But, the chances of someone being an employee and having a home office were pretty slim to start with. To qualify, that space had to be used exclusively for business. No hide-a- bed/guest room set up; nothing other than office furniture, business literature, file cabinets solely for business records, storage for business products/inventory to be sold. Plus - that was the sort of thing that had to be over 2% of AGI to get listed anyway.

As a practical matter, once the standard deduction was doubled - far fewer folks itemize. (That's where it comes in so handy to have an E or C to expense stuff.)  [I bet Trump knew that.]

What did Congress and the IRS know and when did they know it?

Earlier I suggested that millions of Americans now working from home should consider the home office deduction. Well, I was wrong. Really wrong.

The US Congress, working with the IRS, discontinued this beginning in 2018, but for only eight years. Now, if I was a conspiracy theorist, I would suggest that we might not see the end of Covid-19 until after 2025.

All these years we have the "home office deduction" and then, all of a sudden it goes away, but just for eight years or so.
Posted by Bruce Oksol at 2:13 PM No comments:

From a reader. Thank you very much.

The Trump Administration and the CDC have produced an interesting data site that is updated (each work day?) showing the progress measurements of COVID-19 data as they relate to state-by-state strategies for opening up (e.g., schools, businesses, restaurants, sporting events, etc.). The website is at: https://www.covidexitstrategy.org.

This will be linked at the sidebar at the right.
Posted by Bruce Oksol at 1:55 PM No comments:

Buffett -- AAPL -- airlines update. Back on March 31, 2020, or thereabouts it was announced that Warren Buffett sold all his airline holdings in his Berkshire Hathaway portfolio. One Yahoo!Finance analyst wrote an article suggesting Buffett had panicked, selling his airline stock at a loss. In fact, that analyst apparently doesn't understand basic investing.

Updating the table below, which I have been doing every so often shows that had Warren Buffett held on to his airlines back on March 31, 2020, instead of selling, those shares would now be worth less than what he sold them for.

The airlines (DAL, UAL, AAL, and SWA):
Had he taken that $2.7 billion and bought AAPL:
The increase in value is incredible. But more importantly, as of August 1, 2020, would you rather have holdings in AAPL or in the four airlines? 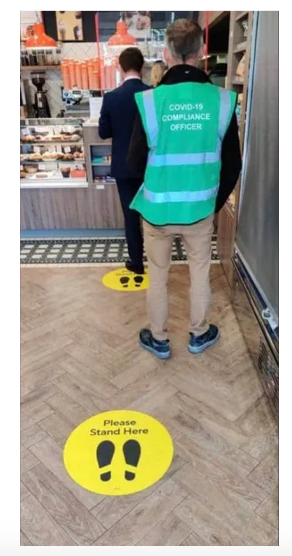 
Usable oil sands have been found in North Dakota and can cut down some of the costs that oil companies are facing at a time when money is getting tight.

North Dakota geologists have found usable sand in the dunes of Mercer and McHenry counties, but this isn’t for laying on at the beach.

Oil producers need this specialized sand for the fracking process. It needs to have a high percentage of quartz, and this material has up to 80% of the mineral.

“It’s encouraging that the sands that we’ve been investigating are favorable for use as proppant sand,” said Fred Anderson, NDGS.

Eye test: see if you can see the blip in Chinese crude oil imports -- 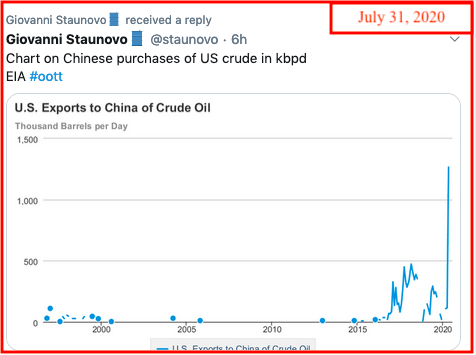 The old "bear in the woods" joke: you only have to run faster than your fastest competitor: 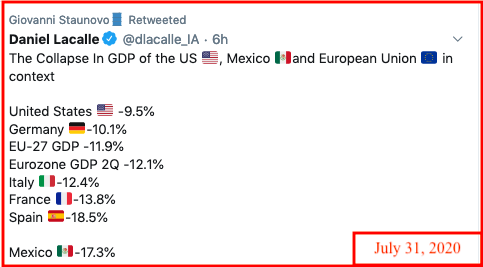