Note: this is a long post. There are probably errors -- typographical and factual, but I am taking my granddaughter swimming and corrections will have to wait.

Alexander bypass finished; just in time for winter. Quite an achievement. Story here.  With this bypass completed, this almost completes the entire four- / five- / six-lane highway from Odessa to Midland Williston to Watford City.

I believe the Alexander bypass will follow the route in red to some extent. I'm not exactly sure where it enters the highway on the south side. 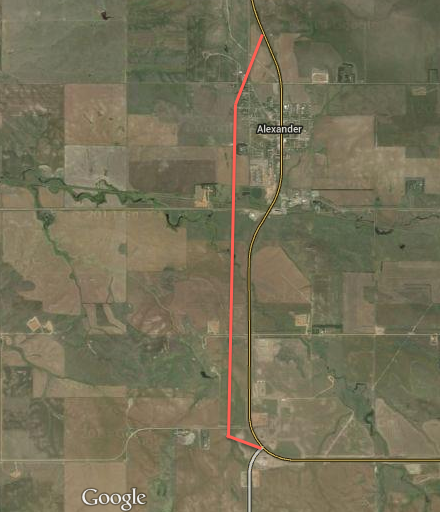 Update, March 5, 2015, this is the satellite view of the completed bypass: 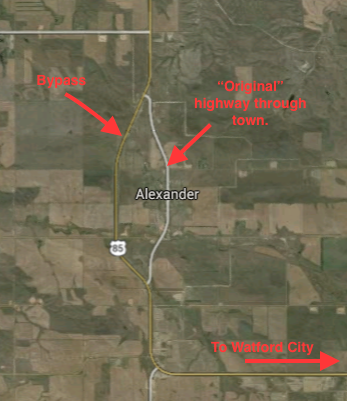 See first comment: readers can compare my "guess" with the official map at this link: http://www.nddotwilliston.com/project-maps/.

Nineteen (19) new permits --
Wells coming off confidential list Friday:
*The scout ticket says the IP for #26381 was 7,231 bbls of oil. This is obviously incorrect. The file report has not yet been scanned in at the NDIC site. My hunch is that the correct number is 723 bbls. 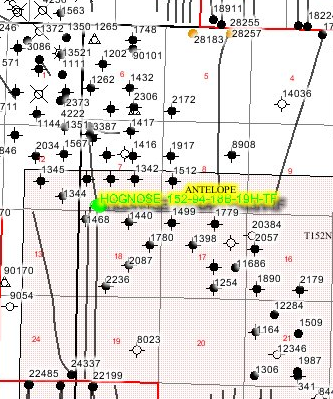 This takes us back to a June 16, 2012, posting in which we discussed Slawson targeting the Upper Bakken Shale.

A reader asked "whatever resulted from the Slawson wells that targeted the upper Bakken shale?"

In the linked post above to the June 16, 2012, entry, the Slawson wells were not specifically identified.

Going to "well search" at NDIC site, there are only two wells that fit that description:
The file reports are incredibly interesting. I had not looked at them until recently. They clearly state the objective was the (upper) Bakken Shale. Both wells are moderately successful and both wells are still active.Scout ticket for #16920:


Some things to note:

More is better if one is worried about preparation for the winter.

The number today: 105. At the link, scroll down to see the graph.

See "NG_Fill_Rate" at bottom of blog for past posts on this subject.

This link probably explains the most.

Obamacare has only gotten passing attention this election season, but it is likely to return as a hot topic early next year. That is because during the 2015 tax filing season, millions of low- to moderate-income taxpayers will likely first learn that they exceeded the income eligibility levels for the Obamacare subsidy they received in 2014 and will need to repay the government. This repayment could result in a sufficiently abrupt and targeted reduction in consumer spending that could delay the Federal Reserve from starting to raise short-term interest rates, which the consensus view expects to occur in March, coincidentally contemporaneous with when this looming "consumer cliff" hits.

Those advising investors may find this interesting. We're not going to see any significant increase in the "Fed rate" while Mr Obama is still in office. It will kill any hope of recovery.

I think there are two other story lines that are much more interesting. The folks that will be most affected are those who spend almost all their cash/money as soon as they get it; they live month-to-month; they are not savers. A lot of money is not going to be spent at Wal-Mart or the local Dollar Store. The second story is that a lot of folks who have never gotten a letter from the IRS before will be shocked to get a letter along with their refund that tells them they need to reconcile what they told ObamaCare when they applied and the income they are reporting to the IRS.

This new record extent follows consecutive record winter maximum extents in 2012 and 2013. The reasons for this recent rapid growth are not clear. Sea ice in Antarctica has remained at satellite-era record high daily levels for most of 2014.

Oceans not a heat sink: NASA scientists also baffled. Oceans have not warmed measurably since 2005. "Measurably" is the key word. I assume the NASA computer models show that the oceans have, in fact, warmed. LOL.

Contributor at Seeking Alpha:
Kodiak's prospective merger with Whiting will be beneficial for both companies as the new entity will have the largest liquid acreage in Bakken - the advantage of the scale will allow both these companies to add substantial value to the shareholders through increased production and decreased cost. In our previous article, we discussed the details about the Kodiak-Whiting merger and the strong future growth prospects from the impressive asset base of the entity. However, the focus of this article is to highlight the position of the merged entity and the impact of the global oil prices on the company.

Seeking Alpha articles frequently "disappear" after a few weeks, requiring a subscription to access.
Posted by Bruce Oksol at 11:01 AM No comments:

Tribal Members On Fort Berthold Will Start Drilling Their Own Wells; Brigham Is Back -- October 9, 2014

Under the auspices of the tribal-owned Missouri River Resources, at least four wells will be drilled near Mandaree.  Missouri River Resources President David Williams said 30 wells are planned, and the first four are set to begin drilling in February 2015.  “Right now we’re building the team to do the project,” Williams said.  Brigham Resources, LLC, a privately held oil and gas company headquartered in Austin, Texas has been contracted to oversee the drilling operation.  Baker Hughes will provide well servicing.

Williams said the MHA Nation is providing the expertise including a petroleum geologist, drilling consultant and attorneys.  Williams said the initial investment for the tribal-owned wells is coming partially from a loan from the oil revenue the MHA nation has already received.  It’s estimated the wells will cost about $10-million each and the tribal government has loaded $8-million per well.

I don't yet see Missouri River Resources listed as an operator in North Dakota at the NDIC site.

My hunch is that the Missouri River Resources will use a strategy similar to that used by the sovereign Arab countries in the Mideast.

Management team:
Don led me on this wild goose chase. Happy to say the wild goose was caught in this case.
Posted by Bruce Oksol at 10:44 AM 2 comments:

The monthly production report for August, 2014, for North Dakota should be out any day now. The Director's Cut generally follows shortly after that.

Mark Perry / Carpe Diem frequently posts the data before I do.

By the way, Carpe Diem will have a new URL in the next day or two: http://new.aei.org/publication/blog/carpe-diem/. Currently not "up."

Warmists may want to look at the updated "hockey stick" graph. And this one is real; not a computer-generated model.
Posted by Bruce Oksol at 10:20 AM No comments:

From the discussion board, this link to Tulsa World: the Bakken will remain the third leg of WPX's three-legged stool for the next five years.


WPX Energy Inc. is staking its future on a trio of core oil and gas plays in North Dakota, New Mexico and Colorado, the Tulsa-based oil and gas producer announced Wednesday.

The new five-year strategy will simplify WPX’s geographic focus and expand returns, margins and cash flows over the next five years, according to the plan. The company’s core resource plays have an estimated 16,000 remaining drillable locations, 480,000 net acres and more than 14 trillion cubic feet equivalent of proved, probable and possible oil and gas reserves as of December 2013.

Those core plays are the Williston Basin in North Dakota, the San Juan Basin in New Mexico and the Piceance Basin in Colorado. WPX holds more than 220,000 net acres in leases and 4,600 wells in the Piceance.

I track the Piceance here, with a great graphic.
Posted by Bruce Oksol at 10:14 AM No comments:

Germany headed back into recession? Russian ruble near collapse? US market down another 200 points today. How are those sanctions working out? Haven't heard much from the Ukraine lately.

Following closely the polls that show people being "hurt" by ObamaCare, we now get word that more than a dozen states will cancel health care policies not in compliance with ObamaCare -- the cancellations will arrive about the time folks are getting ready to vote.  Like your insurance plan? Don't become too attached.


The political drama tying up the construction of the Keystone XL pipeline isn't slowing down Canada. According to Bloomberg News, Canada is constructing a $10.7 billion pipeline, which would run through six provinces and four time zones, straight out to the Atlantic Ocean.

It’s the ultimate workaround, albeit a very expensive one. The pipeline is being called Energy East, and it would use existing or underused natural gas pipelines to make its way across Canada. It could be up and running by 2018.

Energy company TransCanada first proposed the Keystone XL pipeline six years ago to bring oil from Alberta down to the Gulf Coast. The Keystone pipeline was supposed to create jobs and lessen U.S. dependence on foreign oil. Instead, it has created political theatre, polarizing policymakers over environmental and safety issues.

The key quote from the article: "You snooze, you lose."

The number of Americans filing new claims for unemployment benefits fell last week to nearly its lowest level since before the 2007-09 recession, a sign of growing steam in the U.S. labor market.

Buried deep in the article: previous week's numbers were revised upwards ... by 1,000. So, it's a wash today.

A reader sent this in early this morning:

Langdon, ND, had the coldest temperature in the lower 48 yesterday with a low of 19. Rolla, ND, is in the lead for the coldest spot in the nation this morning, if that is a contest you want to win........

With air power alone, we may have to destroy Baghdad to save it. Link here. The big question: if Baghdad falls, who is "behind" ISIL? Did Iran achieve its goal?

This morning ISIL executed 1,700 students (children, kindergarten, elementary) near an Iraqi air base, filmed it all, and systematically killed every one of them. Some Harvard students say the US is a bigger threat to world peace than ISIL.

For a guy who for six years (and counting) continues to decide whether to approve a single pipeline, world events are moving so quickly, he must think the world is spinning out of control.

High-end, Dickinson-based retailer, Starboard, will host a ceremonial ground-breaking on Monday, October 13th, at 1 p.m. in front of their store site at the Sand Creek Town Centre in Williston. The store expects to be open in time for the 2014 Holiday shopping season.

City of Williston government and business leaders are attending the Ports-to-Plains Alliance Conference this week in Del Rio, Texas and Acuña, Coahuila. The delegation is seeking information about the manufacturing opportunities along the US Highway 85 / Theodore Roosevelt Expressway in North Dakota.

There could be another 10,844 wells in McKenzie County in the next 13 years. McKenzie County is projected to have 13,500 wells by 2027. To put that growth into perspective, McKenzie County had 2,656 in production in July of this year, while there are now 11,287 producing wells in all of North Dakota.

The Bismarck Tribune reports high-end crew camps for roughnecks.
Posted by Bruce Oksol at 8:57 AM No comments: