Australia Negotiating WIth US On Emergnecy Oil Supplies; A Note From A Reader On Australia - US LNG Exports -- August 2019

Memo to "First Squawk": enough with the caps.

With regard to the twitter screen shot above. I happened upon that tweet about 9:00 a.m. this morning. It would have caught my attention regardless but a note from a reader last night "primed" me to see that tweet.


That LNG daily export chart will show another 50% to 75% bump by year's end.

Six years out, it will easily double again ... gar own teed.

Contract with Cheniere has already been signed.

I find that absolutely incredible.

"Americans" have no idea how big this story -- the shale revolution story -- is and will be.

By the way, know what I found most rewarding about that short note? This one word: "Cheniere."

I noted the Cheniere / Chile connecting dot in the linked post above.
Posted by Bruce Oksol at 1:02 PM No comments:

Newbies: as you look scroll through this post, recall the hand wringing about parent-daughter interference in the Permian. The data below is not atypical for the Bakken, but some fields are much better than others with regard to this phenomenon. Hard to sort out how much has to do with location / oil field, and how much has to do with the operator / completion strategies. Everything I've seen suggests the Bakken operators have a good handle on this issue. Could be wrong.

The well:
One typical example:

Another example, this well over nine years old, drilled in the early days of the boom, huge jump in production, over 9,000 bbls in 14 days when it came back on line:

One of the two daughter wells:

Record IPs: when looking at the IPs of the wells on this pad, be sure to compare with "record IPs" at this post.

The well:
The jump in production may not last long but for mineral owners receiving no "mailbox money" from this well for ten months or so, this is nice to see.

Wells on neighboring pad:
Example (won't be updated below): 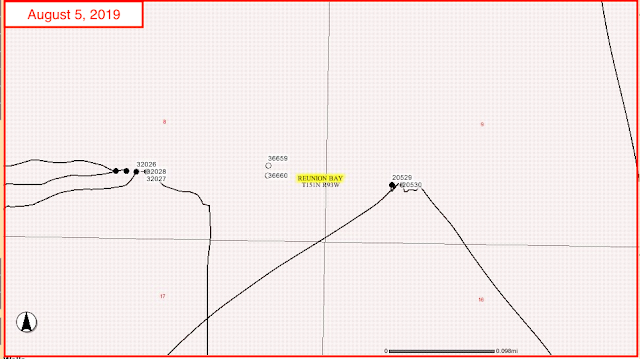 The jump in production may not last long but for mineral owners receiving no "mailbox money" from this well for ten months or so, this is nice to see. This well is seven years old; was drilled relatively early in the boom.

Other wells on the pad:
The graphics: 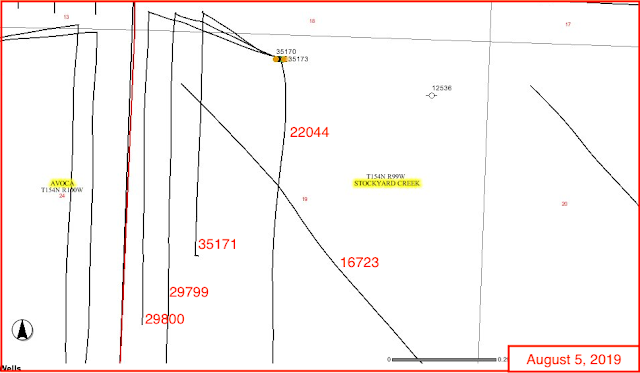 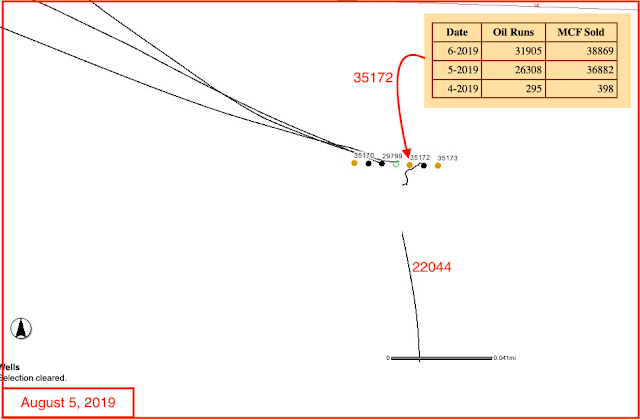 The answer will be posted Monday, August 4, 2019, sometime during the day after I get caught up with the news that came out over the weekend.

Originally posted here, so some answers/replies will be at that post.

On another note, 99.9999999%+ Americans can be thankful they had an uneventful weekend. Huge condolences to the families in Dayton, OH, and El Paso, TX.

Answer: conventional wells. And it's not even a close call. [Later, see this post also.]

Your question regarding produced water is significant for several reasons. Conventional, vertical production may have 90 to 99 barrels of water for every single barrel of oil produced as a routine matter for older wells.

This is the single biggest expense in low producers and is the main determinant of when to permanently plug a well.

Unconventional in the Bakken is frequently in the 1 bbl water /1 bbl oil range which is pretty remarkable and a huge influence on the long term positive economic potential.

Water handling (for frac'ing in LTO, disposal in conventional and unconventional) is a big component in oil development operations.

This is what caught my attention and why I asked the question.

This is a screenshot of the abstract from an article published in 2017 with regard to the Permian. 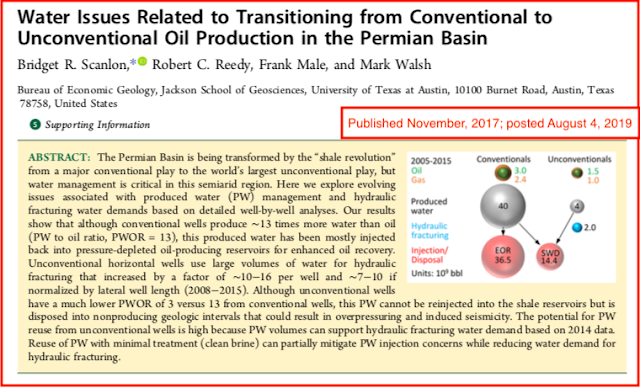 
On whether flowback is same as produced water?

It is not, but I can not offer any legally/technically precise definition with which to precisely distinguish one from the other.

In the early Bakken years (probably Eagle Ford and Niobrara also), huge amounts of the frac fluid would be somewhat rapidly - within a few days' time - removed from the newly frac'd well. This was partially motivated in not wanting the formation to absorb the water, swell and inhibit production.

In the last 2 to 3 years, it is obvious that operators are maintaining VERY high quantities of frac water underground for SEVERAL months and the now-surfacing water is labelled as flowback. (The earlier years' rapid flowback was - to my knowledge - never officially recorded). This is why when the recent wells' production profiles show 200,000/250,000 barrels produced water first 5 months, purposeful underground retention is indicated.

For me, I apologize to readers. To some extent this was a "trick question." Everyone writing about fracking, including me, writes about the huge amount of water being used to frack the wells. So I was quite surprised to see how much water is actually used in conventional wells.

For me this was incredibly important: with the recent discussion of porosity and permeability, there were sidebar issues regarding water. If oil producers seem hassled by natural gas / flaring, I would imagine that issue pales in comparison to the problem they have with water.

Along with everything else about water in that linked PWOR study, there was a footnote in one of the replies to the porosity / permeability issue with regard to how Saudi Arabia almost "lost"one of their best fields due to water channeling.

So, I apologize for the trick question, but, wow, I sure learned a lot.
Posted by Bruce Oksol at 7:27 AM No comments: