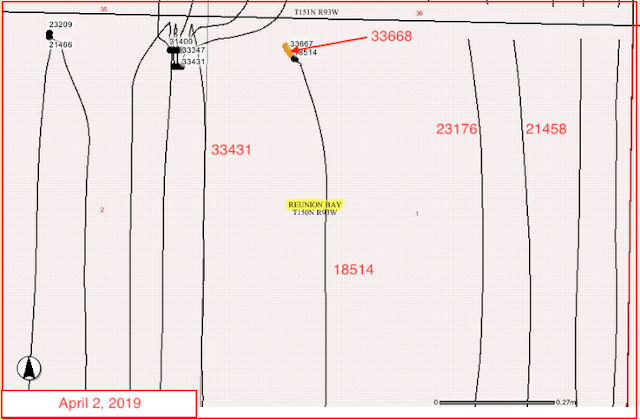 "The Day The Dinosaurs Died: A young paleontologist may have discovered a record of the most significant event in the history of life on Earth." From The New Yorker. I posted this story from another source earlier this week (month?). Archived.

The "three-metre problem": in a century and a half of assiduous searching, almost no dinosaur remains have been found in the layers three metret nine feet, below the KT boundary, a depth representing many thousands of years. Consequently, numerous paleontologists have argued that the dinosaurs were on the way to extinction long before the asteroid struck, owing perhaps to the volcanic eruptions and climate change. Other scientists have countered that the three-metre problem merely reflects how hard it is to find fossils. Sooner or later, they've contended, a scientist will discover dinosaurs much closer to the moment of destruction.

The scientist: Robert DePalma, writing from a truck stop in Bowman, North Dakota.

DePalma: a loner, from the University of Kansas. Claimed to have discovered the answer.

Hell Creek: at the time of the impact, Hell Creek -- steamy, subtropical lowlands and floodplains along the shores of an inland sea, the

Discussion of the KT layer.

The story of Walter Alvarez, a young geologist, and his father Luis Alvarez, a nuclear physicist, and the discovery of the rare metal iridium in the KT layer, in the 1970s.

1991, David Kring, the smoking gun paper: the Yucatán peninsula -- exactly the right age, the right size, and the right geochemistry. The crater and the asteroid were named Chicxulub, after a small Mayan town near the epicenter.

2010: most considered the issued "dead" or solved; the end of the story. But a competing hypothesis persisted: the colossal "Deccan" volcanic eruptions, in what would become India, spewed enough sulfur and carbon dioxide into the atmosphere to cause a climatic shift. The three-metre gap could be explained if the "Deccan" hypothesis was correct.

2004: DePalma, 22-years-old, began excavating a small site at the Hell Creek Formation. The site had once been a freshwater pond.

Found microtektites. [Wow, Los Alamos all over again, for me.]

As he continued to dig, it dawned on DePalma that "he had made the most important paleontological discovery of the new century."

The short bio of DePalma.

Jack Horner comes across as a bit of an idiot and a jerk in one part of the story.

DePalma does not have a Ph.D.

Now, back to Bowman, ND.

An hour of driving back country. We do not know if he was in SD, ND, or MT.

The first fossil, a paddlefish. And then found a marine (salt-water) fish alongside the freshwater fish.

The story of finding the tektites. The interpretation: the whole site was the KT boundary. A tsunami wave hurled the salt-water fish into the freshwater pond.

DePalma's site: the whole KT boundary: the day of the impact; the day the dinosaurs died.
Posted by Bruce Oksol at 9:26 AM