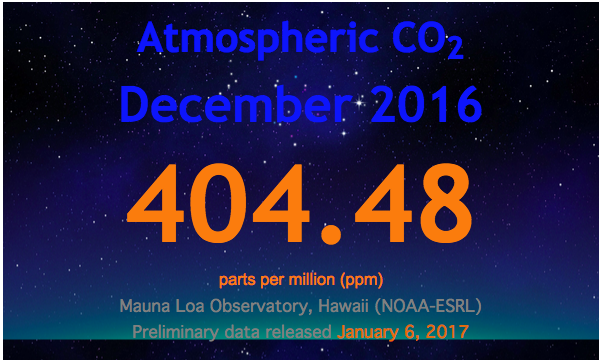 Compare these two graphs, taking particular note of the size of the bars for May, 2016, and comparing most recent data.

Now, compare to the "new" graph with updated data.

There are several things to note:
I don't know what others might say, but to me this is quite staggering.

This is occurring at same time, Saudi's foreign policy (war in Yemen) costs are increasing, as wells as internal security (terrorism; subsidies to keep population content) are increasing.

By October - November, 2016, oil prices had started to recover, and yet Saudi's cash reserves were falling faster than ever.

At $50-oil, and a national budget based on $80-oil (wink-wink), I can't imagine this graph will turn around any time soon. 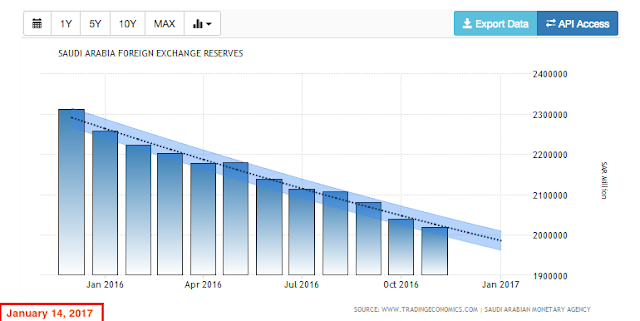 Over at "The Next Big Thing," I just posted a note about drones a few days ago:

Today a reader sent me this timely link: drone schools look to woo younger pilots for commercial jobs, from The Bismarck Tribune:


Leaders in the unmanned aircraft industry are trying to persuade young people who think drones are cool to consider flying them for a living.

Commercial pilots must obtain a Federal Aviation Administration drone license, and some companies that employ such pilots have started selling classes that help students prepare for the FAA test or just figure out whether they would be interested in such a career.

"I think a lot of people my age are interested in drones because it's cool technology that is really just starting to be available for everyone," said 17-year-old North Dakota high school student Ava Niemeier, who plans to attend new training being offered by a commercial drone company in her state. "There are a lot of kids at my school with smaller drones that they fly for fun."

Businesses use drones to take photos and video, for security and to conduct inspections or surveys, among other things. With the number of commercial drone operations outpacing the pool of certified drone pilots, experts say more training is needed to help young flyers operate the planes legally and safely.

This was not a "staged" photograph. I had been in the living room when I went in to the bedroom to see if Sophia was taking a nap. She was not: 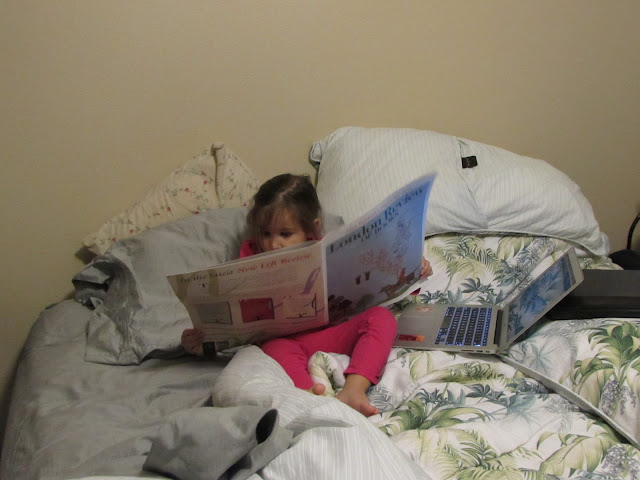 It should be noted that The London Review of Books, which she is reading, is more challenging to read than The New York Book Review which I generally prefer.
Posted by Bruce Oksol at 11:24 AM No comments:

Does anyone remember that story on the big natural gas discovery off the coast of Egypt posted some months ago? Several other posts: if interested, search "Israel Noble natural gas."

Here's the link to an update to that story sent to me by a reader in The New York Times: energy boom could make enemies of Israel, new friends. Don't hold your breath.


Once a barren energy island in a part of the planet otherwise awash in resources, Israel is, after years of delay, finally pushing ahead with an ambitious strategy to tap offshore reserves that could transform its economy and, it hopes, its place in a historically hostile region.

If all goes according to plan, Israel will not only become largely energy-independent, it will also supply neighbors that will have new reason to be friends.

Israel has been looking for energy since the 1950s, but the breakthrough came in 2010 with the discovery of fields called Leviathan and Tamar, said to hold 25 trillion to 30 trillion cubic feet of natural gas. A partnership led by Noble Energy, a Houston-based company, and the Delek Group, an Israeli firm, has developed wells in Tamar; the first supplies reached domestic markets in 2013.

Israeli gas now produces more than half of the country’s electricity and has bolstered its economy. Leo Leiderman, the chief economic adviser for Bank Hapoalim, estimated that along with the broader decline in energy prices, the influx of natural gas translated to an additional 2 percent of gross domestic product. And that is with only a part of the reserves currently being tapped.

Leviathan, which is more than twice the size of Tamar, has yet to be developed. Exploration stalled because of disputes over how the government should regulate the potential boom. Critics like Shelly Yachimovich, a Labor leader in Parliament, complained that corporate “pigs” would profit off resources that belonged to the Israeli people. The Noble partnership resisted what it called changing the rules after it took the risks and invested considerable money in the project.

Email ThisBlogThis!Share to TwitterShare to FacebookShare to Pinterest
Labels: NG_Israel

The best of the week: the Vern Whitten autumn, 2016, photo portfolio. The best video of the week (at the site, the Brigitte Gabriel video).

Without question, the top story with regard to oil this past week: Saudi Arabia says it has cut production below 10 million bopd and will cut further in February. Close behind that was the report that Chinese auto sales are soaring and China says crude oil demand may hit a record in 2017.

The other big story is the amount of LNG that Europe is going to import from the US over the next few weeks.

In North Dakota, the big story was the huge snowstorm that hit the entire state; also here, DAPL snow removal. Globally, it was a huge week for cold and snow: Europe could run out of fuel for heating; California with 12' (feet) of snow; Britain freezes over, snowed under; snow everywhere in lower 48; global warming hits California.

Miscellaneous
Katie Ledecky nominated for world sports award
Posted by Bruce Oksol at 9:41 AM No comments:

You say goodbye, I say hello.


Two days ago, over at #DailyTrumpThought, I opined that two US senators would stop the confirmation of Rex Tillerson as SecState. Fox News is now reporting essentially that. If Mitch McConnell cannot guarantee the votes Tillerson needs, Trump needs to pull that nomination. Trump has several options; one of them is not to let Tillerson be defeated by the US Senate.

The Los Angeles Times is much more liberal than The New York Times, but even atthe LA Times things are changing, at least based on the headlines. They are subtle, but they are changing.

Someone had leak that "confidential" report.

Data points:
Others could argue these are just estimates and it will cost much, much more. As the project gets pushed farther and farther out, it will cost more.

The good news. The governor could always ask the president to re-negotiate the deal. Trump could always make Arnold his apprentice to oversee the project.

Every Saturday I look forward to relaxing with the WSJ and writing short notes about book reviews and recipes. But today, after a quick look at the "Review" and "Off Duty" sections, I'm not in the mood. Maybe later, the articles will attract my attention but the first time through, they did not.

My mind is troubled.

Instead I pulled a book off one of my library shelves: Scotland, Nigel Blundell, c. 1998, a Barnes & Noble imprint, printed in China. This is a coffee-table book, that is surprisingly good.

This will be simply notes from the first chapter (geology and geography): it might get me in the mood to re-read Samuel Johnson's The Journey to the Western Island and the Journal of a Tour to the Hebrides.

Some notes and observations:

We'll meet nae mair at sunset when the weary day is dune,
Nor wander hame thegither by the lee licht o' the mune.
I'll hear your steps nea langer amang the dewy corn,
For we'll meet nae mair, my bonniest, either at e'en or morn.

The yellow broom is waving abune the sunny brae,
And the rowan berries dancing where the sparkling waters play;
Tho' a' is bright and bonnie it's an eerie place to me,
For we'll meet nae mair, my dearest, either by burn or tree.

Far up into the wild hils there's a kirkyard lone and still,
Where the frosts lie ilka morning and the mists hang low and chil.
And there ye sleep in silence while I wander her my lane
Till we meet ance mair in Heaven never to part again!

Lady John Scott in her poem Durisdeer mentions rowan berries. I've come across rowan trees before in my readings. Instead of repeating all that, here is a link.  A photograph of a variety of rowan berries is noted at wiki.

Every day when I stroll Sophia (age 2.5 years old) to the park down the road, we always pass some huge shrubs (tree-height) filled with small red berries which she wants me to pick, to give to her, so she can practice throwing them. I assume the plant is Ilex decidua, meadow holly, also called "possumhaw"; or, at least closely related. I don't know my botany so I could be wrong, but the first thing I noted about this plant before I started to learn what it was, is that it reminded me of Christmas holly. Now that I explore, it appears more likely that what Sophia and I are seeing is Ilex aquifolium, common holly, holly, or European holly).

Some reminders:
Ones I have tasted that are highlighted in Blundell's coffee-table book: