To the best of my knowledge, nothing was done to this particular well to account for the jump in production in either time period. The discussion will continue below the production profile.


If nothing was done specifically to a well to increase its production, one must look at neighboring activity. 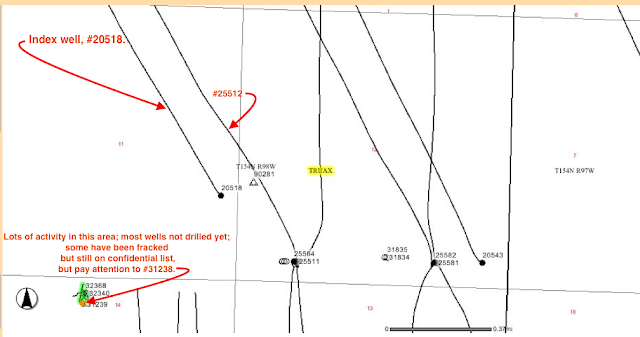 Looking at the graphic above, there is no obvious reason. There are no horizontals near the index well that could explain this increase in production.

Look at the area in the lower left-hand corner where I noted a fair amount of activity. There is a rig on site, most of the sites are still permitted only (status: loc), and the others are confidential. But here's where the new rules on DUCs and the rules on confidentiality help us out. 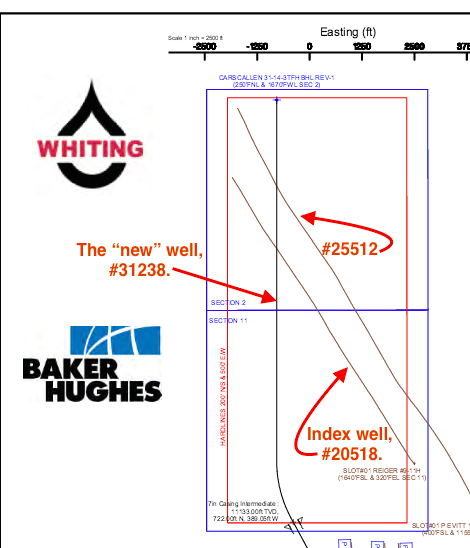 It looks like the two new wells running south-to-north are TFH wells.

If that's accurate (and it is), think about this. The index well is a middle Bakken well.

Let's look at the depth of the index well. This should be fun. According to one sundry form (the stimulation form) the vertical depth of the middle Bakken at this location was 11,112 feet. The total vertical depth was 11,147 feet. Maybe someone can provide better numbers but the vertical separation will be less than 40 feet, as far as I can tell (this is way beyond my comfort level; I could be way wrong on this, but various forms confirm this).

I guess I will leave it at that. I think I've provided enough information to at least get started on all this.

Oh, I almost forgot. Remember this from above:
#25512, practically out of the picture was taken off-line for most of October/November, 2015, probably because these new TFH wells were being fracked. That speaks volumes. By the way, was there any jump in production in this well back in December, 2015. I don't know. Let's check:

One last comment with regard to communication between the middle Bakken and the Three Forks. Look at the jump in water produced in the index well in November/December, 2015. That was most likely fracking water from the TFH well. I could be wrong, but ....

... the Saudis are looking at this very, very closely. I bet.

Disclaimer: in a long note like this there will be typographical and factual errors. I will see things that may not exist. I do not have formal training and no background in the oil and gas industry. This is for my use only to help me understand the Bakken. Don't quote me on any of this. If this information is important to you, go to the sources, the NDIC, and FracFocus.
Posted by Bruce Oksol at 9:17 PM No comments:

Crude oil production increase was not quite as dramatic in East Fork oil field as in the Pershing oil field over the past three months, but it was enough to catch my attention. Note the percentage changes, month-over-month: November-over-October, 17%; and, December-over-November,  24%).

The East Fork oil field is tracked here. It appears that the new wells coming on line were permitted back in 2014.

Again, whenever I work with numbers, and whenever I transcribe long lists of numbers I am prone to making mistakes. I have triple-checked the numbers above so I think they are correct.
Posted by Bruce Oksol at 7:32 PM No comments:

This was previously posted -- a couple of days ago. I am only moving it here as a stand-alone post so I can refer to it in the future as a case study.


This came about when I noted the production profile coming out of the Pershing oil field in the North Dakota Bakken between October - December, 2015 (inclusive, those three months).

This is an extraordinary bit of data. This post alone is worth the price of the subscription to the Million Dollar Way blog. There are several things I will point out from this case study, but I will have to do it later. I am on may way to watch some international water polo competition. But the data below is incredible. The Bakken never fails to surprise me. 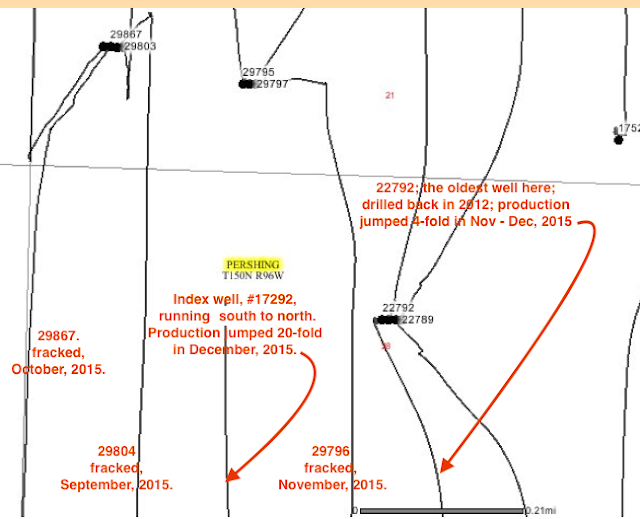