The jobs report for March, 2017, was atrocious. But if this story is accurate, it's quite a story, and again raises the question: what in the world was Obama doing for eight years? The story: US manufacturing jobs reach highest level in 8 years.


The United States added 11,000 jobs in manufacturing in March reaching a total of 12,392,000 people employed in the manufacturing sector, according to data released today by the Bureau of Labor Statistics.

White House shuffle? Trump eyes new chief of staff; House leader on short list -- Axios. Broad shakeup of White House, rumors:
"This is what a commander-in-chief looks like." -- Ryan Zinke, Secretary of the Interior, from Montana; good for him. His wiki pic (I doubt he got to pick his pic): 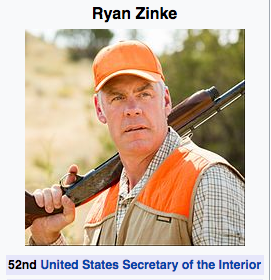 Zinke was the first Navy SEAL to be elected to the U.S. House of Representatives.
Posted by Bruce Oksol at 8:00 AM No comments:


Where might all that gas go? As we’ve said in many blogs, the Marcellus/Utica region has made the Northeast essentially self-sufficient when it comes to gas, and has been pushing other producers out of the Midwest, the Southeast and other areas. So in many ways it comes down to exports, and Agua Dulce is key, not only for pipeline exports to Mexico but for gas supplied to the LNG export terminals in Corpus Christi and, perhaps, to other planned LNG terminals up and down the coast from Corpus.

So it seems quite probable that at least two—and maybe all three—of the Permian-to-Corpus pipeline projects we’ve been discussing will advance to construction. The question then will be – how much of the  gas flowing on those pipes to Agua Dulce be exported, and how much will need to work its way up the Texas coast and battle Marcellus/Utica producers for Texas Gulf Coast Industrial Corridor customers? Now that’s an interesting question that we’ll consider in an upcoming blog.

Scott Adams: the Syrian gas attack persuasion.
Posted by Bruce Oksol at 6:04 AM No comments:

April 8, 2017: something tells me the "bad, bad report" yesterday was somewhat of an anomaly: too many other data points do NOT validate the "jobs created" number. For example:

That brought the nation’s unemployment rate down two-tenths of a point to 4.5 percent.

Dow futures: flat, after being as much as 140 points down immediately after US military action against Syria.

Disclaimer: this is not an investment site. Do not make any investment, financial, job, relationship, or travel plans based on what you read here or think you may have read here.


A second major health-insurer has decided to quit selling individual policies in Iowa, raising fears that tens of thousands of Iowans will have no options for coverage next year.

Aetna informed Iowa regulators Thursday that it had decided to stop selling such policies, which cover people who lack access to employer-provided coverage or government plans. The move would affect 36,205 customers, the company told regulators.

2013, chemical weapons used in Syria: where was Obama? That's the question folks in the Mideast are asking today. Maybe the era of "leading from behind" is over.

If it moves, tax it: California legislature goes along with governor's proposal -- increases gasoline excise tax at the pump; raises vehicle fees by $5.2 billion / year for road repairs (wink, wink) and rapid transit (i.e., the bullet train). Anyone who thinks this is about potholes and not the bullet train has not been following the news (money is fungible). Data points:

Posted by Bruce Oksol at 5:56 AM No comments: