2Q14 US GDP To Be Reported This Week; Your Guess

Disclaimer: this is not an investment site, nor is it a macro-economic site, but I'm bored tonight with the granddaughters gone, and looking to replace the current poll. This polling question is no worse than some, and may, in fact, be better than most. Whatever.

Having said that, first the results of the current poll in which we asked whether folks would fly on a plane using jet fuel refined from highly volatile Bakken crude oil:
Obviously a tongue-in-cheek poll but I'm glad -- it appears -- folks answered rationally.

Now, for the new poll, which is not "tongue-in-cheek" but probably not all that interesting.

What do you think the 2Q14 US GDP will come in at?

Reader Requests Information Regarding Participating As A Non-Operator

Over at the discussion board, a reader asks the following question:


I am having difficulty finding information about becoming a direct participant in a well. Can anyone here shed any light on this for me? I have a small interest in the Big Bend field of the Bakken and am looking to invest if I can find reliable info. Thanks to all.


My hunch is this question is too open-ended. Two things might help:

Regardless: hopefully by the end of the week we will have more on this. I can't provide any input because I own no mineral acres and have no direct experience with this issue.

The only thing I "know" is that going through a landman is probably the best way to get specific questions answered. I assume "everyone" will suggest legal advice from an oil and gas lawyer.
Posted by Bruce Oksol at 9:17 PM 1 comment:

This is what the configuration / current status of the fourteen (14) CLR Wahpeton wells currently look like. For newbies: the green open circles designate wells that have been drilled to vertical depth, probably to "total depth," and waiting to be completed / fracked. Solid dark circles are completed wells which are active and producing oil. It does not necessarily mean they have been tested and an IP reported.

For previous views and pertinent posts:

Email ThisBlogThis!Share to TwitterShare to FacebookShare to Pinterest
Labels: GIS_ScreenShot

While updating it tonight, I was reminded of three recent Whiting wells. The IPs for these three wells were reported back in July, 2013. Tonight we follow up with their production for the first 10 months, not even a full year yet (for newbies, I consider a high-cost Bakken well to have paid for itself when it hits 100,000 barrels cumulative):

Quite incredible to say the least.

Screen shot of where this 3-well pad sits: 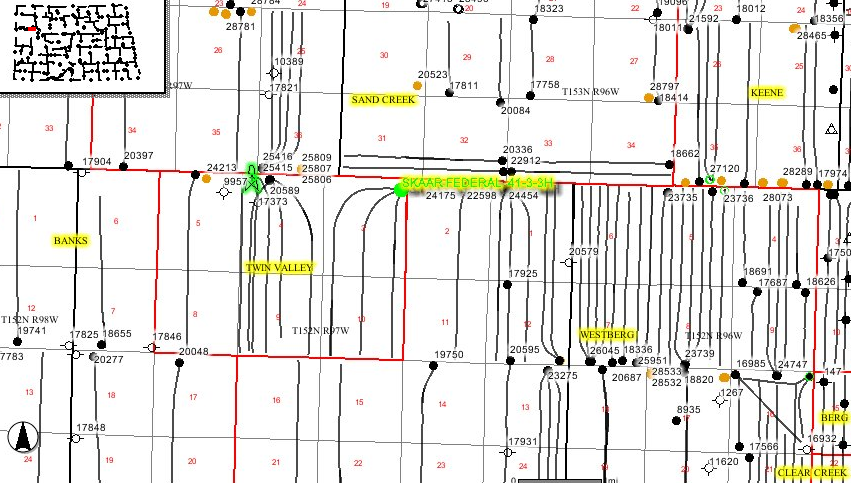 Whiting's record-setting Tarpon Federal (#20589) well is just about a mile to the east of the Skaar Federal wells. Recently, in the daily activity reports, there have been a number of permits for Sand Creek oil field; note the location of Sand Creek relative to the highly prolific Banks, Twin Valley, and Westberg field.

As high as the IPs are for the Skaar wells, they are not records. One can see the record IPs at the FAQs page. Interestingly enough, the Westberg has had record IPs, but is competing with the Banks oil field for that honor.

The total production of these wells compare nicely with recently completed EOG wells. Whiting is using a new completion technique. These wells were only 30 stages with 3 million pounds of proppant (mostly sand, some ceramic) compared with 50+ stages and 10 million pounds of sand for the comparable EOG wells over in the Parshall oil field.

My review of Delacroix's Journal over at Amazon:

... and he jumps into "fifty shades of grey" within the first few pages of his diary -- noting that his new girlfriend's "breast is fluttering."

This is really quite a sensational little diary; it is incredible it was not lost, that it was saved.

I used to think Monet was the most important Impressionist; I wonder if it was not Delacroix.

As far as the "thin pages, tiny font," this makes the book particularly unique and a huge plus. I almost feel like I am holding a "holy book" while reading it. I have no problem reading it; the reader who mentioned that the type showed through must have been reading under a very strong light and very much uninterested in Delacroix.

Delacroix was as much a writer as a painter -- anyone interested in the Romanticism period should take take a look at this book. It also explains why Delacroix is noted for his "Arab" paintings.

We're getting ready to go to breakfast or brunch down on Portuguese Bend. I remember some of the most remarkable breakfasts I had some years ago while stationed in England. On Sunday mornings, I would run (literally run) down the hill to the local village store, buy fresh bread, fresh ham, eggs, and pick up both The (London) Telegraph and The (London) Mail. I came back home, cooked a great breakfast, and spent a couple of hours reading two great newspapers, before taking a long walk through the Yorkshire countryside. Yes, afternoon tea, later.

Playing this very softly can put one to sleep at night, but playing it loudly in the morning brings back some wonderful memories. I still think Leonard Cohen is one of the best "modern" lyricists/poets.

Perhaps this is why I'm thinking of poets this morning. Don sent me the link to a story in today's Dickinson Press:


If you give DW Groethe a subject, he can give you a poem and a song.

It might be about cowboys, true love or the oil boom.

“Words, once they get inside your head, they end up creating a whole new world,” Groethe said. “They’re just wonderful to work with. It’s innate.”

He was just a boy when North Dakota saw its first oil boom in the 1950s. The parents of his two best friends worked in the oilfield.

The Williston native was working on a fine arts degree in theater at the University of North Dakota when the second boom hit. He remembers “a lot of fun and a lot of people.”

From Groethe’s home across the line in Bainville, Mont., this boom is “massive.”
“It’s beyond belief. I run across a lot of ranch kids building a stake for themselves (in the oilfields),” he said.

A close friend introduced me to DW Groethe and to Chuck Suchy, another cowboy poet.

Regular readers are aware of another North Dakota lyricist and poet: Jessie Veeder. Her blog is linked at the sidebar at the right. Her post today is very much worthwhile reading.

Unfortunately I can't find a short video of DW Groethe but for those unfamiliar with cowboy poetry:

First, a bit more "fifty shades of grey" when he talks about / thinks about painting his new girlfriend in the nude:


I can't prevent myself from blushing, and in other ways too, I've not enough self-control. I'm always thinking about the model's discomfort. I don't observe, closely enough before beginning to paint.

I will leave it to the reader to figure out what self-control is lacking / is visible in a 24-year-old male painting a female nude.

Second, an excerpt on his thoughts about God, the same that probably concern many sentient beings:


I have just caught a glimpse of [the constellation] Orion shining amid black and storm-swept clouds. At first I thought of my own insignificance compared with these worlds hanging in space. Then I thought of justice and friendship of the divine emotions graven on the heart of man, and I no longer felt anything to be great in the universe, save man and his creator. I have been impressed by this idea. Can it be possible that He does not exist? But could a mere chance combination of the elements have creatd the virtues reflections of an unknown grandeur! If the universe had been produced by chance, what would conscience mean, or remorse, or devotion? O! If only, with all the strength of your being, you could believe in that God who invented duty, all your doubts and hesitations would be resolved. For why not admit it? It is always questions of this life, fears for it or for your comfort, that distrub your fleeting days -- days that would slip by peacefully enough, if at the end of your journey you saw your Heavenly Father waiting to receive you! -- Delacroix, Saturday, October 12, 1822

Email ThisBlogThis!Share to TwitterShare to FacebookShare to Pinterest
Labels: GIS_ScreenShot

Link here. Regular readers are well aware of this story. Google "bananas milliondollarway" and you find this post, dated April 13, 2014 -- well, I guess it isn't that old -- just a few months.

On a brighter note a reader sent me this link: some banks in western North Dakota continue to limit the amount of money that can be deposited; the banks are simply receiving too much money to manage/lend. The Grand Forks Herald is reporting:

But this was most intresting:


Among the banks that has seen deposit growth increase significantly since the end of 2005, just before what’s considered the start of the oil boom, is Choice Financial based in Grafton, N.D. Deposits there increased from $282 million to $585 million by March, according to the FDIC.

Brian Johnson, Choice CEO, said certain industries have seen more loan growth than others over the past few years. He said the bank’s portfolio was roughly 70 percent agriculture-related 10 years ago, whereas it’s less than half today.

The Grafton bank was probably singled out early in the story because it's a relatively small town, albeit a very important town for rural North Dakota. However, the town is located on the opposite side of the state from the Bakken, and its growth has nothing to do with Bakken.

In Grand Forks itself:


Meanwhile, total deposits at Grand Forks-based Alerus Financial grew from $557 million at the end of 2005 to $1.2 billion in March.

Later in the article it was noted that a New York City bank was interested in acquiring a bank in Harvey, ND. Harvey is also located nowhere near the Bakken.
Posted by Bruce Oksol at 8:57 AM No comments: