A reader alerted me to this. I had seen it earlier but I was not going to post it until I saw this story: the day after Christmas, 75% of US sees freezing temperatures, and it's particularly severe in New England, which naturally led to the next question, "how's that renewable energy working out to keep the heat on?" 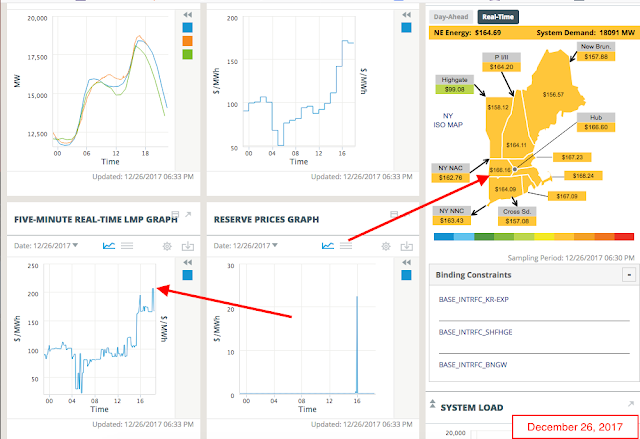 DUCs reported at completed: none.

Hillary aghast? See this site. In case this link breaks, the issue -- US government looks to subsidize coal industry.
Posted by Bruce Oksol at 4:55 PM No comments:

Disclaimer: in a long note like this there will be typographical and factual errors. It is difficult to separate opinion from facts. I may be seeing things that do not exist, and I certainly see things differently that a lot of analysts.

Case study: as you go through this case study, think about this. Some folks are suggesting that operators are running out of new drilling locations in the "sweet spots" in the Bakken. I don't buy that. To some extent, "sweet spots" are defined by the price of WTI. Whatever.

The bigger story is continued management of existing wells. Somewhere else one can find the exact number of Bakken wells that have been drilled and are still being "managed." I come up with about 10,500 Bakken wells. The vast majority of those wells have not been re-fracked, either with a mini-re-frack, a modest re-frack, or a full-fledged re-frack.

If one considers an existing Bakken well as a well that could be re-fracked, one could argue it's a "new" drilling location. That may not make sense, but think about it as you go through this case study. This makes unconventional (tight oil) very different from conventional oil.


FracFocus:
The other two wells in the drilling unit unremarkable at this point: #25761 and #25760, although the latter was off-line 10/17; it's not a great well, and wonders if this one might be a candidate for a re-frack? 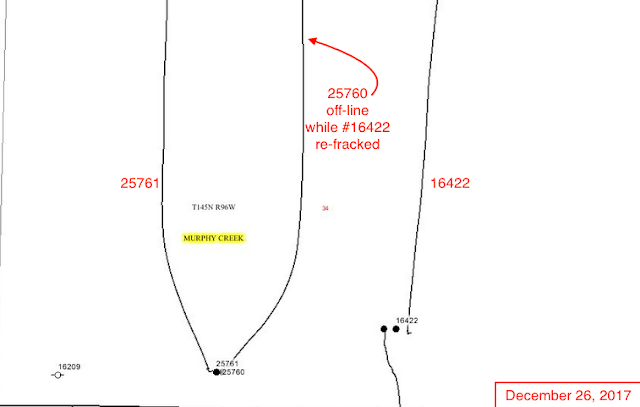 EIA to report US crude oil production for October, 2017, at the end of the week. Richard Zeits forecast and my comments:

It will take them more than a decade to balance their budget.

From Bloomberg:
From another story earlier this month, this is how the Saudi's plan to execute their budget: 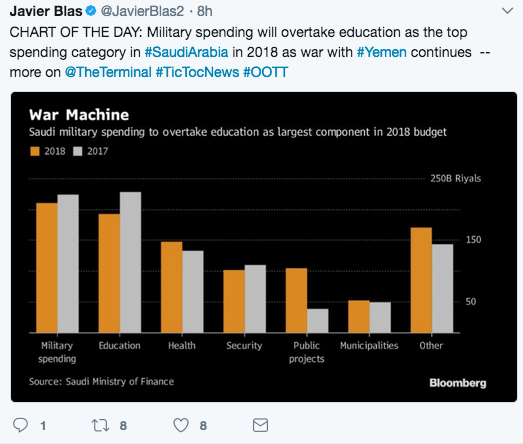 This well was reported as dry today:
This is from the summary at the file report:


The depths reported by the driller and the logger differ by 56 feet. This could be due to mis-counting drillpipe (2 joints). [The geologist] believes a more likely explanation lies in the abandonment of magnetically marked cables on the wireline truck. This results in depths measured by the logger being less than that reported by the driller. There was fill in the hole; during the latter part of the hole [the geologist] observed black shale cleats up to 1" by 1 1/2'  x 1/2'. The up-hole shales were sloughing in irregular timed pulses. The logger (wisely) did not spud the tool on bottom. [The operator} was in and out of the hole several times whilst waiting for a logging truck to get to location, and [the geologist] cannot image the rig crews mis-counted the drillpipe the same way every time. [The geologist] thinks the presence of ill, and the known error in depth measurements by logging companies since abandonment of marked cables can account for the discrepany in the depths reported by the driller and the logger.

Wells coming off confidential list today: have been updated.


Before the open, WTI was $58.44. Early after the opening, WTI jumped to $59.41, said to be due to a pipeline blast in Libya and  the loss of Forties oil right now.  My thoughts: the jump in price had little to do with the Forties pipeline or the Libyan story. The Forties pipeline story is not new; the pipeline has been repaired; and, already the pipeline is being tested for re-start in early January, just as the company said would happen. Libya? When do we not hear of a problem in Libya. Some might argue that WTI is headed toward $60 on a "no-news" story.  [Later: on CNBC we now learn that the pipeline blast in Libya has resulted in 90,000 bopd -- that is so inconsequential as to be laughable as a cause for the jump in the price of oil.]

API drawdown data: normally, the API reports API US crude oil inventories late in the afternoon on Tuesdays; normally I find those reports linked at this site; so far it's not on today's calendar, suggesting the report will be released tomorrow; it's my gut feeling that some folks know that data point before it's officially released and could affect the price of WTI; WTI was up significantly despite no "real" news -- a Libyan pipeline explosion removing 90,000 bopd isn't a big enough story to move the price of oil;

TSLA: earlier today, a reader sent me this link, suggesting that it will be years (decades?) before Tesla can possibly have a positive cash flow. Now this, the "death cross": 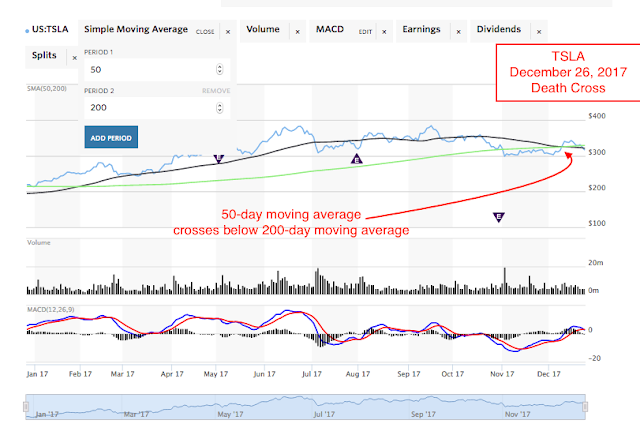 Market: whatever the reason for the jump in WTI (and Brent), the bigger story is the jump in share prices across the board in the oil sector. Whoo-hoo.


Continental Resources, Inc. has had a number of very good results in the Bakken since the beginning of 2016.

We pulled the production data of 88 CLR Bakken locations turned to sales after January 1 of 2016. The results were quite good. A number of locations topped 200 KBO, and one did this in seven months. Two horizontals produced over 350 KBO in 14 months. 74 of the 88 completions had laterals of at least 9,000 feet.

December 26, 2017: It isn't just the Bakken enjoying global warming. Some other headlines today --

Most interesting: the "cold" months in western North Dakota are generally later January, and early- to mid- February. 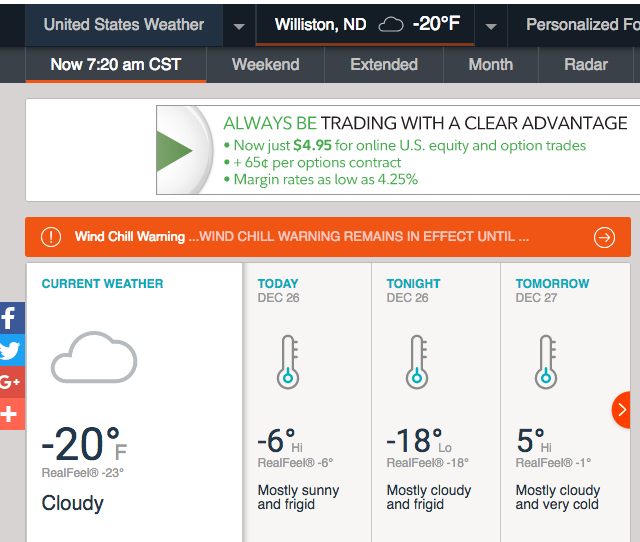 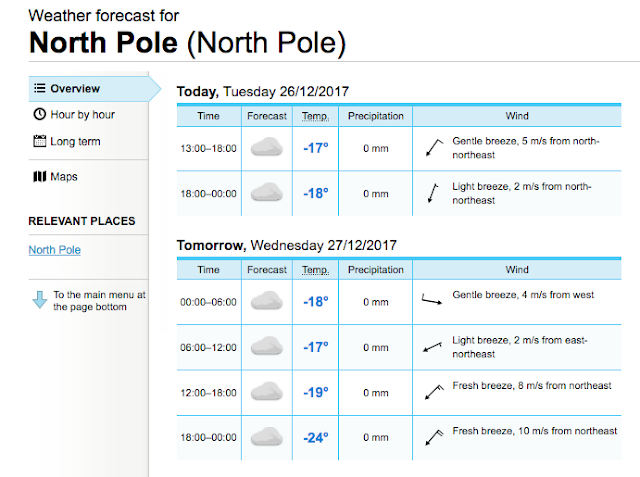 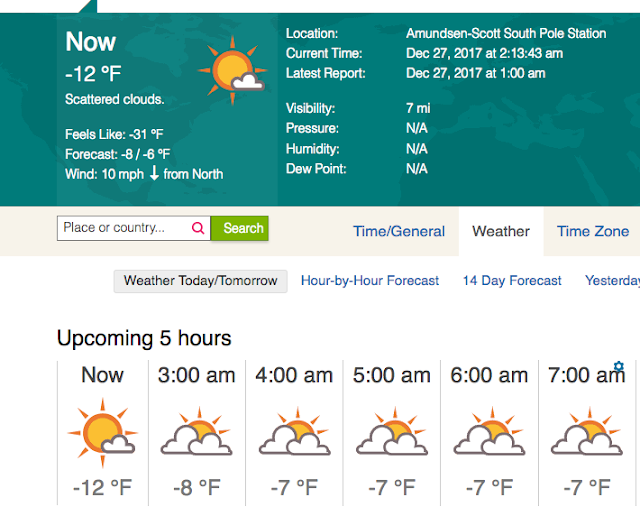 NB: note the names of the two earlier wells; and the name of the re-fracked well. 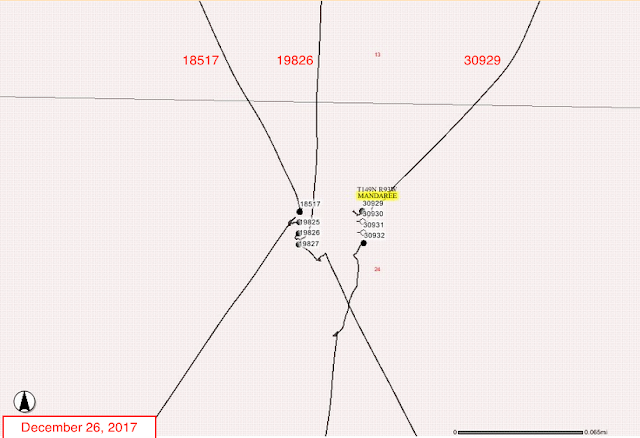 I track this well at this post. This page will not be updated. Random update of production data for this well:

Back on October 28, 2017, there was a post discussing recent comments by QEP on re-fracking. In that post:


Likely candidates, all in Heart Butte (there may be other candidates) :

At the time, the data for several of the wells above was not provided, but it has now been updated.

I have long forgotten how those five candidates were chosen as candidates for re-fracking. I assume it came from going through the production profiles of producing wells in Heart Butte.

So, let's look at the last 10 months (or so) of production from each of those wells:

Posted by Bruce Oksol at 5:58 AM No comments: