Earlier this week I posted a story -- Chesapeake and Vine in Louisiana. I really wasn't all that interested in the story but the Louisiana angle caught my eye and I posted the story.

How interesting. Much more to the story. See the update at the linked post above.

NFL: last night, a Thursday night, we had the Washington team play the New England Patriots. I don't know any more than that; I did not watch. Now, surprise, surprise, assuming this is live, on a Friday night, the Buffalo Bills are playing the Detroit Lions. Again, I won't watch. I was just surfing through Hulu. I am absolutely amazed at what Hulu offers: in this case, it's the NFL Network. Are you kidding me? I do not know if the NFL Network will be available "forever" on Hulu. Whatever.

Cathie Wood: I don't know if folks had a chance to read the AirMail.news story regarding Cathie Wood which I linked the other day. I can't find my post now which suggests I posted it and then took it down for some reason. Maybe it's there and I just can't find it. Whatever.

Anyway, I finally got back to the article and read it again. It's well worth the read if you've heard a bit about Cathie Wood and ARKK and don't know anything or very little about her.

I was curious from where she came. I guess in Spanglish, I was curious de donde vino ella. LOL. [For those who do not know, Sophia and I are "learning" Spanish together using the Duolingo app and having boatloads of fun.]

An interesting story, Cathie Wood. Long story short, no glass ceiling for her:

I was mesmerized when I first saw her in an interview on CNBC, or should I say when I first paid attention to her. It was as if, to plagiarize a phrase, "she emerged de novo like Minerva from the head of Zeus."

Somewhere recently on the blog -- actually I guess that's in draft also -- recently I've become a convert to "bitcoin." I don't own bitcoin but I do know what it is and it will be a viable currency. Up until two weeks ago, I had no interest in "bitcoin," and pretty much ignored it. Now, 180° turn.

One of the better discussions during our family reunion was talking about technology. Many of my extended family members are high-functioning engineer-types who are involved in high-level technology at pretty big technology companies.

For "bitcoin" to become mainstream, I said there needs to be a tipping point. I mentioned that one of the "first" steps toward that tipping point was Square.

The next step was that $29 billion deal with Australian Afterpay.

We have yet to see the "tipping point" itself but I know what that tipping point will be but I'm keeping it a secret. I don't want to give it away. LOL. Seriously, my skin is not thick enough to absorb the push back and laughter. But regular readers of the blog, knowing my craziness, interests, and posts, can probably guess.

From the linked Airmail.news article:

As probably only Wood could do, she recently corralled billionaires Elon Musk, the co-founder and CEO of Tesla, and Jack Dorsey, the co-founder of both Square and Twitter (Wood's 17th-largest holding), to join her for an hour-long virtual panel discussion to talk about Bitcoin in all its wonderfulness.

Enough of this, time to enjoy some music.

Oh, before I get to the music, one last story from the linked Airmail.news story that almost knocked me off my chair.

Quick: over at the sidebar at the right, I have something called "the next big thing." Quick, for those who have been reading the blog since the beginning, what was the "first" next big thing?

So, what does that have to do with Cathie Wood? From the linked Airmail.news article: Cathie Wood's meeting with Bill Hwang was apparently completely innocent, unarranged.

On CNBC, Cathie Wood said, "On our way back from that event, we --Bill Hwang and Cathie Wood -- were exchanging stock ideas back then -- this was back in 2014 or thereabouts -- and I know he bought into one of the stocks in which we had a high degree of confidence, Netflix." 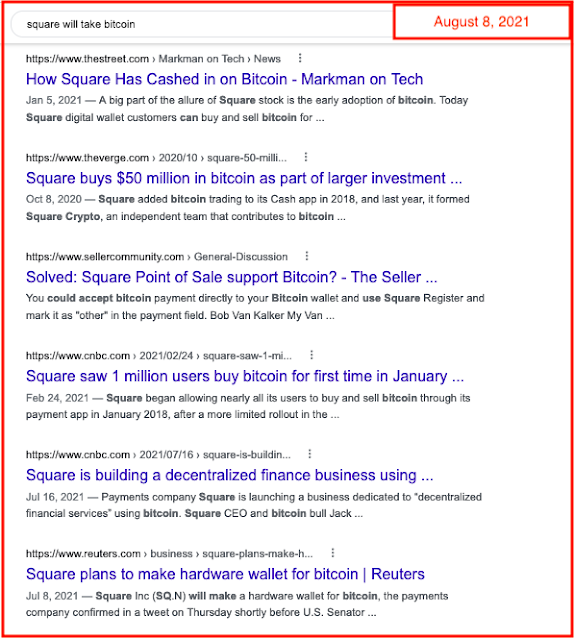 Katie Ledecky: alone on the NYSE closing bell stage! Has her own "logo." Interviewed on closing bell.

Inflation: lots of talk about inflation but doesn't seem to be impacting the market or quality of life for Americans. In fact, listening to the talking heads on CNBC, if folks are concerned about inflation, stop buying things. LOL. Stop buying unnecessary plastic things, paraphrasing Nanci Griffith, RIP.

There's plenty of beer at $9.99; quit buying $12.99 beer and my hunch the more expensive beer would trend toward $9.99. Just saying. The most interesting thing: gasoline prices seem out of line (on the high side) compared to the price of oil. Check out the percentage of imported crude oil.

Inflation: remove food, energy, rent, health, lumber, and used cars, and it looks like inflation is not all that bad. According to one expert on CNBC the inflationary trajectory has already changed direction (declining).

The University of Michigan's Consumer Sentiment Index fell to 70.2 from the final July reading of 81.2.

Professor Richard Curtin, the survey's chief economist, pointed out that the index has recorded larger losses only six other times in the past half-century.

In each of those declines, there was a connection to sudden negative changes in the economy, such as last summer's shutdown or the financial crisis. In other words, the American public is reacting to recent news as if something very bad had just happened.

K-cups over at Amazon run at 35 cents to 85 cents a piece. I won't pay more than 35 cents if I don't have to. One week ago Amazon had a sale on the brand I buy, at 26 cents per K-cup. Think about that: 26 cents for a cup of coffee. Even McDonald's charges 69 cents for a senior cup (that was last year when I last visited), and Starbucks trends towards $1.75 for a tall black coffee.

I bought two cartons of that 26-cent K-cups and sent one carton each to one extended family member and to an AirBnB house where we stayed a year ago, and thoroughly enjoyed the experience. We will probably never stay there again, but it's been fun to send them a box of K-cups every few months.

Holy mackerel: Amazon has that K-cup coffee down to 21 cents per K-cup. Less than a quarter for a cup of coffee. Give me a break. Link here, graphic below. And for a subscription, down to less than 20.4 cents. I have trouble understanding why mom-and-pop donut shoppes aren't subscribing -- 20 cents "wholesale" and selling it for a buck a cup. Wow, they must be buying coffee from their own source for less than twenty cents. I don't know. Imagine the margins on Starbucks coffee. 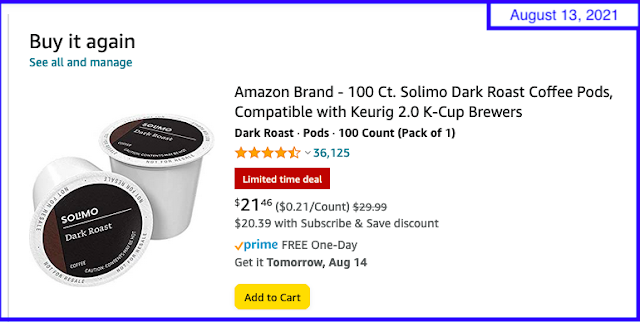 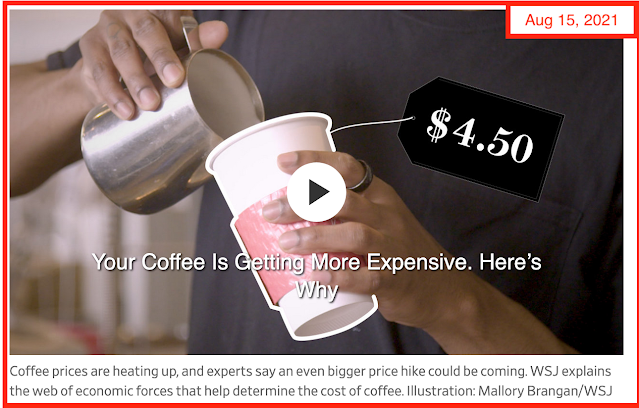 "There may be some contaminated soil in the berms built around a three-well fire near Lake Sakakawea, but DEQ inspectors said the site looked better than they had expected, and they don't anticipate cleanup taking very long."

Louisiana: has the fourth wave peaked? It's subtle, but possible.

South Dakota: way too early to see the impact of the Sturgis Rally, first full week ends today. Having said that, number of daily new cases up a bit. Daily new deaths negligible. Most interesting: compared to three and four waves of Covid-19 since this whole thing began, South Dakota has experienced only one wave, lasting from September 3, 2020 - March 3, 2021. Link here.

North Dakota: almost identical graphs with that of South Dakota, and North Dakota had not motorcycle rally. Link here.

Iowa: this will be the most interesting state to follow for the next six weeks. The Iowa State Fair opened this weekend. One million unmasked visitors and no immunizations required. The "Field of Dreams" baseball game was played there last night. Iowa's graphics exactly match that of North Dakota and South Dakota, except possible an early first wave (deaths), but only one wave for new daily cases. Most interesting, a second wave seems to be developing -- and if it does, it should be noted this second wave began before the Iowa State Fair and before the Sturgis Rally. I doubt many riders came from / through Iowa. The vast majority would be local, west, and south. Link here.

Wow, wow, wow. Assuming the CDC numbers are correct, "we" haven't had such a good day for vaccinations in a long, long time. In the most recent 24-hour period, the US came close to administering one million vaccinations.

One has to go all the way back to June, 2020, a year ago so see more than a million vaccinations in one day.