Russian Fleet May Be Loitering Off East Coast Of Crete -- The Little Tug That Could -- November 3, 2016

The little tug that accompanies Russia's Northern Fleet with the aircraft carrier is now anchored off the east coast of Crete (it may or may not be anchored, but it is not moving). Last "ping" was three minutes ago.

On an unrelated note, I've updated "Mideast On The Brink." Turkey could be headed for civil war. From "Breaking News":

And, speaking of the "Mideast On The Brink," here's another one. Egypt "tiptoes" toward a "breaking point."  It looks like al-Sisi is in for the fight of his life ... and in the Mideast, unless your name is Assad, that's usually not a fight you are going to win.

The good news: another US hurricane season is rapidly coming to an end.

Mitigation Proposal For Pressure Pulses On Existing Wells Due To Completion Of Neighboring Wells -- November 3, 2016

From a sundry report dated/received February 22, 2016:


ISSUE: EOG resources is currently executing a downspacing and infill drilling program. During this process the new infill wells are being hydraulically fractured offset to existing/producing wells.

The existing wells in close proximity to the new infill wells are shut in during the drilling and completion process.

Pressure pulses have been noted in the existing shut-in wells during this process. Due to the pressure pulses, sand from the completions in the original wells can become dislodged and enter the wellbore. When sand enters the existing wellbore it can damage pumping equipment and/or plug the wellbore. When this occurs wellbore intervention is required to replace the damaged equipment and may also require the wellbore to be cleaned out, both operations are costly and slow the process of returning offset wells to production.

PROPOSAL: As a mitigation measure, EOG is requesting approval to fill the existing wellbore with produced water from nearby producing wells. The fluid would increase the hydrostatic pressure in the existing well and assist in counter-acting the pressure pulses and sand influxes impacting the well from the drilling and completion process of the infill wells.

The fluid will be pumped at a very low surface pressure with a fluid pump. Pumping pressures are planned below 500 psi. At or before reaching 500 psi, pumping would cease, keeping the pressure below fracture pressure. 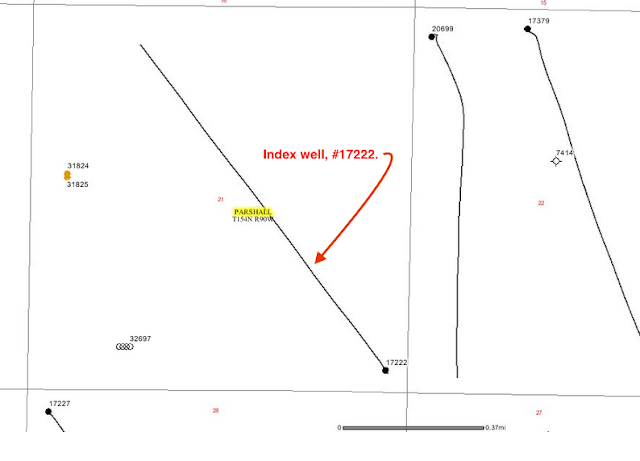 In the graphic below, #17120, a short lateral was drilled back in 2008. In 2016, it was taken off-line for a few months while neighboring wells were being fracked. Below the graphic are the production profiles for #17120 (the older well) and the neighboring well recently fracked. Also, note the amount of proppant used to frack the new well: 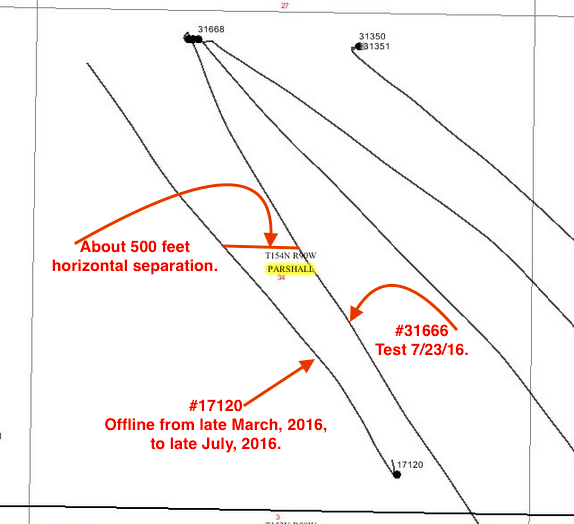 An area where Enduro will be using water injection for enhanced oil recovery. From today's daily activity report, this well has been permitted for water injection, enhanced oil recovery, see graphic below:
Comments regarding the renewed permit:
This well is located in Newburg oil field, Spearfish/Charles pool, many of which are simple vertical wells. Many of them produced a fair amount of oil over the course of their life times.

Some are still active. For example, the index well in the graphic below, has produced more than one million bbls of oil is still active, and will celebrate its 60th anniversary next November, 2017: 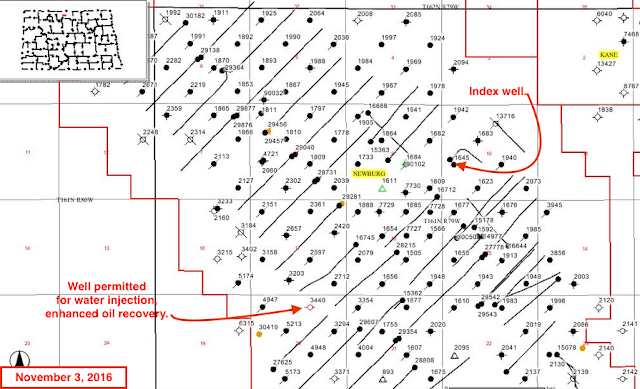 I forgot to place an arrow designating the location of this field on the overview map of North Dakota, but if you look closely you can see a red "dot" near the Canadian border, in Bottineau County.
Posted by Bruce Oksol at 7:58 PM No comments:

Earlier today it was noted that EOG renewed six Hawkeye permits in Antelope oil field. This will be a 7-well pad; there is already one producing well on that pad.

I'm mentioned this well in a number of locations on the blog.
This may be the best post. In addition, I follow the EOG Hawkeye in Clarks Creek / Antelope area here.

This is a screenshot of the proposed 7-well pad: 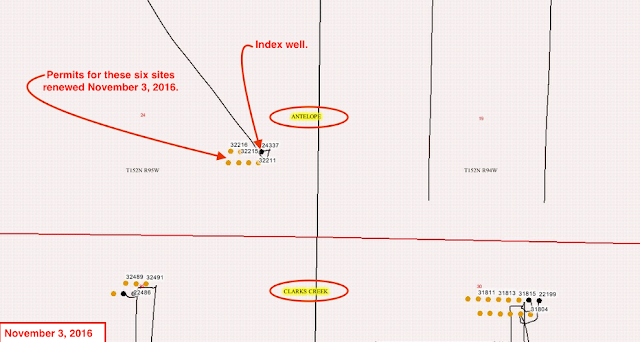 And zooming out to see the general area: 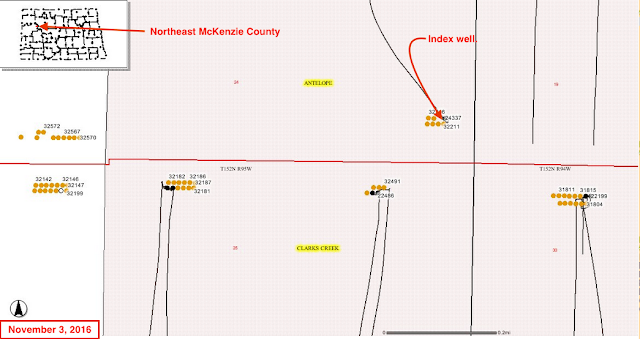 Posted by Bruce Oksol at 2:02 PM No comments:

This graphic is worth ten thousand words. Perhaps later I will come back and write about 300 words on the graphic. 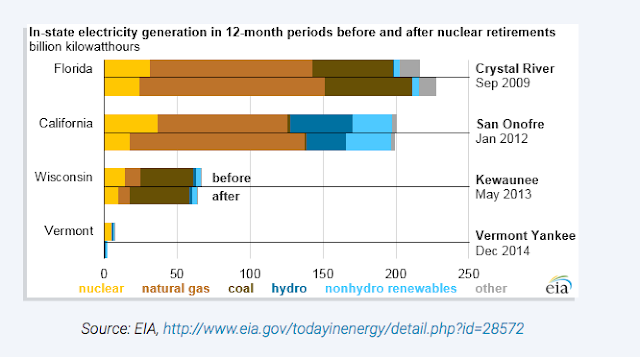 Jobless Claims Rise To Highest Level In Three Months -- Less Than A Week Before Folks Can Vote To Stay The Course -- November 3, 2016


I said it sometime ago, and I will say it again: it's time for DAPL promoters and North Dakota to part ways. It was real. It was fun. But it was not real fun. Make it a trifecta: the Keystone, the Sandpiper, and the DAPL.

The spin continues: Business Insider highlights that the number of people filing for unemployment beneefits is at a 16-year low, but finally get to the point:


Initial jobless claims, which counts people applying for unemployment insurance for the first time, rose by 7,000 to 265,000 last week.

So, not only did the number of claims rise substantially but analysts had actually forecast the number would drop.

Yes, here it is, Bloomberg's headline: jobless claims rise to highest in almost three months. The lede includes that word I love: "unexpectedly." Really? Did gasoline demand foretell the trend?

Facebook dropped more than 8%: CEO Zuckerberg says he anticipates a "meaningful" slowdown in revenue growth rates, and that his plans call for "aggressive" investments next year. For Zuckerberg/Facebook, it seems it's all about advertising dollars. Jeff Bezos continues to look like one of the few that remains a true visionary.

We have really entered a new world. One of our favorite, and we have many -- grocery stores in the local area is Tom Thumb -- I think it's a Safeway store -- now has home delivery.

I just got an e-mail note that I can order my groceries on-line, and Tom Thumb will deliver (in one-hour delivery windows).

To see how I might like this, they are offering a $10 discount and free delivery on the first purchase.

Truly amazing. Folks can order on-line while at work, and then schedule a delivery for the first hour they return home from work that evening. Truly amazing. Yes, I know everyone in San Francisco and NYC and Chicago have been doing this for ages, but I grew up in North Dakota and never would have imagined this would happen in my lifetime.

This was on the juke-box when she walked into the restaurant:

Update On Natural Gas Pipelines To New England -- RBN Energy; Trump With 10-Point Lead Among Those Who Say They Have Definitely Decided -- November 3, 2016

Gotta love them Norwegians: nearly 15,000 Norwegians apply to hunt 47 wolves in controversial culling that will slash population by 70% - VRT -- from "Breaking News." #WolvesLivesMatter; and, the movie, "No Country For Old Wolves."

Poll: I've always wondered if Trump might actually go over 50%. When I saw the USC-Los Angeles Times poll yesterday, I thought it might be possible. I haven't followed the Rasmussen poll very closely so I don't know if this has happened before, but Rasmussen is reporting that Trump is polling 50%+ among those who say they have definitely decided. In the "overall" poll, Trump leads Hillary, 45% - 42%. But look at this:


Eighty-eight percent (88%) of voters say they are now certain how they will vote. Among these voters, Trump has a 10-point lead over Clinton – 53% to 43%. Johnson gets two percent (2%) and Stein one percent (1%). This is the first time any candidate has crossed the 50% mark. Among those who still could change their minds, it’s Clinton 36%, Trump 36%, Johnson 22% and Stein six percent.

Russia's Northern Fleet: it appears the fleet is loitering just east of Crete. Its position has not changed much in the past 24 hours -- again, just off-shore from Crete suggesting there may be some re-supply activity.

ObamaCare: as if it's not bad enough, another insurer has said it will leave ObamaCare if results don't improve. Anthem says it may exit ObamaCare.


Health insurer Anthem Inc., which has so far stuck with the Obamacare markets as rivals pulled back, said it may retreat in 2018 if its financial results under the program don’t improve next year.

Anthem’s comments up the stakes for the Obama administration as the enrollment season for 2017 Affordable Care Act plans begins, with consumers already facing fewer choices and higher premiums in many markets.


Anthem’s first quarter earnings were better than expected as the company welcomed 1 million new customers across its businesses since the end of last year, including 184,000 who signed up for coverage on public exchanges under the Affordable Care Act.

In contrast to UnitedHealth Group, which is scaling back to a handful of public exchanges to sell individual policies, Anthem ANTM sees the so-called Obamacare business as a growth opportunity. Anthem, which sells policies under the Blue Cross and Blue Shield brand in 14 states, expects to remain in those markets next year with the potential for expansion should its merger with Cigna be approved. [Earlier this year, BC/BS pulled out of Arizona, ground zero for ObamaCare.]

“I think a sustainable model can be built,” Anthem chairman Joe Swedish said of public exchanges in an hour-long conference call this morning with analysts. “This remains a dynamic marketplace. Over time, we do believe we are well positioned for sustained growth.”


Natural gas utilities and power generators in southern New England will have access to additional gas supplies this winter as Spectra Energy brings its 342-MMcf/d Algonquin Incremental Market (AIM) project into service. But Kinder Morgan’s planned 72-MMcf/d Connecticut Expansion has been set back a year (to November 2017) due to permitting delays and, more important, a multi-state effort to enable electric distribution utilities (EDUs) to contract for gas pipeline capacity for generators appears to have died, and with it prospects for at least one major project.

Is New England destined to remain gas-supply constrained for years to come?  Today we consider recent developments regarding gas supply in the northeastern corner of the U.S., and what they may mean for Marcellus/Utica producers.

First it was The Wall Street Journal, then The Washington Post, and now CBS: "customers" shocked by high ObamaCare 2017 premiums.

GOP needs to run, not walk, away from this debacle. By March, 2017, ObamaCare will be dead. Its only cheerleader will most likely be out of office.

Posted by Bruce Oksol at 7:02 AM No comments: