Possibly A Record Post-Shut-In-Production Jump In The Bakken -- February 7, 2017

February 11, 2017: this one has me very, very perplexed. Note the production profiles of these three wells -- the jump in production in late 2016, in the middle Bakken well, #25961. The file record does not shed any light. At the bottom of the post, one can see where the horizontals are located. I see no evidence of any new fracking, and these wells were taken off-line for such a short period of time.


25961, middle Bakken: no pump according to NDIC paperwork; paperwork could be delayed;
[Update, January, 2018: just prior to the jump in production: a work-over rig on site, and a new pump put in; no evidence that is was re-fracked; no sundry form to suggest a re-frack and FracFocus does not show a re-frack.]
Monthly Production Data


Original Post
This is the last note I'm posting tonight. There may be some significant errors in this post. But I will leave it up overnight. I will proofread it in the morning. Consider it not ready for prime-time. Consider it a draft that if there are significant issues with it, it will be removed tomorrow.

I think the data in "the post" below and what it might be showing is quite staggering.  (I haven't pointed out everything but the data is there.)

Take a look at the data.

For those of  you with a "basic subscription" there is even more to this story which I will post at a later date, but tonight I'm too tired. In addition, I need to reflect on this one for awhile. It's possible I made a mistake; too much data; need to confirm later.

Disclaimer: in a long note like this there will be typographical and factual errors. I am doing this for my benefit only. I am probably seeing things that don't exist. Don't quote me on any of this. Again, this is for my interest and benefit only. I post it with the rest of the blog, because I don't want the aggravation of two blogs, one private, one public. Feel free to read it but again, don't quote me on it. It's probably just "one of those things." If this is important to you, go to the source.


The Post
Here's another well that had a bit of a production jump after it was brought back on-line after being shut-in for a few months:
I find it amazing how much production can jump by just taking a Bakken well off-line for a few months.

It's possible the oil was commingled in a battery of tanks and there was an error in the data regarding how much oil this well produced. There are all kinds of things that might provide an alternate explanation. If commingling was an error, to the best of my knowledge natural gas produced, sold, and flared is not similarly affected but I could be wrong.

Production profile since initial production to the present (still active):


This is what the production profile looked like during those twelve months:


Another interesting thing about this well: look at the initial production. The best this well did after a "deliberate frack" was about 7,526 bbls of oil. By simply shutting this well in for a few months in late 2013, and bringing it back on-line, production jumped more than 3-fold, for several months:

Initial production was not particularly remarkable. This was an open-hole/perforated frack in October/November, 2008. It was tested November 12, 2008. Frack: 647,200 lbs of white sand; 9,103 bbls of water gel; sliding sleeves.

Based on the file report, this was the only frack. I did not see any reports of any work-over rig action. FracFocus did not have any frack data.

Back-of-the-envelope:
The well:
Graphic of the area: 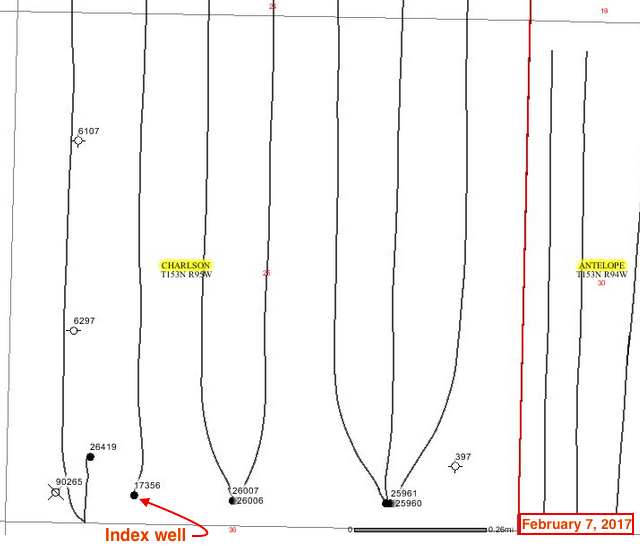 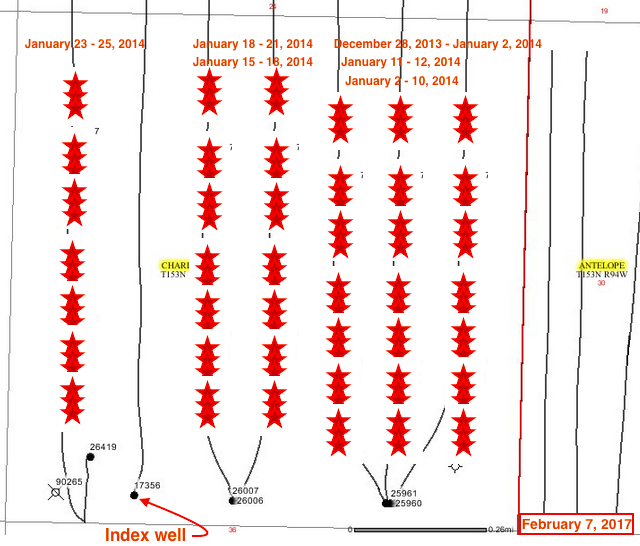