I was completely unaware of all of this. Winter well into May in the United States this year, as well as other parts of the world apparently. At the linked site, scroll down. Obviously, it's a dynamic site and after May 15, 2019, there will be different stories. But this is where we stand now: winter continues in mid-May for the US. 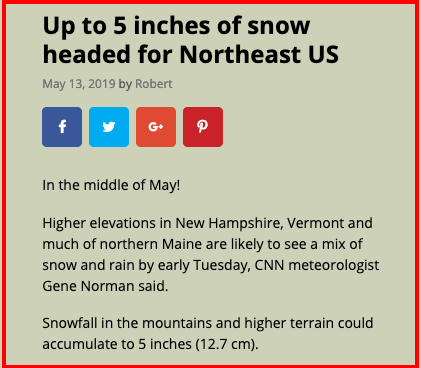 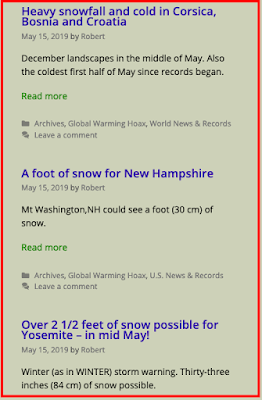 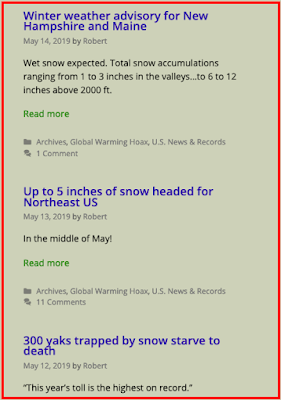 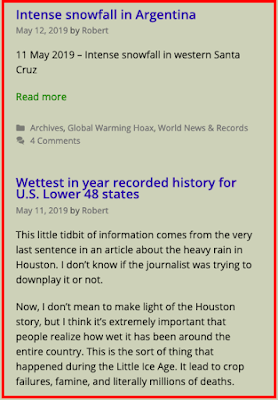 I opined at length on US crude oil exports. I suggested the long pole in the tent would be the export terminals.

A reader suggested export terminals would not be the problem. See the reader's comment at the linked post.

He's obviously correct. I was wrong.


In terms of raw tonnage, the Port of Houston is by far the busiest in the United States. The 52-mile-long Houston Ship Channel (HSC) — running from just outside downtown Houston out to an area between Galveston Island and Bolivar Peninsula — is the artery that enables the heavy ship traffic, much of it tied to crude oil, LPG, petroleum products and other hydrocarbons. But in the same way that Houston’s Interstate 45 traffic backs up during the morning commute, the ship channel traffic, which normally runs at about 60% of peak levels, can be (and has been) subject to delays when there’s an accident, visibility problems, or a slow-moving double-wide taking up two lanes. With energy-related export activity on the rise, efforts are underway to address those issues. Today, we begin a series on the issues facing some Texas ports and the measures being taken to help alleviate them.

I am absolutely convinced I have the smartest readers in the world when it comes to the Bakken. My blog may not be very wide -- it's a very, very narrow subject -- the Bakken -- essentially four counties in western North Dakota -- but it's very, very deep. And the readers are paying attention. I'm impressed.

The other day I posted about the shortest post possible. I was somewhat embarrassed that it was so short, but I was pressed for time. More on that later.

This is a screenshot of the post from the sidebar of posts that are trending. Again, this was the #1 trending post.

Posted by Bruce Oksol at 9:04 PM No comments:

New York Denies Pipeline -- May 15, 2019 -- Most Interesting Story Coming Out Of The Northeast This Year 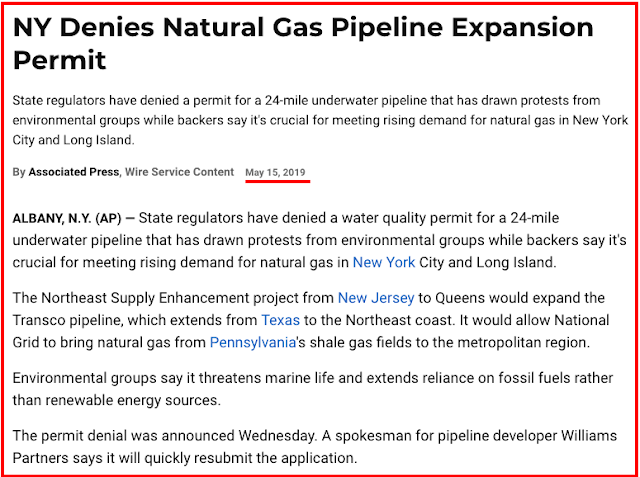 My hunch: moratorium on new hook-ups for Westchester County, NYC, Long Island -- I give the regulators two months to sort this out. This is no longer about natural gas or the environment. It's about a) elitism; b) anarchy; c) no-growth [Occasional-Cortex can explain].

Huge thanks again to a reader for bringing this to my attention.

This may be the most interesting energy story coming out of the northeast this year.

This was the backstory, posted yesterday:

Actually it sounds like -- according to the article -- even without any growth, the National Grid natural gas supply is already stretched to its limits during the winter.

My hunch: they will find a way to thread the needle.

Likely solution: "forbid" National Grid from any moratorium on hookups but approve no new pipeline permit, waiting to see what this next winter brings. Seems crazy but kicking the can down the road has worked since 2013. If nothing else, the "May 15th" deadline will be extended, as the"parties remain talking."

Note the third point made by a "global warming" proponent: part of the current problem is due to "more heating needs as climate change brings more extremely cold winter days." 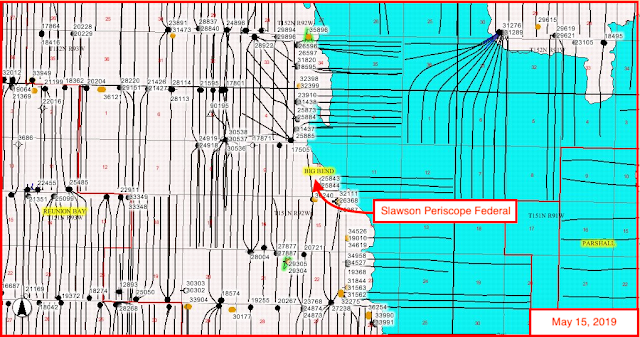 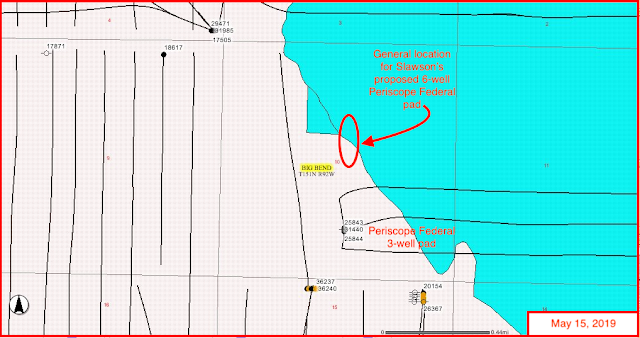 Two-thousand, six hundred, sixty-five (2,665) wells will be about the number of new wells North Dakota will drill over the next three years.
Posted by Bruce Oksol at 2:29 PM No comments: 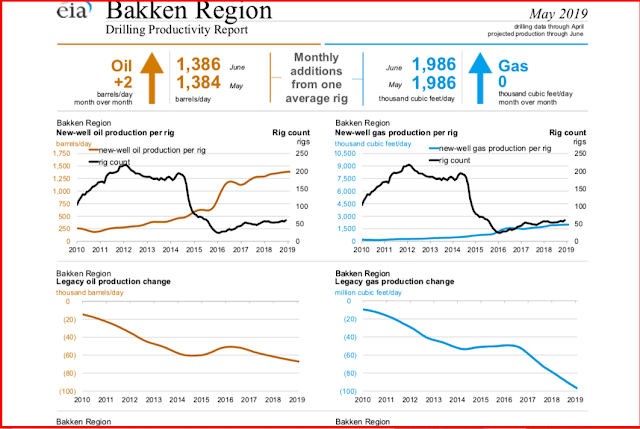 Similar to Eagle Ford, except the Eagle Ford is much gassier; completely "swamps" the Permian.
Posted by Bruce Oksol at 1:54 PM No comments:

An Unexplained Jump In Production Of A Whiting Flatland Federal Well -- May 15, 2019

Note: always be careful with any of my postings. I am inappropriately exuberant about the Bakken. I sometimes see things that don't exist in the Bakken. This is another example. There's always possible there's a typographical error at the source, or an explanation that I have  not found, but here's another example of a jump in production with no obvious explanation. The mom-and-pop mineral owners probably don't really care -- they just appreciate their royalty checks.  The jump in production (see below) was not a full 30-days.

See this Flatland Federal posting for background. FracFocus is "down" right now so I cannot check recent frack data, but there is no sundry form suggesting a recent frack at this well.

All stories that have been followed on the blog. 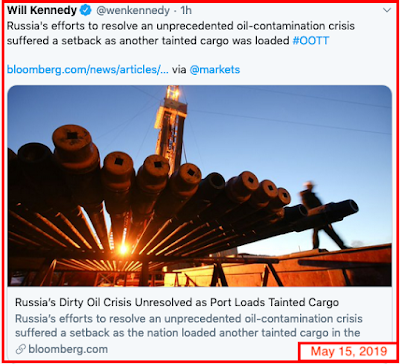 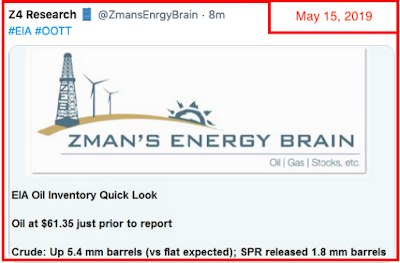 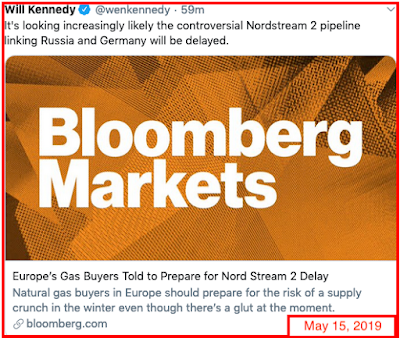 Later, 9:18 p.m. Central Time: see first comment. A reader disagreed with my suggestion that the long pole in the tent would be export terminals along the Gulf Coast. See this post with additional data suggesting why the reader is correct; I was wrong.

EIA tracks US crude oil and petroleum products exports here but the data is almost three months old. Here it is May 15, 2019, and the recent EIA data for US crude oil exports is February, 2019.

In very round numbers, the US has been exporting 8.1 million bopd since October 2018.

There are actually two EIA charts:
I'll have to wait for the twitter folks to sort this out, but it appears in round numbers:
Rigzone provided a nice update regarding US production, refining capacity, exports at this link on January 17, 2019. Some data points:
Ah, yes, right on time, the twitter folks come through with the synopsis of where we stand:
No, the world won't have a supply problem in 2H19 if Rigzone is correct. The long pole in the tent will be export terminals off the Gulf Coast. Rigzone says the capacity if about 2 million bopd now, and might get to 5 million bopd in five years.

But the numbers are interesting. Saudi Arabia is producing about 10 million bopd and exporting about half that.
Posted by Bruce Oksol at 10:23 AM 2 comments:

It would be interesting to see the "target" for US storage of crude oil that Exxon, Chevron, COP, etc, are setting internally. In other words, anticipating exports in 2020, how much storage does the US need, based on estimates by the oil companies and/or the EIA?

Storage at Cushing is apparently no longer an issue and most new storage has been put in along the US gulf coast. When storage got "tight" in Cushing many years ago there were many, many stories on storage issues. However, I haven't seen similar stories now, and I wonder how much excess storage exists.

It seems the EIA weekly petroleum report could:


a) provide storage capacity; and,
b) post the amount of US crude oil exported the previous week; they provide the "import" data, but not the "export" data?

The EIA weekly petroleum report still reflects the way the US was before the shale revolution.