Originally there were nine wells in this one-mile stretch. Now, May 27, 2021, no less than sixteen locations/wells. To the original list below, add:

Email ThisBlogThis!Share to TwitterShare to FacebookShare to Pinterest
Labels: Follow_Up_24


DOE’s optimistic future supply forecasts are dangerously unrealistic, James S. Baldauf, president and cofounder of ASPO-USA, told reporters during an Oct. 26 press conference in front of DOE’s headquarters. “If these exuberant predictions are wrong, the consequences could be catastrophic. We need to be conservative in planning for the future,” he said. “We are not running out of oil. But we appear to be running out of oil that we can afford.”

The US Department of Defense’s Joint Operating Command said in its biennial report that a world oil supply shortfall would pose a serious challenge to military preparedness, he said in an e-mail to OGJ. “They have said that as soon as 2012, total world oil production will begin to decline, and that there could be a 10 million bbl/day shortage by 2015,” he indicated.

Memo to self: remind me to look at this report in December, 2024.

Remember, it was the US Navy paying $26/gallon for algae-derived fuel, or something like that. 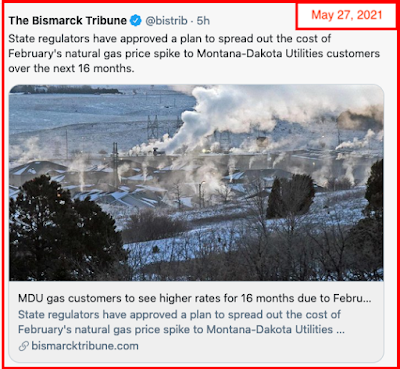 I don't know if folks are paying attention, but things have changed, things are starting to "break" right for Saudi Arabia:

I don't recall the specifics (and it may be apocryphal) but it seems I recall Ronald Reagan saying the US could outspend Russia when taunting the latter during "Star Wars."

One now wonders, with Biden's proposed $6 trillion budget, if the US economy could literally dwarf/drown the EU? My hunch: European leaders are watching "this stuff" closely.

It would be nice to see a breakdown of the $6 trillion and compare it to the current budget.

Email ThisBlogThis!Share to TwitterShare to FacebookShare to Pinterest
Labels: Cryptocurrency

Posted by Bruce Oksol at 8:51 PM No comments:

Lowest number of vaccinations administered for a Thursday report, going back to February 18, 2021 (last column / column 6).

It was reported that only 1.5 million vaccinations were give in the most recent Thursday, 24-hour report.

The highest for a Thursday was April 15, 3.5 million vaccinations given. After that, continued decrease. Note: the "JNJ pause" was announced April 13, 2021.

The Río de la Plata, literally, "river of silver"), called River Plate in British English and the Commonwealth and La Plata River (occasionally Plata River) in other English-speaking countries, is the estuary formed by the confluence of the Uruguay River and the Paraná River at Punta Gorda.

It empties into the Atlantic Ocean and forms a funnel-shaped indentation on the southeastern coastline of South America. Depending on the geographer, the Río de la Plata may be considered a river, an estuary, a gulf, or a marginal sea.

It forms part of the border between Argentina and Uruguay, with the major ports and capital cities of Buenos Aires and Montevideo on its western and northern shores, respectively.

The historical English name "River Plate" uses an obsolete sense of the word "plate", which was used extensively as a term for "silver" or "gold" from the 12th century onwards, especially in Early Modern English.

There is a rig on site in the field, but it is drilling a SWD well.

It certainly appears the daughter wells permitted in 2018 will be as good or better than the parent well. Whoo-hoo. 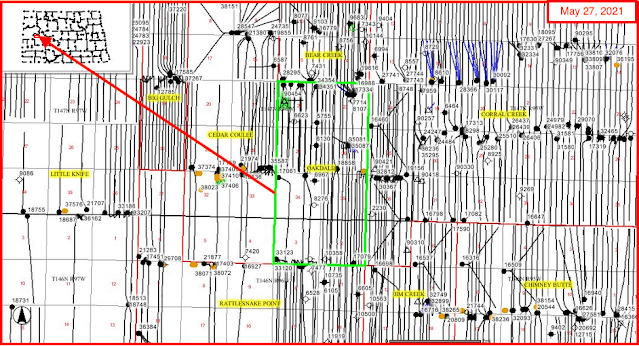 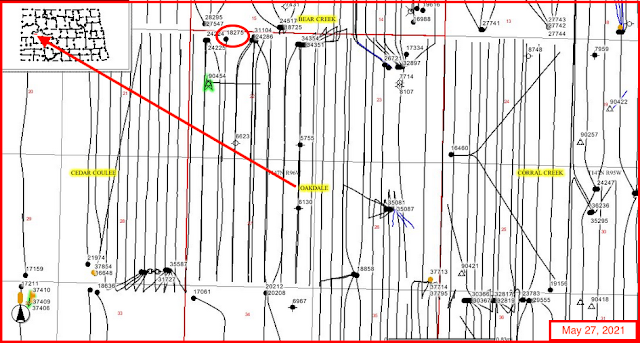 Points on a compass: quick, how many points are there on a compass? From allormore/fandom, there are anywhere from four to thirty-two points depending on the compass:

The points of the compass are points on a compass, specifically on the compass rose, marking divisions of the four cardinal directions: North, South, East, West.

The number of points may be only the 4 cardinal points, or the 8 principal points adding the intercardinal (or ordinal) directions northeast (NE), southeast (SE), southwest (SW), and northwest (NW). For nice definition and description, see this link.

In metereological usage further intermediate points are added to give the sixteen points of a wind compass.

Finally, at the most complete in European tradition, are found the full thirty-two points of the mariner's compass.

But in ancient China 24 points of the compass were used.

The mariner's practice of boxing the compass is the action of naming all thirty-two points of the compass in order clockwise.

The names of intermediate points are formed by the initials of the cardinal directions and their intermediate ordinal directions, and are very handy to refer to a heading (or course or azimuth) in a general or colloquial fashion, without having to resort to computing or recalling degrees.

For most applications, the minor points have been superseded by degrees measured clockwise from North.

While sailing from the Strait of Gibraltar, "every point of the compass threatened a wild storm. My attention was turned to reefing sails ... and I was glad to head the sloop three points or more away from her true course that she might ride safely over the waves."

So, if Joshua Slocum was using the traditional European mariner's compass, his device had 32 points, or 11.25 degrees between points.

The names of the points as well as the degrees are at the link above.

It's interesting to compare the points on a compass with the divisions on a clock and one wonders why the Europeans did not use the divisions of a 12-hour / 24-hour timepiece. If one compares the two, one quickly sees the difference but having said that, the Chinese, with twenty-four points on their compass would have / could have incorporated their 12-hour / 24-hour timepiece with a compass. Fascinating. I know nothing about these things, so another subject Sophia and I will have to learn together.

No Wells Coming Off The Confidential List; Bakken Production Forecast To Decline Later This Summer -- May 27, 2021

Active rigs down one from yesterday; MRO with one less active rig today. CLR still with seven active rigs (one drilling a SWD well).

It’s not often these days that you read about gas markets in the San Juan Basin. In fact, the subject was probably never much of a hot topic because the San Juan has been something of an afterthought when it comes to Western gas markets, just a stop on the road between the Permian and markets along the West Coast and in the Rockies. However, those Western gas markets are setting up to be quite interesting this summer, as is the Waha gas market in the Permian, and understanding the mechanics of the San Juan is just one piece of the overall Western puzzle. In today’s blog, we take a look at the far-flung but increasingly interesting markets west of the Permian Basin.

Jobless report: they've been posted. The actual numbers don't matter (we've discussed this before). But how did the Dow react. Just minutes before the number same out, Dow futures were up 75 points; as the numbers came out the Dow futures moved to 120 points on the upside. Prior to the numbers coming out, both the S&P 500 and the NASDAQ were in the red. Following the release of the data, S&P turned slightly positive (essentially flat) while the NASDAQ remained red, about 45 points down.  7:35 a.m. CT; numbers were released at 7:30 a.m. CT.

The usual disclaimer applies: there may be typographical and content errors in all my posts. If this is important to you, go to the source.

It was noted yesterday that CLR has a sixth rig (?) in the Bakken, bringing a rig into the Long Creek Unit.

The rig is "assigned" to this well: 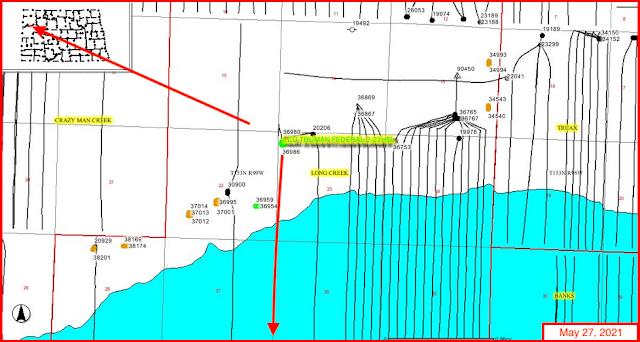