The EOG Riverview wells in Clarks Creek are tracked here.

The CLR Pasadena / Pasadena Federal wells have been updated. Three new sites show up at PNC on the scout tickets but are in fact being drilled. One Pasadena well has a rig on site.

Another reminder: keep your gas tanks full. Service stations are going to be running out of fuel by Monday, July 5, 2021.

Well, that was helpful. Not.

If we need anything of consequence (more than beer and bread) we need to drive fourteen miles north to Kalispell, and another three miles through the town to get to the big box stores on the north side.

The UPS trucks makes a regular tour through our housing area every night dropping off what we need.

And that folks, is a match made in heaven.

Tonight I ordered non-perishable staples for the folks at the "family home." The supplies will arrive in a couple of days. No one out there knows this stuff is coming, but they will appreciate it when it arrives.

For readers, I have returned to north Texas after a long week on Flathead Lake, but I will be returning to Lakeside, Montana, in late July for a longer stay this time. 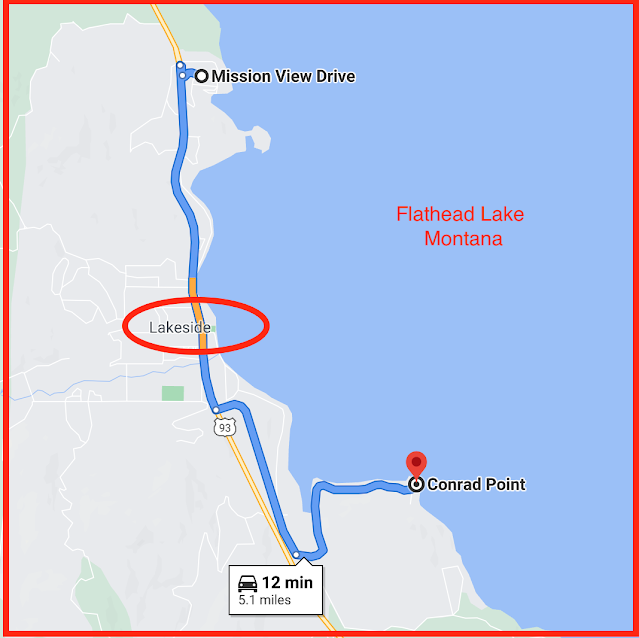 SpaceX: say what you want about Elon Musk, there's not many folks who could do this -- SpaceX launches 88 satellites into orbit and nails the rocket landing. Link here. Is it just me, but do these satellites simply seem like "drones" in space?

Who owns the Fourth of July? Op-ed in The WSJ.

Let it also not pass unnoticed that while much of the country stayed home as ordered, workers in hospitals, supermarkets, drugstores, factories, distribution centers and other places awoke each day, went to their jobs and kept the country afloat, oblivious to the political obsessions of their at-home fellow citizens.

Another notable source of stability, largely missed by a media focused on Covid and racism, was that for much of the pandemic’s year, most of the nation’s religious, private and many charter schools heroically stayed open while public-school unions refused to let their members teach.

[Unless I missed it, the writer of this op-ed failed to mention military personnel.]

Duolingo: Sophia and I have 286 consecutive days -- have not missed one day since starting -- of a Duolingo Spanish lesson. Slowly but surely.

Posted by Bruce Oksol at 6:36 PM No comments: 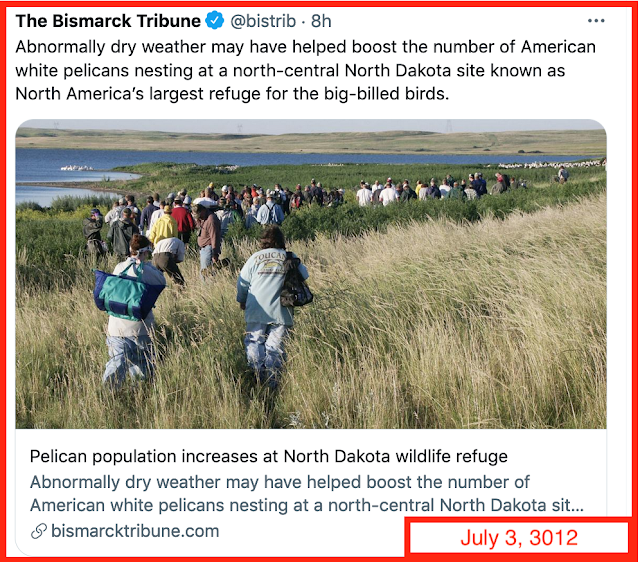 McKenzie County skippers. Link to The Bismarck Tribune. McKenzie County home to a near-endangered butterfly, the skipper. If blocked by the paywall or if you want to avoid the ads, click on this link, and then just add one more note: environmentalists seek to get this nondescript insect on the endangered list. The little-known butterfly makes its home in McKenzie County. Yes, you can see where this is headed.

About half their 16,000 members live on the Fort Berthold Indian Reservation atop one of the biggest U.S. oil discoveries in decades, North Dakota’s Bakken shale formation.

The drilling rush has brought the tribes unimagined wealth -- more than $1.5 billion and counting -- and they hope it will last another 20 to 25 years. The boom also propelled an almost tenfold spike in oil production from Native American lands since 2009, federal data shows, complicating efforts by President Joe Biden to curb carbon emissions.

Burning of oil from tribal lands overseen by the U.S. government now produces greenhouse gases equivalent to about 12 million vehicles a year, according to an Associated Press analysis. But Biden exempted Native American lands from a suspension of new oil and gas leases on government-managed land in deference to tribes’ sovereign status.

Three tweets from the "GasBuddyGuy" today -- a huge reminder: if you have not already filled your gas tank this might be a good time to do that. I think most prudent folks would not let their tanks fall below half full.

Posted by Bruce Oksol at 4:19 PM No comments:

July 4, 2021: now that folks  have had a chance to look at the presentation, my thoughts regarding COP's plans for the Bakken. Not ready for prime-time (this has updated/corrected based on information from a reader):

If we are interpreting the slides correctly, COP says it has an inventory of 500 "new" operated wells in the Bakken. That means COP has an average of one well one each of its drilling units. Much (most) of COP's Bakken acreage is Tier 1.

Tier 1 Bakken acreage will easily support eight wells / 1280-acre unit and very likely could support as many as twenty-four wells.

Later, 4:03 p.m.: for regular readers of the blog and/or for those who feel they have a good understanding of the Bakken. Look at the "inventory" numbers COP provides for the Bakken. Any thoughts? I'll provide mine later but this is quite fascinating -- as everything about the Bakken is fascinating.

I assume this slide deck was put together after COP acquired Concho, probably prepared to provide analysts and investors COP's ten-year plan with the acquisition of Concho.

Ed Yong has an interesting article in The Atlantic. First noted in this tweet: 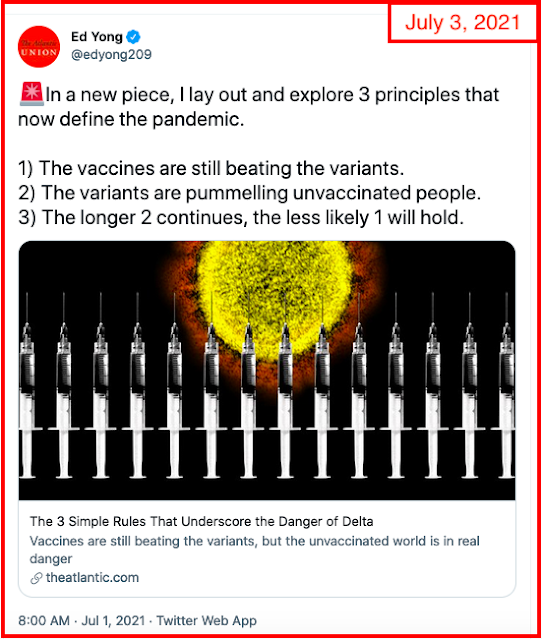 The link to The Atlantic article.

Estates: older Americans stockpiled a record $35 trillion. Link to The WSJ. Some data points (although I thought the article was pretty lame); some numbers rounded:

Travel: a look at the big differences in the three units of the TR National Park. Link here. Quick! Name the three units and where they are located in relation to each other.

In her earlier days, some seven years earlier (https://www.youtube.com/watch?v=5neyFA5rM5w):

I can't remember if I posted this before. This comes from a reader.

Take Michael Jordan.
Take Tom Brady.
Take Wayne Gretsky.
Take Sugar Ray Robinson.
Take Pele or Maradona.
Take Dale Earnhardt or Richard Petty.
Take Tiger Woods or Jack Nicklaus.
Yes, take The Babe.
While there will be endless debates/quibbles about different candidates/statistics/positional aspects, the above named athletes will - unarguably - be on every single comparative listing when the Greatest Of All Time athletes are discussed.

(Informed observers ought not even question Jim Thorpe as being the Greatest All Around due to, if nothing else, both his versatility and overcoming of hardships. Name One. Single. Athlete today who could win 2 Olympic gold medals wearing discarded shoes of two different sizes - neither of which matched Thorpe's).
However, using one single metric, I would think it indisputable that Katie Lececky is not merely the best swimmer to ever don a pair of goggles, she is the Greatest Of All Time athlete as she does not merely beat her rivals year after year, she CRUSHES them ... all world class athletes themselves.
Think Petty winning his races by a full lap for 10 years running.

Sugar Ray knocking out everyone in the first round.

Tiger or the Bear leading every single round in every tournament for a straight decade.

The Babe hitting 60 home runs with a .400 batting average for several  years straight.
This is the proven track record of Katie Ledecky in her not only winning virtually every race for a solid decade now, she has destroyed her competition consistently race after race.

Starting out as a 15 year old in the 2012 Olympics, she not only won the gold, she beat the runnerup by 4 full seconds.

(For context, yesterday's women 200 IM had 4 one hundredths of a second - .04 seconds - separate the first, second, and third place finishers).
No doubt whatsoever ...

The world has NEVER seen, and may never again witness, an athlete that has so dominated a sport for so long a time as Ms. Katie Ledecky has. Her overdue recognition ought to be acknowledged and applauded in the most widely spread fashion starting right now.