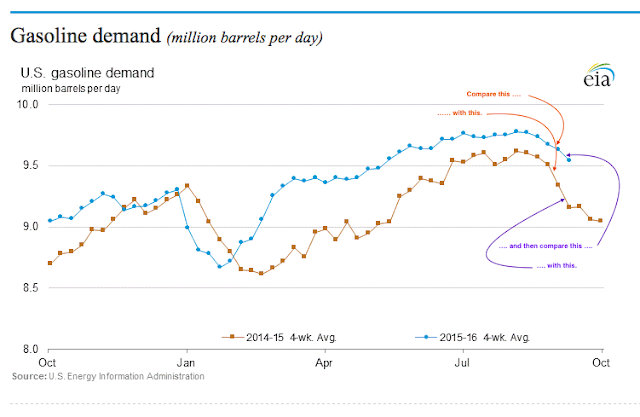 
Recap:
This chapter:
Initial:
Execution of plans:
Bottom line:
Posted by Bruce Oksol at 7:43 AM No comments:

AAPL: It's been a wild week for the world's biggest stock. Apple shares surged 3.5 percent Wednesday — after rising 2.4 percent Tuesday — and climbing 2.2 percent on Monday. Over the past three sessions, the company has added some $50 billion in market capitalization. The reason: their iPhones do not explode.


Net crude oil imports to the U.S. Gulf Coast in 2016 have been running well above the pace set last year, the increase driven by a combination of lower U.S. crude oil production, rising import levels and relatively flat export volumes. The trend toward higher net imports –– an outgrowth of the end of the ban on U.S. crude exports –– is significant in that it affects oil inventories and oil prices. What’s driving this trend, and how soon might net imports peak? Today, we survey recent developments on the crude oil import/export front, with a focus on the Gulf Coast.

Crude oil traders and the audience at the U.S. Open in Flushing Meadows, NY had one thing in common recently: their heads have been whirling, side to side and up and down. In the case of crude oil traders this was due to a sharp drop in imports in the week ending September 2, followed by a sharp rise the following week. The rollercoaster was caused primarily by the coincidence of three factors: a hurricane preventing discharges at Chevron's Pascagoula, MS refinery and disrupting offloading at the Louisiana Offshore Oil Port; the Labor Day holiday slowing operations elsewhere; and the decision by importers in Texas to reduce their intake of imported barrels ahead of the ad valorem tax assessment on September 1. Soon after tax day, the crude came flooding back in.

Refiners typically would be expected to take in less crude oil in September ahead of maintenance season in the fall. So far, this is not panning out. Waterborne imports in the first 12 days of September are at 3.24 MMb/d, compared to 3.22 MMb/d in August. Based on the number of vessels currently sailing toward the U.S. Gulf Coast, we expect the week ending September 16 to see a dip in imports, followed by a rebound in the week ending September 23, and an equally strong showing in the final week of September. Looking at the entire month, we expect September to show imports about 500 Mb/d higher than in the same month of 2015. This is a wider gap than the 300-Mb/d excess of August 2016 over August 2015. So, if there is to be an inflection point suggesting lower imports, it doesn’t appear likely to happen in September.

The most important short-term driver for the swings in import levels is shipments from the Middle East Gulf. (Latin American deliveries can swing widely over a few days but quickly revert to a mean.) Middle East producers prize the U.S. market, in part because it remains the largest consumer of oil in the world, and they have kept their prices for U.S. buyers low. Flows from the Middle East have stayed correspondingly high. Looking beyond September, there appears to be enough Middle Eastern oil on the water expected to arrive along the U.S. Gulf Coast in October to hold imports near 1.1 MMb/d for that month. This is in line with August and September levels. So again, there’s no inflection point on the horizon.

Maybe there wasn't enough to buy: manufacturing output in US fell in August.

Benghazi: Colin Powell says, in e-mail to Condi Rice, that the Benghazi congressional hearings were a witch hunt. Rice said she agreed.

Most valuable sports franchise: Dallas Cowboys, $4 billion. In 1989, the current owner paid $140 million for the franchise.

Grisly. Water runs red. I was witness to similar "atrocities" when stationed in Turkey.

The story in today's WSJ graphically shows how bad things have gotten under the Obama administration.

The Journal looked at income gains/losses among states, comparing 2015 income with income in 2008. It's hard to say whether the 2008 figures were pre-recession / post-recession. The recession hit full-force in 2009.

The Journal looked at 13 states -- chosen because they are politically important this year. Of the thirteen only three showed any income increase over the past decade, and the gains were minimal:
My hunch: expenses over the past decade grew a lot faster than 2% for those folks.
Now the really bad news, the ten states who saw their incomes actually decrease:
Earlier in the week, the Journal reported equally bad news with an upbeat headline:
So, everyone is excited that US household income is surging -- and yet it is 2.4% below that of 1999.

Two lost decades. The first under George Bush. The second under Barack Obama.

However, that wasn't the big story. The big story was the "haves" vs the "have-nots." Some states are doing well; others are in deep, deep trouble. 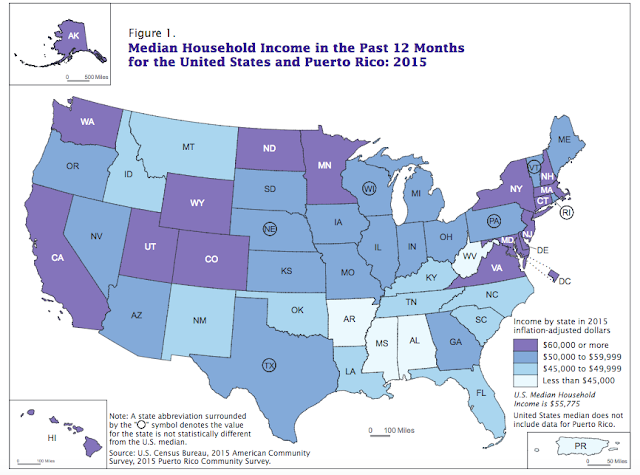