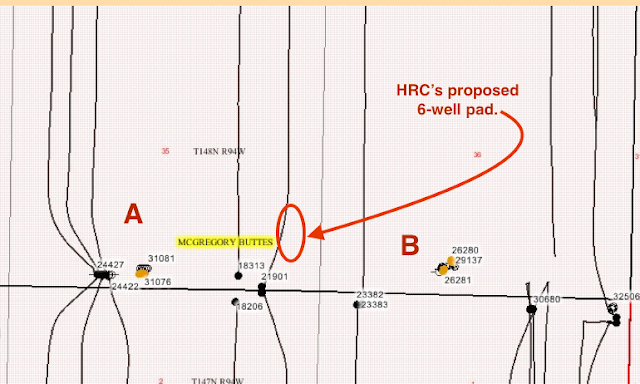 Zoom in on area A:

Zoom in on area B: 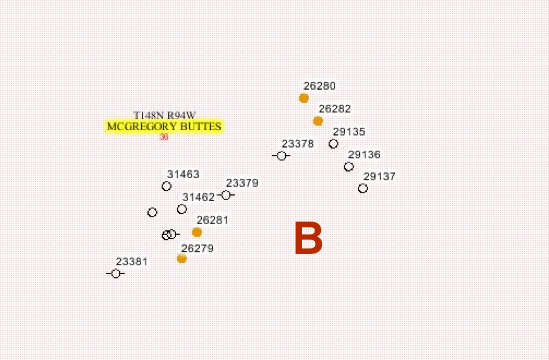 North Dakota's Geological Survey major publication comes out twice a year: Geo News. At the link, simply scroll down and pick out the issue you want to visit, all the way back to 1974. It's all free; no password needed.

The January, 2016, issue has a nice article on salt water disposal wells in North Dakota.

The US has never had a week in which gasoline demand averaged greater than 10 million bopd. 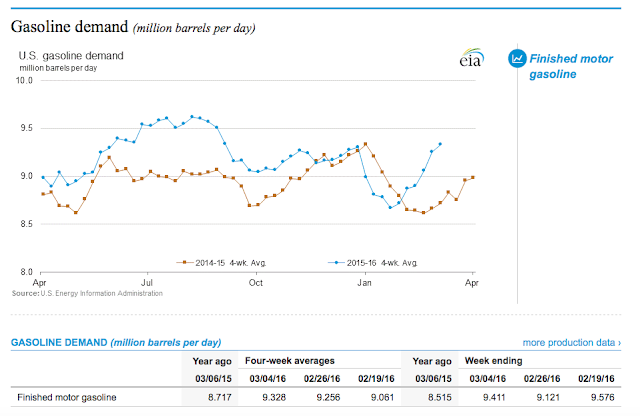 
A court issued an unprecedented order Wednesday for a nuclear reactor near Kyoto to stop operating and ordered a second one to stay offline.

The Otsu District Court, which issued the injunction, said the emergency response plans and equipment designs at the two reactors have not been sufficiently upgraded after the 2011 Fukushima nuclear disaster.

The order requires Kansai Electric Power Co. to shut down the No. 3 reactor and keep the No. 4 unit offline at the Takahama plant in Fukui prefecture in western Japan, home to about a dozen reactors.

The two reactors restarted this year after a high court in December reversed an earlier injunction by another court. The No. 3 reactor, which uses a riskier plutonium-based MOX fuel, resumed operation in late January, while the No. 4 reactor had to be shut down late last month after operating for just three days because of a series of technical problems.

Kansai Electric said it would abide by the decision and start the shutdown procedures for the No. 3 reactor Thursday morning. The utility, meanwhile, said that the decision was "disappointing" and that it planned to appeal.

The decision reflects Japan's divisive views on nuclear safety and leaves only two of the country's 43 reactors in operation.

Then the extent of quantitative easing in Europe will lead to strong dollar will lead to currency fluctuations and US exports falling.

Profit taking after recent 5-day run in the bull market.

At least that's my take.

Email ThisBlogThis!Share to TwitterShare to FacebookShare to Pinterest
Labels: JapanNuclearReactor

Iditarod update -- North Dakota musher jumps to seventh (this morning he shows up at #6). The Dickinson Press is reporting:


Back in seventh place Wednesday after overcoming sled breakages, North Dakota native Kelly Maixner will re-evaluate his team after passing through the McGrath and Ophir checkpoints — and may soon be opting to take his mandatory 24-hour rest in the 2016 Iditarod.

Maixner told a television crew his dogs were doing “awesome,” but that something on his sled seemed to break during every run.

Maixner, a pediatric dentist who grew up near Beach, has been plagued with equipment problems this week. He was listed in seventh place Wednesday morning, according to the official Iditarod website. Tuesday, he was in 26th place.Currently there are 81 mushers in the race; the race started with 85.

Heartwarming story of the day making the rounds in local talk radio: link here. Story and video at the link.

March 10, 2016: current polls show Rubio will be a Reuben sandwich in Florida; Kasich will krimp Trump's style in Ohio. Camille Paglia says she was wrong about Trump.


RBN Energy: EIA’s March 2016 DPR Natural Gas Revisions Defy Previous Production Declines. We will come back to this -- this is quite startling.

Geopolitical article for the day: "End Times for the Caliphate?", Patrick Cockburn, London Review of Books, March 3, 2016. See below, some preliminary notes.

It's going to b a busy day.


The number of Americans filing for unemployment benefits fell more than expected last week, hitting its lowest level since October, pointing to sustained strength in the labor market that should further dispel fears of a recession.

Initial claims for state unemployment benefits declined 18,000 to a seasonally adjusted 259,000 for the week ended March 5, the lowest reading since mid-October, the Labor Department said on Thursday. The prior week's claims were revised to show 1,000 fewer applications received than previously reported.

Economists polled by Reuters had forecast claims slipping to 275,000 in the latest week. A Labor Department analyst said there were no special factors influencing last week's claims data and no states had been estimated.

The four-week moving average of claims, considered a better measure of labor market trends as it irons out week-to-week volatility, fell 2,500 to 267,500 last week, the lowest level since late October.

How did the market react? Prior to the release of this data, the opening was forecast to be "higher." After the release of the jobs data, futures are now (7:56 a.m. Central Time): +140 points. And oil stable. [Maybe not: now that the market has had time to digest jobs report, futures up only 70 points and falling quickly. This gives the Fed an opportunity react. Janet must be asking, "If not now, when?"

A single swallow does not a spring make.

The war in Syria and in Iraq have produced two new de facto states in the last five years and enabled a third quasi-state greatly to expand its territory and power.

The two new states are two separate Kurdish states, one to the west (Syria) and one to the east (Iraq). Neither are recognized internationally but they are stronger militarily and politically than most members of the UN.

Both states are very, very small in population.

The three states:
For me, this is how I will keep track of them:
The three states -- origin and geography:
The question as discussed by Cockburn: will any of these "states" persist after the current conflict is over.

Cockburn gives short shrift to ISIS: "The Islamic State is likely to be destroyed eventually ... though its adherents will remain a force in Iraq, Syria, and the rest of the Islamic world.