What NYC And Others Will Be Talking About Wednesday -- December 14, 2015


It has been announced that Howard Stern signed a new five-year deal with Sirius XM  which includes a 12-year deal giving Sirius XM rights to video and audio material from Stern's 30-year radio career and a plan "to launch its first venture into video programming with Howard."

I was pretty sure he would go video; I wish I had said that below, although as he ages, I thought he might not want to be on video, but his past shows can easily go into syndication.


Original Post
Where oh where will Howard go? Or will he stay? Bloomberg is reporting that we should know in less than 48 hours:


On the morning of Wednesday, December 16, 2015, Stern will host his final show under a five-year contract with SiriusXM. What he will do next remains a mystery. He could walk away from the medium, as he once did from broadcast, to try his hand at, say, Internet radio.

During his show last week, Stern told listeners he hasn't made up his mind. If past is precedent, he will probably reveal his next move on the air in the coming days. There's a lot of money riding on the decision.

My hunch: $100 million minimum  to stay another year.


General Motors said it has "anecdotal evidence" that CarPlay, available in over two dozen 2016 Buick, Cadillac, Chevrolet and GMC models, is helping sell new vehicles to customers, according to The Wall Street Journal. A pair of GM dealers confirmed CarPlay is "helping to close the deal" on purchases.

This is from the EIA:


The EIA continues to expand its assessment of technically recoverable shale oil and shale natural gas resources around the world.

The addition of four countries—Chad, Kazakhstan, Oman, and the United Arab Emirates (UAE)—to a previous assessment covering 42 countries has resulted in a 13% increase in the global assessed total resource estimate for shale oil and a 4% increase for shale gas.

A total of 26 formations within 11 basins were analyzed in these 4 countries. Of the eleven basins, one is the Williston Basin.

Again, from tight oil, the United States accounts for more than 90% of global tight oil and most of that comes from three plays: the Permian, the Eagle Ford, and the Bakken.
Posted by Bruce Oksol at 10:29 PM No comments:

On December 10, 2015, I expressed my opinion that the number of wells waiting to be fracked seemed "odd." I had expected the number to increase, at least slightly, and probably significantly month-over-month (September to October). In fact, the Director's Cut suggested the fracklog had decreased but the "math" was not "correct."


The overwhelming drama of Giuliani's first televised statements — which segued into round-the-clock news conferences and a constant physical presence in the wounded city by Guiliani, then-Gov. George Pataki and, occasionally, President George W. Bush — contrasted with the underwhelming response 11 days ago to the terrorist attack in San Bernardino.

Local officials arrived promptly, aided by geography. Gov. Jerry Brown showed up only briefly before heading to Paris for the international conference on climate change. President Obama has yet to visit, though his spokesman would not rule out a trip before his Hawaii vacation begins at the end of this week. Obama did deliver Oval Office remarks on the shooting, which appeared to do little to calm nerves. 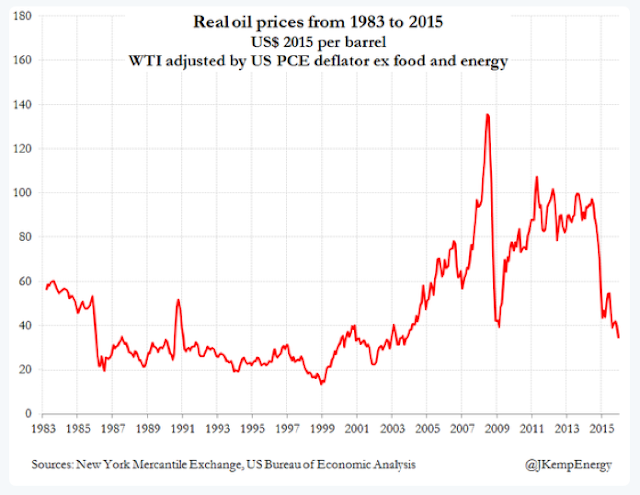 Interesting graph, huh? This goes back all the way to 1983 so one can't say Kemp cherry-picked the time period. It almost appears the period between 2004, or maybe even as late as 2005, and 2014 was an anomaly or an outlier, and that the "true" price for oil runs between $20 and $40 per bbl. In hindsight, something happened in 2005 - 2007 that operators drilling for conventional oil allowed the price to spike and give operators working unconventional oil fields an opportunity. I don't know but it is an interesting graph.

Now, about that "something happened in 2005 - 2007." In fact, more specifically it was Brookings Papers on Economic Activity, Spring 2009, that provides a study of the "Causes and Consequences of the Oil Shock of 2007 - 2008," out of the University of California, San Diego.


This paper explores similarities and differences between the run-up of oil prices in 2007–08 and earlier oil price shocks, looking at what caused these price increases and what effects they had on the economy.

Whereas previous oil price shocks were primarily caused by physical disruptions of supply, the price run-up of 2007–08 was caused by strong demand confronting stagnating world production. Although the causes were different, the consequences for the economy appear to have been similar to those observed in earlier episodes, with significant effects on consumption spending and purchases of domestic automobiles in particular. Absent those declines, it is unlikely that the period 2007Q4–2008Q3 would have been characterized as one of recession for the United States. This episode should thus be added to the list of U.S. recessions to which oil prices appear to have made a material contribution.

Although the article tends to emphasize the consequences, reading between the lines confirms what the blog has pointed out numerous times with regard to Saudi Arabia's ability to increase production when necessary. According to wiki, this is the mission of OPEC:


OPEC's mission is "to coordinate and unify the petroleum policies of its member countries and ensure the stabilization of oil markets, in order to secure an efficient, economic and regular supply of petroleum to consumers, a steady income to producers, and a fair return on capital for those investing in the petroleum industry."

The weekend was incredible. The Christmas issue (or was it the "holiday") issue of The New York Review of Books arrived; and the Friday and Saturday issues of The Wall Street Journal with "Arena" and "Review" were available. More than enough to keep me busy during spare moments between family events with out-of-town company all weekend.

From "Arena," The WSJ, "The Coming Shakespeare Extravaganza: The 400th Anniversary of Shakespeare's death next year is sparking an explosion in books, tours, and spinoff, none of which I will be interested in except for an occasional book, perhaps. But I am just getting back into another one of my "Shakespeare phases" and 2016 may be a good year to reading more of Shakespeare. That should keep me busy.


So far, more than 140 Shakespeare-related titles are listed for next year on Amazon.com, including more than 40 in April alone. (The anniversary date is April 23.) “Can you imagine the table at Barnes & Noble ?” said Jonathan Galassi, president and publisher of Farrar, Straus and Giroux, which will release two nonfiction books on Shakespeare next year.

The first, Edward Wilson-Lee’s “Shakespeare in Swahililand,” looks at the impact of the Bard’s works in eastern and central Africa. A second as-yet-untitled entry, by Elaine Scarry, theorizes that Shakespeare’s sonnets were written to another poet—who wrote poems back to him.

The new books come in addition to an already voluminous body of work on the Bard. WorldCat, an online catalog encompassing the collections of some 70,000 libraries in more than 150 countries, lists 182,000 books related to Shakespeare.

Hey, by the way, it is said no other person has more books written about him than Shakespeare (Jesus Christ might be an exception. But answer me this: "Who has probably been the subject of more books than any other American, Lincoln excepted?" The answer will come later.

Among the many articles not related to books or reading was an essay in Saturday's WSJ "Arena," by Daniel Kessler on "The Health of Obamacare." [I remember the first time I used "ObamaCare" in place of the official title of the act and a reader wrote to tell me it was irresponsible of me to call it that, demeaning a very, very act/law. Whatever. Now "everyone" calls it "ObamaCare."]


More than five years ago, the Affordable Care Act—what most of us call Obamacare—was passed into law with two big declared goals: to reduce the number of Americans who lack health insurance and to cut health spending that doesn’t give good value for money. Has the law been a success? The country is sharply divided. The most recent Gallup and Kaiser Family Foundation tracking polls show public opinion almost evenly split, with Democrats largely supporting the law and Republicans opposing it. This partisan divide in public opinion has changed little since 2009, when President Barack Obama won a narrow victory in Congress for his signature domestic legislation.

Some data points from the essay / op-ed (I am going through this for the first time; I have not read it yet; I do not know how Kessler stands on ObamaCare, although seeing it in the WSJ provides a  hint:
The downside:
And then the author concludes: more is necessary; the question is who will be brave enough to confront difficult policy problems that we still face.

Oh, yes, the answer to the question, the most written about American, Lincoln excepted? George Armstrong Custer.
Posted by Bruce Oksol at 9:39 AM No comments: