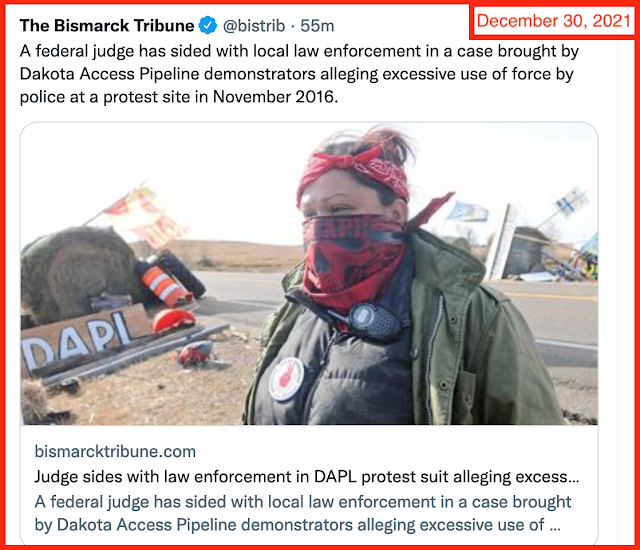 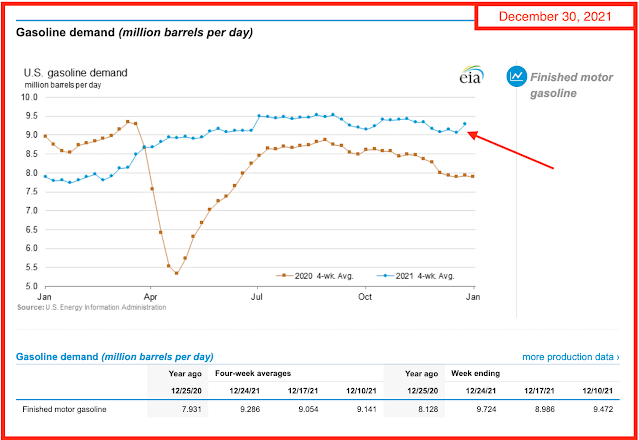 I'm not sure whom to thank, ET or WMB? 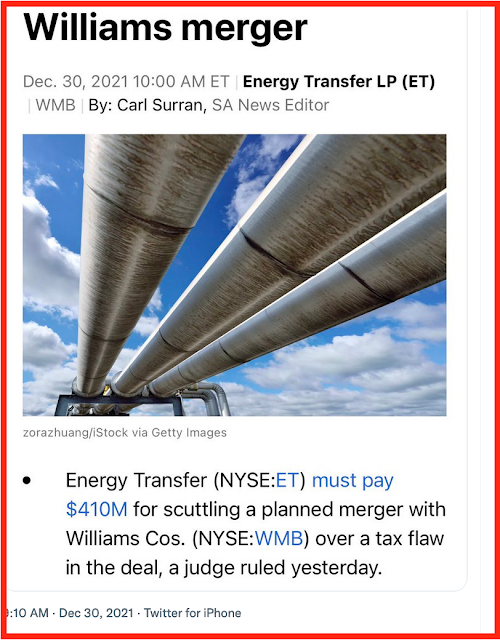 WMB is flat today. Has had a huge year.

US Sets A New Record -- Number Of New Coronavirus Cases In US Sets All-Time High -- Most Vaccinated And Tested Population In The World -- December 30, 2021 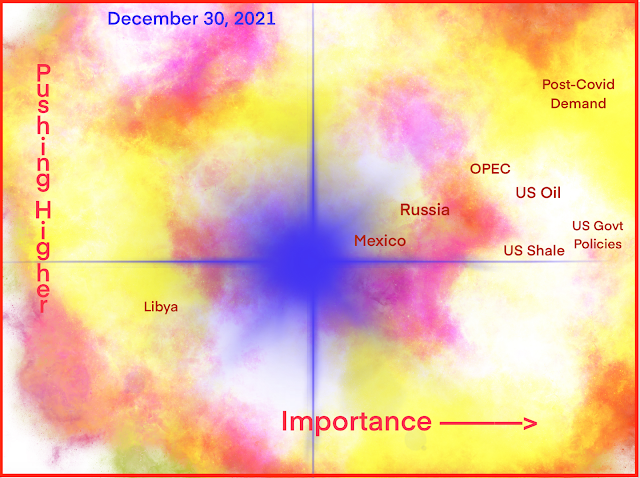 Factors pushing the price of gasoline higher and their relative importance.

Just think, had we just let nature takes it course, this would be all behind us. Having said that, this certainly looks like the beginning of the end. 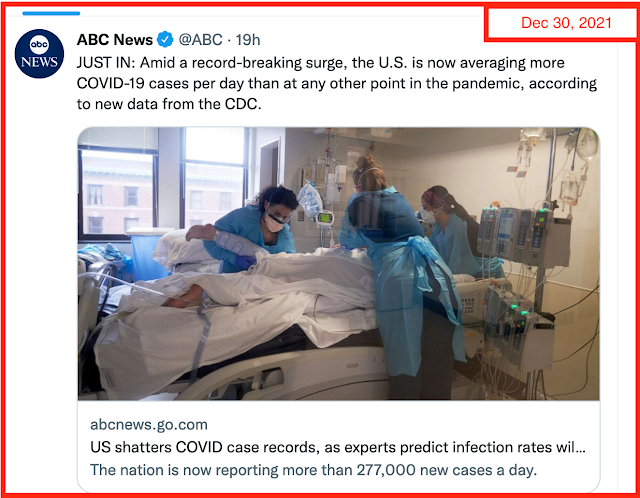 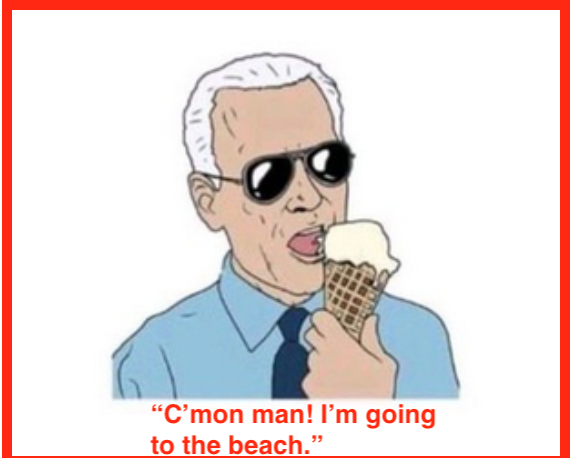 The US reports almost 500,000 new coronavirus cases -- sets a new world record. Why is the most-vaccinated country setting the new all-time record? China and India each have way more people than the US and neither comes close to "our" record-setting numbers.

President Biden hands pandemic back to the states and heads to his Delaware home [I don't think the "national psyche" understands what has just happened; and, quite frankly, ever seen a president walk away from a national problem so abruptly].

Under NYSE Rule 7.2﻿, which governs the exchange’s holiday observances, the stock markets close on the Friday before a holiday that falls on a Saturday and on the Monday after one that falls on a Sunday — “unless unusual business conditions exist, such as the ending of a monthly or yearly accounting period.”

That clause means the markets won’t close on Friday, Dec. 31,﻿ 2021,﻿ because it marks the end of a monthly, quarterly and yearly accounting period, requiring a full day’s trading. This last happened 11 years ago, when January 1, 2011﻿, fell on a Saturday.

My hunch: it's gonna be one huge party on those trading floors tomorrow. Just think, if Louis Rukeyser were still alive -- tomorrow night -- Friday night on PBS ... what will be get instead ... I can only imagine.

The Tahoe area has seen 210 inches of snow since the beginning of the month, the lab, based in Soda Springs, California, reported Wednesday. That makes this month the third snowiest on record and the snowiest December ever, per tracking from the lab that started in 1970.

If weather modeling holds up, it's possible December could also overtake the current No. 2 record holder, February 2019, which saw a whopping 221 inches of snow.

Typically about 110 inches of snow will have fallen by Jan. 1 in a given water year, which begins on Oct. 1. But, so far, 2021 has already seen 264 inches of snowfall, putting the region at 258% of its average for this point in the year and breaking the 51-year-old October through December snowfall record of 260 inches set in 1970.

Cape Cod: and so it goes. We have fond memories of Cape Cod. We spent four years in the Boston area not so long ago. Learned to love Cape Cod. 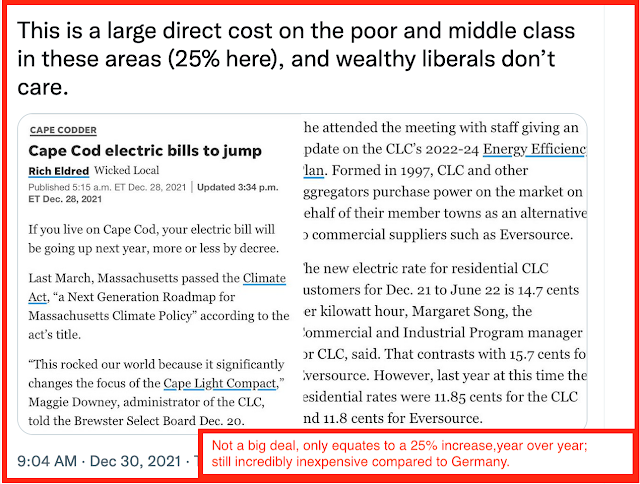 While the US has become the largest producer of natural gas and an ever-larger exporter of LNG, the country does not produce LNG carriers. Since there are no US LNG carriers, New England cannot benefit from the build-out of LNG export facilities along the Gulf of Mexico, despite having significant LNG import facilities like the one in Everett, Massachusetts.  That means New England is in the same bidding pool as Europe and Asia. Amazingly, most LNG imports to the Everett terminal have come from Trinidad and Tobago! Instead of simply building pipelines to its land neighbors, New England pays for boats to sail more than 2,000 miles – burning fossil fuels and polluting the oceans as they do so – and pays a substantially higher price for the privilege.

He was a football savant—named head coach of the Oakland Raiders at age 32, he won a Super Bowl in the 1976 season, and didn’t have a losing year in a full decade on the sideline. On TV, he never talked down to his audience. Football is a complex sport, often described through stiff wartime lingo, but Madden cut through the bombast and made it sound like backyard fun, using newfangled Telestrator technology to diagram schemes as if he was sketching them in the sand.

He was always gently selling—the playmaking, the atmospherics, the coaches, the stars, and especially the lesser-known fellows on the line, because he’d been one of those. Madden loved hirsute centers, rumply ends and roly-poly nose tackles, and on any given Sunday, he’d make household names out of them, too. He began selecting an All-Madden Team, full of his kind of guys, tough men who played with broken thumbs and ate bolt screws for breakfast.

He was both a critical phenomenon and a relentless populist. Madden on TV spoke like he was sitting next to you in an airport bar, except if you knew anything about Madden, you knew he’d never be in the airport. He always took the train, then a customized bus—a choice owing to claustrophobia and a bad episode on a flight while with the Raiders.

I quit watching the Clemson - Iowa game early on; same with the Oregon - Oklahoma game.

But then I caught a replay of the #1 NFL game of all time, called by John Madden.

Now I understand why some consider Roethlisberger a demi-god.

The NBC television network broadcast attracted an average U.S. audience of 98.7 million viewers, making it the most watched Super Bowl in history at that time.

This game was ranked #4 on NFL Top 10 on NFL Network for Top 10 Greatest Games of All Time and ranked #1 for Top 10 Super Bowls. 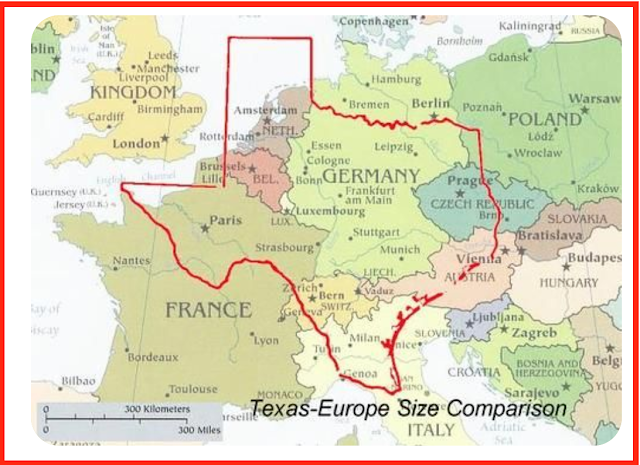 Mexico to end oil exports in 2023. Link to Charles Kennedy.

How do you sum up a year like 2021? It was good times for the economic health of producers and midstreamers alike. Prices were up, as were production and flows. But 2021 also brought along more than its share of chaos, including disruptive market events like Winter Storm Uri’s deep freeze and Europe’s natural gas crisis, along with general perplexity around all things clean, green, renewable, and certified. At RBN we take a different approach to assessing common industry themes. Namely, we examine the events and trends that the market considers the most important — crowd-sourced market intelligence, if you will. We can do that because every weekday we post a blog covering a single topic and blast it to almost 35,000 people, and we scrupulously monitor the website hit rate to see which blogs garner the most interest. Then, at the end of the year, we look back to see which topics rank at the top of the hit parade. That score reveals a lot about major market trends. So today we dive into our Top 10 blogs based on the number of rbnenergy.com website hits over the past year to see what we can learn about where things stand today and what’s up next.

So what was the #1 theme for 2021? Well, the title of today’s blog has already given away the answer. The most prevalent issue resulting in high hit rates across the 255 blogs we posted this year was the collision of the energy transition into energy reality — the challenge of moving toward decarbonization and at the same time making sure markets have enough energy to survive the transition. It’s the energy markets conundrum of the 2020s and beyond. We must live, work, and produce hydrocarbon-based products the way the world works today, while at the same time preparing for and investing in the world to which we’re headed. A world that a lot of folks believe means net-zero greenhouse gas emissions and no more hydrocarbons. It’s like a mild case of schizophrenia; we live in one reality, but we must think in terms of an entirely different future reality. Already we’ve seen evidence of the implications: very messy energy markets. Given this as our theme, let’s see what the top blogs of 2021 can tell us about what we’ve observed so far and what we might expect in the coming year. Just like any year-end Top 10 list, we’ll start with #10 and work our way up to #1.