I won't get to comments, e-mail, news, etc., today like I usually do. Maybe every couple of hours a quick look at the news when we stop for coffee.

South of Ft Worth right now; on our way to south Texas.

I'm curious to see what north side of San Antonio looks like after all these years.

Market, early morning, first trading day of the new year.
What's going on? Actually quite a lot. We've discussed sixteen reasons in the past. But today's story line: "China stimulated its economy." Huge headline but if that's all it takes to move the Dow almost 200 points, I must be missing something. China simply cut the amount of money banks would be required to have on hand, starting this week. I assume the fact that we don't have Iranian-held US hostages in Iraq and that the "protest" ended in less than 48 hours had some effect. The NY Times called the Iranian-backed militia, "mourners," and the WSJ called them "protesters." Someone noted that the attack on Fort Sumter, back in 1861, by the South Carolina militia, using the same analogy, was simply a "protest movement."

By the way, is it "protestors" or "protesters"? Answer here.  Or here.
Disclaimer: this is not an investment site.  Do not make any investment, financial, career, travel, job, or relationship decisions based on what you read here or think you may have read here.

Bowl games: other than for the schools themselves, the college bowl games seemed to have lost all relevancy now that we have the championship playoff system. I noted that about a year ago but had not heard that view expressed elsewhere (I'm sure it had; I just missed it). But last night after the close game at the Rose Bowl -- Oregon, 28 - Wisconsin, 27 -- one of the presenters even mentioned it -- that folks no longer consider the bowl games relevant. He suggested that doesn't mean the games are any less exciting. But there's a difference between "relevancy" and "exciting." Was is a mistake for college football to go the route of the NFL with a championship playoff format? I don't know, but growing up in Williston, ND, I always looked forward to the final AP rankings after the bowl games were played. The rankings always provided several days of discussion. Now we go through the motion of playing the bowl games -- perhaps to fill the void until the championship games some two weeks into the new year.

Transition: recent chatter about the irrelevancy of the aircraft carrier in the 21st century. Maybe, maybe not. Depends. Probably not particularly cost effective. Maybe the answer is just fewer carrier groups. I don't know. But there may be a shift. I completely missed this story back on December 3, 2019, but came across it in the process of looking for something else. This was completely off my radar scope and the fact I didn't see widespread coverage, it makes me think a lot of folks missed it. The data points are staggering:

Five Wells Should Come Off Confidential List Today -- NGLs Come To The Rescue In The Bakken -- RBN Energy -- January 2, 2020

China-US trade war: now that it appears to be coming to an end, CNBC wraps it up in six charts.

Economic expansion could continue for years.

Boom! Shanghai stocks pop on the first day of trading in 2020.

US Navy: orders $22 billion worth of new submarines. 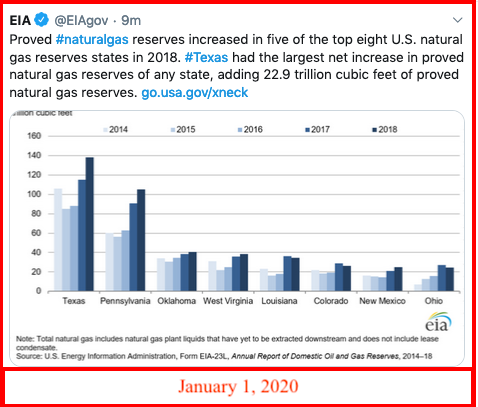 
Negative Permian gas prices. Wall Street sours on all things energy. E&Ps and midstreamers forced by capital markets to tighten their belts. Infrastructure coming online just as production growth is slowing. Oil, gas and NGLs totally dependent on export markets to balance. The list goes on. Just as producers and midstreamers came to terms with a new normal for oil and gas prices, this new round of challenges hit the market in 2019. And it is going to get a lot more complicated as we enter the new decade. There is just no way to predict what is going to happen next, right? Nah. All we need to do is stick our collective RBN necks out one more time, peer into our crystal ball, and see what 2020 has in store for us.


NGLs are coming to the rescue in the Bakken. The past couple of years have been difficult for Bakken producers. Crude prices are down and the economics of drilling and completion are tough to make work outside the four “core” counties in North Dakota. And in those counties, producers have faced a shortfall in natural gas processing and NGL takeaway capacity, which has resulted in more flaring and fewer well completions. But relief has arrived!

[ONEOK's new Elk Creek NGL pipeline is archived here.] New processing plants are coming online and ONEOK’s new Elk Creek y-grade pipeline has just started up — it should resolve the y-grade takeaway issue for a long time to come. Also, by allowing additional ethane to be recovered rather than rejected into the gas stream, the new facilities will also reduce the Btu content for gas flowing into Northern Border, the largest gas takeaway pipe out of the Bakken. Northern Border has been struggling with Btu content issues and is reported to be considering a new, tight Btu spec. All in all, it is a good-news story for the Bakken.

Posted by Bruce Oksol at 6:06 AM No comments: