Earlier it was reported that US crude oil production hit 10 million bopd in November, 2017, (most current data available) for the first time since 1970. EIA data here.

There's a great interactive chart at this post that compares exactly onshore vs offshore US crude oil production.

In addition: look at these stats: 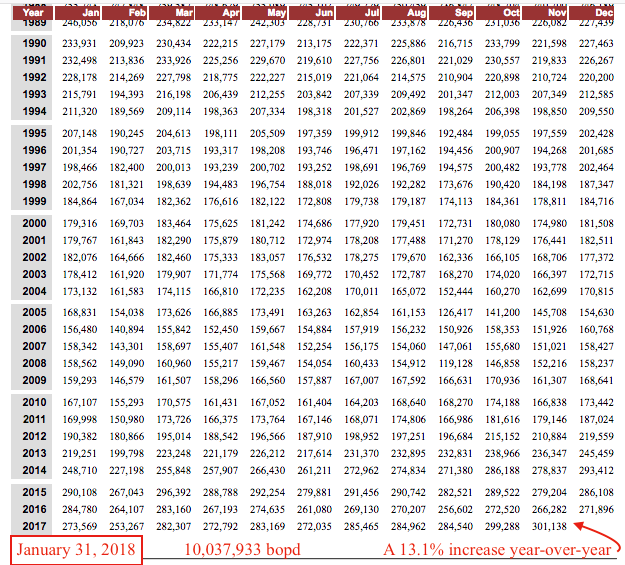 The interesting thing is that when Barack Obama said this, he was removing Federal land from oil exploration. A "drill, baby, drill" strategy off-shore and on Federal land would have probably been as successful as the shale revolution had the former not been stopped dead in its tracks.
Posted by Bruce Oksol at 4:52 PM No comments: 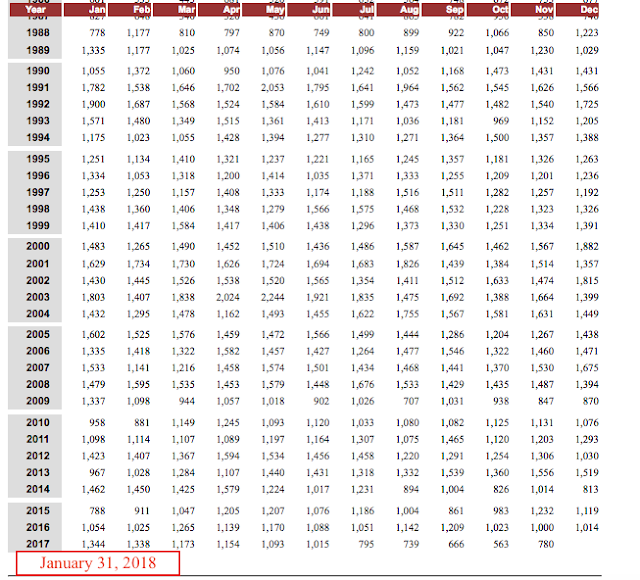 In the dead of winter, this is nice to see -- active rigs in North Dakota jump by 2:


I'm also surprised that WTI price held in there, holding above $64, and actually trending back toward $65.

One permit renewed: a Hunt Patten permit in Mountrail County.

Comment: The MRO Veronica and TAT USA wells are seen in the graphic below. In addition to being an extremely active area right now, MRO is reporting some very huge wells. 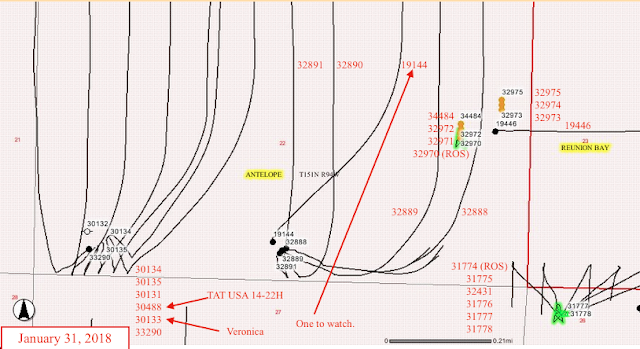 You can choose up to two (2) selections.

Poll encourages folks to offer their own suggestions.
Posted by Bruce Oksol at 3:33 PM No comments:

Disclaimer: this is not an investment site. Do not make any financial, investment, relationship, travel, or job-related decisions based on what you read here or what your spouse might have read here.

EPD from Motley Fool via Yahoo!Finance:


For an investor looking at Enterprise Products Partners for the first time, this past quarter's results probably look great. Gross margins, net income, and cash flow all grew substantially and beat Wall Street's expectations. For those who have followed the company for a long time, though, these results aren't too much of a surprise as this quarter was pretty much business as usual for the oil and gas pipeline and processing giant.

Disclaimer: I'm a long term investor in two pipeline MLPs, including EPD. I have no plans to sell or buy any shares of EPD in the near future.

Disclaimer: I've been an investor in Hess over the past 30 years. I have no plans to buy or sell any shares of Hess in the near future. Growing up in Williston, ND, I grew up with Hess, figuratively and literally.
Posted by Bruce Oksol at 2:30 PM No comments:


U.S. oil production surged above 10 million barrels a day for the first time in four decades, another marker of a profound shift in global crude markets.

The milestone comes weeks after the International Energy Agency said the U.S. is poised for "explosive" growth in oil output that would push it past Saudi Arabia and Russia this year. New drilling and production techniques have opened up billions of barrels of recoverable U.S. oil in shale rock formations in the past 10 years, reversing decades of declining output and turning the nation into an exporter.

Production from Texas, which also included the Eagle Ford play, contributed 3.89 million barrels a day to the November figure, the most of any state. Production from the Gulf of Mexico and North Dakota, where the Bakken shale lies, were close behind.

Later, 3:09 p.m CT: after posting the screenshot/data below, a writer wrote me --

Appears that if Continental expects prices to be higher the following month they increase the pump rate. "My" wells all have remote control enabling pump speed management from Oklahoma ... you've must likely touched on this before and I've forgotten.....

Yes, I've mentioned this before, in passing, but for new newbies, CLR (and others) can control their pumps remotely. I also believe that CLR no longer hedges its oil.

Faster than expected but look at where the US could be a year from now, link here: 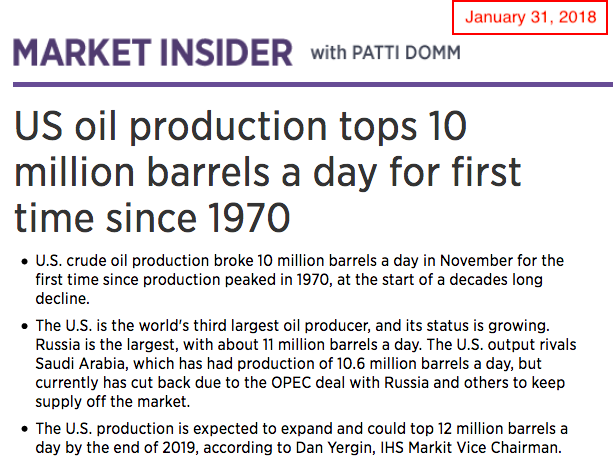 Later, 2:25 p.m. CT: it appears the AP's article was a bit under-stated. Here's what CNBC had to say about the jobs report today:

Jobs, jobs, jobs. Link here.  Data points:
I assume CNBC's Steve Liesman has been able to find the downside in all this.


I haven't watched CBNC the past two days and won't watch it today. I purposely won't watch CNBC during major political events, and I won't watch it during particularly volatile days on the market. The hyperbole of the talking heads is almost too much to take on a "normal, quiet day" in the market; on anything but quiet days, it's impossible for me to watch CNBC; the inanity increases exponentially.

I assume CNBC's senior markets commentator is still talking about overshoot, and I assume Steve Liesman is really, really flabbergasted by the most recent ADP numbers, probably suggesting that the official government numbers coming out tomorrow will likely show something different.

The CNBC crew continues to suggest this "bull market" is long in the tooth, and they don't understand how it can continue. It seems they have not looked at the 100-year Dow chart: 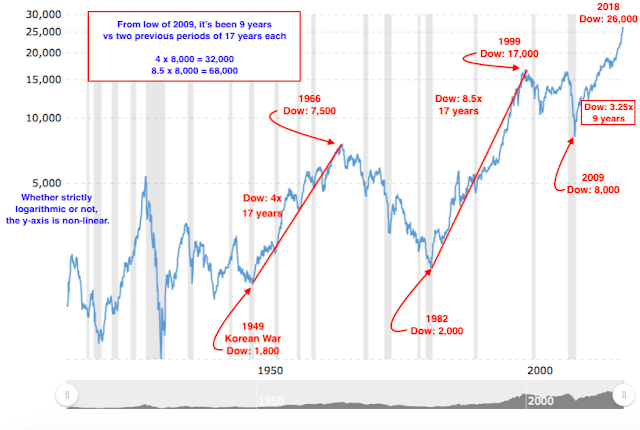 History does not predict what the market will do next, but to say that the current bull market has never happened before or is somehow different or has "overshot," or is frothy or is "different this time," seem(s) to be somewhat inaccurate.

There are many, many story lines in the chart above. Note: the y-axis is non-linear. If it were linear, it would be even more staggering.

I read Michael J Behe's first book many years ago, and read it only once, though I probably read sections of it more than once. I forget.

I was happy to see Behe write a follow-up book but on first reading I was disappointed in the book for a number of reasons: it seemed to be a repeat of what he had already said, and it seemed very repetitious in and of itself. However, now that I am re-reading it very, very slowly, I am very impressed.

It's very much an argument between Michael J Behe and Richard Dawkins. Now that I am reading The Edge of Evolution: The Search for the Limits of Darwinism again, it seems to me that Dawkins deals with the little questions about life, while Behe addresses the big questions about life.

Original Post
Anticipating EIA data later today: posted here.
Re-balancing: the chart was getting too long, so I only included the data since October, 2017. This is really quite amazing. This is the first time in quite some time that the time to re-balance has increased, and the jump/reversal was not trivial. It jumped from 20 weeks to 24 weeks before we see re-balancing based on current rate of decrease in US crude oil inventories:

Pelosi Personality Discorder. Psychiatrists are now suggesting that Pesky Pelosi was catatonic during the SOTU address. Some suggest she has an underlying dissociative disorder. More likely she suffers from post-traumatic stress disorder (PTSD) following events of November 7, 2016, and exacerbated on January 20, 2017. She has previously been diagnosed with MSNBC-CNN personality disorder (DSM-V) which crosses / overlaps three of the five major personality disorders: Antisocial/Psychopathic, Avoidant, Borderline.

This means a lot of Dems did not tune in to watch.
Posted by Bruce Oksol at 9:16 AM No comments:

Link to article sent to me by a reader. Thank you very much.


In response to the GOP tax bill recently passed by Congress, Gate City Bank announced plans late last week to reinvest $1.6 million to benefit its employees, customers and the community.

Customers will benefit from the bank's plan to offer $500,000 in free home appraisals. According to Gate City Bank, an average appraisal is valued at $600.

Pretty amazing. Good for them.
Posted by Bruce Oksol at 8:54 AM No comments:

Disclaimer: this is not an investment site. Do not make any investment, financial, travel, relationship, or job-related decisions based on anything you read here or what you thought you  might have read here.

Apple: Apple likely to post a record-setting $84 billion in quarterly revenue for Q4 2017.


Amid reports that Apple is planning to drastically scale back iPhone X production next quarter, the company later this week may very well post its most impressive earnings report in history. We’ll get a handle on specific figures at the close of trading on Thursday, but in the interim, the consensus on Wall St. is that Apple will post revenue of about $87 billion and EPS in the $3.83 range.

If Apple should come anywhere close to meeting those figures — and there’s no reason to believe it won’t — it will easily mark the most successful quarter in company history. By way of comparison, Apple during the same quarter a year-ago posted $78.4 billion in quarterly revenue and overall earnings of $3.36. Incidentally, the $78.4 billion figure still stands as Apple’s most successful quarter to date. And with Apple last quarter providing revenue guidance in the $84 billion to $87 billion range, it’s a safe bet that Apple during the most recent holiday quarter shattered a number of records.

As a quick point of interest, the most bullish Apple analysts are projecting revenue of $90.2 billion while bearish analysts are anticipating revenue to hover around the $84 billion mark. And as far as overall earnings are concerned, the highest estimate we’ve seen is $4.12 per share while the lowest estimate is $3.41 per share.

So, what is it? A five-fold increase or production to triple? Reported yesterday at this post, that Exxon's production would increase 5-fold in the Permian by 2025. Later, the story changed to this: Exxon production in the Permian would triple by 2025. It seems to me there's a pretty good difference between "five-fold" and "triple." 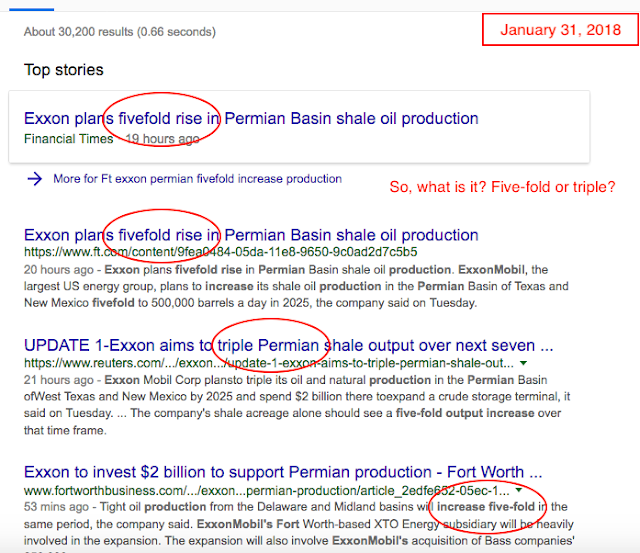