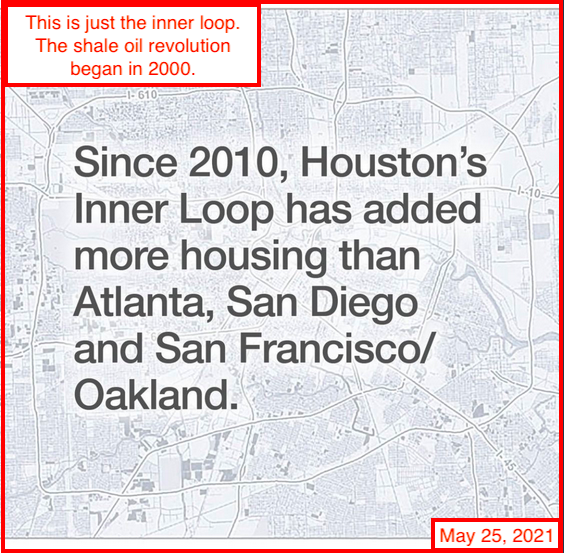 Fancy Buttes: Fancy Buttes is literally two sections big -- that's it -- two sections. It's squeezed in between Dimmick Lake and Johnson Corner. I guess it would be Tier 1 but I've never thought much about it. But, it's so typical of the Bakken. These are mediocre to good wells, but for the mom-and-pop mineral owners, they are outstanding. So much going on. I just don't have time to write about all of this, but these wells really are amazing, considering. Good for CLR.

Posted by Bruce Oksol at 9:58 PM No comments:

A reader alerted me to this story. A huge "thank you." I never would have seen it.

A federal grand jury has indicted the director of the Standing Rock Sioux Tribe’s information technology department and an IT services contractor on three counts of bribery.

The May 12 indictment alleges Sven Schreiber accepted bribes of $5,000 or more twice in 2017 and once in 2019. He was arrested in North Dakota on a warrant issued in the U.S. District of South Dakota. The reservation straddles the Dakotas border. Officials ordered Schreiber to surrender his Swiss passport.

Schreiber became director of the IT department in 2015. He served as the tribe’s primary contact with outside vendors on the department’s bids, contracts and agreements, the indictment states. He was the point of contact with Arnaldo Piccinelli, who is listed on the LinkedIn professional networking site as the senior Java software engineer for the Florida-based company Hexagon Code Inc., which provided IT services to the tribe. The tribe made payments by check to Hexagon or Piccinelli directly at Schreiber’s direction, the document states.

Memo to self: file under "Karma."

Posted by Bruce Oksol at 8:55 PM No comments:

These are the first EOG permits so far in calendar year 2021 in the Bakken.

One has to ask why?

Note the chronologic numbers (in purple). We talked about this years ago during the early days of the boom.

LR = "long reach"; longer than the standard two-section horizontal; generally three sections; although a couple may go 3.5 sections so as not to leave orphaned oil behind;

Currently sited in that section: 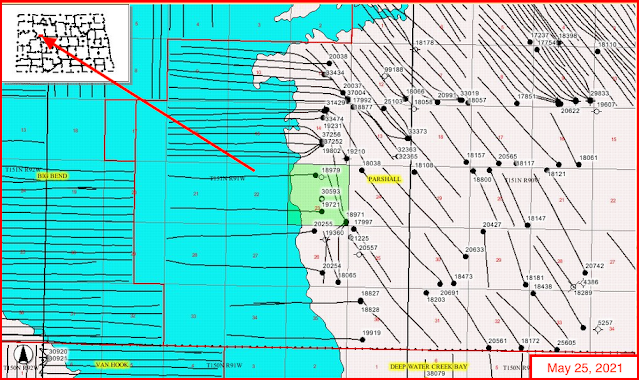 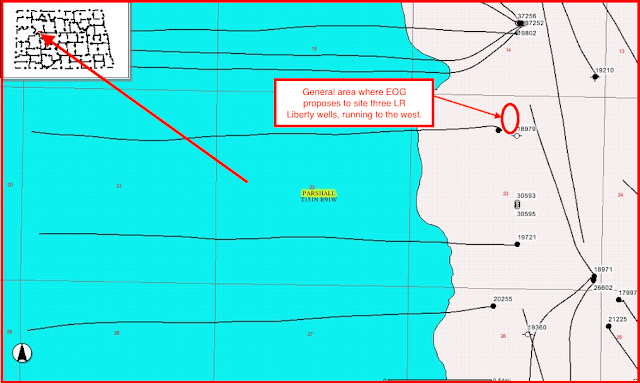 Less Than One Million Vaccinations Reported In Most Recent 24-Hour Period -- May 25, 2021

Column 6: number of vaccinations given in previous 24 hours, CDC data.

Column 6 is derived from delta, column 3. 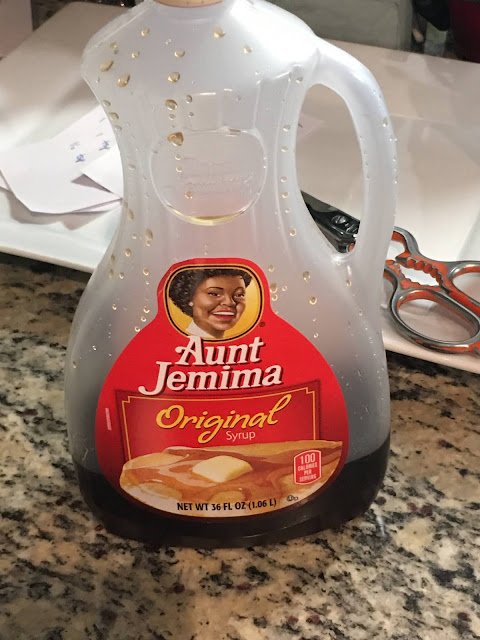 Keeping America great. This has to be frustrating for "the Squad" -- the US just keeps getting better and better (if one ignores what is going on in East St Louis, downtown Minneapolis, and Portland, OR, in general). In the last twenty-four hours, three stories highlighting how far the US has come: 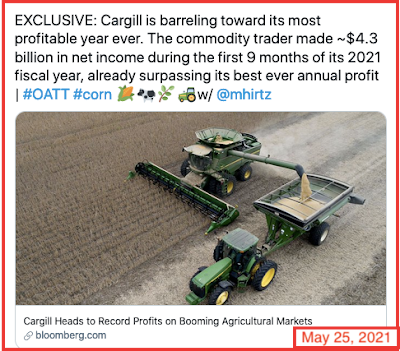 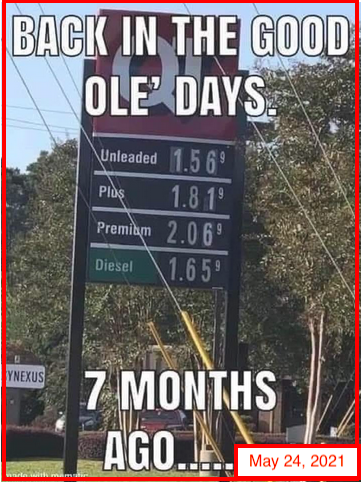 Merger mania: this from "WAR52" -- perhaps the most interesting observer over at Twitter. When he posts, I "listen." See replies here:

Nordstream 2: I'm too bored to talk about it now, but I will post this now for the "time-date" stamp: "the Merkel Markup."

Covid-19: The other day I mentioned that my data suggests that 50.3% of all Americans over the age of 16 are now fully vaccinated. The LA Times is now reporting that "half of Los Angeles County residents 16 and older are now fully vaccinated against Covid-19." With 15% to 30% having naturally-acquired immunity, it's hard to argue that herd immunity does not exist in southern California.

Restaurants in Chicago: can open but must have "vaccinated zones." Not a good idea. Will backfire. Unvaccinated will soon sport an armband of courage.

Zones: speaking of zones, over the past few days I've noticed something in north Texas that I had never seen before: the highway system around DFW has a gazillion signs designating "zones." I have no idea what these zones are. They seem to be numbered completely randomly. Then, out at the DFW airport on Saturday, it appears that the zones designated "rider app" zones. If that makes sense. Let's see what google says. I think this may be what it's all about: Tarrant County (Ft Worth, Texas) ZIPZONE. This is quite amazing. Instead of some complicated address for the Uber driver, one simply types in a two-digit zipzone. And it appears each zip zone is ten to twenty feet of linear real estate.

PGA Tournament: most "shocking" scene -- thousands of fans mobbing Phil and Koepke going to the 18th green. And I didn't see anyone wearing a mask. Virtual signaling: post-tournament interview -- the interview stood twelve feet away when interviewing Phil. I assume they were both fully vaccinated.

SRE: in the news today -- SeekingAlpha -- 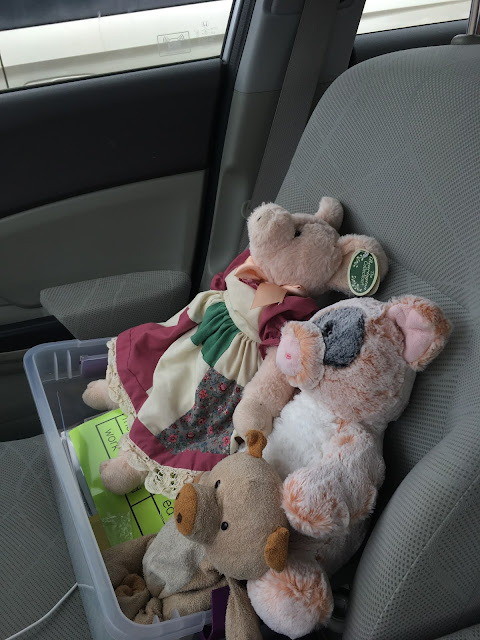 IMO 2020, the mandate that ships plying most international waters slash their sulfur emissions starting in January of last year, was only another step in the International Maritime Organization’s long-running effort to ratchet down the shipping industry’s environmental impact.

The group’s next focus, as you might expect, is reducing shippers’ carbon footprint — while no specific rules have been set, the IMO in 2018 laid out the goal of cutting ships’ carbon dioxide emissions by 40% from their 2008 levels by 2030. One way to move toward that goal would be fueling more ships with LNG, which emits 20-25% less CO2 than very low sulfur fuel oil. But as we discuss in today’s blog, shippers could augment those emission reductions by moving from the LNG trade’s traditional point-to-point model to optimization through cargo swapping.

If earnings beat forecast, watch this stock explode. There are hints that Nvidia could miss forecasts.

Nvidia announces a four-for-one split late last week and the stock surged 4%, up $25, closed at $624, on the first trading day after the announcement. In pre-market trading, before results known, NVDA is up another 1%; up over $7; and trading at $631.

As far as their earnings go, what we're looking at is a potential for a huge quarter for Nvidia, as much as 75% revenue growth for the quarter and as much as 83% on adjusted EPS.

RIDE: investors can't get out of Lordstown fast enough.

OKE: will trend toward a 52-week high.

This story is tracked elsewhere.

At the linked article, note the incredible forest in the Bakken. I had no idea.

Back to the EIS issue, from the liked article:

The problem here is that the EIS is due to be completed by March, so there is not much time and the completion of the EIS may make such a process moot. This is something the plaintiff attorneys will have to examine among any other items that they feel they still have.

The Army Corps presented a rather unique position of its enforcement options:

The Corps additionally maintained - without citing any authority - that it was under no obligation "to take any particular action to cure an encroachment within a specified time period" or even "to ultimately cure the encroachment at all.

This statement threw a monkey wrench into how the original Appeals Court Decision figured things would work. The Appeals Court originally assumed that the Army Corps would make a decision on the encroachment in a prompt manner.

[T]he Court of Appeals emphasized that it "would expect [the agency] to decide promptly. To do otherwise would be to issue a de facto outgrant without engaging in the NEPA analysis that the Corps concedes such an action requires.

That decision was properly the decision of the Army Corps of Engineers. This same Corps is now doing an EIS as the court ordered back in 2020.

Now, about the possibility of a leak "getting to the sacred waters":

Some insights as to likely conclusions were given by the court in its decision. First, there is the fact that the pipeline is a good 90 feet below the lakebed. Any leak would have to be substantial enough to (and move in the right direction) to cover that 90 feet. That would be quite a leak.

Secondly, there appears to be some natural layers between the pipeline and the lake that would inhibit liquids from making it through to the lake bed to begin a pollution-type event.

The biggest thing is that DAPL is a new pipeline with some of the latest safety measures and monitoring equipment available. Most new pipelines have relatively good track records (as does DAPL). Therefore, the court had to conclude that a damaging leak itself was not a realistic possibility because the court classified it as remote (at best).

Even the operating record of Energy Transfer submitted to the court could not overcome the inherent safety of a new pipeline. So any attempt by the plaintiffs to mention damage as a reason for an injunction failed.

Posted by Bruce Oksol at 7:16 AM No comments:

Wow. The inventory of DUCs is at record lows.

This information was sent to me by a reader several weeks ago. I am finally getting it posted. A huge "thanks" to the reader.

Posted by Bruce Oksol at 7:04 AM No comments: