The forecast of fourth-quarter real consumer spending growth increased from 2.5 percent to 3.2 percent after yesterday's Consumer Price Index report from the U.S. Bureau of Labor Statistics and this morning's retail sales release from the U.S. Census Bureau.

We opened some huge boxes that contained a lot of little boxes. Our middle granddaughter suggested we do something creative with all the boxes. My suggestion: play "charades" with the boxes. One stacks the boxes in different configurations and others guess what the stack represents. The "Sears Tower" was the best; reached from the floor to the high ceiling.

Our son-in-law was a US Navy submarine officer for many years, so the next idea was a no-brainer. Later we put a periscope up but no photo and by now the boxes are pretty much destroyed from over-use. But on the wood floor, Sophia's submarine could move about 15 knots -- in extremely short spurts. The only thing we needed was a dog chasing the u-boat. 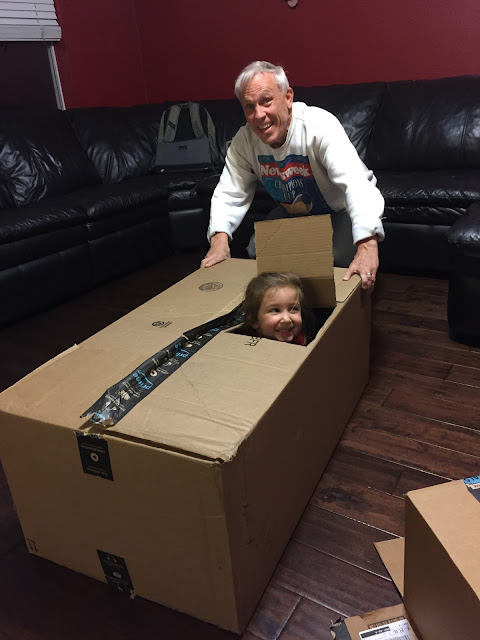 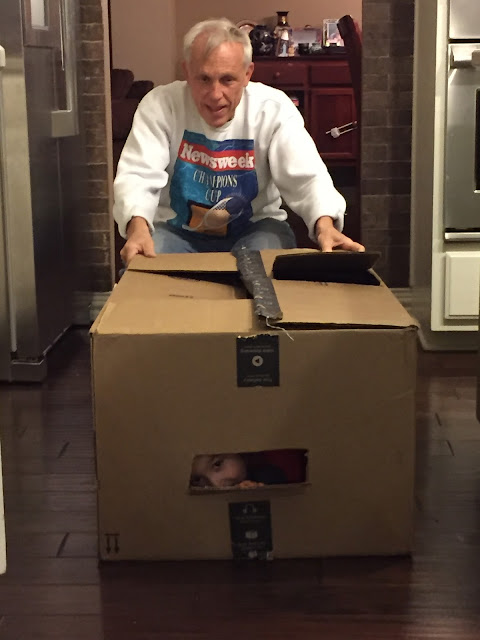 Next year, for her Christmas presents, I'm just going to go down to the neighborhood U-Haul store and buy some oversize boxes for about $1.50/box -- a lot less expensive than actually buying something to put in the boxes.

The Bismarck Tribune has a review/recommendation for a Christmas gift: the biography of a North Dakota woman who invented rocket fuel. I wrote about this book back on February 26, 2015. I would rate it as a must-read for anyone interested in North Dakota history, and for those interested in the American rocket program. It really is a good book.

Justin Trudeau's Goal To Keep-Fossil-Fuel-In-The-Ground Seems To Be Working -- December 16, 2017

December 17, 2017: a reader sent the original post to a friend in Canada. The Canadian reader disagreed with me, saying that Justin Trudeau was in favor of "the Canadian oil sands pipeline." The reader had not heard of George Butts, but this would be like Hillary, had she been elected president, making Tom Steyer her "principal advisor." And this is the problem with folks who are unaware of the persistence of socialists: they are "taken in" by smooth talkers but are unaware of the inner circle advising their elected leaders.

Justin Trudeau can be "for anything he wants to be," depending upon which audience he is addressing, but it doesn't take a rocket scientist to know where his allegiances lie, see clip below.

Unfortunately this is a long clip but skip ahead to 2:05 to hear George Butts in his own words:

It will be interesting to see how "Canada" and Justin Trudeau respond to $30-oil.


Original Post
A reader sent me a note regarding Canada's Justin Trudeau's principal advisor: George Butts. This is what would have happened to us had Hillary been elected. George Butts is Tom Steyer on steroids. George Butts doesn't have the money but he has the power. He is Trudeau's principal advisor on energy (and I assume most everything else). Prior to his current "job," he was president and CEO of the World Wildlife Fund Canada, a global conservation organization. In 2014, Maclean's magazine declared Butts to be the fourteenth most powerful Canadian.

I didn't think that article was of particular interest -- to me it was just another political debacle for the Canadians. So I did not post it and had no plans to post it. Then something else just popped up -- again, another article from a reader, which we will look at farther below, but first:


This is not a rhetorical question. I am truly curious. US refineries are optimized for heavy oil; that's what the Keystone XL pipeline was all about -- bringing heavy oil from western Canada to US refineries along the Gulf coast. Of course that has not panned out.

Meanwhile, imports from Saudi Arabia have dropped significantly and heavy oil imports from Venezuela, I assume, are also dropping. So, where is heavy oil for US refineries coming from? Certainly not from Canada. (Most recent data is from September; it will be quite some time to see data for November/December, 2018.)

The article that caught my attention and changed my mind about posting that bit about George Butts follows.

This article from oilprice.com was sent by another reader: Canadian oil prices plunge to $30/bbl. Data points:
Much more at the linked article.

My hunch: Justin Trudeau is receiving a lot of angry phone calls from Alberta but George Butts is more than happy with how things are turning out. Butts leads the "keep-fossil-fuel-in-the-ground" parade. 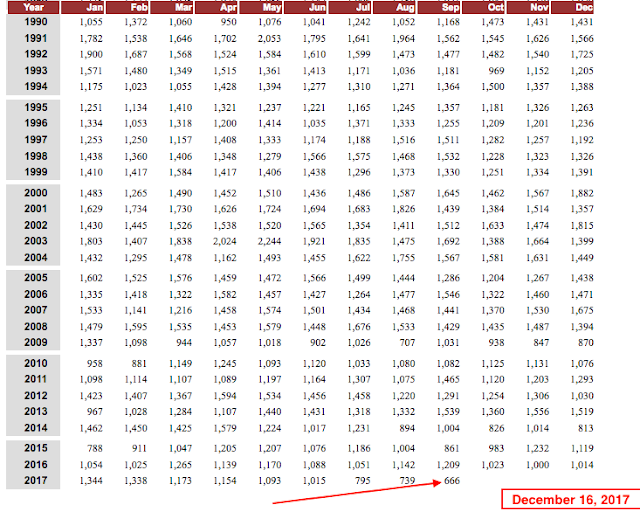 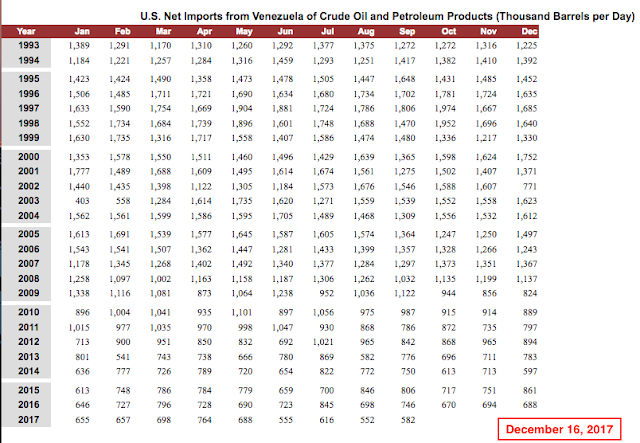 Egypt's giant natural gas field has started production, according to Bloomberg (pay wall) but Reuters also has the story:


Gas from the Mediterranean’s largest offshore field is pumped to a facility in Port Said city, to be prepared for delivery to the national distribution network, with initial production of 350 million cubic feet per day. Daily output is set to rise to about 1 billion cubic feet in June and 2.7 billion by the end of 2019, he said.

So just how big is that "giant" field that has captured Bloomberg's attention? For natural gas, about the same size as the Bakken?

First the data points again, from that huge Egyptian gas field:
Natural gas production from the "oily" Bakken, North Dakota, October, 2017 (most recent month being reported)
It would be nice for Bloomberg to provide some comparison with the Bakken or the Permian. Thank you very much.

See also this post for reserves of natural gas around the world.
Posted by Bruce Oksol at 5:10 PM No comments:

Well, now we know how this Palestinian became a billionaire: catering for US troops during the reign of George H. W. Bush:


Sabih al-Masri, a Palestinian billionaire and the chairman of Jordan’s largest lender Arab Bank, was detained in Saudi Arabia for questioning after a business trip to Riyadh, family sources and friends said on Saturday.

They said Masri, a Saudi citizen and Jordan’s most prominent businessman with holdings in hotels and banking, was detained after heading to the Saudi capital last week to chair meetings of companies he owns.

Masri, who originally comes from a prominent merchant family from Nablus in the Israeli-occupied West Bank, amassed a fortune from partnering with influential Saudis in a major catering business to supply troops during the U.S.-led military operation to retake Kuwait from Iraq in the 1991 Gulf War.

Apparently he did not receive the memo:


Confidants said Masri had been warned not to travel to Saudi Arabia after mass arrests last month of Saudi royals, ministers and businessmen in the biggest purge of the kingdom’s affluent elite in its modern history.

My hunch: the Russians intercepted the advice not to go to Saudi Arabia, and Masri thought all the CNN reports about Prince Salman rounding up rich folks in Riyadh was simply "fake news."


India in 1947 had rather less difficulty gaining its independence than we are having in 2017 leaving the Brussels empire. Time for Boris to go the full Gandhi.


Too many data points in this article to go through -- I will archive the article because it will disappear over time -- but for now, simply this: the public school enrollment continues to grow beyond expectation in North Dakota's oil patch.

Some years ago I said the metric to follow if one was curious whether families would remain in the Bakken "after the boom" was to follow school enrollment figures. In the very, very early days of the boom, "experts" said oil workers (mostly men) would be coming to work in the Bakken but their families would not join them, and that eventually the workers (and any families that might have joined their working spouses) would leave the state.

Apparently, to a large extent that did not happen.

Maine governor wants to get rid of solar panel subsidies:


Maine's Republican governor says he wants to reverse regulators' move to delay a gradual ramp down in compensation for new solar panel owners who generate excess energy. LePage has said utility regulators should have gotten rid of the financial incentive system altogether.

By the way, if there is a shortage of money for North Dakota public schools, the Legislature is authorized to start spending oil money from the "Legacy Fund" as of June, 2017.

Another nuclear reactor ordered to shut down in Japan: link here.

Source for unexplained radiation over Europe: it was the Russians after all.

Another meth lab in Williston? Link here. Having said that, it must have been another slow news day in the Bakken.


A few months ago I was impressed with how many wells produced over 30,000 bbls in one month in the Bakken.

December 16, 2017:  a reader writes me that US News made a similar "mistake" some months ago: "North Dakota oil production jumps slightly in August."

Links:
I could be wrong, but the Newsweek headline ("up slightly") appears to have been written by Barack Obama based on headlines from Platts and Oil & Gas 360. In fact, I believe on a "boe" basis, North Dakota has set a new production record. 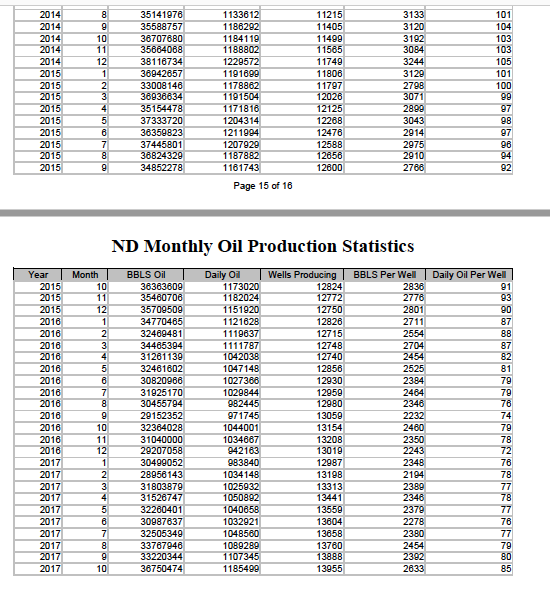