I thought the discussion was closed. The entire headline and lede from The Christian Science Monitor:

Lede: After 15 years of below-average water levels, Lakes Superior, Michigan, and Huron are now well above normal, suggesting that climate change's impact on the fourth seacoast may be more complicated than previously thought.

There you have it.  They don't even call it global warming any more -- they would be laughed off the island ... and climate change is "more complicated than previously thought."

Whatever. More of the story:


While people in the drought-stricken western United States watch lake and reservoir levels relentlessly plunge, the three largest of the Great Lakes have recorded one of the most rapid increases in water levels on record.

The quick turnaround – about two feet for Lake Superior and three feet for Lakes Michigan and Huron between January 2013 and December 2014 – ended what researchers have called an unprecedented 15-year period when lake levels fell below their long-term average.

The turnaround suggests that global warming's impact on the nation's fourth seacoast may be more complicated than implied in past projections, which pointed to a long-term decline in water levels, notes Richard Rood, a scientist at the University of Michigan in Ann Arbor whose research focuses on climate and adaptation and who did not take part in the analysis.

One of my favorite blogs, the Coyote Blog, linked at the sidebar at the right, has not had a new post in the past week. The blog goes back to September, 2004.
Posted by Bruce Oksol at 9:47 PM No comments:

Later, 9:34 p.m. CT: quick! How can you tell the tank cars below were not carrying Bakken crude oil?


A: no explosion, no fire, and Brian Williams not on scene.

Department of Public Safety spokesman Trooper D.L. Wilson says no injuries or fires have been reported from the Saturday evening accident. He says one or two of the methanol-hauling tanks have small leaks.

As Rush would say, there's nothing to see here folks, move on.
Posted by Bruce Oksol at 7:09 PM No comments:

Saudi perspective: Saudi says they will increase sharply the number of drilling rigs. This is a huge story; long-time readers of the blog know my thoughts on this (Saudi Perspective, Peak Oil?)

As the global energy industry stares transfixed at a spectacular drop in U.S. rigs, Saudi Arabia is ramping up the number of machines drilling for oil and gas despite a sharp fall in the price of crude.

Industry sources and analysts say the OPEC kingpin is looking beyond the halving of global oil prices since June 2014 to a time when crude could again be in short supply. Riyadh is therefore keen to preserve what is known as its spare capacity - the kingdom's unique ability to raise oil output quickly at any given moment.

But to achieve that, Saudi Arabia has to drill much more than in the past, after boosting output to record levels to compensate for global supply outages in the past four years. "The Saudis are probably worried about everyone else reducing capex as a result of low oil prices and about non-OPEC output falling off a cliff at some point.

We all know that supply disruptions are unpredictable but they are certain," said Gary Ross, executive chairman of New York oil consultancy PIRA. "The increase in Saudi rig numbers is like a signal to the industry - let's be rational. We will need supply growth in the future." 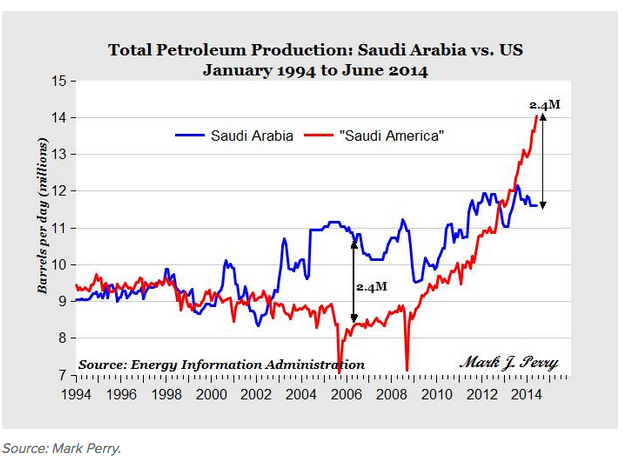 46% of America's crude oil production comes from Texas and North Dakota; the rest from the other 48 states.

I'm not sure whether these stories have any relevancy. First, the source (a Saudi spokesman) is self-serving; second, I've never found the Saudis to be particularly trustworthy; and, then third, some of the statements are completely absurd, such as this one:

"It's not fair for high-cost producers to push low-cost producers out of the market." And then he talks about supply and demand. Give me a break. The whole interview is preposterous. Perhaps something was lost in translation.

For me, this is the important takeaway: if the Saudis are correct, that we won't see $100- or $120-oil any time soon, it really puts a crimp on OPEC countries that base their budgets on $100 - $200 oil. I believe one of the most conservative countries (with regard to pricing) is Saudi Arabia and even they set their budget at $100-oil. Many of the other OPEC countries have a budget based on a much higher number.

For those with short memories (most of the media and much of Congress, I assume), this was the headline story back in September, 2014, less than a year ago:

Regardless of the bar set for Iraq, President Obama touted Yemen as a success story.

I guess it was. We just didn't know that President Obama was rooting for the terrorists.

Once the US special forces leave, this will be another stronghold for the JV team -- ISIS.

Memo to self: scratch Yemen off my bucket list of countries to visit this year.

In an unrelated story, President Obama will soon sign an agreement with Iran, following closely on his successes in Yemen.


The U.S. military is in the process of evacuating about 100 Special Operations forces members from the Al Anad airbase in Yemen due to that country's deteriorating security situation.

Those being evacuated are the last American troops stationed in the Arab nation, which is home to al Qaeda in the Arabian Peninsula, the terrorist group also known as AQAP. The United States closed its embassy in Sanaa last month, after Houthi rebels took over the Yemeni capital. And hundreds of al Qaeda members escaped two Yemeni prisons Thursday and Friday, raising further security questions.

For years, the U.S. military has worked closely with Yemen's government to go after AQAP, together carrying out numerous attacks like the 2011 drone strike that killed prominent al Qaeda figure Anwar al-Awlaki. U.S. President Barack Obama has hailed this cooperation as a pillar in his anti-terrorism campaign.

"Yemen has never been a perfect democracy or a island of stability," Obama said in January, promoting the policy of "partnering and intelligence-sharing with that local government" as the best approach in a bad situation.

Of course, last September, Yemen was one of President Obama's success stories.

Understatement of the century: "Yemen has never been a perfect democracy or a island of stability." -- President Obama.


Given that Obamacare’s supporters like to take the Congressional Budget Office’s overly optimistic scoring of the president’s signature legislation as gospel, it’s fun to look at how poorly Obamacare is actually doing in relation to earlier CBO projections.

When the Democrats rammed Obamacare through Congress in 2010 without a single Republican vote, the CBO said that the unpopular overhaul would lead to a net increase of 26 million people with health insurance by 2015 (15 million through Medicaid plus 13 million through the Obamacare exchanges minus 2 million who would otherwise have had private insurance but wouldn’t because of Obamacare).


Fast-forwarding five years, the CBO now says that Obamacare’s tally for 2015 will actually be a net increase of just 17 million people (10 million through Medicaid plus 11 million through the Obamacare exchanges minus 4 million who would otherwise have had private insurance but won’t, or don’t, because of Obamacare).

In other words, Obamacare is now slated to hit only 65 percent of the CBO’s original coverage projection for 2015.

The numbers have always been an issue, but the real travesty is that ObamaCare is nothing more than high-priced catastrophic health insurance.
Posted by Bruce Oksol at 10:09 AM No comments:

The story was reported earlier but this is a better source. Rigzone is reporting:


The U.S. Department of the Interior (DOI) released Friday its final rule through which the Bureau of Land Management (BLM) would implement new regulations for hydraulic fracturing activity on U.S. and federal and Indian lands. The new rule, which will take effect in 90 days, would require oil and gas companies to validate the integrity of well construction and require companies to disclose the chemicals used in hydraulic fracturing to BLM through the website FracFocus within 30 days of completing fracturing operations on a well. It also would ban the use of wastewater pits at drilling sites, requiring companies to use above ground tanks instead, to mitigate the impact of recovered waste fluids on air, water and wildlife. Additionally, companies would have to submit more detailed information on geology, depth and location of pre-existing wells to allow BLM to better evaluate and manage the risks of cross-well contamination with chemicals and fluids used in a fracturing operation that could result in a spill or blowout.

There is a "laboratory" that will help sort out how these new rules affect the industry. The "laboratory" is the "Bakken laboratory."

I haven't done the math, but it is said that one-third of the Bakken coming out of North Dakota is produced on the Fort Berthold Indian Reservation.

I know nothing about this but I have a hunch the natural gas industry (as opposed to oil) was the real target, although I doubt the outcome for either is all that different.

With regard to waste, I think I've already seen the changes being made in the Bakken; to what extent, I do not know. But there will be entrepreneurs to take advantage of these new rules. 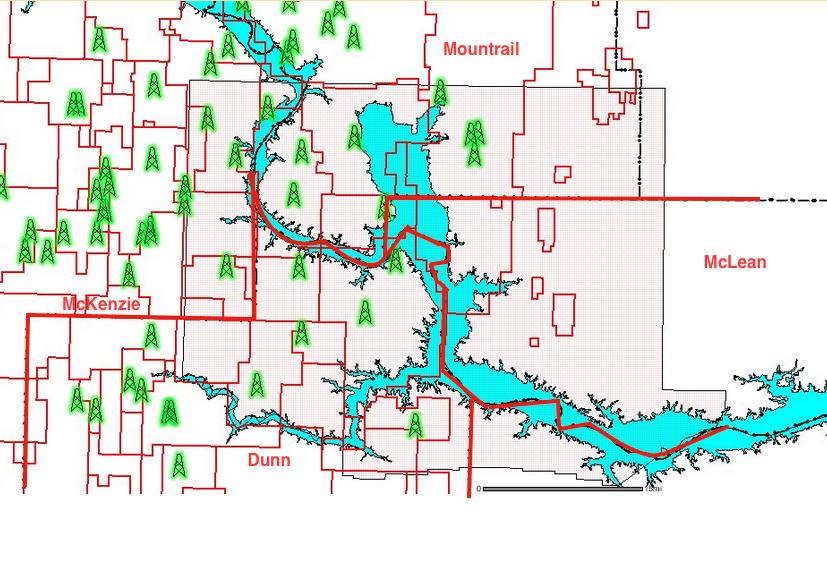 These are most of the fields that are completely within the boundaries of the reservation: 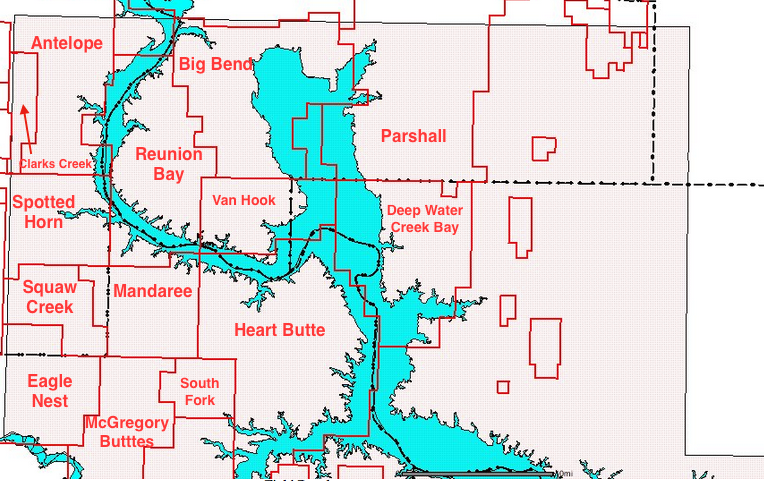 Whiting's Sanish oil field is west of EOG's Parshall field; the Sanish is entirely outside the reservation. About one-third of the Parshall sits inside the reservation. I forgot to label Moccasin Creek in the graphic above -- it was a huge field for KOG, not a huge field for Whiting. Moccasin Creek is located just south of South Fork/east of McGregory Buttes.
Posted by Bruce Oksol at 10:04 AM No comments: