From don't mess with taxes.com:


IRS goes against Trump's "order. IRS backs off Trump's Obamacare order, will enforce ACA coverage reporting rule.What's going on with the Affordable Care Act (ACA)? It depends on where you're looking for answers.

Federal lawmakers remain in a quandary over how to deal with the ACA, or as it's known (for now) Obamacare.

The Internal Revenue Service, however, made it clear this week that it plans to follow the health care law's reporting requirements as long as they are officially on the books.

That's a reversal of a prior IRS position.

However, given the confusion with the law, both under its namesake president and since Donald J. Trump moved into the Oval Office, the tax agency's position change isn't surprising.

I find it amazing that a government agency that works directly for the executive branch ignores the President of the United States. Tell me again about draining the swamp. Tell me again there's no "deep state." But I digress.

Flash forward two-and-a-half months: Congress easily passes and president wastes no time signing the biggest tax cut in the history of the US which, among a few other things, specifically states that, "no, the IRS won't enforce the individual mandate."

Ding, dong, The witch is dead.


The Wizard of Oz

North Dakota budget: probably easiest to read is at Ballotpedia. 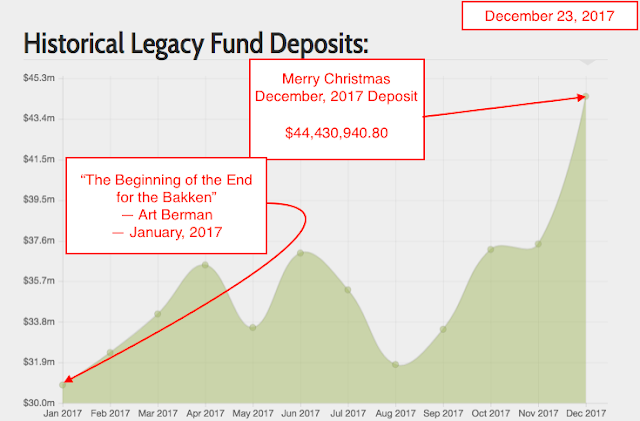 Memo to North Dakota State Treasurer: I don't think anyone would mind if the state rounded off monthly deposits to the nearest $10 but noting the "80 cents" is a nice touch.

BOE (back of the proverbial envelope):
Ah, yes, "the end of the beginning for the Bakken."
Posted by Bruce Oksol at 5:57 PM No comments:

The item is very short:


WBI Energy Transmission Inc. filed an application with the Federal Energy Regulatory Commission for a new section of pipeline to boost transportation capacity to the company's interconnect with Northern Border Pipeline Co. in western North Dakota.

The project would include 12 miles of 24-inch-diameter steel pipeline that would begin at the Spring Creek meter station and end at the Cherry Creek valve setting. The company said it has precedent agreements with Oasis Petroleum Marketing LLC and ONEOK Rockies Midstream LLC for 196,000 Dth/d and 10,000 Dth/d of incremental firm transportation service, respectively.

That was it. My comments/observations:
This is pretty cool. If you are remotely interested in this project or just want to have some fun looking at FERC documents and maps of North Dakota, simply click on this http://www.wbienergy.com/docs/default-source/demicks-lake-ferc/wbi-demicks-lake-draft-resources-report-10.pdf?sfvrsn=4. A PDF will probably download on your desktop.

It downloads incredibly quickly suggesting it's in the cloud. It will download faster on a cloudy day.

I don't know how long the Bakken will last or how important the Bakken will be in the big scheme of things. All I know is that "they" aren't putting in 12 miles of 2-foot-diameter pipeline for upwards of $15 million for a one-year science project. Art Berman can say it's the "beginning of the end" for the Bakken and The Atlantic can say the boom is over and oilprice can say that US shale is not the answer and yada, yada, yada, but without question there's a lot going on in four little counties in western North Dakota, providing a lot of high-paying jobs for a long, long time, and for the most part not upsetting the gods to any significant extent -- at least the volcanoes in western North Dakota are not erupting, suggesting the gods can't be too mad at "us."
Posted by Bruce Oksol at 5:30 PM No comments:


Chinese natural gas consumption surged through the first 11 months of 2017, up 19 percent year-on-year.

China is the third largest consumer of natural gas in the world, behind the U.S. and Russia, and is expected to show the strongest demand growth over the coming decades—propelling it to second place by 2040.

As the nation's industrial and residential sectors pivot away from coal (think: smog), natural gas demand is going through the roof, with domestic Chinese LNG prices reaching a six-year high in recent weeks.

One data point that highlights these tightening fundamentals is how CNOOC just rented a convoy of 100 trucks to transport LNG thousands of kilometers to northern regions in China to fill supply gaps.

Natural gas consumption: US, Russia, China, and then India, I suppose. That tells met that India is using a lot of coal (as is China, of course).

North Texas. Yesterday was cold, windy, rainy -- it completely reminded me of southern Scotland in winter. We were told to expect more of the same today.

It was a bit cool taking Sophia to gymnastics and then swimming this morning, but when we left the education and training center about noon, it was a beautiful day: bright sunshine, no wind, and fairly warm.

Now (about 4:00 p.m.CT) it's short-sleeve weather and not a cloud in the sky. Our older granddaughter says our e-mail will be slower today since "everything is now in the cloud," and THE cloud is nowhere to be seen today. Yesterday, with all the clouds, she said, our e-mail moved very, very quickly.

Speaking of which, I'm told that iPhones use slightly more power on nights when there are full moons. To protect the iPhones, Apple will throttle back the processing time of older iPhones to conserve battery power when the moon is full. Apple says that most people won't notice it but if they do it will be rare, usually only once in a blue moon, or 1.16699016 x 10-8 hertz.

I assume Apple is making the announcement to fend off class-action lawsuits.

All I know is it's great bicycling weather and that's what I'm doing -- but stopping now for a Coke and a bit  of blogging.

ISO New England: spot price for electricity surged to almost $250/MWh earlier this morning and $150 this afternoon, but is now (6:34 p.m. ET) down to about $50/MWH. How's that renewable energy working out?

Global warming. Both China and the UK are experiencing incredibly cold winters. I mentioned China's winter a few weeks ago and now I'm hearing about the weather in the UK. We've talked about this many times over the years. If I find the old posts, I will link them but I'm not going to go looking for them. The articles today (sent by various readers):
I did not see England's most famous analyst mention the forecast for such a harsh British winter; if John Kemp tweeted it, I missed it.

Thank goodness for global warming to provide a bit of warming effect on this very, very cold weather to hit Great Britain ... and just when things seemed to be going so well.

Killing eagles. This is my world view of the laws protecting migratory birds:
I have no dog in this fight. It is what it is, but considering that slicers and dicers, and solar fryers kill tens of thousands of more birds than any oil site, this bill is clearly a huge win for the renewable energy sector. It also provides a lot of "coverage" for USAF air bases. I know there were more than a few Air Force commanders that wanted to kill the Canadian geese pooping on military golf courses.

It was not hard to see this one coming. Either it's legal or not legal to kill migratory birds accidentally, but one energy industry cannot be held to a different standard than another energy industry.

However this issue plays out -- I assume it will end up in court -- it's going to be entertaining to watch the Sierra Club thread this needle.

Later: now that unlimited bird strikes are allowed, maybe this wind farm developer will re-consider. Back on December 18, 2017, Penn Energy reported that an energy company has cancelled plans for a wind farm in central Montana, blaming the regulators, saying the regulators set the price too high to make the project unfeasible. TransAlta has scrapped the 21-megawatt farm near Martinsdale after regulators approved a price of $23.30 per megawatt hour. The Calgary-based company wanted more than $43 per megawatter hour for the power. Consumers wanted a price of .... drum roll ... $13.96.

Montana: I heard on the radio yesterday that the electricity grid is still pretty much shut down in Puerto Rico.


One wonders if this would have been resolved by now if that Montana company had been allowed to simply complete their job and not told to leave the island by the US Congress. Just wondering. I know anything Montana folks set their minds to will get it done. I have personal experience. As a high school wrestler our Williston team wrestled teams from Montana and North Dakota. The only teams that "terrified" me were the Montana teams.

Back to that Chinese winter story, in case the link is broken. It's an important story on so many levels:


The world’s largest energy user -- that would be CHINA -- is facing a winter supply crunch after demand surged this year amid President Xi Jinping’s fight against smog, which has focused on cutting the use of coal in favor of cleaner-burning gas.

Parts of the country started facing shortages just two weeks into winter, with Hebei and Shandong provinces in the north and central Hubei reporting supply shortfalls last month and curtailing supplies to businesses and factories in order to keep homes warm.

And I thought wind energy and solar energy was going to solve all the world's energy problems. Silly me.
Posted by Bruce Oksol at 4:57 PM No comments: