It's been an incredibly good day -- biking, lunch, the equity markets, yada, yada, yada -- I think I'm going to take the rest of the day off.

I'm going to see "the play" again tonight (posted earlier). I will be picking up Sophia from Tutor Time in a few minutes. The weather is gorgeous -- windy for biking but otherwise great.

I've got several books I want to read. We'll be celebrating later (and late) this evening after the play. May has already bought the sparkling grape juice (no alcohol at this party for the granddaughters).

By the way, having said that, how's this for an exotic cocktail, discovered in the book I picked up at the library today on octopuses:


An octopus's garden cocktail: shake three parts gin and one dry vermouth with ice; strain and serve garnished with a charged baby octopus and a black olive.

Our adult daughter doesn't (actually both of them don't) drink alcohol, but she will enjoy the thought of the recipe.

She and I had planned to buy a large Spanish octopus, marinade it overnight to "soften" it up, and then grill octopus shish kabobs. We had thought of grilling what she normally gets, the large common Spanish octopus, but baby octopus sounds so much easier.


For millennials (typically individuals in their early twenties to late thirties as of 2018), Apple earned the top spot as the most intimate brand in the U.S. In second place was Disney, followed by YouTube, Target, and Amazon. The top four spots last year for millennials were Disney in first, followed by Amazon, Netflix, and then Apple, so the company has climbed and beaten out a few well-known brands this year.

Apple and Disney ranked as the first and second most intimate brands for millennials. Comparatively, in MBLM's 2017 report, Disney placed first, followed by Amazon and Netflix.

The other brands that round out the top 10 are: Target, Amazon, Nintendo, Google, Xbox, Netflix and Whole Foods.

The age group of 18-24 year-olds had a slightly different mix of top companies. The top 10 for the group are: Apple, Amazon, YouTube, PlayStation, Starbucks, Nintendo, Google, Netflix, Coca Cola and Walmart.

Back in 2014, all ages, not just millennials, the most intimate brands, link here:

Other surprises:
Not surprised: Toyota made the list. But I was surprised that Honda did not make the list.

From a google search:


“Brand intimacy is an essential relationship between a person and brand that transcends purchase, usage and loyalty.”

In other words, price (within reason), means little, and customers will keep coming back to their intimate brands, no matter what.

Another example of analysts watching the wrong metric.

It's no longer about the iPhone, it's about cash flow.  And has been for quite some time.

Another example of another revenue stream for Apple -- and another way the Apple Watch will be making money for Apple. Apple Watch can accurately test for high serum potassium (K+) and atrial fibrillation.

March 10, 2018: the "job picture" since Trump became president has been so stunning, CNN has quit updating its "Trump's Jobs Tracker." I can't make this stuff up. My hunch: CNN is going to start tracking U-6.

I feel like I'm beating a dead horse, but this is a big, big deal.

As you all know, I quit watching television on February 1, 2018, because I knew the news that day was going to result in huge volatility; I now forget the specific bit of news. I said I would not go back to business news (CNBC) until March 1, 2018.

By March 1, 2018, I had really lost interest in returning to CNBC (I felt so liberated) but then, as luck would have it, it was reported that President Trump was going to place tariffs on steel and aluminum. I knew that volatility was back, as would the inanity and banality of the talking heads trying to explain daily movements, up or down, of 400 points on the Dow, so I continued my own little boycott.

Until today. Sort of.

With the release of the February jobs numbers I was curious what the market would do, and turned on television and turned to CNBC for less than 30 seconds when I got home a few minutes ago.

I still didn't watch any CNBC today because a) I didn't want to; and, b) I was either riding my bike; at the Grapevine, TX, library; or at a sushi restaurant (Kula, near Plano, TX) for lunch with my wife.

I just got home and wanted to see if the market was holding. I got my original information from the Drudge Report. I posted much of that earlier.

Then this link from Drudge: "These numbers are crazy." -- Steve Liesman.

Steve Liesman, what can I say:
And, so today, how could I not go to the linked story? 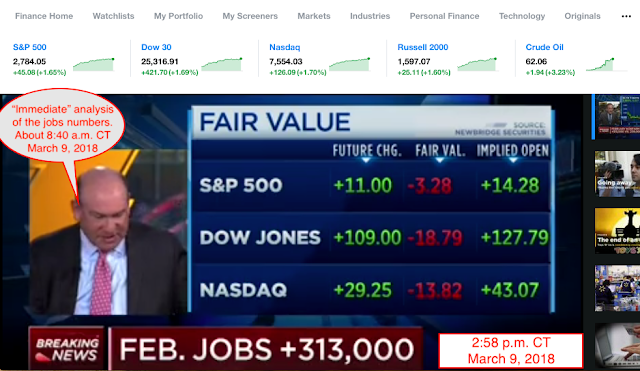 Wow, what a great screen shot. Notice the market just after the numbers were released. Prior to the jobs report, the Dow was set to open about 34 points on the upside.

Up 127 points immediately after the jobs numbers were released and once the traders had a chance to look at the "deeper" data, the market was up over 400 points -- before the close on a Friday afternoon.

Cowboyistan in the Buckeye State.

The Utica is tracked here.
Posted by Bruce Oksol at 2:40 PM No comments:

Email ThisBlogThis!Share to TwitterShare to FacebookShare to Pinterest
Labels: NG_US

Trade war? What trade war? Ya gotta love Trump. He knows how to play the game. I'm sure "The Apprentice" helped. He learned how to "stage" cliff-hangers -- not just at the end of the season; or, at the end of an episode; but, every 12 - 15 minutes, at the end of each segment of that television show. He's carried that over to the Oval Office.

Turns out that:
What's the problem? Where's the trade war.

Boeing: the only company that might have had a legitimate gripe. Share price for one year and for one morning (today): 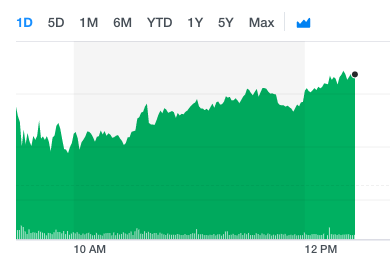 Give me a break. Gary Cohn truly showed his colors. Good riddance.

Yesterday, I read much of the following book and took notes:

So, we can now compare the two biographies.

The Trojan War, Barry Strauss, c. 2006. Wow, I never get tired of reading and re-reading about Homer's Iliad and Odyssey.

And finally, Octopus: The Most Mysterious Creature in the Sea, Katherine Harmon Courage, c. 2013.

It's possible I've read these books (or parts of them) before, but I do not recall.

By the way, Sophia and I attended a college/high school play last night: "James and the Giant Peach." It was the first play that her older sister, a freshman in high school, had ever participated in. She played one of the actors.

It was incredible. We will go back and watch it again tonight.

Sophia, age 3.6 years old, appeared to be enthralled and actually paid close attention to the play. For those who don't know the play, there is a scene in which James is instructed to find a magic potion from a book and then cast a spell.

When we got home, on her own, my wife was lucky enough to get three photos of Sophia doing the same and explaining to May what she was doing. Until this morning when I told her, May did not know there was a scene in "James and the Giant Peach" that involved making a potion and casting a magic spell.

Here are the photos: 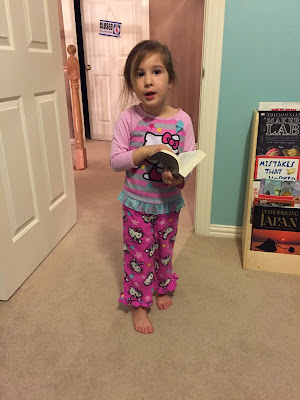 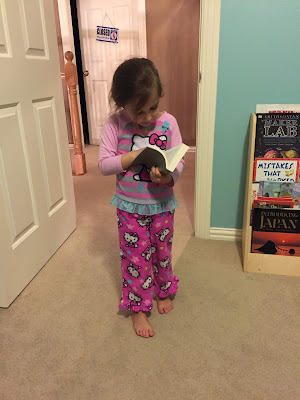 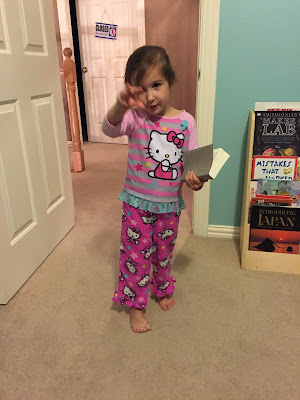 Some of this might be a repeat from earlier posts. It's hard to keep track of everything.

A reader reminded me that I need to follow-up on a few wells. I have some of these wells at my "Things To Follow Up On " page, but I will start the post now. However, it will be a few months before all the data is in. I can't recall if I've posted a graphic of this area previously.

The wells (all of these may or may not be on the graphic); note the IP for 6,204 for Three Forks first bench well; years ago, Lynn Helms opined that Three Forks wells, individually, might be better than middle Bakken wells; very little is known about the deeper Three Forks benches but we are starting to see a few deeper-bench Three Forks wells:
Among the things I'm interested in: 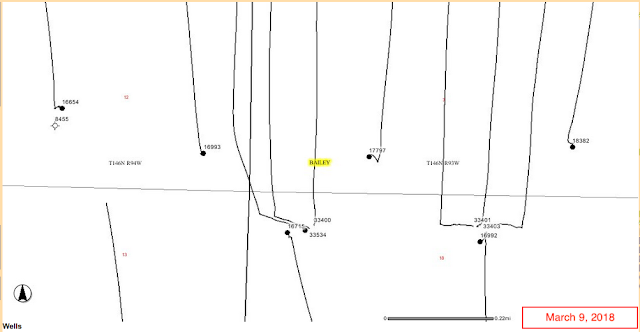 We talked about this the other day. I dare someone to find a a link to a site that provides transparency regarding the Legacy Fund. I have not looked recently and it may be easy to find, but when I did look some months ago, I was unable to find anything. I'm sure it's easy to find and I'm just looking in all the wrong places: 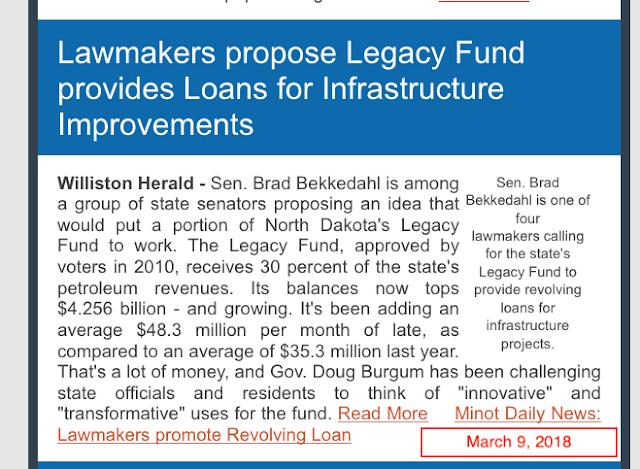 I did not bother to link / post the story suggesting that Saudi's announcement that they might target shale in their own country -- after I read the story, I found it meaningless, and more oilprice.com click bait.

And here it, John Kemp noting that Saudi might not go after shale -- I did not read the article but if accurate it speaks volumes about Saudi's oil and natural gas reserves.  Saudi is facing an existential crisis and regardless of what they might say publicly, they would go after "new" reserves in their own country if it was economically feasible.

Anyway, regardless of the idle chatter, here's John Kemp's graphic today via Twitter and my comments that follow. 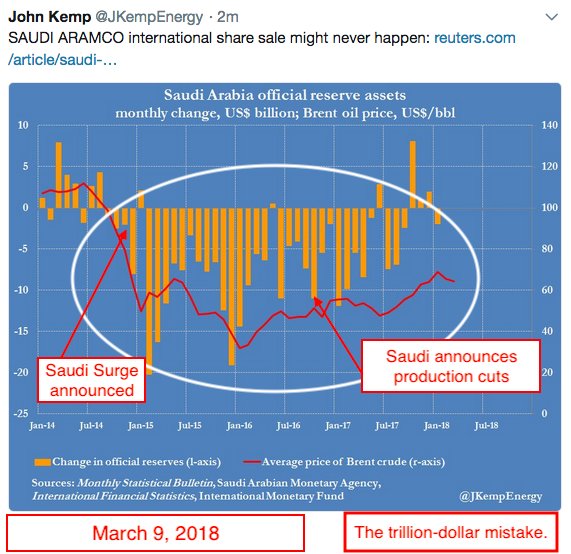 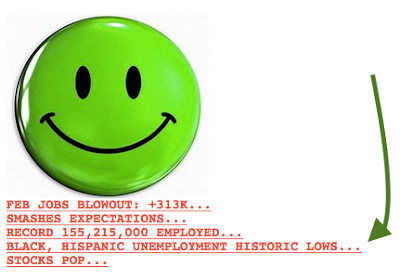 February jobs report: Wow.
Optics: in one graphic, and a few links, the Drudge Report does more to "paint the picture" than all the articles; no wonder "everyone" likes Drudge -- except the alt-left and the FCC.
What to watch for: WSJ.


Economists expect employers added at least 200,000 workers to payrolls for the second straight month (and fourth month in the past five). That would start off 2018 at a better hiring pace than last year’s average monthly job growth of 181,000. An acceleration in hiring runs counter to economists’ expectation for job gains to ease in a historically tight labor market.

RBN Energy: how a refiner bet on accessible American crude, and lost.


When Philadelphia Energy Solutions (PES), owner of the East Coast’s largest refinery, recently announced it was seeking Chapter 11 bankruptcy protection, it begged a question: What happened? The answer requires a look back at the company’s original vision — namely, to capture the upside of the Shale Revolution by processing price-advantaged light, sweet crude oil produced in the U.S. — as well as a review of market developments that undermined its plan.

Today, we look at the factors that drove PES’s hopes and why, in the end, they weren’t realized. PES was formed as a partnership in September 2012 between The Carlyle Group and Sunoco Inc. to rescue the 335-Mb/d Philadelphia Refining Complex. Carlyle would hold a two-thirds ownership interest while Sunoco Inc. (which bought the complex’s Point Breeze refinery in 1988 and its Girard Point refinery in 1994) retained ownership of the remaining third. Just after the PES partnership was launched, in October 2012, Sunoco became a subsidiary of Energy Transfer Partners.