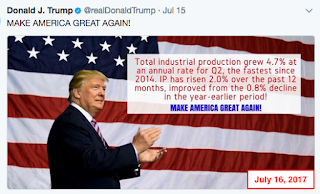 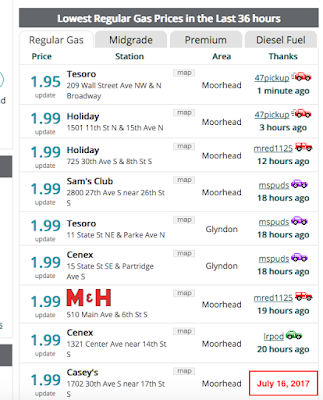 Original Post
From 24/7 Wall Street, the five states:
President Trump was not mentioned in the article.

By the way, I'm being told that the video above is fake. Either part of Obama's speech was deleted by the Russians, or he turned from the monitor too soon and missed the rest of the statement.

President Obama's entire statement on this issue was apparently this: "We can't just drill our way to lower gas prices; we need to frack, too. Especially in the Bakken. And maybe even off-shore."

Unless you've been under the Geico Rock for the past two months you know that:
So that leads us to the headline story over at GoogleFinance right now: France calls for swift lifting of sanctions on Qatari nationals.

Link here. I can't make this stuff up.

Congress needs to write a new law: Air Canada planes need to land on runways, not taxiways. It would help prevent near accidents like this. Would a robotic pilot have done a better job?Of course.
Posted by Bruce Oksol at 12:31 PM No comments:

A few days ago I said that if I had the time I would come back to this story:


Connecting dots: if I'm in the mood later this weekend, I will blog a stand-along post on this very interesting phenomenon.


This is how it all started, this paragraph buried in a long RBN Energy post:


Potentially even more significant than the recent impact of the SPR is the outlook for future draws at the reserve. In addition to the Section 404 and 21st Century Cures Act withdrawals discussed above, Congress also has authorized additional SPR withdrawals in 2018-25.

Section 403 of the Bipartisan Budget Act of 2015 directs the DOE to sell a total of 58 MMbbl over that period, starting with 5 MMbbl in 2018, with the resulting revenue to go to the Treasury Department’s general fund.

And the Fix America’s Surface Transportation Act, signed into law by President Obama in December 2016, calls for a total of 66 MMbbl to be sold from the SPR in 2023-25. Figure 3 shows the planned SPR drawdowns over the next eight years.

Two interesting links follow from the above:
Personal communication with worker at a specialty heavy truck manufacturer in Portland Oregon:
But this was the kicker: the individual reported that the company did not make the decision to go forward with increased production UNTIL after Trump was elected president. The company apparently waited until the election outcome to decide whether to increase production.

I learned of the Portland story a week or so before I read the blurb in the RBN Energy post, so I was keeping my eye out for collaborating information. It was interesting to find it buried in an RBN Energy post. So much fun.
Posted by Bruce Oksol at 10:29 AM No comments:

Email ThisBlogThis!Share to TwitterShare to FacebookShare to Pinterest
Labels: MakeAmericaGreatAgain

Older Fields Around The World Are Shutting Down Faster Than Usual Due To Low Oil Prices -- July 15, 2017

Later, 11:31 a.m. Central Time: see first comment for some fun YouTube links. More importantly note the comment about "creative destruction." I'm always negatively impressed that Bloomberg seems to dwell on the negative outcomes of certain actions rather than the positive outcomes. But in this case, I think Bloomberg has it exactly wrong, suggesting that shutting down fields could be "bad news" if shale production cannot make up for the cuts in production elsewhere. Folks were also concerned that shale could not ramp up quickly enough if need be. In fact, if the older oil fields are needed, I have no doubt the oil companies can get back in very, very quickly.

This is an interesting story. It's a few days old; I had seen the headline but did not read the story ... until now.

It turns out that because of the current OPEC - US shale story, "older" oil fields around the globe are shutting down faster than the historical pace. From Bloomberg:


The tussle for supremacy between OPEC and U.S. shale drillers is killing off older oil fields at the fastest pace in almost a quarter century. That could hurt the industry once the current glut has faded.

The three-year price slump triggered by the battle for market share choked off funds for aging deposits elsewhere, accelerating their decline. Output at older fields from China to North America -- making up a third of world supply -- fell 5.7 percent last year, the most since 1992, according to Rystad Energy AS. It’ll drop about 6 percent in 2017 if oil stays at current prices, the consultant said.

Oil fell from above $100 a barrel in 2014 to as low as $26 in 2016 as the Organization of Petroleum Exporting Countries opened the taps in an effort to stem the surge in shale production. That set off the worst industry downturn in a generation, forcing cost-cutting companies to focus on higher-margin assets at the expense of older, costlier fields. While OPEC changed course last year and curbed output to boost prices, shale was the main beneficiary and resurgent U.S. output has kept crude below $50.

I do know of at least one small mom-and-pop crude oil producer based out of Ft Worth is in deep trouble for that very reason. Early on, the son of the founder was not concerned, having seen his father experience the boom and bust cycle of the oil industry. He said that this downturn in oil prices was temporary and that things would soon "get back to normal."

Temporary turned out to be longer than expected.

Without question, the big story of the week: Halcon selling all of its operated interests in the Bakken; moving on up (to the Permian).

Of course, the biggest, and saddest non-energy story coming out of the Bakken this past week was the Hedderich's building fire on south Main. Wow, what a sad, sad loss. To some extent, the building was the icon that bridged old Williston with the new Williston.

The Red Queen has not fallen off her treadmill: despite the fact that 45 more were wells taken off-line (shut in) last month, North Dakota is still producing in excess of one million bopd. Production month-over-month was flat (a very slight decrease) despite more than 1,500 wells being shut in and 850 DUCs. It is really quite extraordinary. And for producers, it's not going to cost $20/bbl to bring those 1,500 shut in wells back on line.

Meanwhile, the stock market rally that began on November 9, 2016, continues to run; the Dow finished the week hitting a new record high. And here. The latter link tells me all I need to know about CNBC.

OPEC production hits new record high. It was reported that even Saudi Arabia exceeded its own production cap in June.

For farmers in North Dakota this was huge news: EPA withdraws WOTUS rule.

Miscellaneous
A new batch of photos from Vern Whitten
The blog recorded its 10-millionth page view
Posted by Bruce Oksol at 8:01 AM No comments: