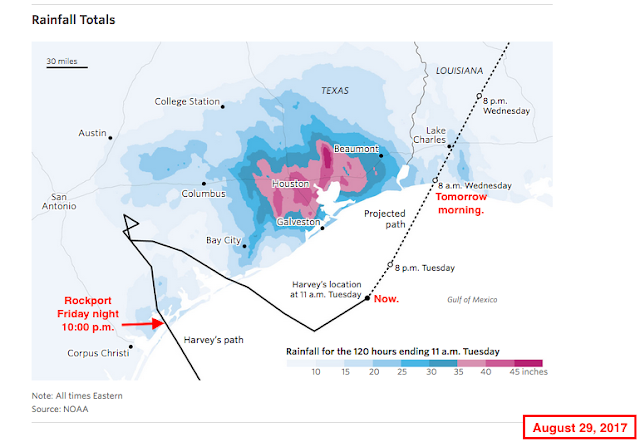 In between the thunderstorms sparked by tropical storm Harvey, it looks like I have a 3-hour window before the next thunderstorm to go biking.

YouTube won't allow this particular video to be embedded, so just the YouTube link: Glen Campbell's Galveston. By the way, the music reminds me of one of the tracks in Tinker, Tailor, Soldier, Spy.

One of my favorite books is The Great Sea, David Abulafia, c. 2011, which I paid full price for in Williston, ND, at "Books on Broadway," my all-time favorite bookstore -- except perhaps second to Powell's in Portland, OR.

With tropical storm Harvey bearing down on us here in Texas, perhaps finding this book in the library today was preordained.

Ironically, the author devotes "Chapter 13" to hurricanes. Yeah, I suppose if I was going to write a book about the Gulf of Mexico, I would include a chapter on hurricanes and place it in chapter thirteen. LOL.

The chapter starts, hopefully not presciently, with a photograph of the devastation of Corpus Christi in 1919. Tropical storm Harvey appears to be making a direct, frontal attack on Corpus Christi with landfall tomorrow (Friday) night or Saturday morning.

According to the author, "hurricane" comes from the Yucatan Maya:


They paid tribute to a no-nonsense, one-legged god named Huracan, the divine source of wind and storms and, appropriately, birth and destruction. Their neighbors to the east and southeast, the Taino and Carib, each had a deity of similar name and disposition. From them the Spanish got a word, huracan, for those incomprehensible tempests they discovered in the New World -- acts of God, as they saw them, that wrecked their ships and settlements.

[Speaking of "wrecked," the new TBS television show "wrecked" is worth watching.]


This is slightly more than five on a yearly average. One-third of them either tracked into the Gul or originated there -- nearly two a year. Two many not sound like a lot, yet imagine Californians contending with the same number of major earthquakes every year in the span of a few months. Gulf states are struck by hurricanes fifteen percent more often than all other US states combined, and coastal dwellers in the eastern and northern Gulf, from Key West to Galveston, have to batten down their homes and flee danger more often than any other Americans.

1957. Hurricane Audrey. 500 lives lost. Near the mouth of the Sabine River, Louisiana. In the nearly 50 years between Audrey and Hurricane Katrina, there was no deadlier Gulf hurricane (than Hurricane Audrey).  The name Audrey was later retired from usage as an identifier for an Atlantic hurrican.


Roughly between Audrey and Katrina, the US coastal population expanded by 70 percent, with the rush to hurricane country the greatest. The Gulf coast population swelled by 150 percent, to fourteen million. The number of housing units soared by 246 percent, double the national increase. Eight of the top ten costliest (adjusted for inlfaiton) hurricanes in the US struck after 2000. Seven were Gulf hurricanes.

So, this weekend we will see. The "talking head" expert on television this morning seemed not particularly concerned.


Have You Ever Seen The Rain, Creedence Clearwater Revival
Posted by Bruce Oksol at 10:07 AM No comments:

The well:
Two additional observations regarding this well now that it has been reported:
Check out this post from August 20, 2017.

The production profile for the newly fracked Three Forks well, #32242:
Some notes about this well from the file report:
For a more in-depth discussion regarding Claystone, see this post.
Posted by Bruce Oksol at 8:42 AM No comments:

Trump "likes": because his tweets get thousands of "likes," a single "like" doesn't move the needle. But this morning, a first forme,

Fun to watch cognitive dissonance: watching Andrew Ross Sorkin on CNBC arguing against more government debt/increased deficit now that the GOP is in control. Under the Dems, he had no problem with government debt/increased deficit. For that matter, where is Nobel laureate Paul Krugman who consistently argued for increased spending under the Obama administration? Haven't heard from him in ages. A reader notes, see first comment:

Wow, wow, wow. Why I love to blog. A couple of days ago a reader sent me to one of the better blogs by Scott Adams. This post will direct you to the link to that story. Scott Adams talks about the "bubble of mass hysteria."

This morning on CNBC, one of the talking heads succumbed to that, and became part of the bubble of mass hysteria when she suggested that in the mid-terms the Dems could make a grand sweep, taking "every" contested race, putting both the US House and the US Senate back into the hands of Schumer and Pelosi. I always thought she was one of the brighter talking heads on CNBC but it's clear ...

But I digress. What I wanted to point out was another story over at CNBC suggesting why Trump's foibles may not be all that helpful for Democrats. It's the kind of story I generally prefer to ignore; preaching to the choir as it were. But a reader sent it to me so I knew there must be a nugget of gold in there somewhere, and indeed there was:


Don Luskin, the CIO of Trend Macrolytics, speculated that Americans succumbed last week to a "clinical case of mass hysteria." He suggested the consternation over Donald Trump's devouring 96 hours of news by issuing three distinct and occasionally contradictory pronouncements about the relative virtue of white supremacist marchers versus violent socialist counter protesters was a media fabrication. "His sin is that he has failed to express his outrage at the event in a particular way," Luskin wrote, "or, more precisely, that he has expressed it in a way that doesn't kowtow to the identity politics lobby."

And the story even quoted the Scott Adams blog which surprised me.

The general tone of the article suggests that this CNBC contributor has also fallen into the bubble of mass hysteria.

OPEC cut (wink, wink) update: via Twitter, Libya and Nigeria (both exempt from the cut) reached 18-month and 4-year (respectively) highs for light sweet oil. WTI futures are down this morning.

Texas is back! From Oil & Gas Journal, the Texas upstream oil and gas economy grew in July for an eighth consecutive month after contracting during the previous 24 straight months. The July expansion reflected sizable year-over-year improvements in the rig count, drilling permits, and the value of Texas-produced crude oil and natural gas, along with renewed industry employment growth. All that hand-wringing over "breakevens" of $65 --


“Oil supplies remain plentiful because domestic producers are becoming increasingly efficient at producing crude oil at lower costs, so a $45/bbl oil market provides more incentive than in the past,” he said. 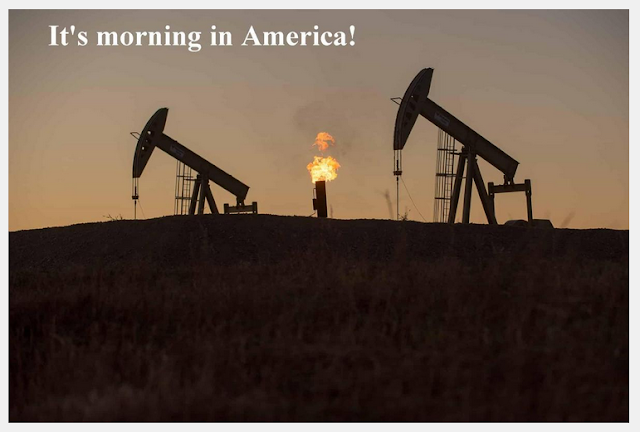 Trending: coal. From Argus Media via Twitter -- Indonesia, Vietnam to enchance coal co-operation.  But look at this: NY Times reporting that US government study hints at future support for coal -- again reported everywhere -- no links -- apparently increasing alarm over stability of the grid.

Trending: Mexico in a world of hurt. Mexican crude production continues to slide; federal revenue dropping at a frightening rate. Stories easily found; no links. Platts is reporting, of course.

For energy investors, the question for the day: is it time to start investing in oil again? Has we turned the corner with regard to the price of oil? If so, where should one invest? Upstream, midstream, downstream? Big Oil? Shale producers? Just idle chatter. I'm posting this so I have something to look back on five years from now.

I don't recall whether the figure was $7 billion or $9 billion. If I had to wager on it, I would say it was $9 billion.

I'm referring to a note by a BHP analyst the other day. The analyst suggested that if the BHP shale portfolio came in at less than $9 billion, the company was going to take a "huge bath." Above $9 billion, perhaps not so bad. It is being reported that BHP spent $20 billion to enter US shale (the Eagle Ford and the Permian) in 2011 -- at the height of the boom -- and is now in the process of exiting US shale where it has not been able to succeed.

The author argues that the decade of the 1850s is the "crucial decade" -- the decade when convergence began.

Convergence is a history of modern science but with a distinctive twist. The twist has been there for all to see, but so far it has not been st out as clearly as it deserves. The argument is that the various disciplines -- despite their very different beginnings, and apparent areas of interest -- have in fact been gradually coming together over the past 150 years ... one interlocking coherent story: the history of the universe.

The story of Mary Somerville, first half of 19th century. Self-trained mathematician. If she were not a woman, she would have been elected to the Royal Society. Wrote five books on science (cosmology, geography, physical sciences, molecular and microscopic science.

Her most important work: On the Connexion of the Physical Sciences (1834). Its aim was to reveal the common bonds -- the links, the convergence -- between the physical sciences at a time when they were otherwise being carved up into separate disciplines.

The author references an ancient concern of Aristotle, called the Ionian Enchantment. Then, in the Middle Ages, Thomas Aquinas attempts to reconcile Aristotle's science and Christianity  in Summa Theologica. Then Newton brings order to the heavens 400 years later. Then, Descartes, Condorcet, and Schelling. The author argues that Mary Sommerville's approach was much more modern in writing about "convergence."

Somerville died at age 92 in 1872. Two years after her death a new all-women college at Oxford was named in her honor, producing its share of no less remarkable figures -- Indira Gandhi, Dorothy Hodgkin, and Margaret Thatcher among them.

For Mary Somerville, the fundamental lesson of Connexion was religious...her own most powerful experiences were with nature and, above all, with mathematics. This was where God showed himself, she believed -- in the purity of mathematics and in the way a few equations united the manifest diversity of the observable world.

And this takes us to just page 13. A most fascinating book.
Posted by Bruce Oksol at 7:03 AM No comments:


The surge in crude oil, natural gas and natural gas liquids (NGL) production in the Permian is driving a massive buildout of midstream infrastructure designed to move the hydrocarbons to end-use markets. On the gas processing front, there are literally dozens of projects announced or in the planning phase that are scheduled to start up over the next two years. Some are small projects aimed at a few producers, while others are set to significantly expand processing capacity and affect large areas of the basin’s gas gathering and transmission network. Today, we discuss Vaquero Midstream’s ambitious Delaware Basin gathering and processing projects.

We last looked at Permian gas gathering and processing infrastructure in Part 3 of our Waha Hub blog series. In that blog, we reviewed the Agua Blanca pipeline and how it fits in with the development of more than 5 Bcf/d of natural gas processing capacity in the basin. Keeping up with the myriad of infrastructure changes taking place in Permian midstream is a challenge, so we never miss a chance to dive deeper into the key projects underway in the basin. Today, we look at another intra-basin pipeline built to aggregate large quantities of gas to Waha: Vaquero’s Lariat pipeline and the associated Caymus processing facility.