The joint venture proposal centers on PdV´s 940,000 b/d CRP complex, once one of the world´s largest and most modern refinery systems. The CRP, located on the Paraguaná Peninsula, consists of the 635,000 b/d Amuay refinery and the 305,000 b/d Cardón refinery, which together are currently processing a third of their combined nameplate capacity, according to a week-old PdV internal report seen by Argus.

Amuay throughput is about 200,000 b/d or 31.4pc of its design capacity, and Cardón is running 110,000 b/d or 36pc of nameplate capacity, the report shows. Faced with dwindling cash flow and mounting arrears on its dollar-denominated debt, PdV appears to be trying to mortgage assets to stay afloat.

How the iPhone X could steal Christmas: story at WSJ. The writer(s) suggest that local retail, brick-and-mortar could have a bad, bad Christmas for three reasons:
It should be noted that:
Amazon will do just fine. Apple will do just fine.
Posted by Bruce Oksol at 6:17 PM No comments:

From a company press release:

At the closing, an initial amount of $300 million was funded - an additional $100 million of delayed draw term loans are available to the Company, subject to the satisfaction of customary conditions.  The new credit facility matures in five years and carries a floating interest rate of LIBOR, plus 7.75%.

The Company used approximately $161 million of the initial proceeds to repay and retire its bank credit facility led by Royal Bank of Canada, which was scheduled to mature in September 2018.

Excess proceeds under the initial draw and additional availability under the new credit facility may be used for general corporate purposes, including, but not limited to, development of the Company's assets in the Williston Basin, future accretive acquisitions, and potential purchases of the Company's outstanding unsecured senior notes and common shares.

Blogging Is Significantly Delayed! -- Please Bear With Me -- November 1, 2017

Those with a paid subscription will have their subscriptions extended for one month because of my delay in blogging. Just too much stuff happening too fast. Comments will be delayed. But I'm here and will gradually catch up.
Posted by Bruce Oksol at 5:18 PM No comments:

This page will not be updated; Tesla Model 3 ramp-up is tracked elsewhere.

EV numbers for October, 2017. It will take a few days for all makes/models to be reported, but as it stands now: 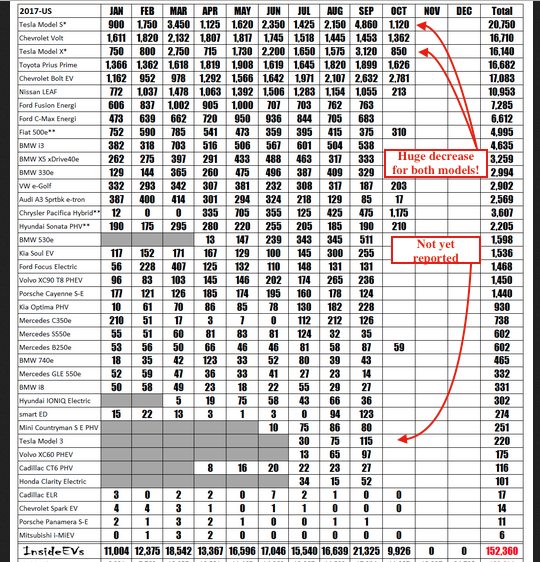 US crude oil inventories decreased by 2.4 million bbls from the previous week, from the weekly petroleum report . Now at 454.9 million bbls. I will wort this out later.

Other data points from the most recent weekly petroleum report:

Later, 8:54 a.m. Central Time: I'm not paying attention, so I could be wrong on this, but I think all three major indices are trading at new highs. Apparently it's a global rally. Some overseas markets are trading at 20-year highs. One has to ask: what was President Obama doing for eight years? The good news: a lot of folks continued accumulating shares of publicly traded companies at cheap prices during the Obama years? Lots of explanations for what's going on, but looking ahead, a lot of folks are looking ahead two months, eager to add to their IRAs as soon as the new year allows them.


Original Post
Flight risk: some sources suggest Manafort is a flight risk. If so, why did he not take a long European vacation some months ago. Apparently he was not paying attention.

Party time: smart, smart move by Walmart. In-store Christmas parties. Walmart will call them "holiday parties," to remain politically correct, but Fortune actually referenced "Christmas" and even put "Christmas" in the headline, something we probably would not have seen under the previous administration.

Dow futures: what changed between yesterday and Monday? Nothing. Except mutual funds were selling their winners, re-balancing their portfolios on Monday and Tuesday. Now, that their winners are a bit lower, they are buying back in and the stock markets are surging in pre-market trading. Of course, this could all change once President Trump starts tweeting. The good news: former president Obama has no speeches scheduled today. I remember all the days during the previous eight years when the market was surging in early trading, an then President Obama made a speech reminding us how awful the country was. Just saying. My worldview. Probably wrong. 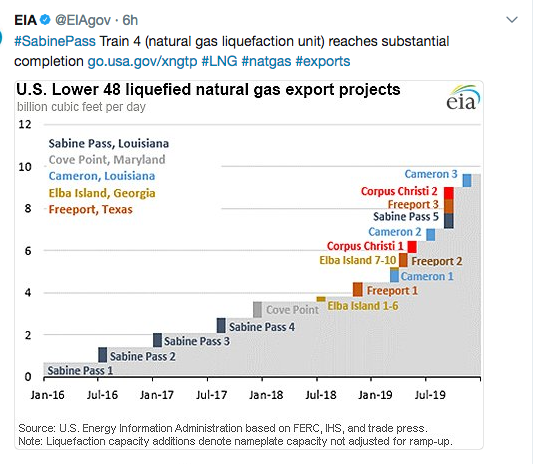 Great, great gift idea for folks with an interest in this sort of thing. This is a huge coffee-table book; beautiful, beautiful photographs. Great bios of the women who brought us so many memories -- those of us who grew up watching "The Wonderful World of Disney" many decades ago. 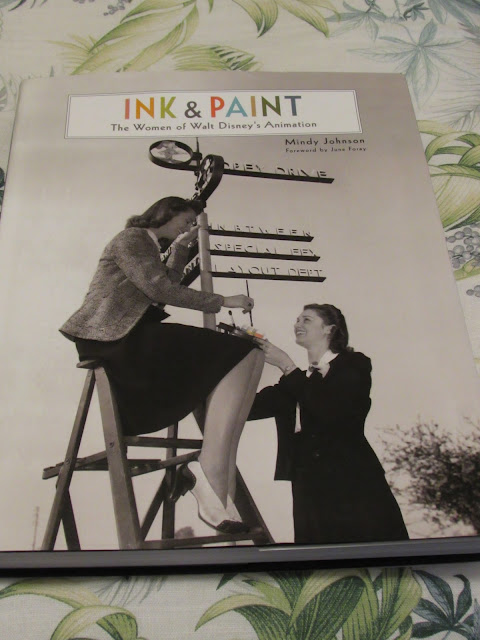 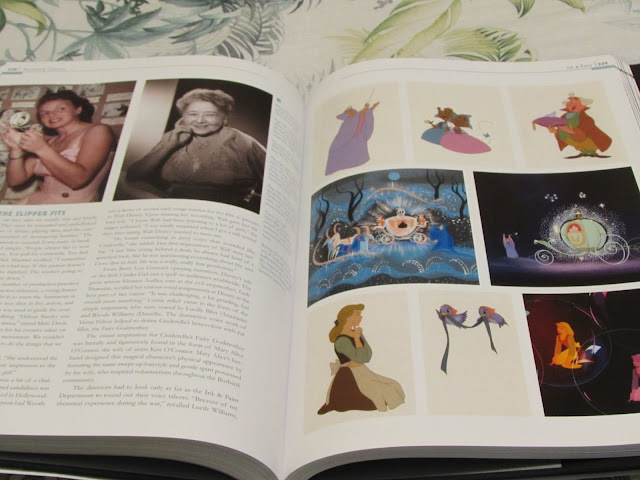 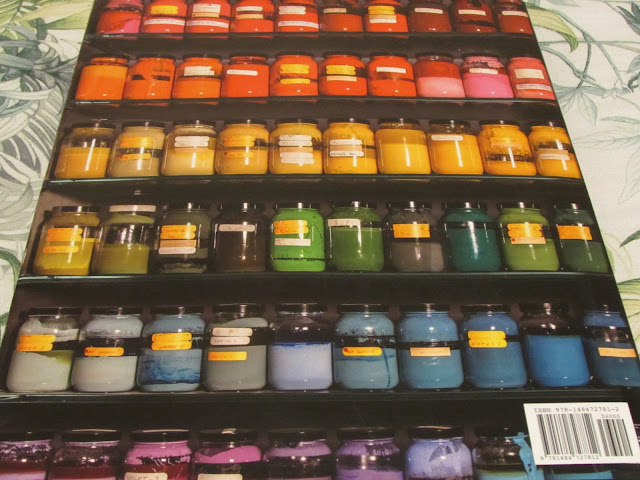 That’s because the per-MMBtu price difference between natural gas prices and NGL prices was low. Very low. In fact, during 2015-16, it was the lowest it’s been over the past decade except for a brief period during the 2009 financial meltdown.

But things are looking up. Thanks to a big boost in from propane and butane prices — and, to a lesser extent, rising ethane and natural gasoline prices — natural gas processing economics look healthier today than they have in years. It is going to get even better as more new ethane-only steam crackers come online.

Given these developments, it is clearly time for another deep dive into what makes gas processing economics work, and how the numbers are about to change. Today, we begin our latest expedition into the wilds of gas processing.

Like the Bakken, I suppose, "social media" never ceases to amaze me. "Walk Away Renee" is "featured" in Three Billboards Outside Ebbing, Missouri. The song struck a chord among many, including the individual who wrote this:


For all the boomers babbling about how "u kids don know dis feel," f*** you. I remember being just a tiny boy in the 90s, riding in the back of my dad's '78 Mercury, listening to the oldies station. I miss that car. I miss my dad the way he was. I miss myself. This song is so much more than some breakup melody. Those violin stings touch me somewhere deep, it's as if this song was about the sorrowful passage of time, and how everything must leave us eventually like some scorned lover. You're not to blame.﻿

Walk Away Renee, The Left Banke

Released in 1996, I would have been about fifteen years old. I never realized then Renee was such an "important" song; it was simply one of my favorite songs at the time (and remains so today). It's very likely I first heard this song in "The Hut" on Main Street just across the street from Central School in Williston. Hard to say.

My dad is about 95 years old, give or take a few years. He is in great physical shape and his mind is as sharp as ever for the things that are important in life. One of the things I most appreciate about him is his use of the "walker." He's used it for many, many years and my hunch is that when he first started using it, he really didn't need it but he knew the seriousness of a broken hip and felt that using a walker early on might prevent a fatal fall. 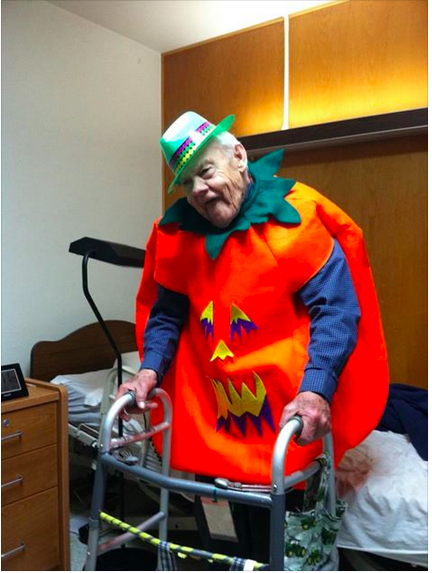 His goal: to live long enough to watch AAPL split 7 - 1 (again). Knowing Dad and knowing Apple, he may reach that goal.
Posted by Bruce Oksol at 6:43 AM No comments:

The Political Page, T+284, November 1, 2017 -- New York Politicians Go Out On Limb Suggesting Most Recent Event Was An Act Of Terror

From a Fox.com editorial:


Yet, New York Mayor Bill de Blasio came right out and said it: “This was an act of terror.”

That was already apparent to the New York City police, whom de Blasio has repeatedly insulted as racists, and demeaned for quickly confronting the dangers of criminal behavior.

That’s right, New Yorkers. Listen to your governor. Don’t take any extra precautions in how you live your lives. Don’t admit that there are evil people in the world who want to kill you, then exhort God’s greatness. Don’t use that ugly word -- war – to describe our conflict with radical Islam. Don’t offend.

What surprised me was how quickly "everyone" called this an "act of terror." Under the previous administration there was a push to end any talk of "terrorist attacks" in this country, and a push to "hold judgment" after any attack, no matter how obvious.

By the way, the "person of interest"  behind the deadly New York City attack had pledged loyalty to the jihadist army.

Surprise, surprise.
Posted by Bruce Oksol at 6:38 AM No comments: 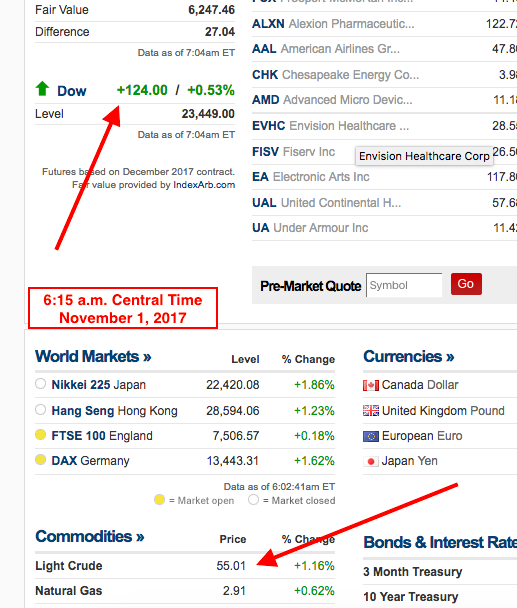 Posted by Bruce Oksol at 6:25 AM No comments: