Colorado is home to the second-biggest field of recoverable natural gas in the United States, according to a new assessment by the U.S. Geological Survey.

It's hard to get pass some paywalls, but the story is appearing everywhere, for example from The AP, and as expected, the article emphasizes the difficulty and expense of getting to this natural gas. It doesn't matter: this is the bottom line -- the US is going to have inexpensive, almost inexhaustible, relatively accessible energy for a long, long time to come.

Once you start adding up "total recoverable reserves" across the US: the Marcellus, the Barnett, the Utica, the Piceance ... after awhile one gets to some serious reserves.


Original Post
A huge "thank you" to a reader for alerting me to this.

The story was posted 22 hours ago. I follow energy news pretty closely. I have a fair number of folks who send me notes on energy, and yet, this story seems to have been missed by almost everyone.

The only reason I think it is not getting national attention is because the numbers are just too hard to believe. Maybe I'm missing something, or misreading something. Maybe I'm being inappropriately exuberant.  This is what makes these stories confusing:
But this seems incredible. Almost beyond one's imagination.

To bring you up to speed, read about the Piceance Basin in western Colorado at this post.

The headline fails to note that the previous USGS assessment was less than 2 trillion cubic feet of natural gas.

The report begins: This is the second-largest assessment of potential shale & tight gas resources that the USGS has ever conducted. [Natural gas: Marcellus was probably the largest?]

This estimate is for undiscovered, technically recoverable resources.

The previous USGS assessment of the Mancos Shale in the Piceance Basin was completed in 2003 as part of a comprehensive assessment of the greater Uinta-Piceance Province, and estimated 1.6 trillion cubic feet of shale natural gas.


The basin has come to increasing public attention in recent years because of widespread drilling to extract natural gas. The primary target of gas development has been the Williams Fork Formation of the Mesaverde Group, of Cretaceous age. The Williams Fork is a several-thousand-foot thick section of shale, sandstone and coal deposited in a coastal plain environment.

The 1.525 trillion bbls of original oil in place (OOIP) almost seems to be a typographical error, but Leigh Price estimated the Bakken to hold 500 billion bbls OOIP and the Bakken is less than a hundred feet thick.

Back to the USGS results posted yesterday:


The Mancos Shale is a significant potential source of natural gas. For comparison, the assessed mean resources in the Mancos Shale of the Piceance Basin are the second-largest assessment of potential continuous gas resources that the USGS has ever conducted.

Since the last USGS assessment, more than 2,000 wells were drilled and completed in one or more intervals within the Mancos Shale of the Piceance Basin. In addition, the USGS Energy Resources Program drilled a research well in the southern Piceance Basin that provided significant new geologic and geochemical data that were used to refine the 2003 assessment.

The Mancos Shale is more than 4000 feet thick in the Piceance Basin, and contains intervals that act as the source rock for shale gas and oil, meaning that the petroleum was generated in the formation.


The Mancos Shale is not the only formation that USGS has reassessed as technology and geologic understanding have advanced.

The Marcellus according to the 2011 USGS survey:

The Barnett according to the 2015 USGS survey:

The Bakken/Three Forks according to the 2013 USGS survey:

The assessments found that the formations contain an estimated mean of 7.4 billion barrels (BBO) of undiscovered, technically recoverable oil. The updated assessment for the Bakken and Three Forks represents a twofold increase over what has previously been thought.

When you go back through this post, and check out the USGS links, remember a couple of other points: 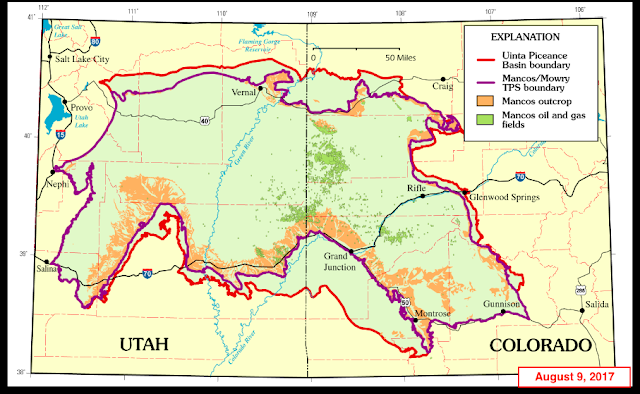