April 18, 2021: speaking of bankruptcy - Hertz is reorganizing in bankruptcy court.

April 18, 2021: from a reader yesterday -- a reader reminded me that "bankruptcy" clearly does not mean "going out of business." Filing for bankruptcy protection almost never results in the demise of that company.

Three of the largest current producers in the Haynesville - Goodrich, Chesapeake and Exco - have gone through bankruptcy in the past few years.

While one may debate the fairness of each of these company's court histories, the fact remains that undergoing a bankruptcy can - and often does - leave a vibrantly productive outfit at the '"at the end of the day."

Comment: I agree completely about the "issue" of bankruptcy.

Good, bad, or indifferent it is a concept that is incredibly important in a free market economy. Absolutely critical. Much could be written. The oil and gas sector may be the most visible simply because it is such a big part of the global economy and more importantly, the nature of a the boom and bust cycle in a very capital-intensive venture. We will definitely see the same in the renewable energy sector -- most likely, more so -- and in some of the high-flying tech names now dominating the CNBC airwaves.

And, oh by the way, government assistance ("bailouts") is not necessarily "wrong" -- GM is a great example. But one wonders if any administration would come to the aid of an XOM or CVX?

Having said that, it says something very interesting about the likes of XOM and CVX to have weathered the most recent one-two punch: the Saudi Surge of 2014 - 2016 followed by the Chinese flu pandemic, 2020 - present.

Hey, speaking of which, as an investor, one of my best investments ever was during the period when Texaco declared bankruptcy decades ago. That "event' taught me a lot about investing. From one side of the coin, I would say Texaco executed their strategy very, very well.

Back to bankruptcy: generally, it seems bankruptcy is "hardest" on investors, creditors, and bankers. All three take calculated risks and generally, if playing their cards correctly, are well diversified and take steps to minimize risk. I would assume most weather the storm fine.
On the other hand, many workers whose livelihood and families depend on that work are still employed while the company goes through the process and are still employed after the company comes out of bankruptcy. The investors, creditors, bankers, in the big scheme of things, have "little" invested in any company that files for bankruptcy; the workers, on the other hand, often have everything "invested" in the company.
The CEOs, CFO, directors on the board? It appears they all do very, very well -- although their portfolio may take a temporary hit.
Rambling on a Sunday morning. Much more could be said, but I will quit here.

The real story is not quite as alarming as the headline would seem to suggest.

Link to Tsvetana Paraskova. Embedded in that article is a link to a PDF that will automatically download. It's an eleven-slide presentation, of which six slides are not part of the presentation per se.

North Dakota: of the 2021 bankruptcies, 1Q21, January - March, only one operator I recognize working in the Bakken: Nine Point Energy Holdings, Inc (I think this is their second rodeo)

Some excerpts from the Haynes and Boone presentation via the linked article:

One begins to wonder about the decline rate for Saudi's onshore wells and the longevity of their large onshore oil fields.

When I saw Parskova's article, the first question I asked: why was Saudi Arabia drilling offshore again?

Saudi never fails to remind us they can get to 12 million+ bbls crude oil / day if they want.

In the past five years, they have come "close" maybe once, and if I recall correctly, they even said they were going to produce 12 million+ bbls but then never did.

It would be interesting to get water flooding data from Saudi Arabia. LOL. Like that will happen.

In case the link breaks, some excerpts:

The world’s largest oil company and biggest oil exporter, Saudi Aramco, has resumed tendering and development work on major offshore oil expansion projects that would give Saudi Arabia another 1.15 million barrels per day (bpd) of production capacity by 2024, Argus reported on Friday, citing a contractor with knowledge of one of the projects.

After the oil price and demand collapse last year, to which Saudi Arabia itself contributed by breaking up the OPEC+ pact for a month, Aramco idled offshore rigs and postponed the start of the expansion of several projects.

Offshore drilling contractors Noble Corporation and Shelf Drilling said in June they had been notified by Saudi Aramco that their rigs offshore the Kingdom would be suspended for up to one year.Now Aramco is moving forward with the postponed start of the development work. The Saudi oil giant has issued tenders for development work at the offshore Zuluf oilfield with a capacity of 825,000 bpd, which is planned to be increased by 600,000 bpd, the contractor told Argus.

Work on the expansion of two other offshore oilfields, Marjan and Berri, had already started at the end of March, Argus notes. The 400,000-bpd Marjan field is set to boost its capacity by 300,000 bpd, and the Berri field, currently with a capacity of 300,000 bpd, will see its production capacity rise by 250,000 bpd by 2023.

And then this, which takes us back to those five discussion points:

Where we stand today: 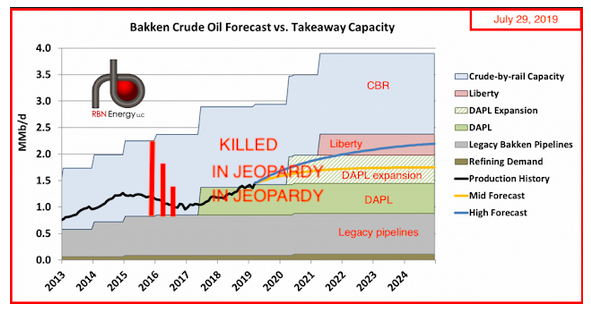 Maybe the "committee" studying whether to bring the JNJ vaccine back to market could also do a DAPL risk-benefit analysis.
Posted by Bruce Oksol at 9:50 AM No comments: