NDSU To Play E. Washington For The FSC Championship, January 5, 2019

For those who may have missed it, NDSU will be playing Eastern Washington for the 2019 FCS Championship.

#3 E. Washington defeated #7 Maine in the other semi-final bracket.

NDSU will be playing E. Washington on January 5, 2019, for the championship. The game will be played in Toyota Stadium, Frisco, TX, just down the road from where we live. But, no, we won't be going.

The Bison aim for their seventh FSC championship in eight years. Link here. 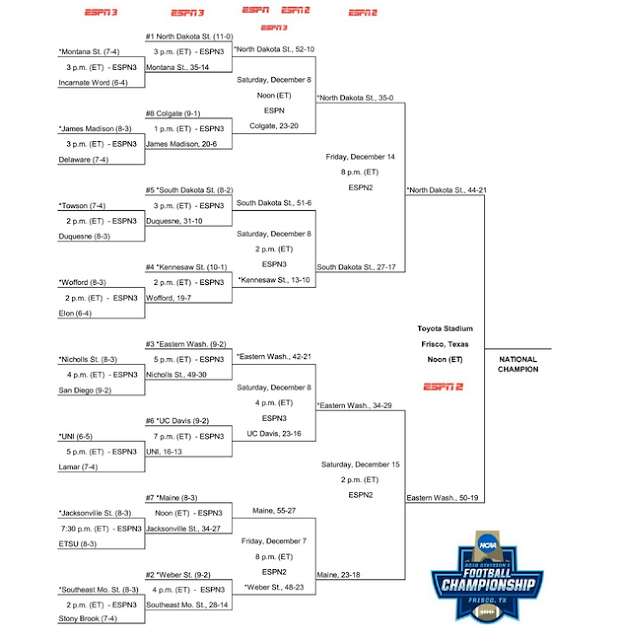 Despite Plummeting Oil Prices, The Number Of Active Rigs Continues To Increase In North Dakota -- December 17, 2018

My dad often talked about the winter of 1936 or thereabouts. Set all kinds of records. He was living in Newell, South Dakota, at the time. He was fourteen years old and he talks about riding with his dad on a four-hour drawn wagon to deliver milk to the dairy.

US shale: hold on to your hats. US shale production will rise to 8.2 million b/d in January -- EIA.


January's expected growth is one of the more robust monthly increases of late.

Over at Zacks via Yahoo!


Bringing in pleasant news for the company, the Federal Energy Regulatory Commission (FERC) recently approved Williams Companies Inc.’s WMB Gateway project, which is an expansion of the firm’s Transco pipeline. Notably, the Transco pipeline delivers almost half of the natural gas consumed in New York and New Jersey.

With the existing Transco pipeline capacity being fully utilized, the expansion will allow additional gas volumes to be delivered to the northeastern markets.

Notably, the company had applied for the Gateway expansion project’s FERC permit in late 2017. Upon the receipt of the required regulatory approvals, the company is scheduled to commence the construction of the project in spring 2019.

The Gateway expansion project is expected to come online by November 2020.

With the Gateway expansion project, Williams will be able to fulfill its commitment to supply an incremental 65,000 dekatherms per day of firm transportation capacity and the mounting natural gas needs of customers in the Northeast during the winters of 2020 to 2021. The project will help provide additional natural gas service to UGI Corporation’s UGI affiliate UGI Energy Services LLC and utility firm Public Service Enterprise Group Inc.’s PEG unit, PSEG Power, LLC.

A quick search of the blog for an RBN Energy blog on the Gateway project was not productive. It's surprising that of all that RBN Energy has written about, I can't find a blog on this project.
Posted by Bruce Oksol at 3:49 PM No comments:

North Dakota sweet oil is down to $25/bbl or thereabouts according to some sources. That was also noted in the most recent Director's Cut.

"Poll" or "survey" at the sidebar at the right was posted the day the Director's Cut came out, asking what readers thought was the "most important" data point.
Posted by Bruce Oksol at 1:43 PM 7 comments:

Qatar certainly has been in the news lately. Previous posts:
Today, Qatar is again in the news, from Rigzone:


Qatar Petroleum (QP) and Eni S.p.A. signed a deal Sunday that will enable QP to acquire a stake in three Eni-operated oil fields in Area 1 in Mexico’s Bay of Campeche.

“We are pleased to sign this agreement, with our valued partner, Eni, to participate in the development and production of oil fields in Mexico,” QP President and CEO Saad Sherida Al-Kaabi, said in his company’s announcement. “This agreement marks another milestone for Qatar Petroleum as it strengthens its international footprint and expands its presence in Mexico.”

Don sent me the link. Thank you. I would have missed this story. I find the data points in this article absolutely fascinating.


The number of new oil and gas projects will rise five-fold next year from a 2015 trough but overall spending is still unlikely to be enough to meet future demand, consultancy Wood Mackenzie said.

Shaken by a sharp drop in oil prices in recent months, boards are generally expected to stick to spending discipline imposed following the 2014 price crash.

Global investment in oil and gas production, known as upstream, is expected to reach around $425 billion next year.

Although spending levels have slightly recovered since then, next year's capital expenditure will still fall short of the $600 billion required to meet demand growth and to offset the natural decline of output from field.

I think folks have been saying this for the past ten years -- that CAPEX would not meet future demands. I'm curious how far out Wood Mackenzie is looking. Certainly, there is no suggestion that supply won't meet demand for the next ten years?

Disclaimer: I am inappropriately exuberant about the US shale revolution. 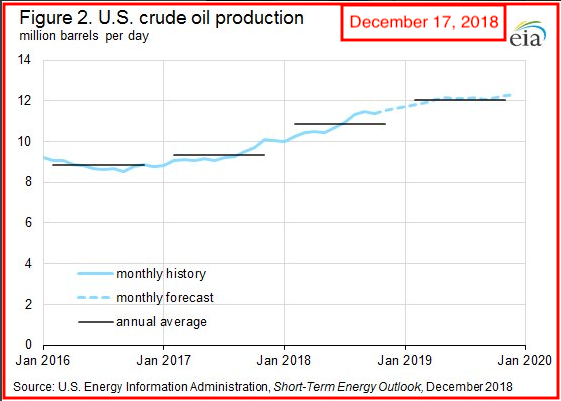 Meanwhile, December, 2018, Rystad update. This is a hard graph to see, but remove the brown (natural gas) and it certainly appears crude oil discoveries are doing relatively fine, although that's i the eye of the beholder, and I won't argue with anyone who disagrees with me. As noted, I am inappropriately exuberant about short-cycle projects, as Chevron calls them. 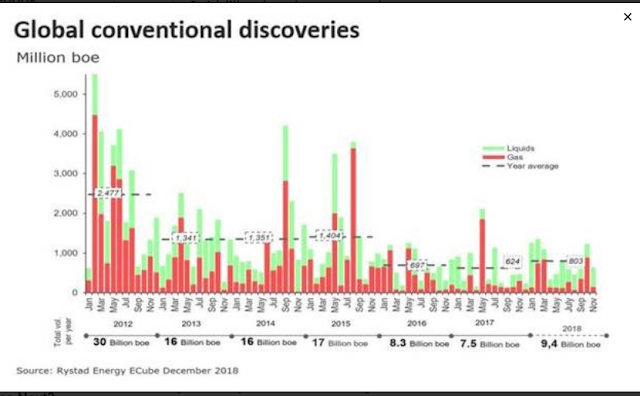 Faux environmentalists in Quebec love their SUVs. In the period from 1990 and to 2017 sales of SUVs, trucks and pick-ups had soared by 246 percent, and sales of gasoline had risen by a third over the period.

The report can be found here. Highlights of the report:

EOG's huge Skaar well on the far east side of the Parshall oil field has been updated with full production profile provide. This is a very short lateral, and has produced over 800,000 bbls of crude oil in about ten years. It has also produced 75,000 boe natural gas in that same time period. Natural gas production is increasing, as expected as the well grows older.

CLR's Pittsburgh wells have been updated. All wells are now completed or on drl status. These are huge wells.

WPX Mandaree wells in Reunion Bay, section 30-150-93, have been updated. These are huge wells. Two wells were particularly huge. #28983 was drilled three years ago; has produced almost 700,000 bbls of oil:
The BR Veeder wells in Blue Buttes have been updated. Some of the Veeder wells have produced over 300,000 bbls in one year:
How does one even begin to calculate break even costs on these wells? Example. Look at the production profile of this well, drilled back in 2011, and not re-fracked, and yet in September, 2017, it was essentially a new well with incredible production; goes from a well producing 1,000 bbls/month to a well producing 12,000 bbls/month, and not re-fracked, according to FracFocus data:

This page will not be updated. Skunk Creek wells are tracked here.

Posted by Bruce Oksol at 9:48 AM No comments:

Wells coming off the confidential list this past weekend, Monday --


Gross production of natural gas in the Niobrara region topped 5 Bcf/d for the fourth consecutive month in November 2018, according to the Energy Information Administration, and it's estimated that regional output this month will hit another record: nearly 5.2 Bcf/d. These production gains, and the concentration of new wells in or near Weld County, CO — the epicenter of the Niobrara’s Denver-Julesburg Basin — are straining the ability of existing gas processing plants to keep up, and spurring the rapid development of new processing capacity. The scale of the build-out in the D-J is impressive: some 2.7 Bcf/d in new cryogenic plants are either under construction or in various stages of pre-construction planning in northeastern Colorado. Today, we continue our review of Rockies crude oil, gas and NGL production and infrastructure, this time focusing on gas-processing needs in the sky-high D-J.

Previously we discussed the Niobrara’s geography and hydrocarbon production history. By our assessment, the play includes the D-J Basin and the Powder River Basin (PRB), with the heart of PRB in northeastern Wyoming and the D-J taking up much of northeastern Colorado and part of southeastern Wyoming. The Niobrara has been producing oil and gas for more than a century. Total production of natural gas took off there in the late 1990s and early 2000s, and production held relatively steady through most of the 2010s at between 4.3 Bcf/d and 4.9 Bcf/d, breaching the 5-Bcf/d mark only once (in January 2012) until this past August; since then, production has ratcheted up month by month, hitting a record 5.15 Bcf/d in November.

As for crude oil, production in the D-J Basin and PRB took off during the Shale Era, soaring from less than 140 Mb/d in January 2010 to a peak of nearly 500 Mb/d in April 2015. Drilling activity and production sagged with crude prices in 2014-16, and by January 2017, the play’s oil output was down to just a hair above 400 Mb/d. Since then, though, it’s been on a tear — up to 664 Mb/d as of November, again according to EIA. The agency doesn’t specifically track NGL production in the Niobrara, but its data show NGL output rising generally in the Rockies — Petroleum Administration for Defense District (PADD) 4 — by one-third since 2013, with a substantial portion of those gains.