May 14, 2016: breaking news last night was the 60-day state of emergency declared by the Venezuelan president. This morning, front page of The WSJ: US sees growing risk of coup in Venezuela.

Now we know why the president declared the 60-day state of emergency. It was the one thing I failed to mention below. Oh well. No one is correct 100% of the time. Even Rush admits to being correct only 99.7% of the time (and "right" 100% of the time -- badda-bing).


Venezuela is descending into a deepening crisis that could end in violence, including the possibility of a coup against that country’s embattled leftist government, senior U.S. intelligence officials said Friday.

There is a “potential for real violence,” one of two officials said in a briefing with a small group of reporters. “It’s hard for me to see how this ends easily.”

The officials, who have extensive experience in the region, said that they and others in the intelligence community increasingly believe that President Nicolás Maduro could be removed from office, either in a “palace coup” led by associates close to him or in a military uprising. They said that the possibility of an overthrow or street violence is of concern to American officials, who want to avoid anarchy in an oil-rich country just a three-hour flight from Miami.

“The goal is to mitigate the crisis that they’re experiencing,” said the official. “It’s in the United States’ interest that Venezuela not bottom out.”

He said, however, that Washington’s options are limited because of Mr. Maduro’s antipathy toward the U.S., which he frequently blames for orchestrating “an economic war” designed to destabilize his government.

I assume the president declared a state of emergency to allow the military carte blanche to put down anti-government demonstrations, protests, and other acts of civil disobedience. From what I can tell, not much else can be done. Nationalizing anything that isn't already nationalized might be part of the plan but it won't solve any problems. It also permits the government to make sure that essential government personnel (military personnel, police forces) remain on the job.

The biggest story this past week was the "announcement" that global energy consumption will increase by almost 50% (48% was the actual number) over the next thirty years. That is absolutely phenomenal.

It's hard to read but it appears that energy consumption per the graph below: 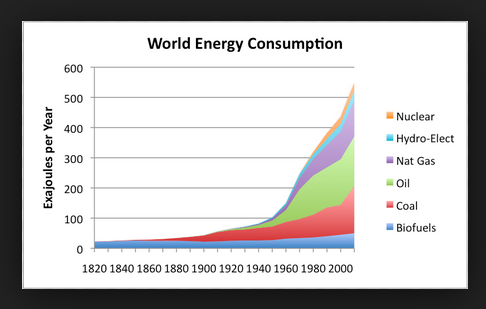 Although the rate of growth over the next thirty years (at 48%) is significantly less than 83% over the past 30 years, the actual increase in exajoules is 265 exajoules/year more than currently used, and 265 exajoules is almost the total amount of energy consumed in 1980.

In other words, by the time your grandchildren are young adults, the world will be consuming as much energy as it is today plus the same amount of total global energy that was consumed in the 1970s.

By the way, a slight digression: when did the slope of the line begin to move practically straight up? Right after 1950, right after WWII. Energy growth was essentially flat from 1820 to 1930.

The numbers were run some years ago, and it was clear there is not enough surface area globally for wind/solar to make much difference, and in the graph above, wind and solar are so minimal they are not even reflected, so let's get the wind / solar discussion out of the way now.

Nuclear is dead for at least another ten years, which means another 20 years before any meaningful change in a nuclear contribution (and even when nuclear was a player, look how slim the "orange" slice is in the graphic below).

So, that gets us back to coal, oil, and natural gas.

For all the natural gas that has been discovered in past couple of years, look how little changed the consumption of natural gas has been for several decades. I think it's amazing how thick the "green seam" -- oil -- is. And it's my understanding that within the next twenty years, maybe ten years, Saudi Arabia becomes a net importer of oil.

The second biggest story was the "announcement" that oil discoveries are at a 60-year low.

Maybe I'm wrong, but it doesn't seem like it takes a rocket scientist to tell us the 2020 - 2030 decade, from an energy standpoint, is going to be a fascinating decade.

Trump
Trump to speak at Bismarck oil and gas conference

Note: in a long table like this, there are bound to be typographical and factual errors. I am posting this for my own benefit; I do not encourage others to pay much attention to it if it's important to them. If this data is important to you, go to the source (the NDIC).  Whether every last data point is accurate or not does not concern me; I am interested in getting an idea of what is going on in the Bakken, nothing more, nothing less.

The table below reflects data for the past three months of data, January, 2016, through March, 2016.

The first table is ordered from greatest to least, the amount of oil per well per the entire month of March (second to last column).

In a long list like this there are likely to be typographical and factual errors. I have cross-checked a couple columns but not all of them. I will do some more checking later on and make corrections as needed.

The total North Dakota crude oil production was essentially unchanged month-over-month, February, 2016, through March, 2016, despite the fact that very, very few new wells were completed in the past month.

So, how is that possible? When you run down the table, pay attention to the number of wells in each field, and take a field, for example, Long Creek. In both February and March it had the same number of wells. I did not check but I would bet a six pack that there were no new wells in Long Creek in March; these are the same wells as in February. But note the 20% increase in well production in Long Creek. Interesting, huh? Again, I haven't double-checked the numbers but I'm pretty sure most are correct.

Another example is Bear Den: the number of wells did not change (44), and yet production increased 22% month-over-month, December, 2015, to January, 2016; increased 17% the following reporting period, and then increased another 12% this most recent reporting period. And these are probably the same 44 wells for the past several months.

For each month there are four columns.
Some squares are blank because I did not capture the date that month. I have no idea why the grid lines did not show up in some cases.

These are the top 20 oil fields based on total field production (arranged greatest to least) for March, 2016: the fourth to last column. Compare the number of wells in the top four producing fields. Note Spotted Horn field with only 72 wells vs the Sanish with 600 wells (and, yes, I just went back and checked the Spotted Horn data for March, 2016):