However, in the August, 2019, NDIC hearing dockets:

Reminder: that's a case, not a permit.

It's been said that operators won't drill wells in the Bakken if the EUR is not at least one million bbls.

Back of the envelope ciphering:

Each well with  infrastructure, etc: $10 million/well (wells are now costing about $6 million to drill/complete).

Norway's wealth fund to dump Big Oil. Never mind. From Bloomberg. Apparently it depends on the definition of "Big Oil" and "dump."

That which does not kill us: except for investors, and maybe the 300 folks laid off, I'm not entirely convinced the surprising -- very, very surprising -- announcement that instead of earning 30 cents / share in 2Q19; Whiting lost 28 cents / share was really all that bad. A wake-up all. I am convinced that of the plays and opportunities Whiting has, their best bet is the Bakken. Everything else is secondary.

Best tweet of the week, supports one of the themes of this blog and the Bakken shale revolution -- weekly rig counts don't matter (don't take that out of context). To wit: 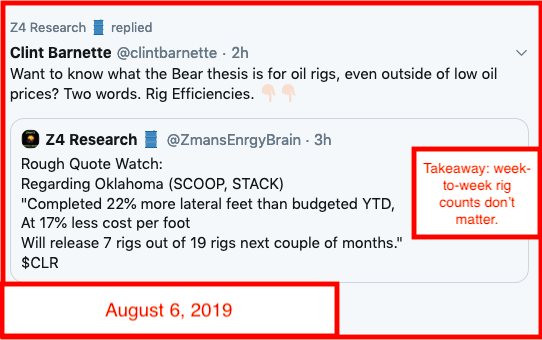 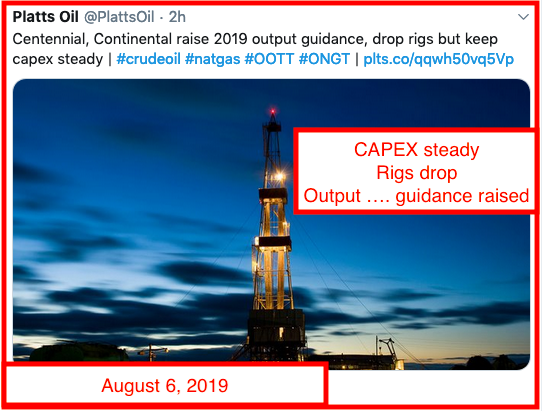 Best Greek restaurant in the DFW area. Cafe Medi. 420 Grapevine Hwy #101AHurst, Texas 76054. Ambience? Old school. I thought I was in Greece. And yes, I've been to Greece so I can say that. I was also stationed in eastern Turkey for two years so I have a few benchmarks. I love the B.Y.O.B. concept. I have a surprise for my wife this Friday when we return.

Cool job: one of the coolest jobs I had during my high school days -- I spent one summer with the local public health department identifying mosquito populations. I would take a dozen or so test tubes with a cotton ball at the bottom bathed in ether and go into some local swamp, riparian biome, or grass field. I would stand motionless in short-sleeved shirts until a mosquito alighted on my arm. I would then calmly and carefully invert one of the ether-filled test tubes over the mosquito. One could not damage the mosquito because identification depended on an undamaged specimen. I don't recall everything about identifying a mosquito but I seem to recall bands or stripes on their legs as one of their main identifying features.

Interestingly enough, I do not recall any problem with bites or itches or equine encephalitis though I sustained dozens of bites. I don't recall West Nile virus as a problem back then. Well, duh. From a quick google search --


West Nile virus was first identified in 1937 in Uganda in eastern Africa. It was first discovered in the United States in the summer of 1999 in New York. Since then, the virus has spread throughout the US. Researchers believe West Nile virus is spread when a mosquito bites an infected bird and then bites a person.

One of the individuals in the photo below could have been me fifty (?) years ago. 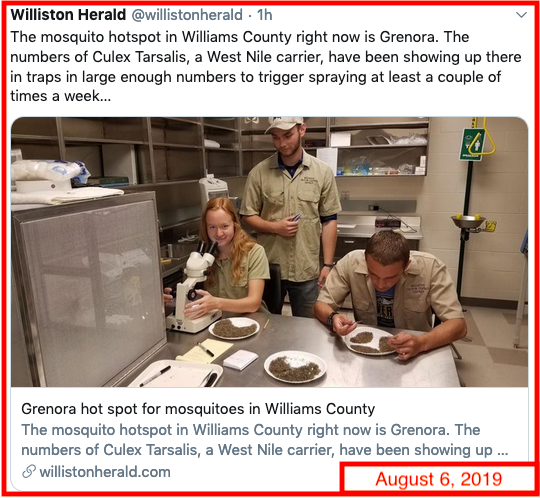 Strait-jacketed: with multiple navies in the "gulf," the strait is gonna get very congested. The
Iranian Revolutionary Guard appears to control the Strait of Hormuz right now. Currently in place or likely to show up:
With 23 speedboats the Iranians appear to be getting the best bang for their naval buck. The Iranian speedboat is to the strait what the Toyota pickup was for the desert-bound ISIS.

Whew! The headline: "2020 sweepstakes: Dem candidates compete to give away billions in taxpayer dollars." Whew! As long as they're talking "billions" and not "trillions" Jamie Dimon and Warren Buffett have nothing to worry about.

Tariffs: President Trump probably missed school the week they were learning about the Stamp Act of 1765.

Top stories for this week won't be hard to find.

Top US non-energy story of the week: President Trump signs agreement allowing more beef into EU; of the 45,000 tons of non-hormone treated beef allowed into the EU every year, the US will supply 35,000 tons. This is a huge, huge story. Ranchers can turn on a dime. Anticipating this, or reacting to this, ranchers can immediately stop injecting hormones into export-bound cattle. Meanwhile, US demand for beef continues on its merry way.


U.S. Trade Representative Robert Lighthizer signed the deal one day after the latest round of trade negotiations between the U.S. and China failed to reach an agreement. Mr. Trump responded with a threat to impose a 10% tariff next month on $300 billion in Chinese goods. Many of Mr. Trump’s top advisers opposed the move.

The U.S. and the EU reached the agreement, which allows more U.S. beef into the bloc, in June. The deal was subsequently approved by member states in July. Of the 45,000 tons of non-hormone treated beef allowed into the EU every year, the U.S. will now supply 35,000 tons. The 45,000-ton quota was set in 2009.

Soybeans: meanwhile, US tariff income is being sent directly to soybean farmers. There's a reason we're not hearing much from the farmers this year.

On his way to El Paso. Which tells me that Texas is in play for the 2020 presidential election.

Death penalty: I'm not reading the mainstream media, so I may be missing something, but I haven't heard (m)any folks wanting something less than the death penalty for the individual responsible for the hate crime that resulted in 20+ dead; many more injured.


Rising U.S. production of NGLs and so-called “purity products” like ethane and propane, as well as growth in steam cracker capacity and NGL and ethylene exports, are giving added importance to NGL and ethylene storage capacity in underground salt caverns along the Gulf Coast. Mont Belvieu, TX, has long been the epicenter of both fractionation and salt-cavern NGL storage — and it will remain so — but there are other areas along the Texas coast with frac capacity and NGL storage, as well as steam crackers and export docks. The questions now are, is there enough in the right locations, and can what’s stored there be received and quickly sent out? Today, we begin a look at existing and planned NGL storage facilities along the Texas coast that are not in Mont Belvieu.

Increased production of crude oil and natural gas in a number of major U.S. shale plays has resulted in higher and higher production of mixed NGLs — also known as y-grade. We have chronicled these gains in a number of RBN blogs, where we noted that in 2019, produced volumes of NGLs (not counting ethane that is “rejected” into natural gas) are approaching 5 MMb/d — roughly double their level back in 2012 — and production is expected to increase by another 1 MMb/d by the mid-2020s.